The Marina, St Leonards was built in 1829 as part of the new town of St Leonards-on-Sea. For 146 years, 43 Marina was the home of Addison’s, the town’s oldest established bakers and confectioners. Addison’s advertised itself as ‘a connoisseur of exotic food’, supplying the upper class market of Victorian St Leonards and in later years the large American export market, until the last member of the family, K. E. Addison, retired.

In 1975 the property was sold and became Mr Cherry’s Wine Bar,  opened by TV star, David Lloyd Meredith, of Softly, Softly fame. It got off to a good start, supported by the Hastings branch of the Campaign for Real Ale, which had been formed in the Prince Albert, Cornwallis Street. CAMRA used Mr Cherry’s for branch meetings and the pub quickly became established for its real ale and as one of the town’s best known ‘pub rock’ venues. In 1976 it celebrated its first birthday with optimism and was listed in the CAMRA Good Beer Guide.

In 1983 a micro-brewery was installed in the basement, the home of Addison’s bakery, and started brewing Conqueror Bitter. Because of its strength (it had a gravity of 10.66) it was sold only in half pints. This was the first micro-brewery in Hastings in modern times, two years before the FILO brewery opened in 1985, although the FILO brewery is still operating. Subsequently, Mr Cherry’s was listed in the Good Beer Guide from 1983 to 1986.

In 1983 the Hastings’ Jack in the Green festival was revived on May Day, after an absence of  three-quarters of a century. The route of the procession in the first few years visited St Leonards Gardens, behind Mr Cherry’s, (where the original 19th century Jack in the Green celebrations took place) and refreshment was taken in Mr Cherry’s by revellers dressed as trees, before they marched back to the Stade. 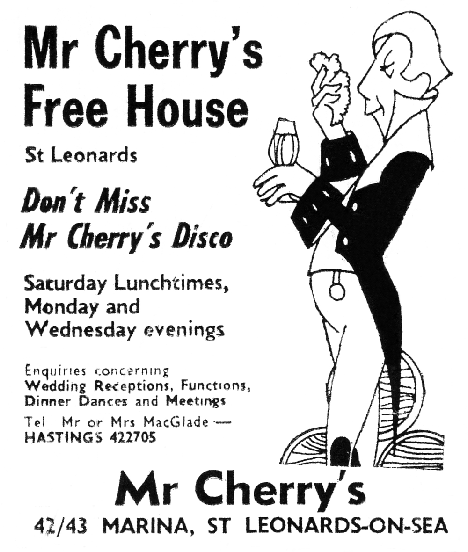 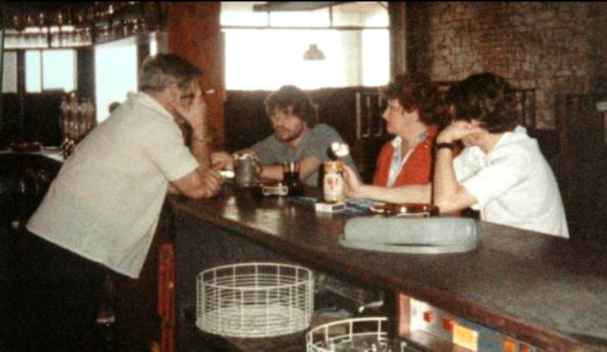 In 1988 the magistrates refused to renew Mr Cherry’s music licence due to complaints about noise. A few weeks after this decision, the pub suddenly closed and then reopened as the ‘James Burton’, with the promise of strict noise control for the benefit of the middle aged and elderly residents in the area.

After a steady start and a new music licence, the James Burton spiralled into a tumultuous existence, with a continuous conflict between the licensees, the Marine Court Residents Association, the licensing magistrates and Hastings Borough Council. It acquired the nickname of ‘the hash joint’ and there were continuous complaints of a ‘hooligan element, injuries to off-duty police, noise, loud music, a riff-raff occupying the front pavement, drugs, motor bikes and general mayhem in the evenings’. It seems however, that these complaints were only half accurate and certainly exaggerated.

A few doors along the Marina, a blue plaque informs us that the Crown House at number 57 was the first building in St Leonards-on-Sea. It was built in 1828 as the first residence of James Burton.

Today we tend to think that prefabrication is a modern idea but surprisingly Crown House was prefabricated in London and transported by boat via the Thames and the sea to St Leonards where it was unloaded onto the beach and erected opposite St Leonards Pier, since demolished.

In 1950 it was still in a dilapidated state but a preservation order was refused until 1952 when the Council gave its private owner, who also owned other bomb damaged property in White Rock and Regency Mansions, three months to repair or demolish the building. The building was finally repaired in August of that year.

In 1953–1954 it was re-occupied and became a local office of the National Assistance Board until the 1960s. It then became the Tudor Rose Social Club.

In the early 1970s the social club was taken over by a ‘consortium’ of employees from the Ponswood industrial estate who later purchased the lease of the Golden Hind, Havelock Street. It became the Crown House pub around 2002 but closed soon after. It re-opened in 2011 but closed again in 2012. 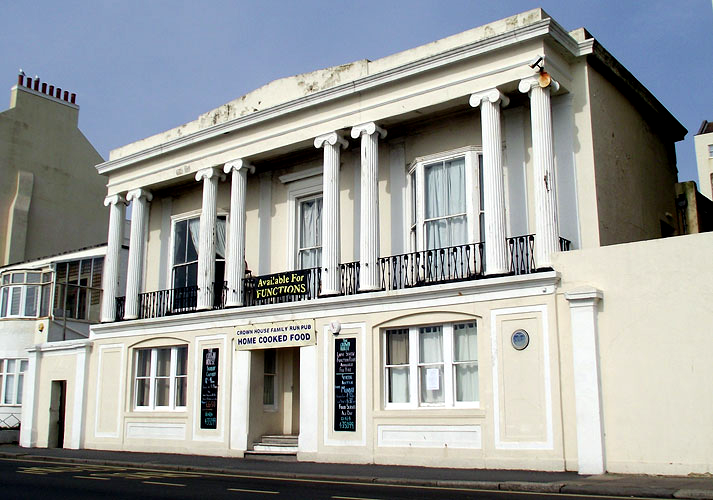 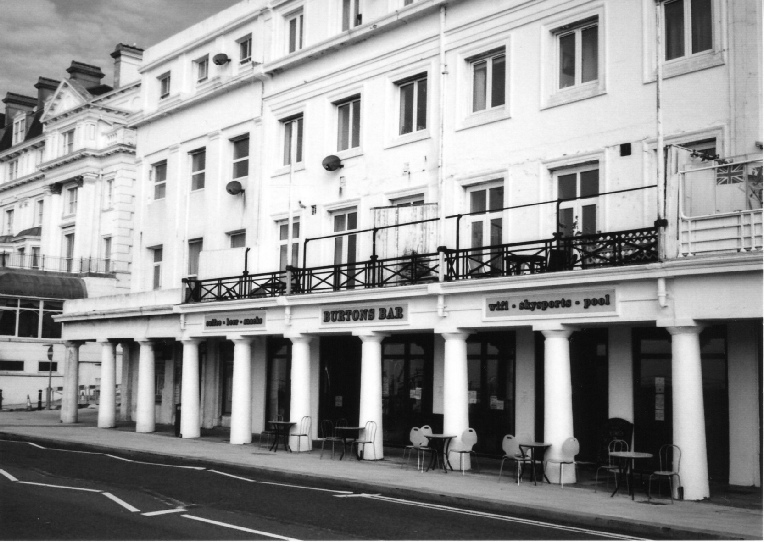 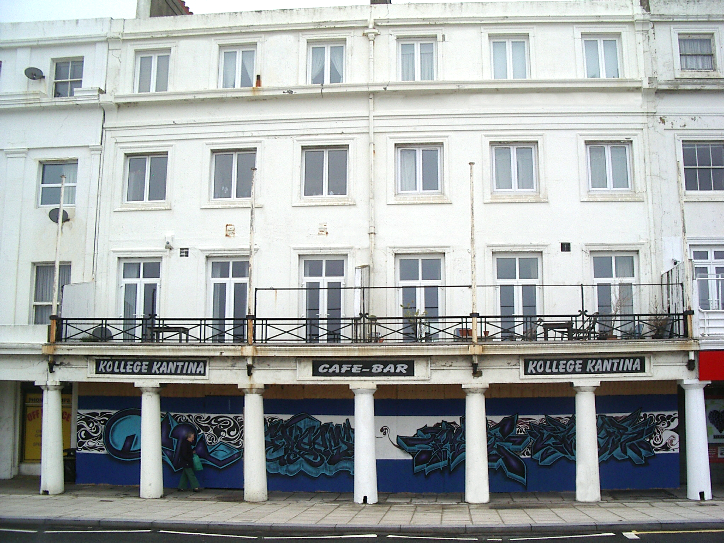 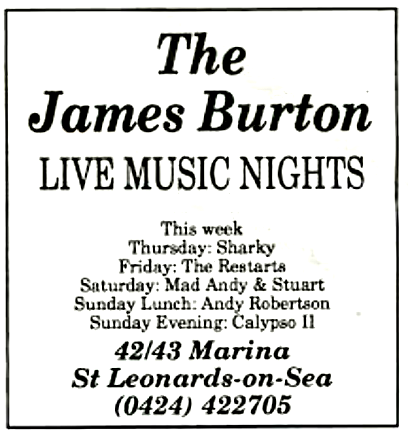 From 1975 until 1990 many popular bands and musicians from Hastings and elsewhere played here. Roger Carey’s Upstarts, Buick 6 and Pass the Cat, three popular Hastings groups, performed here, as did the Liane Carroll Big Band and the 18-piece Sounds of Swing. Among the musicians from outside the town were Howlin Wilf and the Vee-Jays, known for their album ‘Blue Men Sing the Whites’.

Once more the renewal of the music licence was refused and six months after the closure of Mr Cherry’s the James Burton was served with a Noise Abatement Notice, but the music continued. Eventually the two joint licensees were each fined £2,000 plus £2,500 costs, although they had spent £8,000 insulating the proposed Burton Club in the basement. In 1990, after a heady two years, the pub suddenly closed for a second time.

The closure was of concern to the Hastings pub rock community with fewer venues available to them. They started to organise, and the Hastings Live Music Forum was set up in 1993. It was chaired by Phil Little, drummer with the Pullbacks, and began to lobby for more venues. In 1994 another pub music venue, the Carlisle, which had been threatened with closure, was reprieved. A second pub music venue, Pissarro’s, opened at the same time.

The local press reported the James Burton as ‘Gone For a Burton’ and with the licensees bankrupt, the business went into receivership. In 1994 it was put up for sale, but it was not until 2003 that it reopened as Kollege Kantina, which ran for four years and was popular with students from the college in Archery Road. Kollege Kantina closed in 2007 but then reopened in 2008 as Burton’s Bar. In 2009 it was renamed Barrattinis’s Sports Bar but finally closed as a pub in 2012. 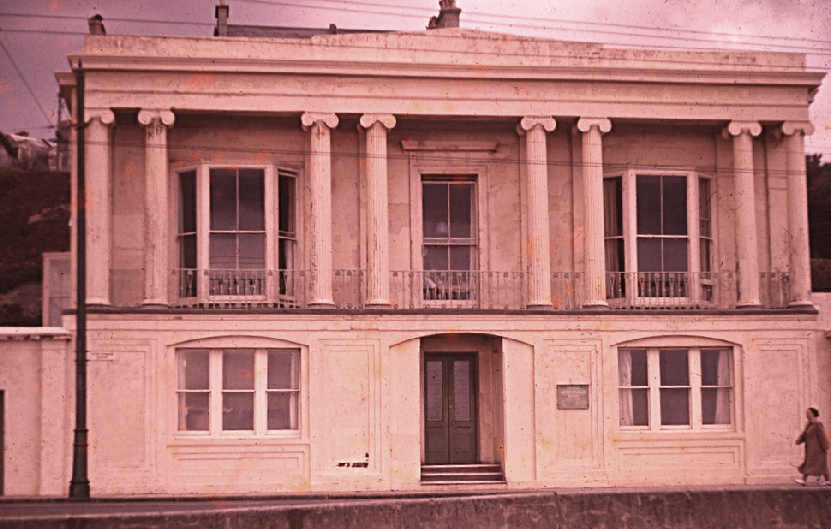 By the 1930s it was known as the Crown House Private Hotel but in the Second World War, between August 1940 and July 1944, the building  was bombed five times, and in 1949 it was reported to be ‘in a severe state of repair’. The lead flashing and gutters had been stolen and the roof was in a shocking condition. Composite roofing put on during the war had perished and the original 13 foot chimney was leaning and dangerous. Hastings Council debated its future and at one time considered it as a possible museum of the Regency and Victorian periods. They asked the Minister for Town and Country Planning to ‘remove this Regency Villa from the scope of the Development Order for the Marina’. 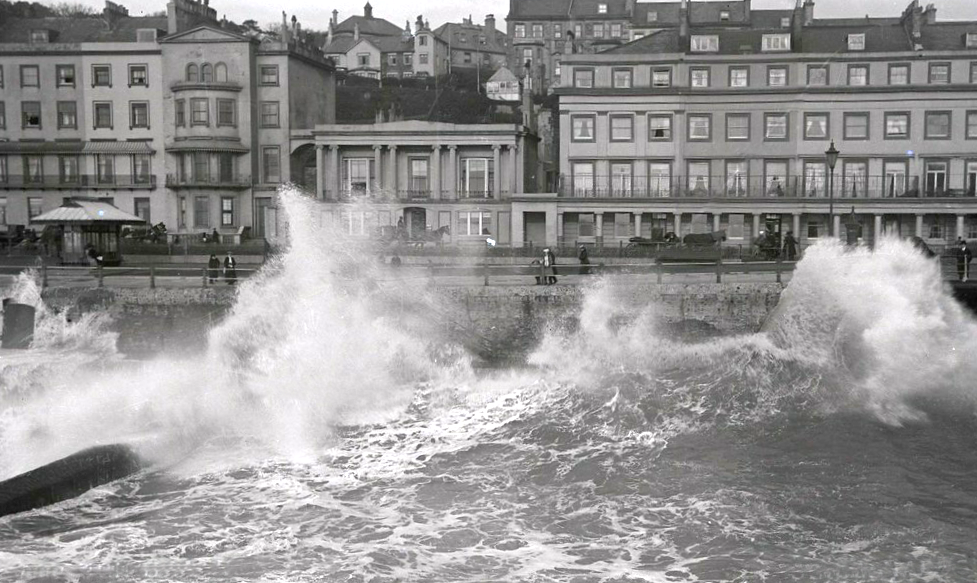 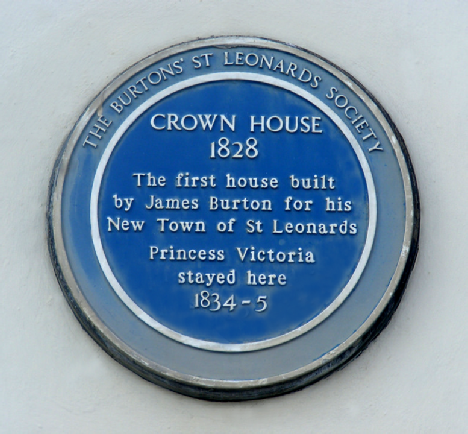 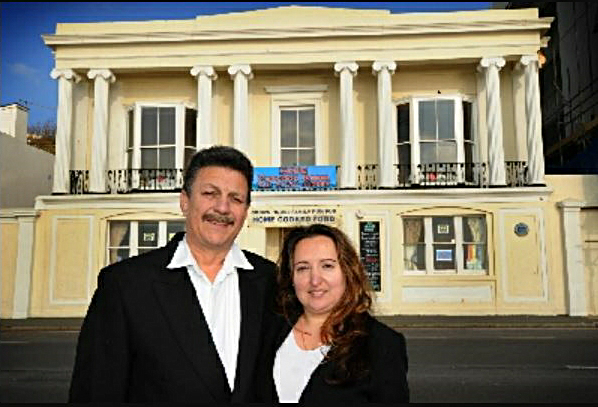