The Brass Monkey first opened as the Provincial Hotel in 1867. In the 1880s Hastings advertised itself as a ‘health resort’ and the Provincial catered for invalids. It was the town’s main hire centre for bath chairs with stalls for 21 bath chairs and a public bar popular with bath chair men. 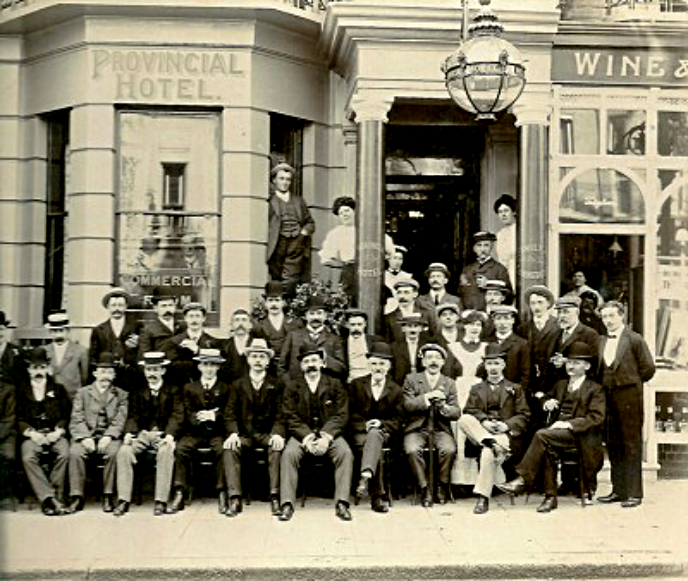 On the outbreak of the First World War the hotel provided barracks and a mess for members of the Royal Sussex regiment.

By the 1960s it was only one of two Hastings’ pubs with a chess team and by 1970 it had closed, but then reopened in 1977 as the Golden Hind. In 2010 landlord Julian Deeprose recalled his time there.

“I was licensee of the Golden Hind from 1977 to 1979 and of the Carlisle from 1987 to 1990. The history of the Golden Hind, as I remember it, was that it used to be the Provincial Hotel for many years which finally closed in the late 60s. The building became derelict and was bought for next to nothing by Jimmy Demetris, who owned many Old Town properties many of them restaurants, including the Mayfair at the end of Pelham Crescent, where the family lived. He used to give some pretty seedy characters a place to live, in return for them working for him renovating properties. The Provincial was one of these and they only ever finished the ground floor and part of the first floor. He then gave the pub to his sons to run, the older son, Steve, being responsible for the opening of the Golden Hind and for inventing the persona of the pub. The younger son Akis was the ‘accountant’. 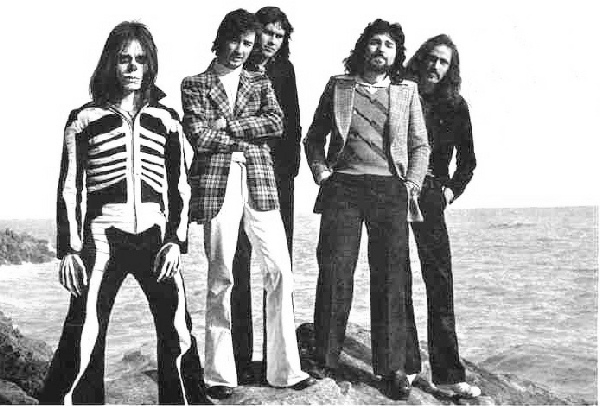 “It opened around 1976 or 1977 and was a disco bar in the back and a lounge bar in the front. Steve Demetris had another career as a musician and he quickly tired of being the face of the Golden Hind and left it to various bar staff to run.

“Disaster ensued”, continued Julian. “I had always fancied being a publican and had been working part-time in the pub. I told him of my ambition and he literally handed me over the keys. I was 19 years old at the time. We had a bit of a task assuring the magistrates that a 19-year-old could run a very busy and successful pub in the town centre, but I mollified them by holding a joint licence with Steve for the first year. I think I am the youngest licensee in Hastings to this day.

“It really was tremendously successful and as the real ale renaissance was just starting, and I had a huge interest in this, I quickly turned the front bar into a haven for beer enthusiasts, which proved very successful. As did the pub games I introduced into the back bar for the early part of the week. We ended up with winning darts, shove penny and soccer teams as well as the disco, packing both bars at the weekends, with excellent local DJs like Tony Davies and Johnny Francis. Great times. 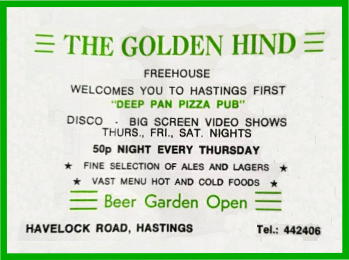 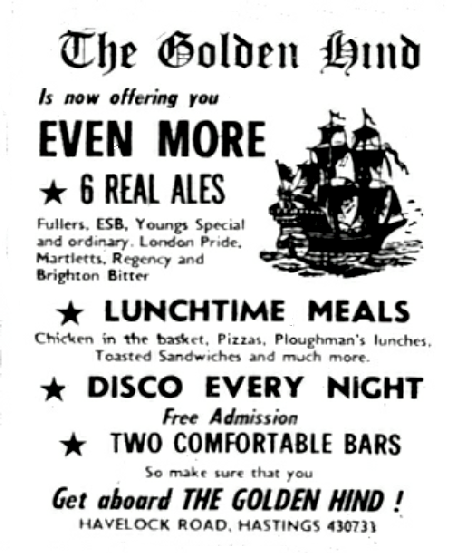 “Eventually Steve received an offer he couldn’t refuse from a consortium of chaps who worked on the Ponswood Estate. They already ran the Crown House social club and wanted to expand.. Steve, by this time, was never seen. I only used to see Akis once every so often when he came to collect the cash. The frontman/woman were Howard and Diane Haskell and in the background were Phil Bebb and John Wilkinson. Steve ensured that they kept me on. I worked for them for a couple of years before leaving to join Martlet Brewery as their free trade rep. “Since then the pub has been totally ripped out inside. The Golden Hind was very much using the old Provincial interior, including some wonderful wooden panelling in the back bar; unfortunately long since gone.

“The local Citizens Band Radio (the Bluebeard Breakers) used to meet in the Golden Hind and did indeed operate from the pub. A ‘breaker’ is American CB slang for somebody breaking the silence—as simple as that. In typical CB fashion they nicknamed the Golden Hind: ‘The Bluebeard’, as Steve Demetris had a very dark beard. The name stuck and after he sold the pub to Howard Haskell et al I arranged for the production of a Royal Wedding ale known as Bluebeard in 1981. I signed some labels as did Howard, and there was also a run of unsigned but numbered bottles.

“The beer was brewed by Martlet of Eastbourne and the Golden Hind had its own draught version on sale at all times—one of the first if not the first house beer! “As far as I am aware Bluebeard Bitter was the first beer brewed especially for a pub in the real ale renaissance—it was actually a mix of Martlet Regency Bitter and Brighton Special Bitter, which was extra dry hopped and had a character all of its own. It was not a standard beer sold under another name.” 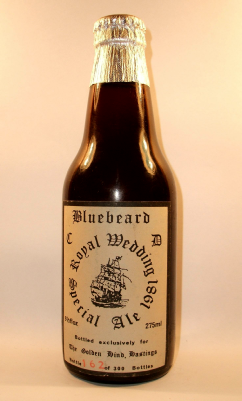 The Golden Hind later became Rockwells. Today it is known as the Brass Monkey. 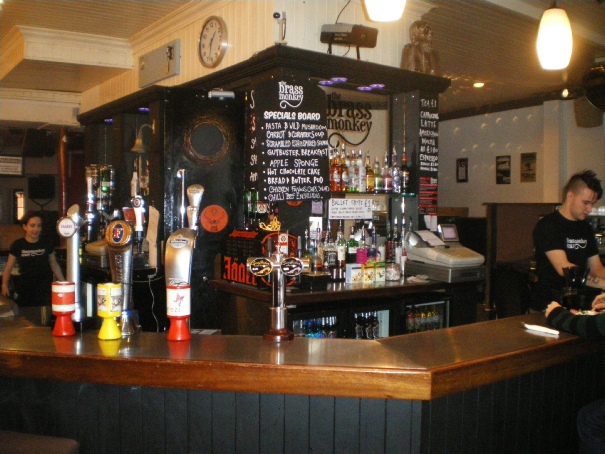 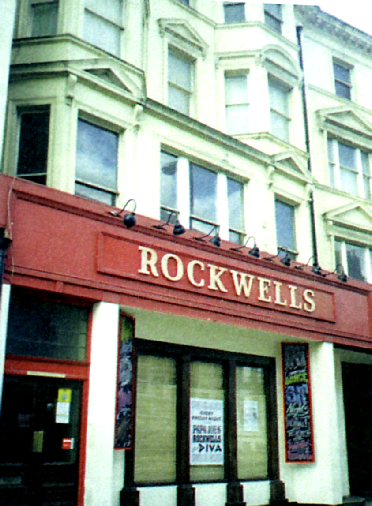 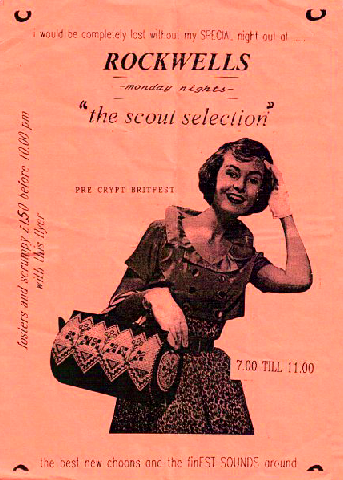 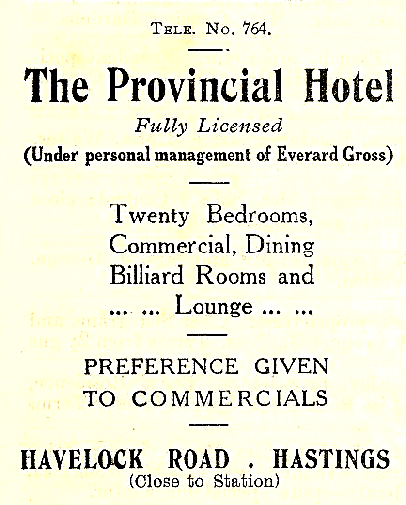 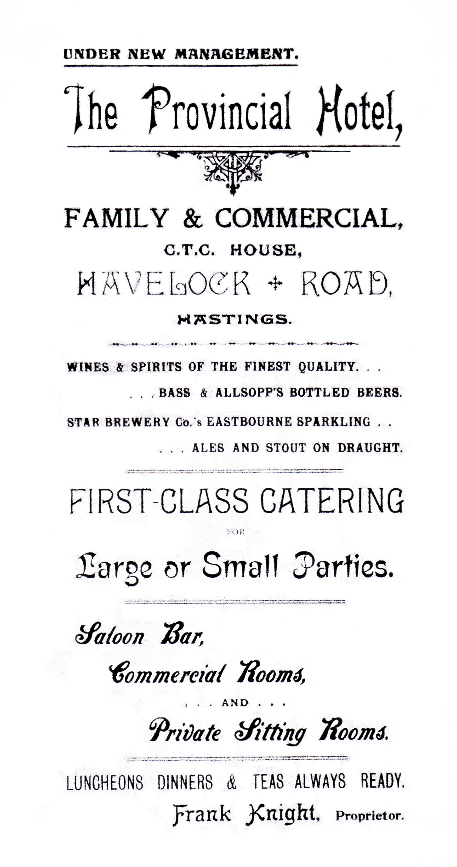 The label shown here was designed by a group of Golden Hind customers and real ale enthusiasts for Martlet. Apart from designing the labels, this group also bottled the beer. “Although Martlet brewed the beer specially”, added Julian, “they did not bottle it as they did not have a bottling plant. It was bottled manually in the pub while enjoying a pint or three at the same time.” The same group was also responsible for labelling and bottling beer at two other Hastings’ pubs: the Duke of Wellington and the Wheatsheaf, which were then tied to Charrington and Shepherd Neame respectively.

John Hodges was one of the customers involved in this. “We made pencil sketches in the bar”, he explained, “which were then developed on the computer and printed off. After we had sterilised the bottles we filled them with beer and capped them. These bottles became collector’s items. I had one of the largest collections of bottles and labels. However, we never drank the bottled beer; it became undrinkable after three months!”

Many of these bottles are traded on the internet. “Beware many of them are fakes”, warned Julian. 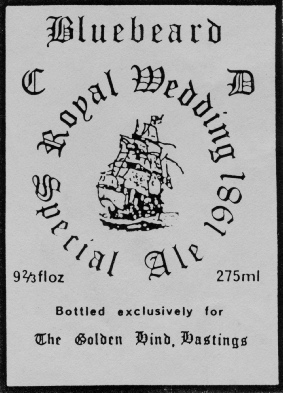 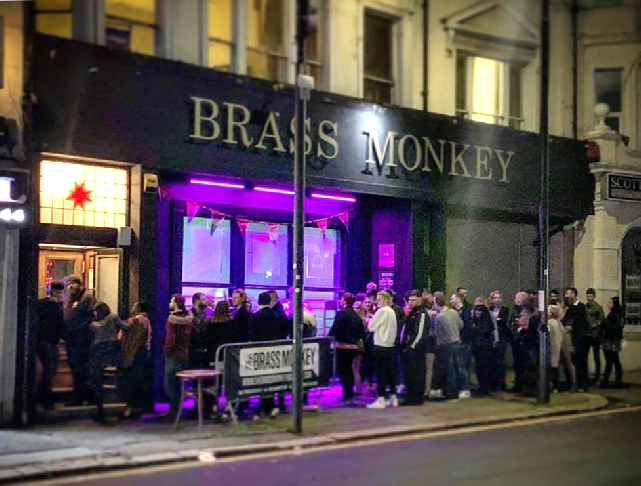 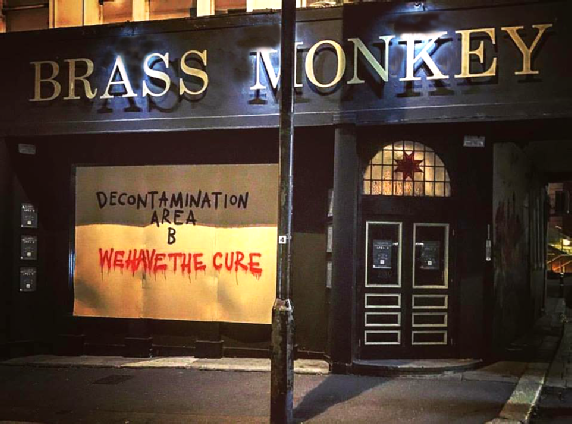 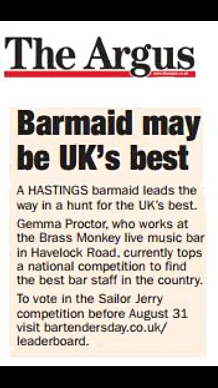