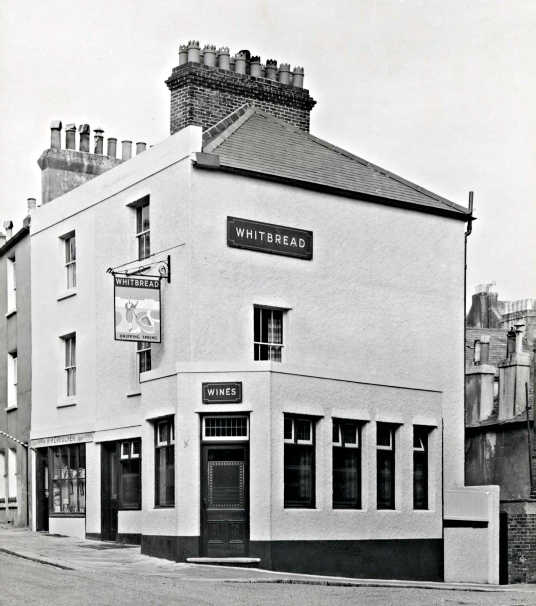 The triangle of land between Bohemia Road, Cornfield Terrace and Tower Road contains some of the earliest housing in Bohemia including, at one time, at least four pubs on Bohemia Road. In 1866 Richard Moy, landlord of one of them, the Prince of Wales, complained about the competition from ‘two more beer houses in Bohemia’. One of these was the forerunner of the Dripping Spring, a grocer’s shop and beer house run by Thomas Stubbenfield, at 35 Tower Road. Number 34, now the saloon bar, was a bootmakers.

Stubbenfield’s shop continued until 1899, but the beer house became separated from it in 1892 to become the Dripping Spring. Mrs Phoebe Tapp held the licence that year but proved herself to be ‘ill-fitted’ for the life of a publican.  In her first year she was fined for permitting drunkenness and her licence was revoked. The next landlord was Sydney Smith, who remained until 1896. 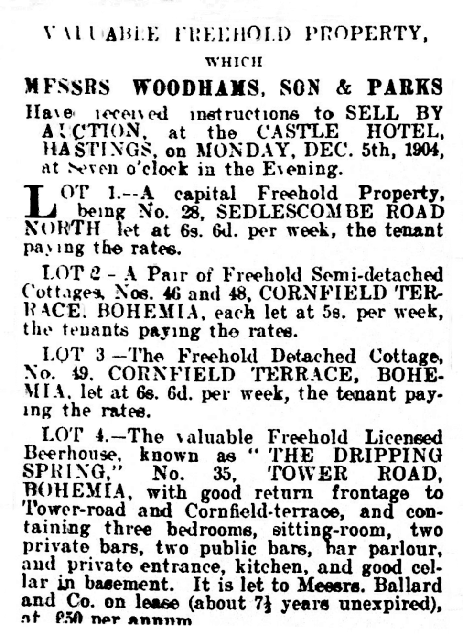 Before the First World War, the Dripping Spring ran a slate club, which in 1909 paid out £1 7s 2d [£1.36] to each of 76 members. The club came to an end when its members were recruited into the military.

In 1915 the potman was called up into the ‘territorials’. A short time later in 1916 the landlord, Fred Smith, was also called up. He appealed to the Hastings Military Tribunal and explained that he and his wife now ran the Dripping Spring alone. He did all the cellar work himself and explained that the lightest barrel was a quarter-hundredweight [12.7kg], the heaviest four and a quarter-hundredweight [218kg] and a two dozen crate of beer was a quarter-hundredweight. His appeal was refused and he was granted an exemption of one month only, before being sent to France. After his departure his wife struggled on with help from the customers but Fred was lucky: he returned from France alive and well and remained landlord until 1921, when the ‘Drip’ was taken over by Charles Martin.

Charles Martin successfully applied for a wine licence in 1938 supported by a petition signed by 153 customers, although the Bohemia Arms, the Tower Hotel, the Prince of Wales and the chief constable opposed it.

Unlike many pubs, the Drip stayed open during the Second World War and  in 1940 the building was improved. In 1943 and 1944 the Drip entered two darts teams in the Annual Observer Darts tournament. It managed to escape the bombing, unlike the Tower Hotel, which had to remove a bomb from its cellar. 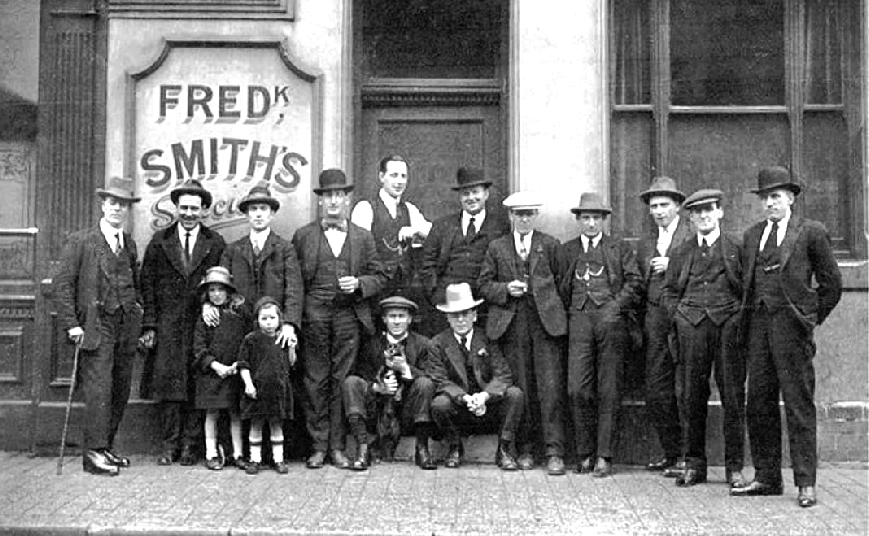 Outside the Dripping Spring 1921. Frederick Smith centre picture without hat

In 1950 the Dripping Spring was granted a full licence and its 84 years of life as a beer house came to an end. As the Licensing Act of 1910 stipulated that only pubs with two bars could have a full licence, the house next door was acquired and its ground floor turned into the saloon bar still in use today. Before this the entrance to the single bar was on the corner of Cornfield Terrace. In the same year it was included in the Whitbread miniature inn signs series.

Cyril Pelluet remembers the pub from 1957. “Sometimes we went to the Dripping Spring”, he says, “which we considered a better quality pub. The inside was smarter and husbands and wives went there together. Wives just didn’t go to the Prince of Wales or the Bohemia Arms. The Dripping Spring was a bit higher up the social scale. Not very far up but just a bit”.

In 1992 the Dripping Spring became a free house and was known as the New George and Dragon, until 1995. It started selling real ale in 1994 and in 1995 was listed in the Good Beer Guide. In 2000, the pub was voted CAMRA Sussex Pub of the Year and also runner-up as National Pub of the Year, to become the second best CAMRA pub in the country. The pub was listed in the Good Beer Guide for 10 years from 1997 to 2007 and again in 2009.

The pub is located on a part of Tower Road once known as Spring Terrace. The area is said to have several springs, one of which is thought to flow in a culvert beneath the pub cellar. Why or where it drips is a mystery. 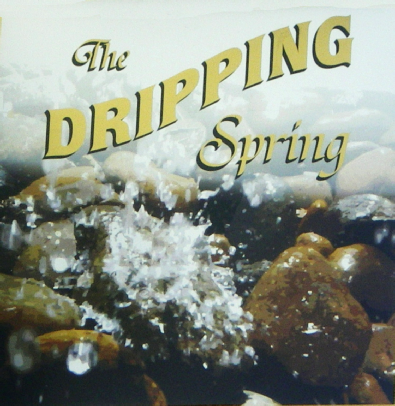 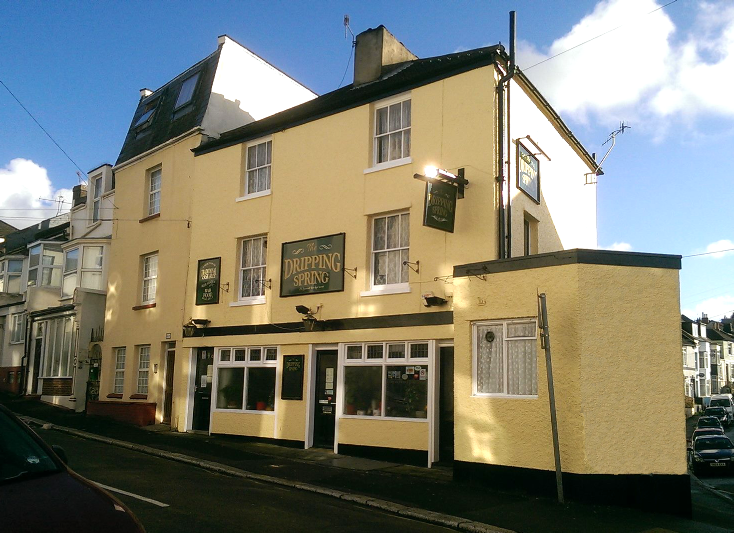 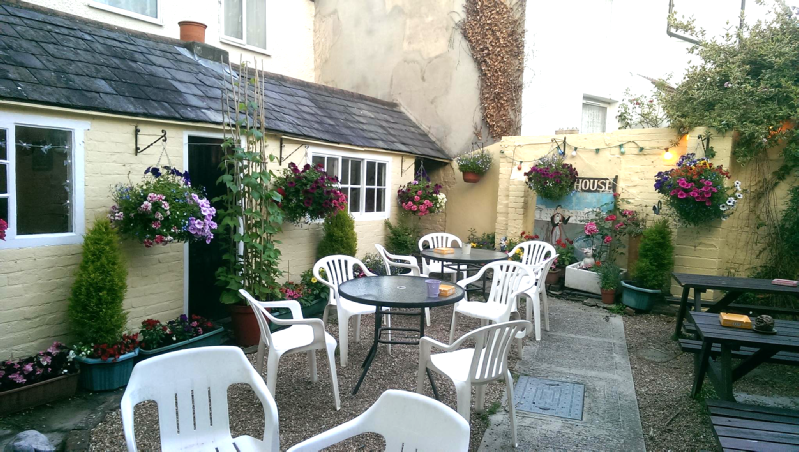 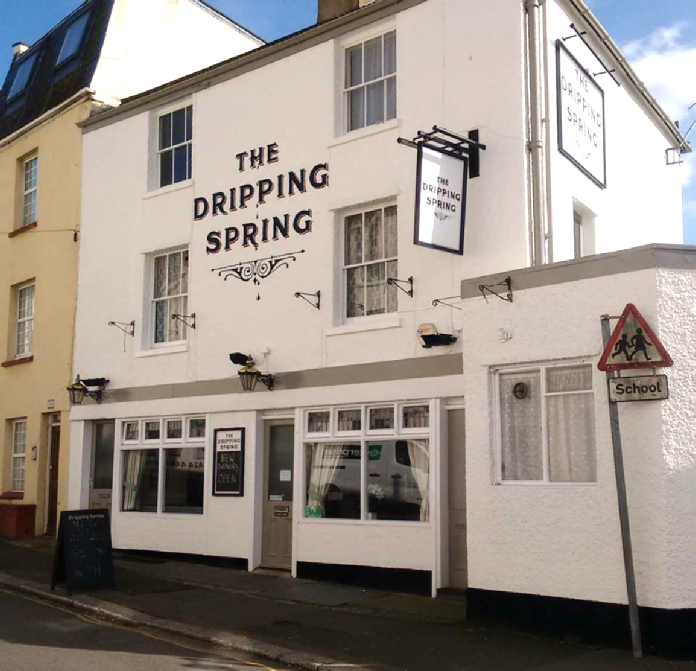 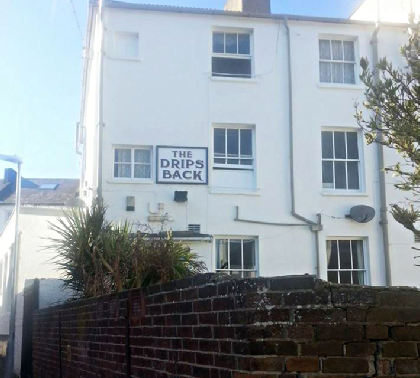 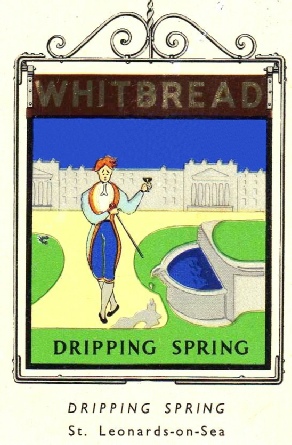