First In Last Out and Prince of Wales beerhouse 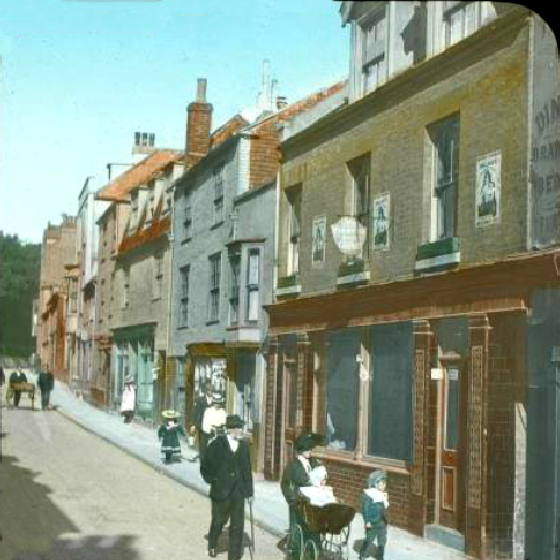 This early print of the FILO is from a glass slide dated 1905.
Hecht Collection, University of Brighton.

From 1849 to 1869 a poor beer house was located in Waterloo Passage—a twitten alongside the First In Last Out. A letter from a Reverend Alfred Barrett to the Mayor of Hastings in 1849 complained of a ‘disorderly house in St Clements’. ‘There is a beer house called the Prince of Wales in Waterloo Passage leading off the High Street’ he said. ‘It is kept by Tilden Tolhurst. He has music and dancing without a licence every Monday evening from 10pm till 12am, drunkenness, conduct quarrelsome and disorderly, obscene language, gambling among children, open prostitution in and above the house. It is a fearful nuisance to the neighbourhood. After the music ceases many of the party retire into private rooms and gamble until 2 or 3 o’clock, then to avoid the police the persons are let out in sets of three and four ….’

Despite the complaints the Prince of Wales managed to stay open for another 20 years until 1869 when its licence was revoked because the premises were ‘insufficiently rated’. Landlord William Oakley said: “This is a hard case especially after I kept it 15 years. The rating was high enough until the Rating Committee put it down!”

Excise v. Robert Swain, adjourned from Thursday last. A summons for selling spirits without a license.
Edwin Thomas Salt, excise-officer of Battle, deposed that on the 16th of May last he went into the defendant’s house, the Prince of Wales, Waterloo passage, with his wife and family, and purchased of Mrs. Swain a quartern of brandy (for which he paid a shilling) out of a bottle which she took from a cupboard. Witness also had a glass of gin, for which he paid 2d. Other persons were in the room drinking brandy, which was also served from bottles from the same cupboard. The defendant said it was a private room, and the persons were his relations from London.
The witness believed the room was entered for the sale of beer.
Mary Ann, wife of the first witness, corroborated his testimony.
Frances Vidler, a married woman, stated that on the day in question she saw the witnesses come into the Prince of Wales, and bring a pot of ale from the bar into a room in which witness and some of Mr. Swain’s friends were sitting. Salt asked Mrs. Swain for some brandy, and she said she had none. He then asked for gin, and the same answer was given. The persons, however, in the room gave him a glass of gin from a pot on the table, which witness had fetched just before from the Crown for Mrs. Swain, to treat her husband’s relations with. When the person went out he threw a 6d. on the table. ‘She had been in the habit of coming for gin for Swaine. Fined £50 but as it was a first offence reduced to £12.10s.

Before the First World War, the FILO ran two very successful slate clubs, one for men and one for women. The fact that it had a female club suggests it had female customers, which was quite advanced for that time. We know that many pubs were negative about female custom and in the majority of cases, women were not served. The slate clubs met regularly to organise sick, unemployment and death benefits and for social occasions and dinners. In 1909, for example, the men’s slate had 30 members and paid out £40 1s 9d [£40.08] in sick pay.

In 1929 landlord Samuel Mepham, was accused of being drunk in charge of the bar and it seemed a foregone conclusion that the pub would close. However, his case was unusual. Mepham had served in France in the First World War and claimed to suffer from ‘neurasthenia’, a condition brought about by trench gas in the Somme. He had also suffered a kick in the head by an army horse and these two things, he claimed, were the cause of his depression, strange appearance and unusual behaviour. Although he had medical witnesses, the court obviously disbelieved his story and fined him two guineas [£2.10].  This was in July 1929 and by August he had lost his licence, which was temporarily transferred to a manager of Ballard’s Brewery, Lewes. The police then stopped opposing the licence ‘having no further evidence to offer against renewal’ and the life of the FILO continues. This brought the total number of landlords between 1908 and 1929 to eight.

In 1933 the FILO applied for a wine licence. The landlord told the magistrates that he was interested in promoting ‘the wines of the British Empire’, which was bringing ‘wine within reach of the middle and working classes’ for the first time. However, a wine licence was refused and the FILO had to wait another 20 years before it could legally sell wine. After 78 years as a beer house, the pub was granted a full licence in 1954. It has been a free house since 1976, having previously been tied to Charrington’s. 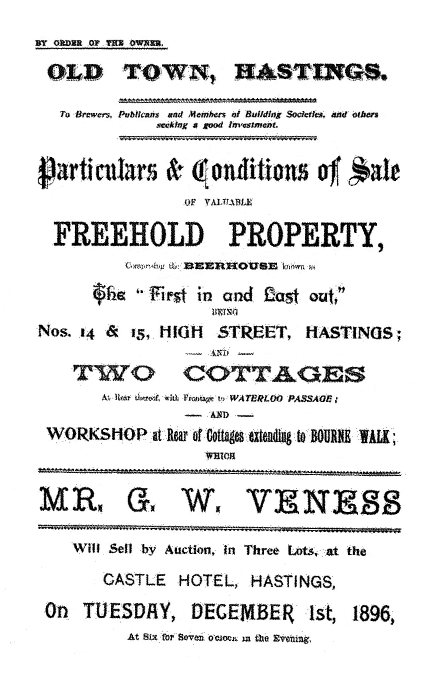 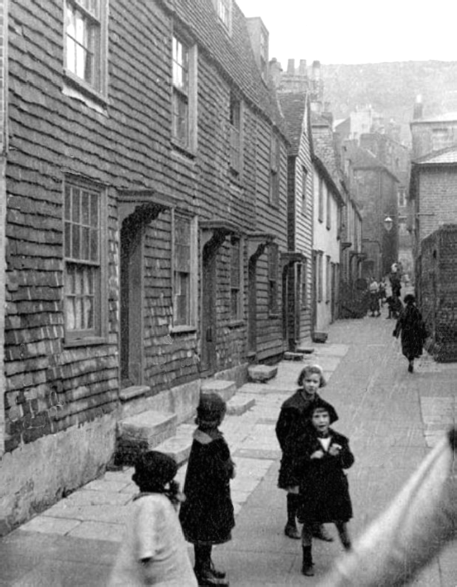 In 1982 the FILO acquired a milk pump and was the first (and only) Hastings pub to sell pints of draught milk.  In 1985 the owners established a brewery on the premises. At first the St Clement’s Brewery used four milk pasteurizing tanks which were adapted to become a mash tun, a copper and a sedimentation tank with a brewing capacity of five brewer’s barrels.

The St Clements Brewery was founded two years after the micro-brewery, attached to Mr Cherry’s on the Marina, opened. Mr Cherry’s Brewery closed around 1990.

A purpose built brewing plant was installed in 2000 and the name changed from St Clements Brewery to the FILO Brewery. In 2011 a new site was acquired a few hundred yards up the road and the brewery, now known as the Old Town Brewery, moved into a converted grade two listed stables. Six real ales are brewed here regularly including Old Town Tom and Crofters. Occasional beers for special events such as bonfire night are also produced here.

The FILO has appeared in the Good Beer Guide over several years and has been home to the Hastings branch of the Society for the Preservation of Beers in the Wood.

Many regulars have pondered the meaning of the pub’s unusual name. The pub sign shows a Hastings stage coach and its name possibly stems from the fact that it was at one time, the last pub before Halton. The acronym ‘FILO’ is also an accounting method for valuing inventories for tax purposes.

A  double sided sign in 1996 showed a cat being put out at night on one side and being let back in the following morning on the other. A copy of this sign can be found on the Purr n Fur website, a site dedicated to cat lovers. 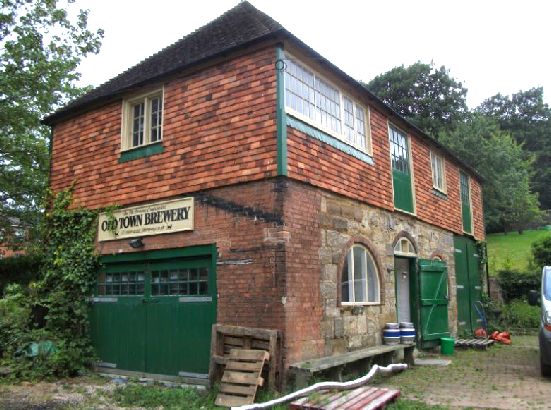 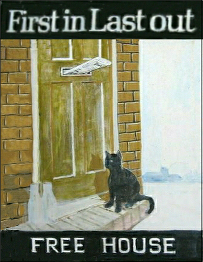 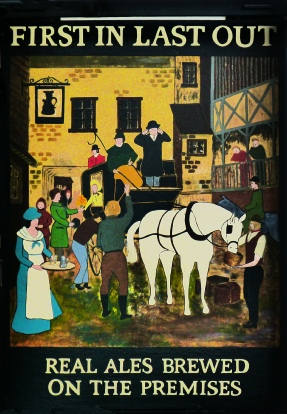 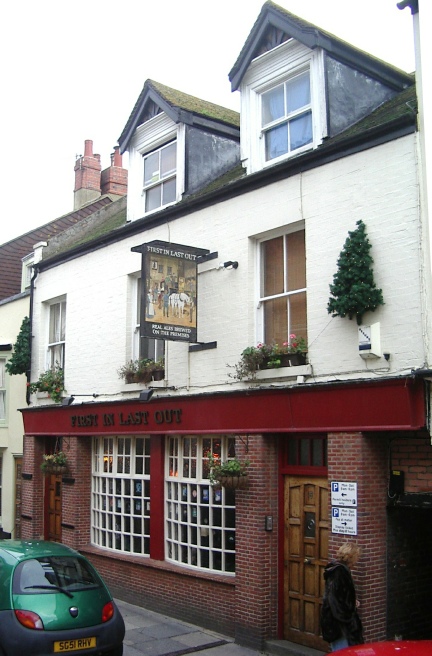 FILO 2009 with Waterloo Passage on the right  Hodges

In the same year the adjacent building, now the FILO, was a corn dealers, run by Charles Pearson. In 1876 he started selling beer and by 1880 the premises had been transformed into a beer house. George Crampton took over in 1889 and gave the First In Last Out its distinctive name. He remained landlord until 1901 before moving to the newly licensed Railway Stores, Hughenden Road, near Ore Station. He left the FILO owing money to a local beer wholesaler, which suggests that he didn’t brew beer himself. 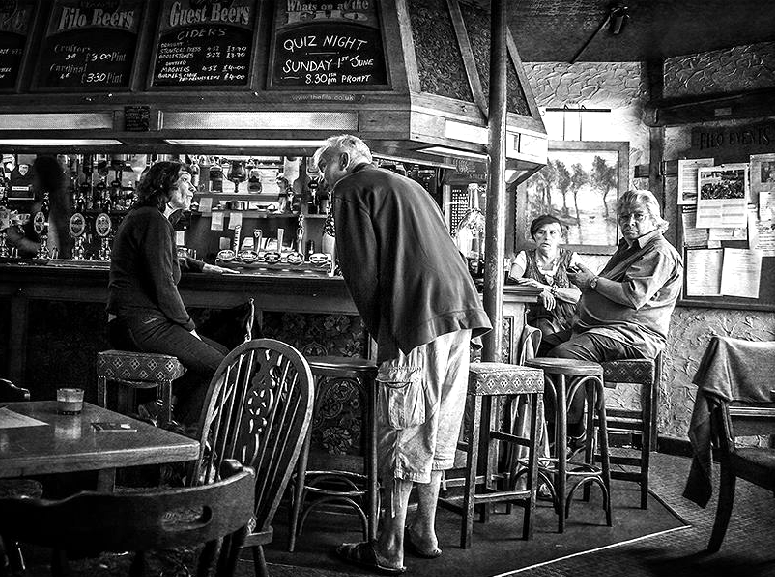 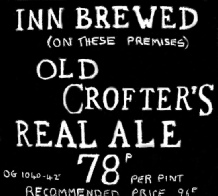 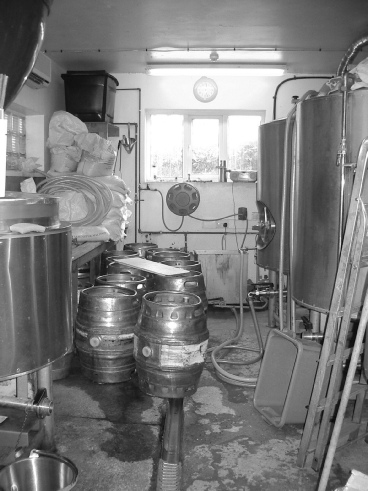 Brewed in the FILO  Russell 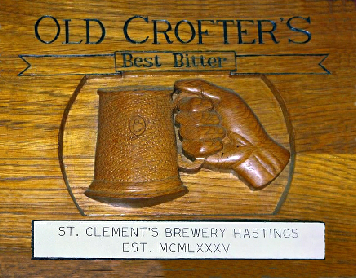