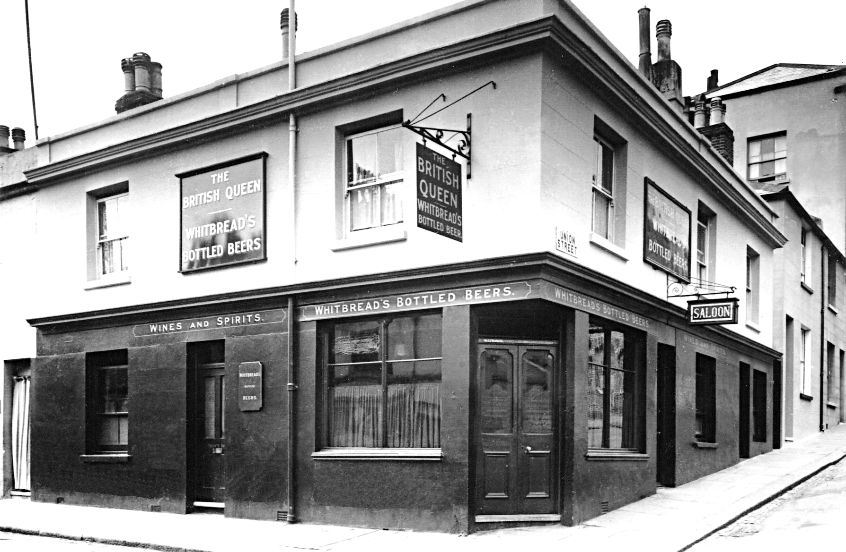 Formerly known as the British Queen, the Fox had a checkered history. It was listed in the Sussex Directory of 1855 as a beerhouse and most likely existed before then. The first landlord was James Barnett, who had his own pewter mugs inscribed ‘J.B. British Queen, St Leonards’. These were probably used only in the saloon bar. Beer in the other bars was served in enamelled earthenware pots in quarts [2 pints], pints and half pints. In 1858 he moved on to become landlord of the Tivoli Tavern in Silverhill and in later years the pewter tankards became collector’s items.

George Linton applied for a full licence in 1862 but was refused, although his name appears in the licensees’ register from 1865 to 1897 and the name of his widow Ann Linton from 1898 to 1909. The pub was originally tied to the long gone St Leonards Brewery of Shepherd Street and has passed through the hands of seven different brewers since. As a tenant of the St Leonards Brewery it sold the original ‘St Leonards Pale Ale’, brewed by them over 150 years ago. In the 1880s the British Queen sold its own whisky in bottles of its own design, which on at least one occasion was found by an inspector to be very much under proof.

In the 1890s the British Queen had problems with bookmakers and their ‘runners’ collecting bets in the bar, and landlady Ann Linton was cautioned for allowing them access to the premises. The runners in question worked for George Talbot, who kept a furniture shop at 10 North Street and collected betting slips from hotels, pubs and cafes.

In the 1930s the British Queen was a popular darts venue, used by London General Omnibus employees residing at the Capel le Ferne convalescent home. Ralph Peacock, formerly captain of the darts team, became landlord in 1938 and in 1939 Whitbread’s completely refurbished the building. “It is extremely difficult to recognise the interior of the present building as that of the old British Queen” said a reporter. “Large areas of wall have been demolished and small rooms have become spacious bars all of which can be easily served from one convenient recess.

The building presents an attractive frontage, the lower parts of the walls in Union Street and North Street being beautifully faced with bright tiling by Carter’s of Brockley, South London. These tiles together with new lightly varnished grained doors and half opaque door panels and windows with leaded upper ventilation, add much to the beauty and brightness of the exterior. The actual serving bar has been greatly lengthened and the whole is made more cheery and comfortable on a cold day by a large ‘Courtier’ stove another of which set upon a tiled mount, is also a feature of the saloon bar. These stoves which are fed with Coalite are the latest thing in heating. Being free from smoke and dust they don’t affect the atmosphere and will keep alight throughout the night. All the bars have been refloored and the new style counters and latest floor coverings have been chosen in compliance with a suitable colour scheme to tone with the light varnished grained wood.

The saloon bar is especially effective and very spacious for the original small bar and private room have now been set out as one. The saloon is always bright and cheerful with flowers and pictures. A long counter surmounted by opaque glass partitions and display shelves for wines etc replace the former serving ‘flap.’ The new furniture is very pleasing, and the brightly decorated walls and ceilings all add in no small measure, to the comfort of the customers. There is also one of the popular pin tables. There have been similar alterations to the private bar which now contains a dart board and it is estimated that the three bars can now hold well over a hundred people without crowding. 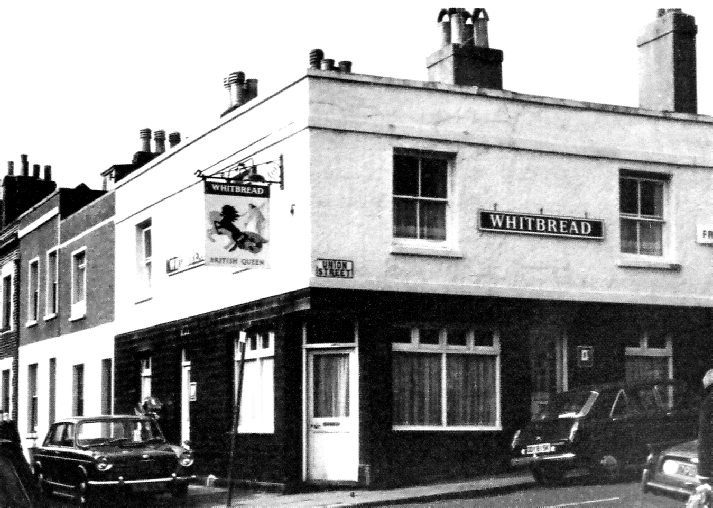 The cellar contains the usual full range of liquors and the ever popular Burton four Xs which comes straight from the wood. Glass tubes to the beer engines have replaced the original rubber ones. Snacks are always available and can be kept hot by a special electric stove.

The public bar, now one of the largest in the town, offers first rate facilities for every type of game such as darts, shove penny, cards, cribbage and a ‘Bull’ board played after the style of shove penny. Bull was played on an extended board with an extra bed, the tenth bed, containing the bull. “Shove-penny, as opposed to shove-ha’penny”, explains Alan Crouch, “was the game found in Hastings and Eastbourne. The difference between the two was only in the coins used. Some players  cheated by keeping a chestnut in their pocket. Rubbing the nut and then the penny affected its performance, as the oil in the nut made the penny stick. Shovepenny boards were treated with paraffin, water or beer and cleaned with newspaper or a beer mat. Players prepared the pennies by heating one up and putting it onto a block of wood, which made a mould. A cold penny was put into the mould and smoothed with emery cloth or a surface grinder. This enabled players to have pennies of different weights, giving each coin its own characteristics. However, before matches all pennies were weighed.”

From the 1960s to the 1980s the custom of the British Queen  was  boosted  by employees of  the  Central Electricity Generating Board, then a nationalised company, employed on the construction of the two power stations at Dungeness. Many lodged in St Leonards and were bussed daily to the site. The first power station was connected to the National Grid in 1965.

The pub managed to stay open for over 160 years, although it did close down in 1990. After another refurbishment, when its three bars became two and the original pub sign of Queen Boadicea driving her chariot was taken down,  it reopened in 1992 as the Fox. A new sign showing a fox was erected in 2009. The British Queen sign was included in Whitbread’s miniature inn signs in 1950. The Fox finally closed in 2010 and is now private housing.

In 1940 the British Queen darts team won the Annual Observer Darts Tournament, beating 54 other pub teams. However, this record was marred in 1942 when the next landlord, Stanley Wood, was summonsed for ‘harbouring’ army clothing, Canadian cigarettes and tobacco, which he was selling from behind the bar. In court it was stated he had ‘ten pairs of woollen drawers, vests, socks, boots and other clothing all marked War Department’. He also had in his possession 6,680 Canadian cigarettes and 7lbs [3kg] of tobacco. He claimed to have lent money to Canadian soldiers, who offered the goods as security. He was fined £50 and lost his licence.

Thirty-five years later the British Queen welcomed customers from another Commonwealth country. Michael Monk,  a regular at the time, remembers: “The Seychelles Islands gained independence from Britain in 1976. In 1977 or 1978, the  Commonwealth Conference was being held in London. Among the delegates, the first president of the Seychelles, James Mancham, learned that he had been deposed by a coup d’état. Obviously he couldn’t go back immediately and he and his delegation stayed in Hastings until it was safe to return. I don’t know where they stayed but five or six ministers of the Seychelles Islands’ government drank in the British Queen saloon bar for a couple of years and we spent many an evening in their company. It was quite friendly and relaxed and there was never any question of racism or anything like that. They must have eventually returned.” 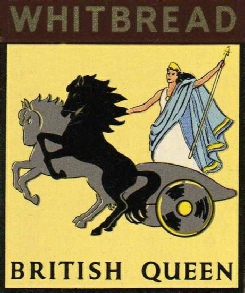 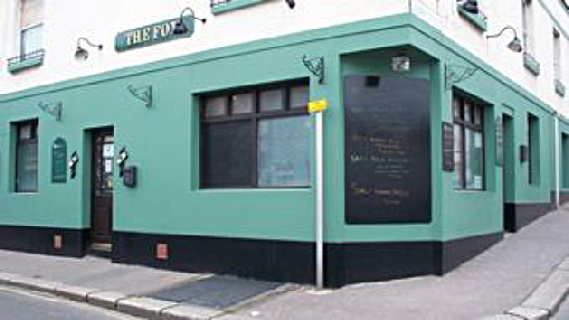 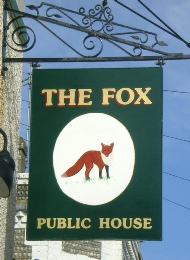