The Hare and Hounds, Ore c1790,  sketch by Francis Grose

The Hare and Hounds is known to have existed in 1777 but was probably much older. It has a special niche in local history because the town’s first theatre, a small playhouse built in 1806, was attached to the pub, situated at that time just outside the town boundary. It was located here because theatre was thought to be a corrupting influence on the working classes and was not allowed in Hastings itself.

The Hare and Hounds was five minutes walk from Halton Barracks, built in 1804, where troops were stationed in readiness for the threatened invasion by Napoleon. The troops were good customers of the Hare and Hounds and on 1st July 1806 the first  performance of a comedy called The Soldier’s Daughter was shown here. But by 1809, when the garrison was reduced, the audiences dwindled and the theatre was forced, at times, to put on shows of performing dogs.

The Shakespearean actor Edmund Kean, on a visit to Hastings in the 1820s, offered to play Shylock in the Merchant of Venice for one night only. He was accompanied by Robert Elliston, a leading comedian of the day, and the evening was a resounding success. The scenery painter, Thomas Sidney Cooper RA, worked in the theatre for a short period, and was hired to paint the scenery for a play called the Battle of Hastings.

‘I was busy painting the tent of King Harold in pink and white stripes’, he records in his autobiography, ‘when an amateur actor sauntered up with the very insulting manner that was usual to him (for he was a very high-and-mighty young gentleman, and thought a great deal of himself), and said it was not a bit like the tent. I said, “Don’t interfere with me and I won’t interfere with you.” But just as Mr Kean entered the theatre, he came again and called me an ass. Now as ill luck or good luck (I don’t know which to say) would have it, I had in my hand what is called a pound brush full of pink paint with which I was laying on the pink stripes of the tent, and I suddenly turned and rammed it into his mouth. Upon this Mr Kean said to him: “Sir, I don’t know who you are, but I heard what you said to this lad, and it is my opinion that you are no gentleman, and it served you quite right to have your mouth stopped with pink paint.”

Cooper also recalled the whole company having lunch in the Hare and Hounds. ‘In the course of an hour it was ready and we all sat down and enjoyed the repast. Spirits and wine were in abundance. The two great men were free with the bottle and several of the others followed suit. Elliston was lively with jokes, and did a good deal of flirting with the actresses. Then he danced, and, in his frolicsome hilarity, kicked over the table breaking the bottles and glasses. All the wine was spilt, everything else spoiled; and no one seemed to care much about it but myself, for I had only eaten and had drunk nothing, never having, up to that time, even tasted wine, while the rest of the company appeared to have taken quite enough.’ 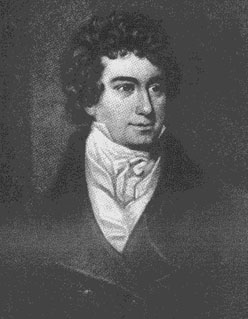 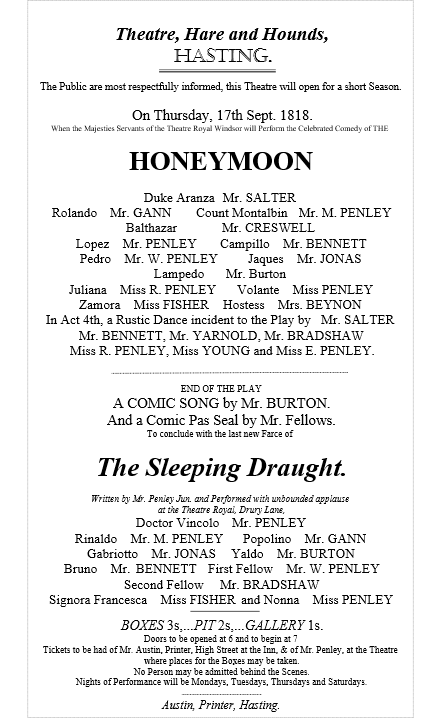 The pub was considerably enlarged in 1810 with several bedrooms, stables for eight horses, one and a half acres of meadow and a fenced tea garden, but on Boxing Day 1867 a fire destroyed both the inn and the theatre. In 1868 the Phoenix Fire Office paid out ‘£400 for the destruction of the Hare and Hounds [and] the adjacent wooden building, which latter was quite destroyed’. A new public house was built on Old London Road, a little to the south-west of the old inn, which was in the area now known as Saxon Road. The theatre is remembered on an inscribed tablet on a nearby wall, unveiled by Sir Herbert Beerbohm-Tree, a famous Edwardian actor-manager, in 1914.

By the early 1900s the Hare and Hounds registered 410 members of the Equitable Friendly Society, which provided insurance against sickness, old age and death. The membership comprised 300 men, 20 women and 90 juveniles. Because the juvenile members were not allowed into the pub, the society had its own entrance to a large upstairs room, where they met and sat down to ‘beef pudding and plum suppers’. The branch may have moved to the Clive Vale Hotel a few years later.

During the First World War, the pub was revisited by the military, this time by Canadian soldiers, 7,000 of whom were billeted in the town. The landlord hinted at the headache of their custom in 1918 when he transferred to the Cricketers, which he said, ‘was a much easier house to manage than the Hare and Hounds’.

The pub was also the home of a tontine club, a type of savings club with a fixed number of members who each received an annuity at Christmas. The tontine operated for several years and was run by secretary Isaac Pattenden. He collected members’ weekly subs, kept an account and handed the total to the landlord. The money was then banked with the brewers, who took charge of it as an investment. The size of the annuity paid out increased as the number of members decreased through death. The remaining capital was ‘scooped’ by the last living member, who, in this case, died in the 1940s.

Just before Christmas 1933, it was found that the landlord had absconded with £50 8s [£50.40] of the tontine funds. Tamplin’s the brewers made good the deficit, remarking that at the time there were a lot of poor people in the district of Ore and they ‘wanted to stand by them’. The landlord, James Pritchard, was committed for trial for fraud and given three months imprisonment. The only other known tontine club in the town operated out of the Marina Inn in Caves  Road.

For many years the Hare and Hounds ran popular darts and shovepenny teams. It fielded teams in the Hastings league and in the brewery league, but in the 1960s at least, the landlord and landlady organised their own championships and awards. Annual winners had their names inscribed onto silver trophies for darts and for shovepenny. In 1965 they added a third trophy, for cribbage.

This old pub closed in 2006. It had been an integral part of the Ore community for at least two and a half centuries. It is now residential accommodation. 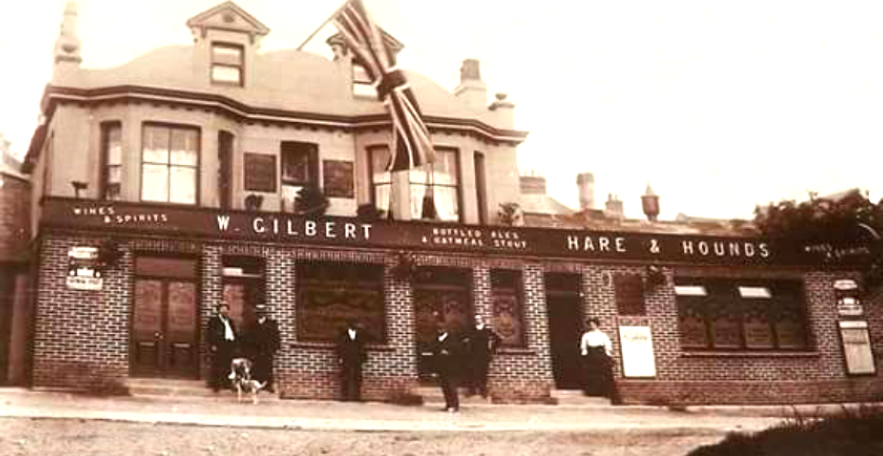 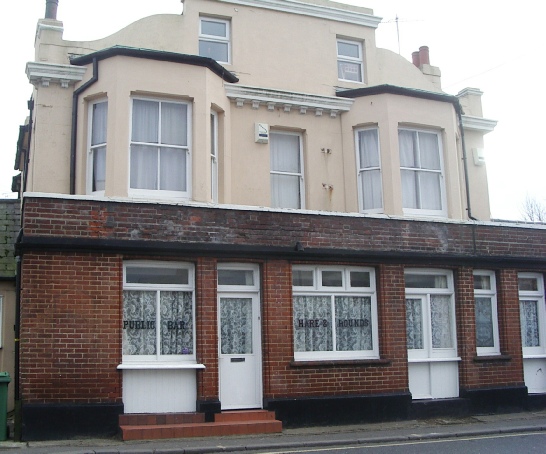 Site of Hare and Hounds 2009  Russell 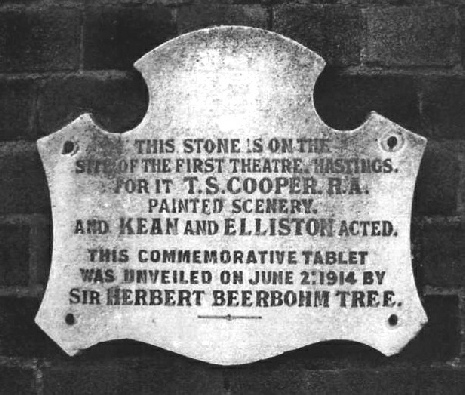