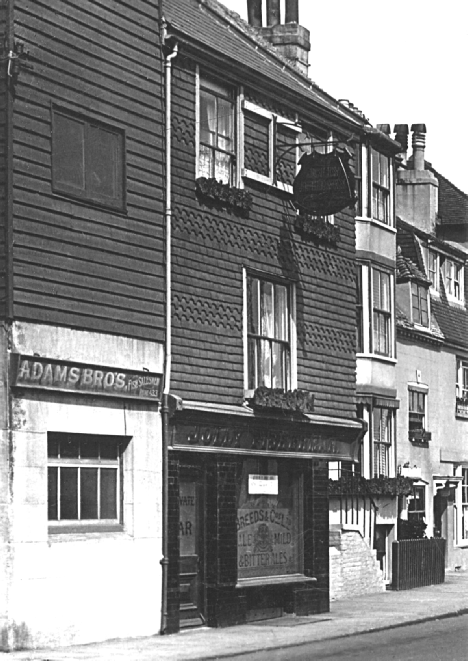 Deeds show that the building known as the Jolly Fisherman dates back to 1769. It was first licensed in 1834 and by the 1840s the landlord had acquired a lease for part of the stone beach opposite, known as the Stade, which included a traditional rope and net shop for the use of his fishing customers. This was common practice among the fishing pubs and from the 1840s to 1900 at least, beach leases were held by the Cutter, London Trader, Jolly Fisherman, Royal Standard and the Dolphin among others. In 1868, for example, a lease was issued by Hastings Corporation to landlord Robert Swain at a rent of 5s per annum. And in the 1880s a lease was issued to ‘fisherman and landlord’ William Adams. His son, Thomas Adams, was a fish wholesaler in the nearby Fish Market. He also owned a net hut next door to the pub. He earned his living from his boat, from the market and from the pub. Running the Jolly Fisherman had very nearly become a third occupation.

Fishing families had allowances in the pub, which provided credit until the skipper paid the bill on a ‘day of settlement’, usually when the trawlers returned. Wives also had allowances with the butcher and the baker, who were paid in the same way. The fishing community was very much pub based and until 1855 some pubs opened throughout the day and night. The licensing laws of 1855 and 1872 attempted to reform opening hours and created a new category of customer ‘the bona fide traveller’. This gave travellers the right to be served upon request. Fishermen returning from trips were quick to take advantage. But the ‘boy ashore’, a member of the crew who worked ashore, and men employed unloading and delivering fish to the market, were excluded. This anomaly caused a lot of trouble.

In 1856, for example, the landlord was charged with ‘disturbing the peace’ when a police inspector claimed a fracas had developed when he asked him to close at 12.20 am. Several witnesses said the inspector was drunk and ‘had some little ill feeling towards the Jolly Fisherman and its landlord’. The landlord claimed he was outside the pub only ‘to see if the brig was ashore’.

And in the previous year a woman charged with disturbing the peace at 3 am claimed she had just left the Jolly Fisherman ‘in consequence of a collier being ashore’. These cases demonstrate that the fishing pubs opened and closed on demand to serve the crews of colliers, traders, brigs and trawlers. 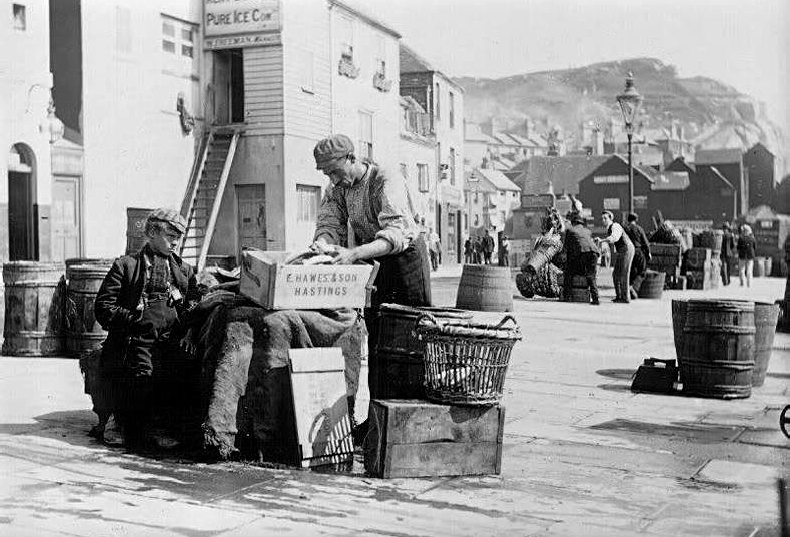 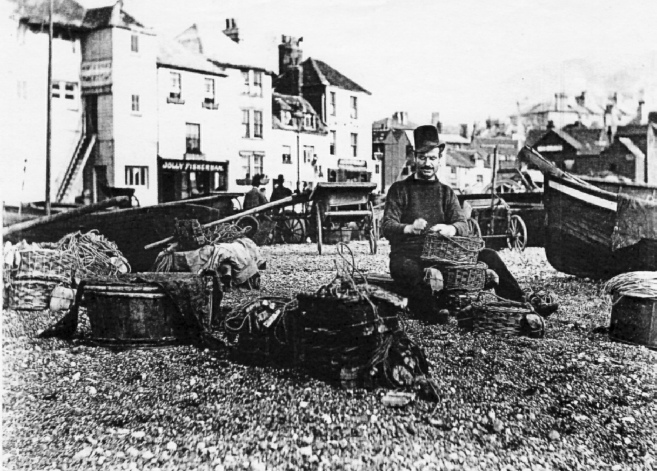 Pub opening hours were further controlled from 1869, so when the fish market opened in 1870, the pubs around it were granted 5 am licences. The Jolly Fisherman got its early morning licence in 1875 but subsequently lost it. When pub opening hours were further restricted during the First World War, the Jolly Fisherman asked for the return of its early morning licence but was refused. In 1900 some pubs lost their 5 am licences on the basis that the fishing industry was in decline due to traditional sailing trawlers being out-classed by new steam trawlers.

On the outbreak of war in 1914 this part of Hastings was described as ‘very crowded when the fish come in’. Imagine the scene in the early morning with boat crews, the ‘boy ashore’, and buyers sheltering in the pub with their pint waiting for fishermen looking for ‘sole buyers’ and ‘cod buyers’. Other customers included boat owners, skippers and mates.

In 1925 the Jolly Fisherman again applied for an early morning licence from 6.30 am to 8.30 am, on the basis that ‘several hundred people are out and about at the fish market during these hours’ and if the pub was closed ‘fishermen wouldn’t get their glass of milk and whisky’. It was reported that 30 large boats, 45 small boats and steam trawlers from Rye put into the harbour. But again, the application was turned down. 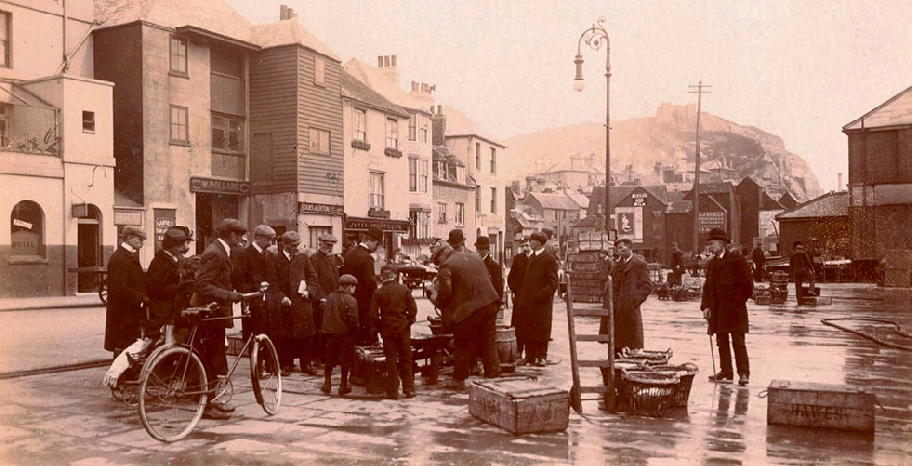 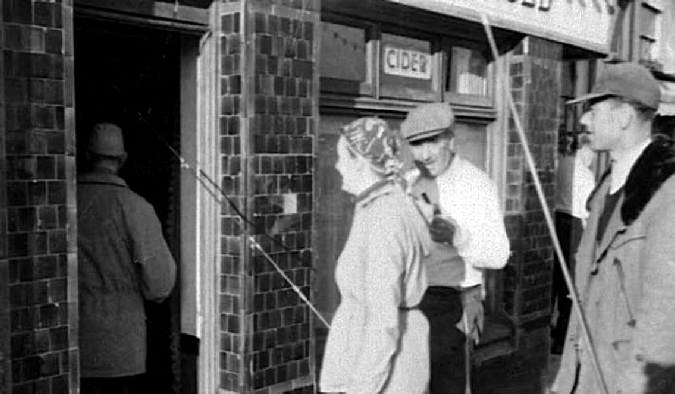 Jolly Fisherman after an angling competition 1952 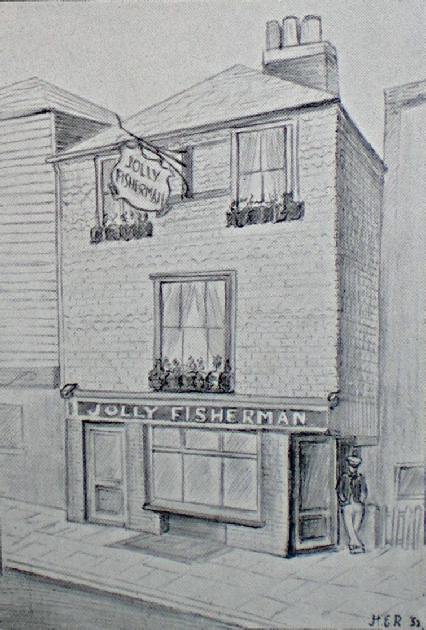 The declining fishing industry prompted the opening in 1899, of the Hastings Winkle Club, a self-help charity for poor fishing families. It had its headquarters in various pubs at different times including the Jolly Fisherman from 1954 until 1959 when landlord Brian Hone was treasurer.

In 1942 the Jolly Fisherman, being on the front line, suffered from enemy bombs. Although not directly hit it closed for the remainder of the war. “In 1945 we moved in when it reopened”, recalled Tommy Read, son of the landlord. “Nearly all of our custom was from the fishing community. I remember two in particular, Bodger Barton and Buller Griggs, sitting on the wooden benches discussing the fishing. The funny thing was they had different accents. One spoke in a typical Hastings accent, the other in a Folkestone harbour accent”. 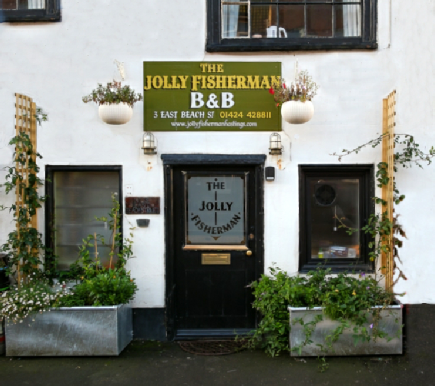 But in 2016, 57 years later, the pub reopened. The Jolly Fisherman has returned!

The pub, originally three separate houses, divided into two main bars: the Trawler Bar and the Lifeboat Bar. It is well known in the town as a live music venue with musicians from all over the country.

The pub has also been a favourite with artists. In 1952 it was the subject of an oil painting by Hesketh Hubbard who painted it during a snow storm. And in 2008 it was painted again by Jean Hope.

This popular promenade pub takes its name from a type of cargo vessel which loaded and offloaded onto the beach many years ago. 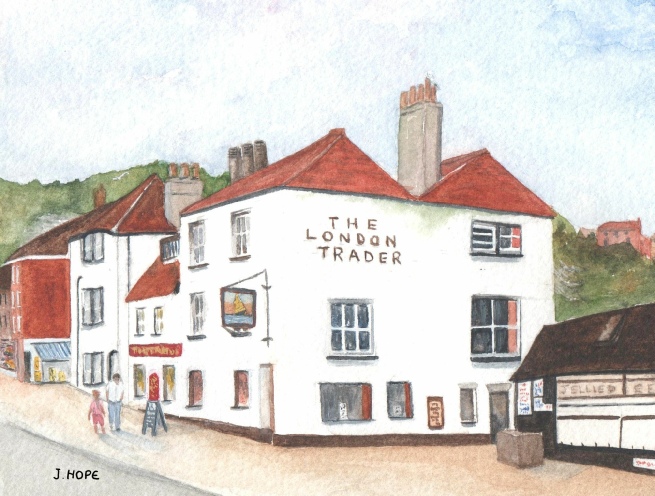 The London Trader, two doors away, appears to be about 210 years old. The building and adjoining cottage are mentioned in a deed of 1808. By 1847 the pub was owned by Ernest Misken and let to Burfields Brewery of Hastings, later Breeds and later still Whitbread’s. For 140 years the pub was run by a series of fishing families who, like the Jolly Fisherman and other pubs in the area, leased a part of the Stade for boat and net storage and for auctions. In 1887, for example, ‘an 18 ft fishing boat with sails, mizzen, cables and an anchor’ were sold. Also, a ‘Whelk Punt with oars, ropes, nets and bobbers’ was auctioned off by landlord Paul Phillips.

A longtime landlord was Tiny Breeds who stayed from 1908 to 1945 when his widow Sarah took over. He also was a part-time fisherman and brought the boat ‘Leading Star RX294’, from Dungeness in 1917. After the demise of sailing trawlers during the First World War, the ‘Edward and Mary RX74’, probably the first Hastings engine driven fishing boat, was built for him in 1919 and named after his children. It was in his family possession from 1919 to 1950 and is now preserved and stands on the Stade besides the Fishermen’s Museum. The ‘Edward and Mary’ was the first Hastings boat to volunteer for the evacuation of Dunkirk in 1940. 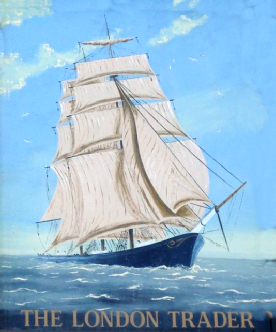 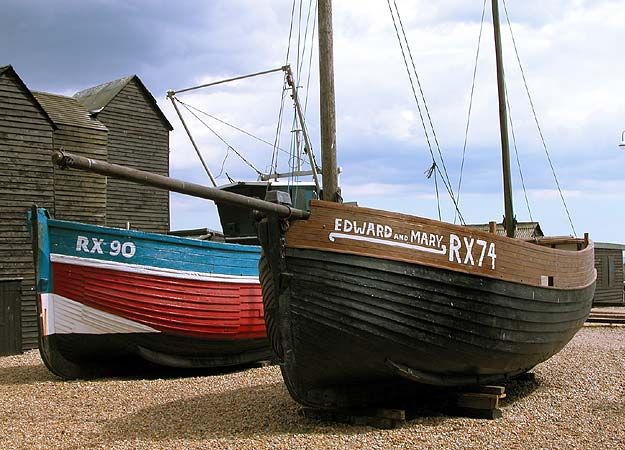 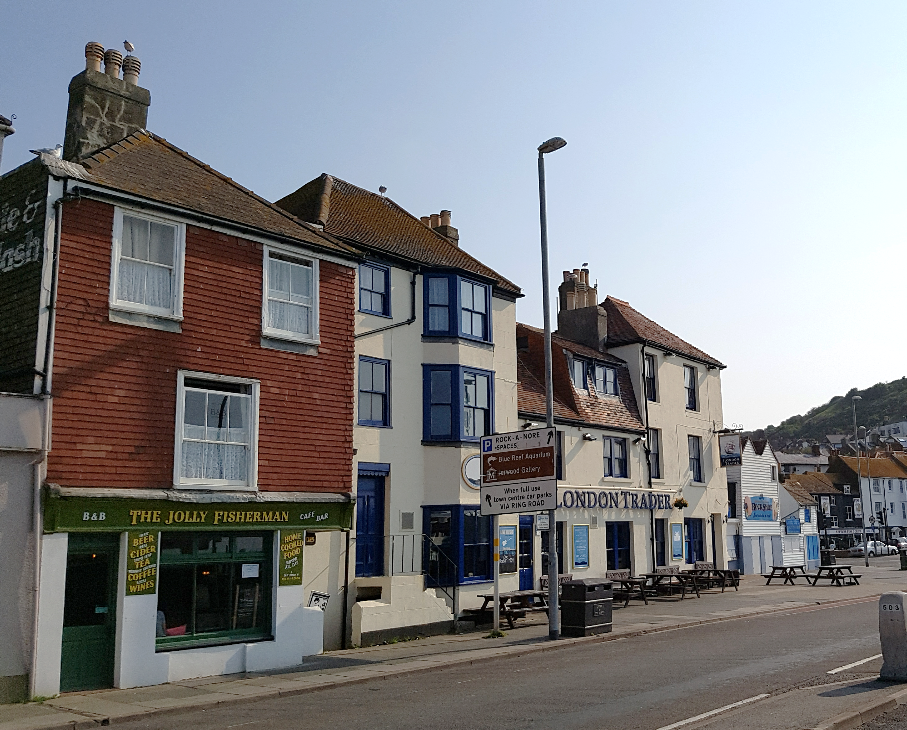 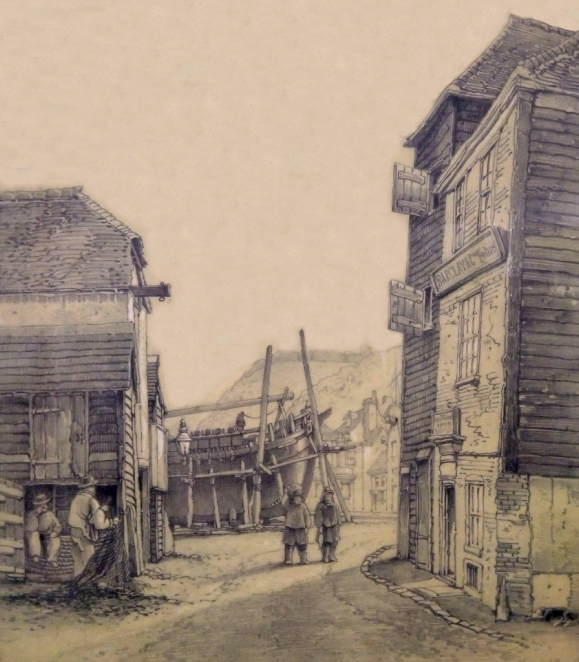