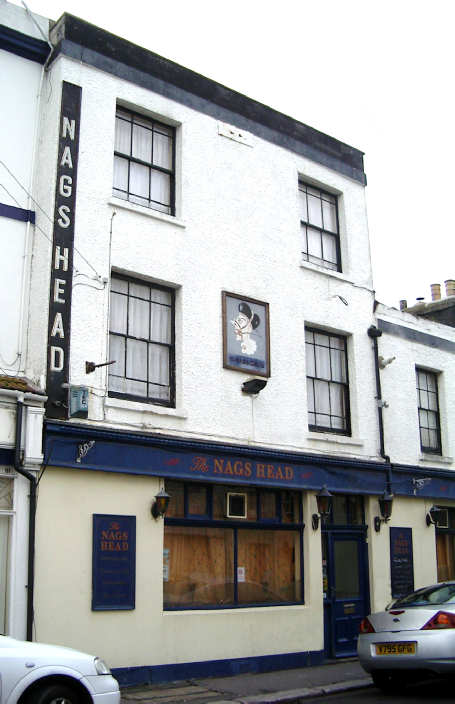 The Nag’s Head opened as an independent  beerhouse around 1835. After 18 years of probably brewing its own beer it was granted a full licence in 1855 and became tied to the St Leonards Brewery in Shepherd Street. From 1840–1855 the pub was owned by James Jessie Hack a well known pub landlord and road builder who was responsible for building Battle Road in the 1830s.  During these years he was also landlord of the Victoria in Battle Road and had some connection with the White Hart in Norman Road. In 1855 the Nag’s Head and the cottage next door were sold and merged together, and with more space it became a popular lodging house with eight bedrooms. Its lodgers included tramping tailors ‘who worked the same board’, bath chair men who pushed invalids along the promenade in bath chairs, building workers, sailors, travelling musicians and itinerant hawkers. 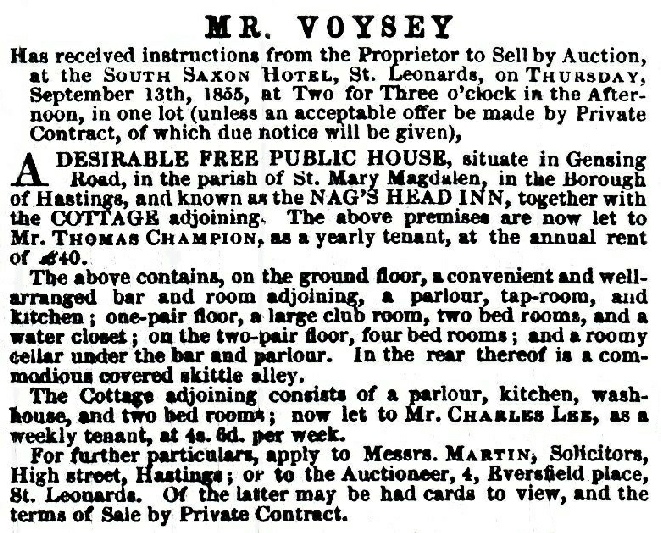 The different social classes of St Leonards, including the Nags Head lodgers, were at first kept apart by a boundary wall. This wall divided Burton’s St Leonards to the west and the area we now know as Central St Leonards to the east. It began as an arch across the promenade, then ran across Mercatoria and up the west side of Gensing Road. The wall was built to create a social and physical barrier between the ‘insiders’ and ‘outsiders’ of St Leonards. Or in other words between the upper and middle classes who lived in Burton’s St Leonards and those who didn’t.

In his Manuscript History of Hastings and St Leonards, local journalist Thomas Brandon Brett tells us that the insiders and outsiders would on occasion, jeer at each other over the wall. Outsiders taunted the insiders as “Burton bound lease holders” while the insiders retaliated by calling back: “you are freeholders of no man’s land, you don’t belong to Hastings you shan’t belong to St Leonards.”

A section of Burton’s original wall, later the skittle alley, can be seen at the rear of the Nag’s Head but most of the wall has long since disappeared or been incorporated into the garden walls of Gensing Road.  The section across Mercatoria was pulled down in 1841 to open up Norman Road.

STEALING CANARY BIRDS.—THOMAS SINNOCK, 33, and WILLIAM FRENCH, 40, mariners, for stealing, on the 3rd Sept., 10 canary birds from Henry Veller. Prosecutor, who is a foreigner, from Frankfurt in Germany, in September last, had 10 canaries in a cage at the Nags Head, Hastings, where he was lodging. Ten were missed, and it was ascertained that eight had been sold by prisoner French who had previously been convicted, three years penal servitude; Sinnock, whom two witnesses gave an excellent character —three months hard labour.

By  the 1880s the Nag’s Head had become the headquarters of the St Leonards’ Bonfire Boys (founded in 1854), although in some years they used other St Leonards’ pubs. Their annual dinners, held in the clubroom on the first floor, were well attended colourful occasions. On the 5th of November the bonfire procession started here, headed  by the St Leonards’ Town Band and the society banner. A lot of  people were involved. On a typical 5th of November parade they carried 400 torches and everyone wore a costume: hussars, lancers, admirals and colonels were followed by the ‘guy’, usually about 16 feet tall, on a coal wagon. Then more costumes: Turks, Irishmen, Chinese, Japanese and Indians followed by an illustrated banner depicting the arrest of Guy Fawkes. The procession marched around the principal streets of St Leonards before teaming up with other groups in Hastings town centre. Finally the guy was burnt on the beach, opposite the end of London Road.

Twenty years later Robert Tressell and other building workers employed by Jarrett and Adams, who had a local workshop, drank here. These men were to become famous as the Ragged Trousered Philanthropists in the book of that name by Robert Tressell. In the summer their annual beanos were organized in and started from, the Nag’s Head. In 1906 for example, they hired several horse drawn traps to take them to the St John’s Cross pub near Robertsbridge to play cricket. 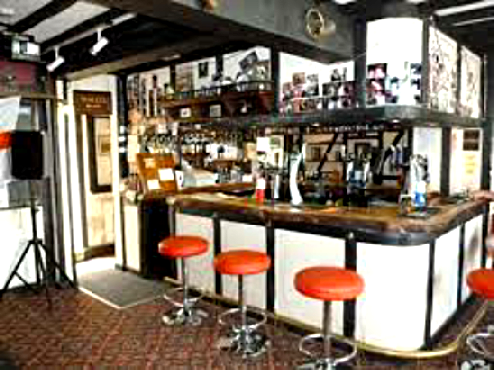 In the 1950s and 1960s the Nag’s Head was renowned for its darts team. On one memorable evening the team played the St Leonards archery club. The archers brought their own ‘dartboard’, an archery target, and used full size bows and arrows! One of the players, Michael Rose, said: “It went well until some of us tried firing the bows. One of my arrows disappeared into the passage-way and got embedded into the windowsill!” In 1967 the darts team was the outright winner of the Battle of Britain Darts Cup organized by the Hastings RAF Association. Denny Gower, later a world darts champion and landlord of the Warrior’s Gate in the 1970s, was team captain. 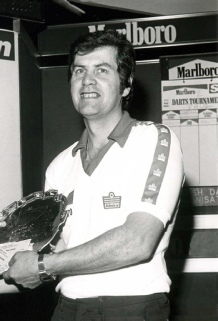 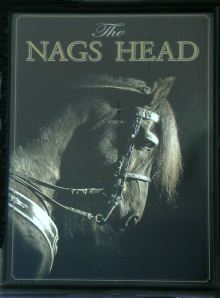 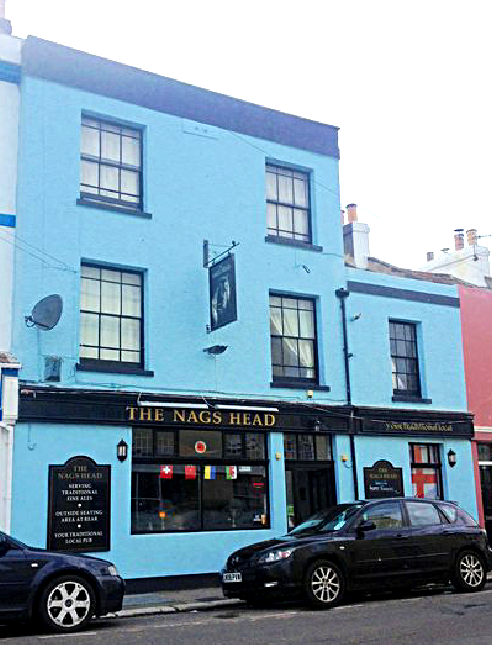 The controversial pub sign showing a woman’s head in a muzzle is another example of a pub sign in the Whitbread collection of miniature inn signs issued in the 1950s. ‘It is not generally realized that the sign was designed by a woman, Violet Rutter.’ Although the sign was controversial some other sexist pub signs in the mid nineteenth century were much more scandalous. Perhaps the most notorious example was the sign of the Load of Mischief in Oxford Street which portrayed a man carrying a woman on his back with a monkey and a magpie. The accompanying rhyme was ‘A magpie, monkey and a wife is the true emblem of all strife’. And in 1854 a beer house in Hastings Fish Market known as the Original Good  Woman, had a sign showing a woman carrying her decapitated head under her arm. According to Manwaring-Baines in his book Historic Hastings, this sign, quite rightly so, generated a number of protests and was eventually removed in the late 1850s. The present Nags Head sign, a romantic impression of a horse’s head, brings the pub up to date. 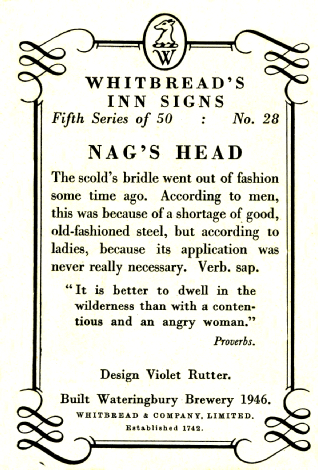 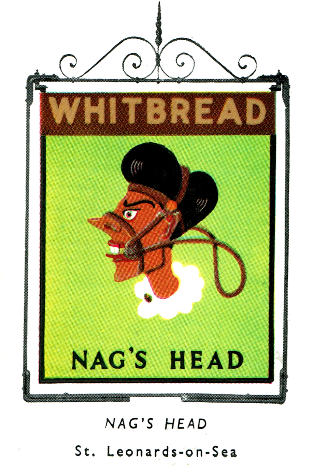 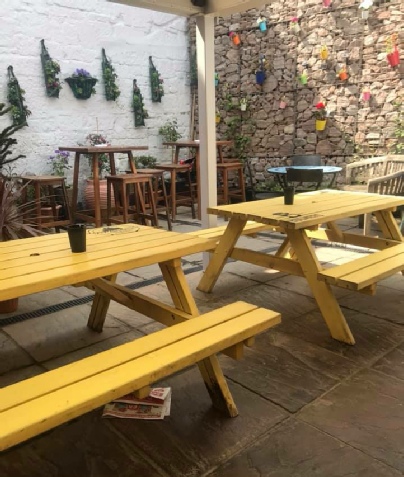