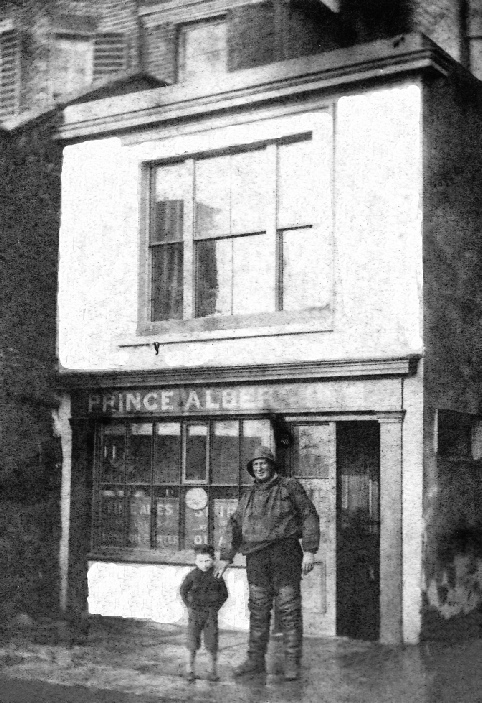 Fisherman outside the Prince Albert  Hodges

The Prince Albert, Rock-a-Nore Road, was formerly a fishermen’s lodging house, built in 1789, and tucked away among the net huts. It became the Foresters Arms in 1847 and the Prince Albert in 1852, when it was one of at least 14 fishing pubs around the Stade. Before the First World War, along with the Nelson, Royal Standard and Dolphin, it was a popular fishermen’s pub. The famous Winkle Club, a fishermen’s charity for poor children, was founded here in late 1899 and held its first charity supper on New Year’s Eve 1899/1900. The pub is now defunct but its immortality is guaranteed by this fact.

A group of local fishermen who used the pub discussed the idea of raising money for children of poverty-stricken families in the town. In those days there was no welfare state and many working class families, especially throughout the winter, existed in dire poverty and deprivation.

The fishing community decided to organise a self-help charity but were stuck for a name until somebody suggested the Hastings Winkle Club. And so it was. No time was lost in getting the club under way and the history of the club’s early days is one of inevitable development. It was decided that every member would have to carry a winkle. The mortal remains of the original occupants of the shells were removed and their places filled with sealing-wax. On being asked to ‘winkle up’, the luckless person caught without his badge of membership, the winkle, had to pay a fine–a penny in the early days–and the challenger likewise had to report him or pay a fine too. An elaborate system of such penalties developed.

Over the years the club also organised events at the fish market, including festive sports days and banana races, where competitors had to race with a ten-bushel basket full of bananas on their head. There was also a Winkle Band that marched around Old Town collecting money. 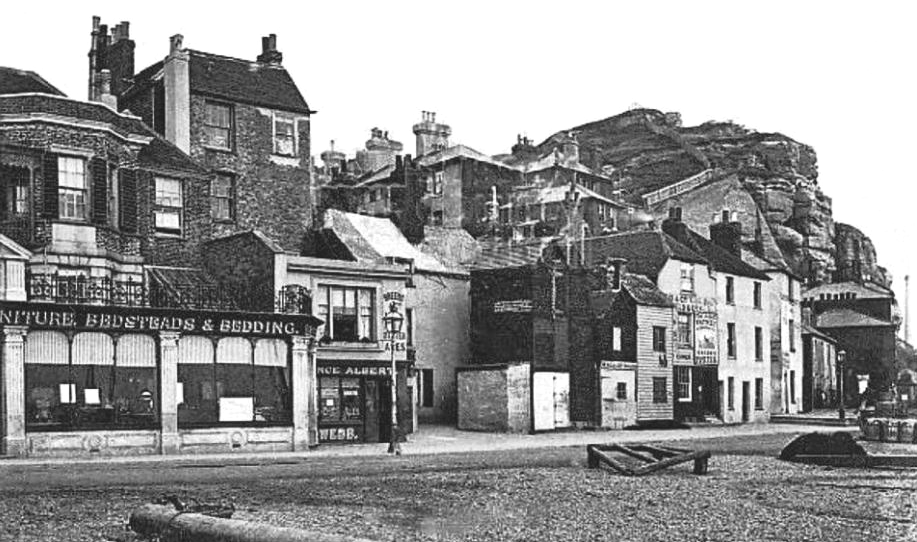 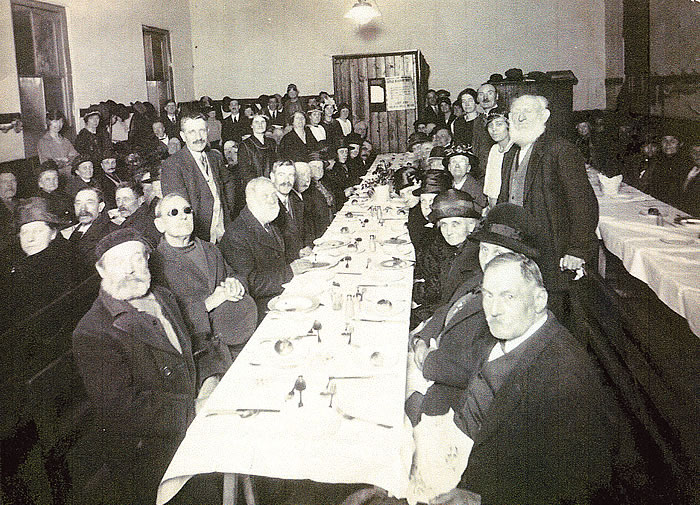 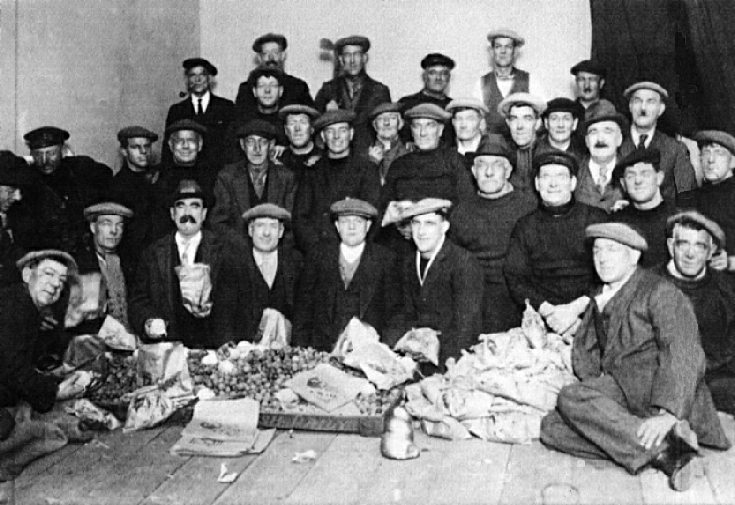 The main event was the children’s Christmas party. Ironical then, that the landlord was summonsed and fined £1 in 1920, for allowing children into the room where the Winkle Club was in session, although they used a side entrance.

This type of charity was not unique to Hastings. Mass Observation’s, The Pub and the People mentions similar charities called Dolly Clubs operating from pubs in the north of England, where every member had to carry a small dolly or pay a fine. Equally another Hastings pub, the Royal Oak, had an Acorn Club, where members were required to carry an acorn at all times.

In the 1930s a second Winkle Club was formed, at the Tivoli Tavern in Silverhill.  Both clubs operated on the same principle but with one major difference; the Tivoli Winkle Club had several female members whereas the Hastings club was exclusively male and banned women from its ranks.

With 150 members, the club closed during the Second World War, except for two concerts organised for evacuee children billeted in the town. In 1948 the Winkle Club held its first dinner for nearly 10 years because of wartime food shortages.

The Prince Albert closed in 1954 and its licence was transferred to the Duke of Wellington in the High Street. The Winkle Club moved to the Jolly Fisherman until 1959 and moved again to the Lord Nelson until 1964, when it finally found a new home at the Fishermen’s Institute where it remains to this day.

The Winkle Clubs of Hastings were thereafter remembered by an unusual pictorial link between Hastings and Basingstoke in Hampshire. In 1967 a pub sign was commissioned and designed for a new public house in Basingstoke called the Winkle. This pub is located on Winklebury Way near the Iron Age camp on Winklebury Hill. Its sign shows a winkle shell, the Hastings town arms and a silhouette of Winston Churchill gazing out across the English Channel.

The Hastings Arms represents Hastings as the chief Cinque Port. The winkle represents the historic Winkle Clubs, while Winston Churchill is included as he was an honorary member of the Winkle Club and Lord Warden of the Cinque Ports.

The Prince Albert is now the Mermaid Restaurant adjacent to Winkle Island, and a monument of a winkle shell. 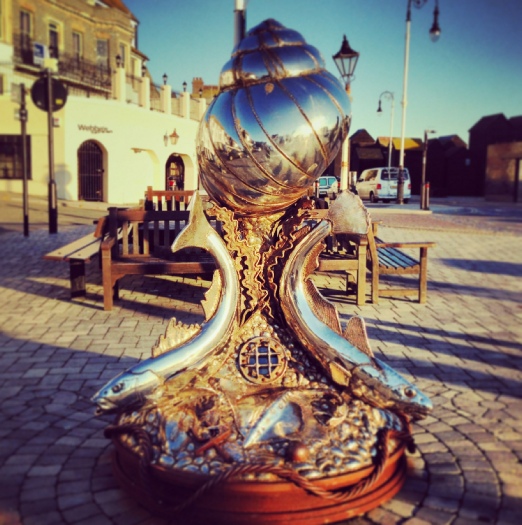 Winkle Island at Rock A Nore 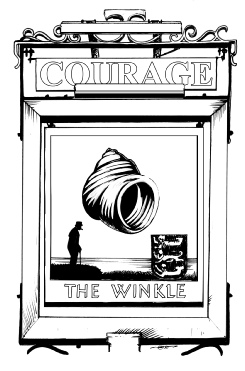 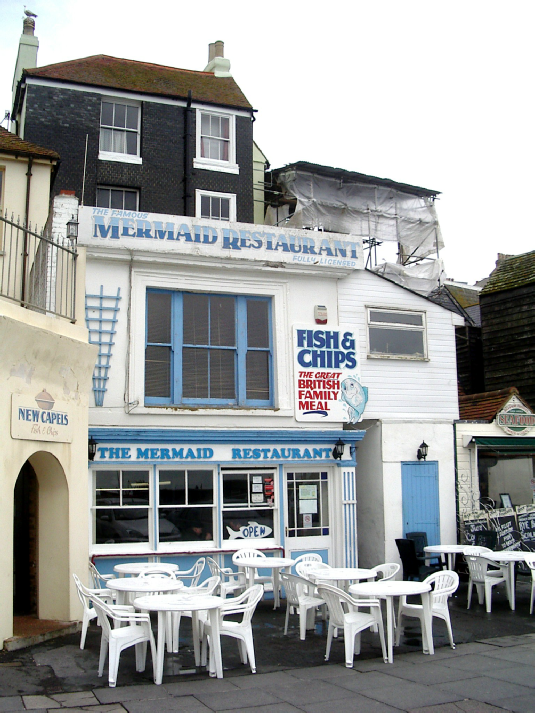 Bessie from an Old Town pub

Had joined the famous Winkle Club

When Winkles Up was cried with zest

She raised hers higher than the rest.

She wore her winkle night and day

She wouldn’t put the thing away

Even when swimming in her vest

The winkle glistened on her chest. 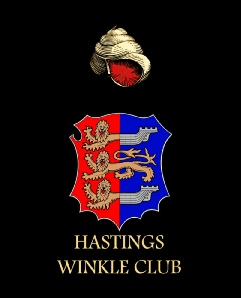