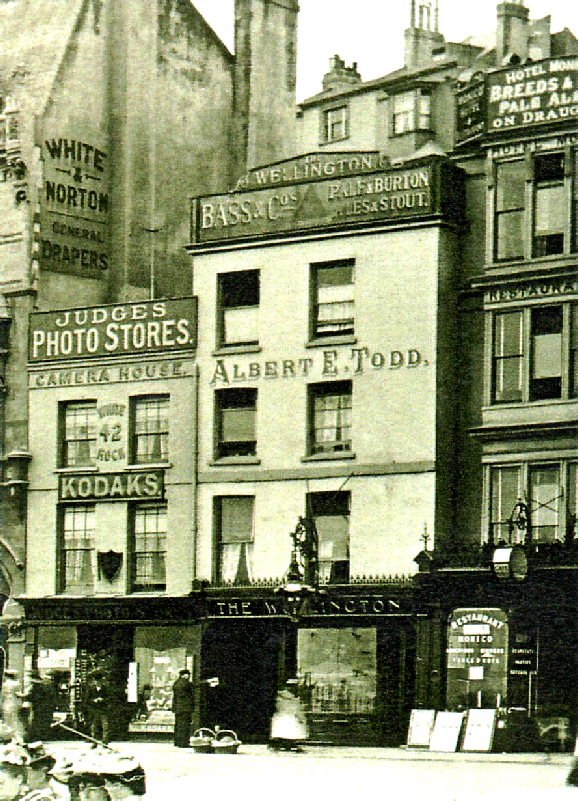 A drawing of the White Rock in 1844 shows an open space where the site of the Smugglers is today, although it was listed as the Wellington in Kelly’s Directory for 1845 and Brett noted that there were several new buildings at White Rock in 1846.

On 24th June 1850, Anthony Harvey laid a foundation stone on Robertson Street and after the ceremony, the party, accompanied by a band and the builder Richard Cramp, went to the Wellington for a celebratory lunch. In the 1850s a major source of custom came from the employees of Rock’s Coach Works, two doors away.

Some years later the pub had become more respectable, with a billiards room serviced by a billiard marker and the usual barmaids and potboy. 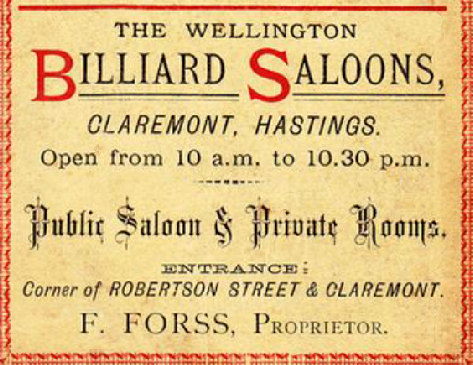 In 1891 a shoe black (a ‘shoey’), who lodged at the Bee Hive in the Old Town, was drinking whisky in the front bar with two others when he collapsed. The head barman, Edmund Clarke, and the under barman carried him along the passage to the pot room where he lay covered in blankets. When they returned at 11.30 pm he was dead. An inquest decided that he had died from natural causes, but they couldn’t discover his name and he was buried anonymously.

Before the First World War, Todd was busy challenging the competition on this part of the front line. In 1914 he protested that the Wellington was losing its middle class customers to the bar of the newly opened Grand Restaurant, opposite Hastings Pier (now the White Rock Hotel). He claimed his pub was their equal and could ‘serve all social classes with liquor’, indicating perhaps a social change in his customer base.

But then came war and restrictions. No one was allowed to ‘treat’ another person or buy alcohol for soldiers and in 1916 when two recuperating Canadian soldiers wanted a drink, someone went into the Wellington and bought them a bottle of whisky, which they drank in the Palace next door. This person was fined a steep £20. 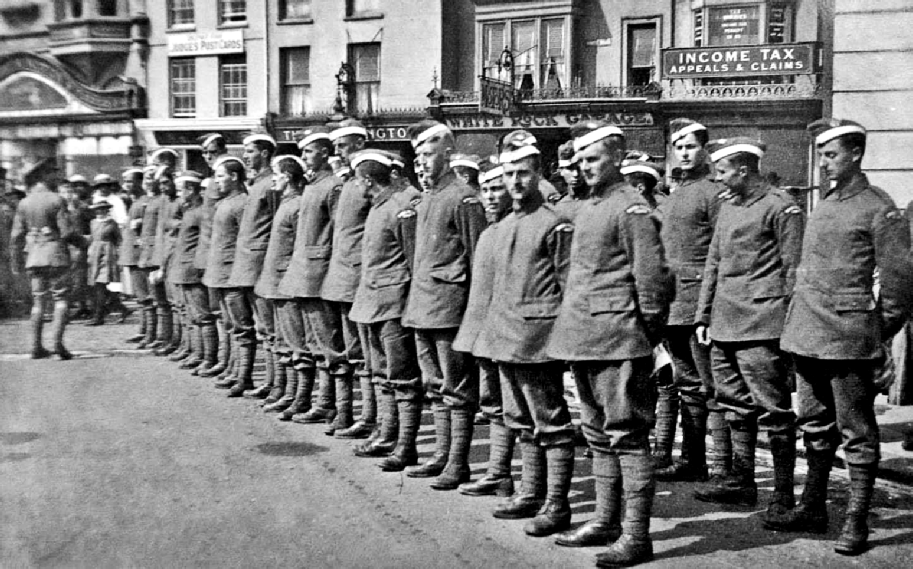 Canadian military outside the Smugglers 1914

After the war, Todd opposed the licence for a restaurant at 38 White Rock, as its customers had, up until then, bought alcohol from him. In 1924 he supported changes in pub opening hours for Hastings and was criticised for it by the local churches and the Temperance Association. In 1926 he opposed the reopening of the Palace Bars, before he retired in 1927. 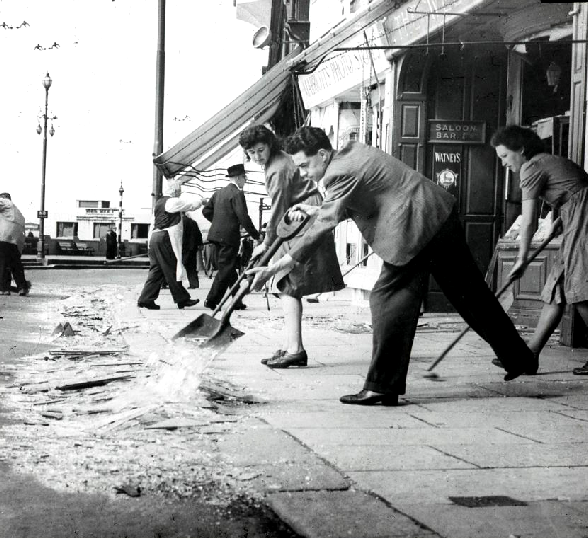 Clearing up shattered glass from bomb reverberation outside the Wellington 1944

In 1946 the landlord, James Beaven, was summonsed for serving after hours. In court he claimed: “We were having a session on spiritualism and forgot the time”. In the same year there was an outbreak of smuggling along the south coast. A Hollington man was fined £300 for smuggling whisky from France and admitted supplying the Wellington with nine cases. This incident accurately indicated the pub’s future name; however, for these two convictions James Beaven lost his licence.

The next landlord was Arthur Barber, a saxophonist and leader of the Harmony Aces Dance Band, which included his brother Bill, who played drums. The band started playing at the White Rock Pavilion in 1929 and provided entertainment for the troops during the war. In the 1930s they played on a floodlit raft in the sea between the pub and the pier and also at the West St Leonards Holiday Camp. He retired in 1968. 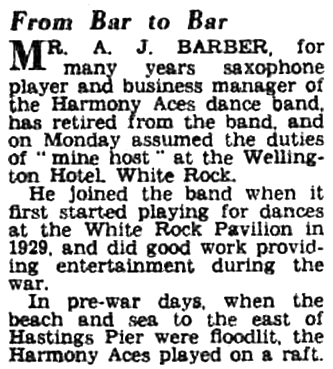 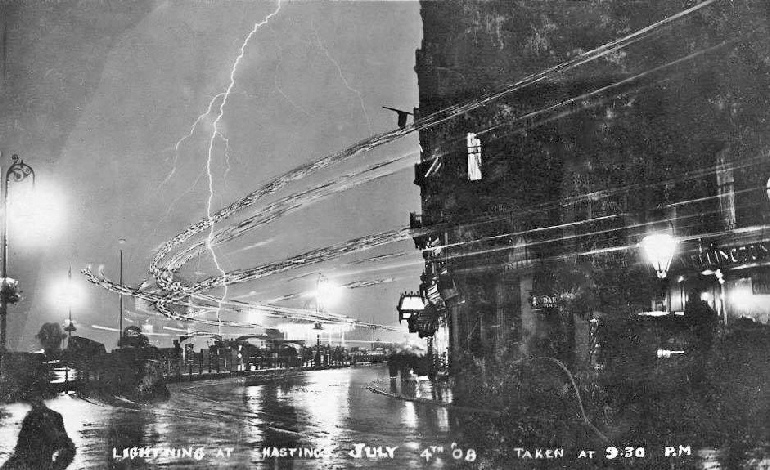 Lightening outside the Wellington 1908

In 1894 the pub was taken over by Mrs Frances Harvey, the widow of a well-known Hastings bookmaker. The police suspected the pub ‘might become a resort of bookmakers and betting men’ and she was warned. However four years later she married the proprietor of Café Monaco next door and the Wellington was taken over by Albert Todd, who was to remain for some 30 years. 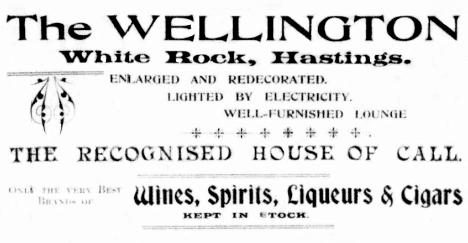 In 1995 an accident occurred when draymen were making a delivery. After opening the delivery flaps in front of the pub, an elderly woman with poor sight fell into the cellar and sustained bad injuries. Courage, the brewer, was fined £3,000 plus costs.

In his ‘Hastings Scrapbook’ local historian John Prothero notes that “the pub in White Rock was rededicated by the brewery after the last war to the Wellington Bomber” presumably to acknowledge the fact that Wellington bomber pilots were trained in Hastings during the war.  He later added a footnote: “In the early 1970s after this was written” he said, “the wrong done to the Dukes memory was righted and the Wellesley Arms”, the Arms of the Wellington family, “now appear on the sign board”.

However, no illustration of this sign board has come to light. But a drinker pointed out that it probably changed because of a post war feeling that reminders of the war should be forgotten. 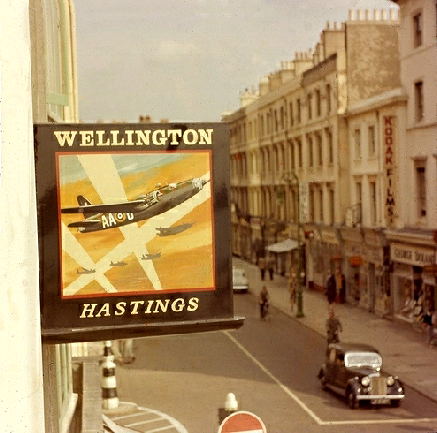 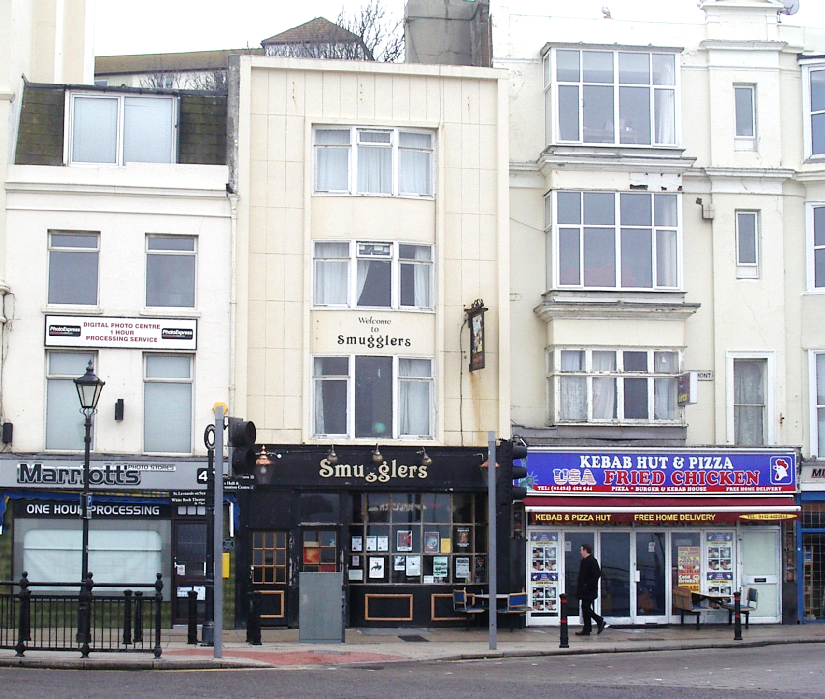 Engine Clutch and Gearbox at the Smugglers c2008  Russell 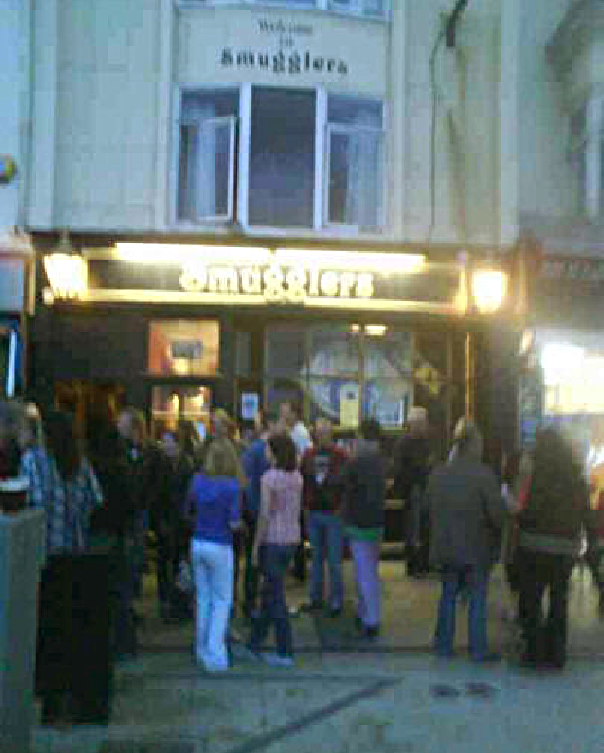 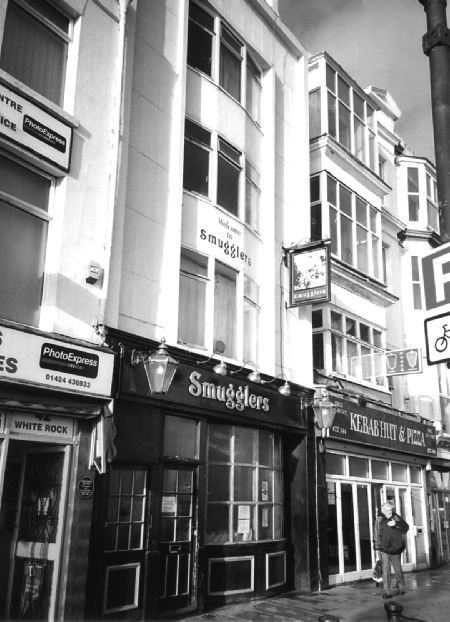 When Melanie Brampton became licensee in 1995 the sign changed again to the Smugglers. 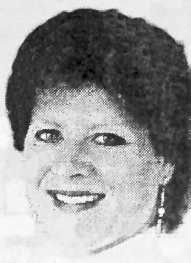 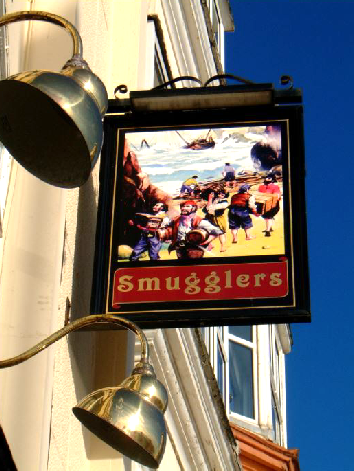