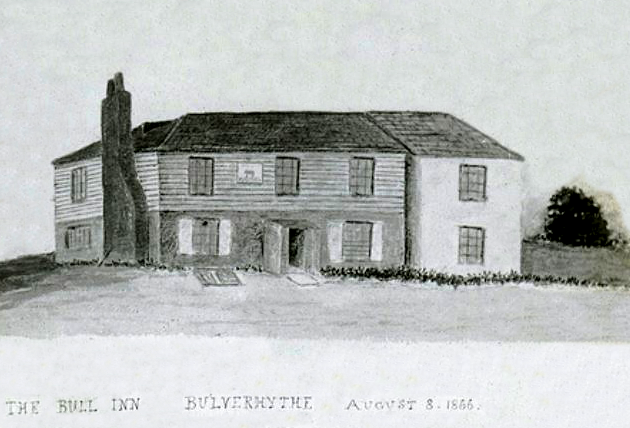 The Bull Inn stands on the site of the medieval village of Bulverhythe which dates back to the 17th century. Because of severe coastal erosion much of the village was washed into the sea and deserted by its population in the 17th and 18th centuries. Before then it was a small port belonging to the Cinque Ports Confederation where, as a ‘limb’ of Hastings it helped supply ships and men to the government.

The ruins of St Mary’s Chapel lie adjacent to the Bull and are first mentioned in 1372. The ruins are a Grade Two listed, Ancient Monument and contain stones from an earlier Norman church given by Robert Count of Eu from the College of Hastings Castle. Robert Count of Eu was a son of William the Conqueror and commanded 60 ships in the Norman Invasion. He later became Lord of Hastings. 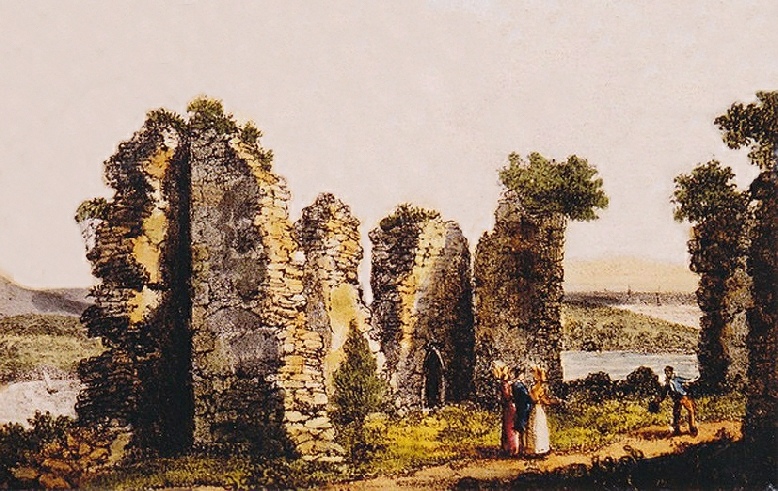 As with all churches in the 16th century when the national religion was changing from Catholic to Protestant, St Mary’s Chapel would have been a hive of community activity. Until the Protestant Reformation (1500–1650) pageants, processions, theatre, harvest dinners, dancing, music, games and brewing of Church Ales, Bid Ales and Scott Ales all took place within the church precincts. But under pressure from the Protestant Ascendancy these activities were eventually banned from the church. As a result nearby inns and alehouses flourished as they became licensed and took over these former church activities including the ancient art of brewing.

Many a parish church owned property on its boundary but outside its sanctity where these activities continued. Over time many former church houses became licensed premises and the Bull with a church virtually in its back garden was without doubt the property of St Mary‘s.

At a later date it was St Mary’s turn to provide building materials. The proximity of the two buildings, the pub and the chapel, is not a coincidence and there is evidence to suggest that stones used in the construction of the pub were taken without permission from the ruins. The existence of church coigns, or projecting corners, window sills and tracery in the Bull confirms this claim although dates are uncertain.

What is more certain is that the earliest known date for the inn is 1632 when John Woodwyn was landlord. A record for that year tells us John Woodwyn was granted a ‘tiplors’ licence by the Mayor of Hastings which he held for ten years until 1642. For the next 40 years until 1681 the building was known as Bulverhythe House after which the name changed to the Bull Inn. Whichever date you choose (1632 or 1642) makes the Bull the oldest pub in Hastings. However, deeds for the building exist (only) from 1736 to 1760.

During the 18th century or earlier, the Bull it seems was known as St Mary’s. Records show that a licence was granted by the Hastings Bench to Joseph Kenward for a premises of that name, from 1724 to 1759, a period of 35 years. During this period in 1749 the Amsterdam, a Dutch ship travelling from North Holland to Indonesia, encountered a severe storm in the North Sea and lost her rudder. She attempted to anchor but drifted ashore at Bulverhythe where she sank into the beach mud. It is believed that the crew and the rescue party were accommodated in the Bull. (See the Bulverhythe.)

Fifty years later the construction of 73 Martello Towers along the south-east coast began in 1805 as a response to a threatened invasion by Napoleon. The towers were complete by 1806 but after Nelson’s victory at Trafalgar they became redundant. Three of the towers, numbered 40–42, were located on Bulverhythe Salts. Number 40 was blown up in 1873 when the sea undermined its foundations. Number 41 was swept away in a storm in 1843 and number 42 was undermined by the sea in 1840. A fourth tower, number 43, located on Bulverhythe cliff opposite the Bull, was dismantled in 1868. The towers, described as ‘lonely sentinels on the lookout, on guard and on watch’ all provided custom for the Bull as no doubt did the local smuggling fraternity. 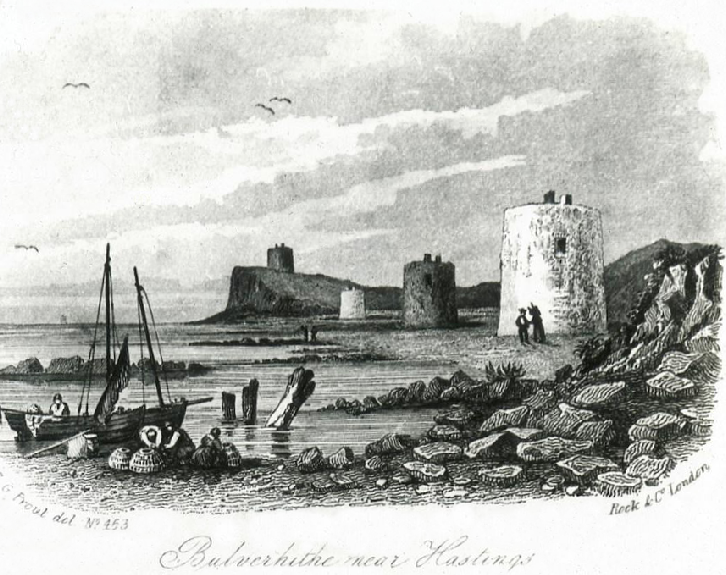 The London, Brighton and South Coast Railway arrived in 1846 with a temporary halt on Bulverhythe Salts a little to the east of the Bull. Passengers waited in the Bull before continuing their journey into Hastings by coach. John Neale, later landlord of the Lord Nelson, was Hastings’ last stage coach driver. He drove the Dispatch, a three-horse omnibus plying between the temporary railway station on Bulverhythe Salts and Hastings. One can visualize the Bull Inn as a refuge for travellers waiting for the coach to take them into Hastings. The Stage Coach was later replaced by the first bus and the Bull Inn became a terminus of the Hastings and St Leonards Omnibus Company.

A drawing by Victorian artist Charles Graves (1835-1918) shows a train traveling over the open Salts. The lonely Bull Inn, the only building to be seen, has extensive views over the adjacent countryside to the sea and the coast. This drawing probably dates from the 1870s.

When the Bull was sold by auction in 1826, it was described as having uninterrupted views of the ocean, Beachy Head and the South Downs. Because of its location it had an extensive and excellent trade and, the auctioneer noted, ‘was frequented by visitors from the watering places of Hastings and Bexhill’. The auctioneer’s description of the pub states it had ‘seven chambers, a large parlour, a bar, a taproom, two cellars, stabling and a productive walled garden’. 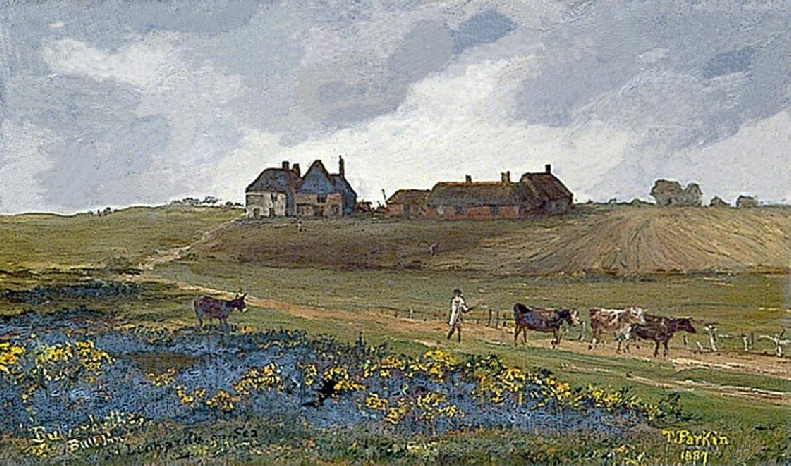 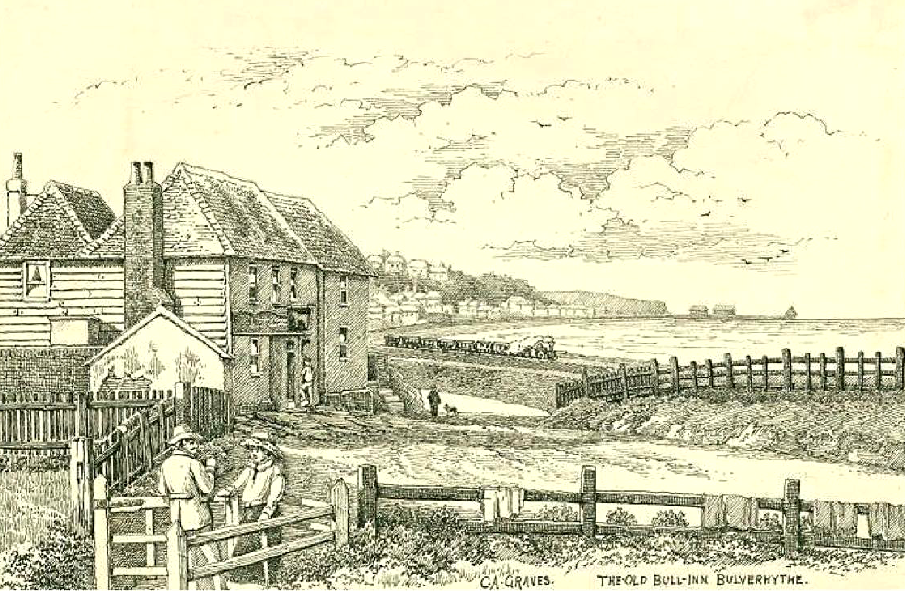 This also explains why Pelham is a common local name. Large areas of land including Bulverhythe belong to the Pelham Estate and many streets and pubs with that name can be found in Hastings, Lewes, Seaford and elsewhere.

By this time the Bull was a centre of outdoor activity. ‘Amid the charms of thorough rusticity’ said one report, the rear of the pub had become a rifle range and was a popular centre for pigeon shooting. The Bull Athletic Club organized 6 mile runs along the coastal path from Claremont and the East Sussex Fox Hounds assembled in the Bull yard.

The ‘Bull’ is a common pub name in England but local folk lore claims the name has a different, unique origin. The story goes that:-

‘at the Conquest William gave to one of his warriors

named Pelham as much land on the coast as he could

cover with a bulls hide, whereupon the warrior came

the ‘old solder’ over the Conqueror by selecting the

up into shreds and so covered a much larger slice of

land than was contemplated….. So came the name of

Bulverhythe, or Bulls Hide, whereat in later years was

set up the Bull Inn…’ 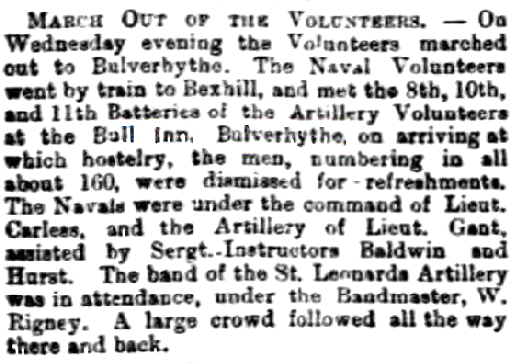 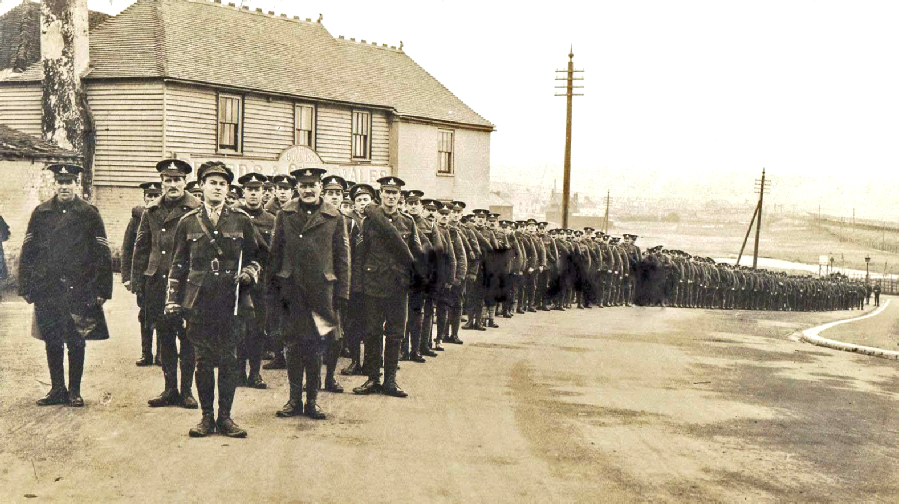 No. 4 Company Royal Artillery route march past the Bull c1914 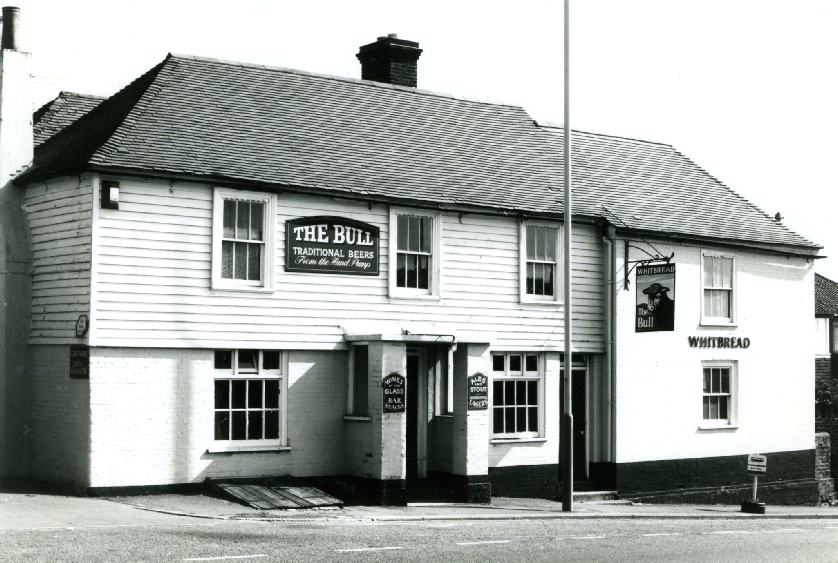 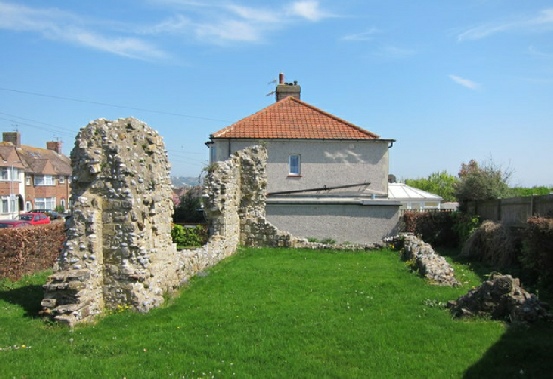 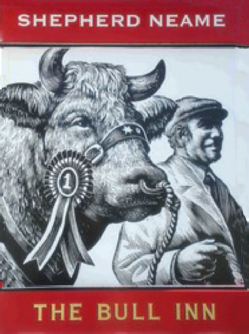 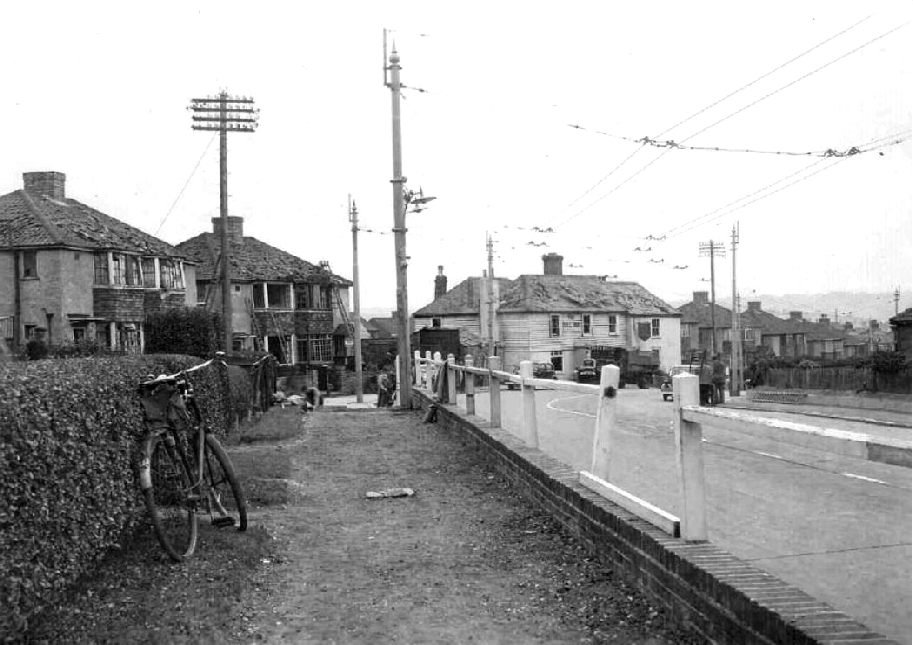