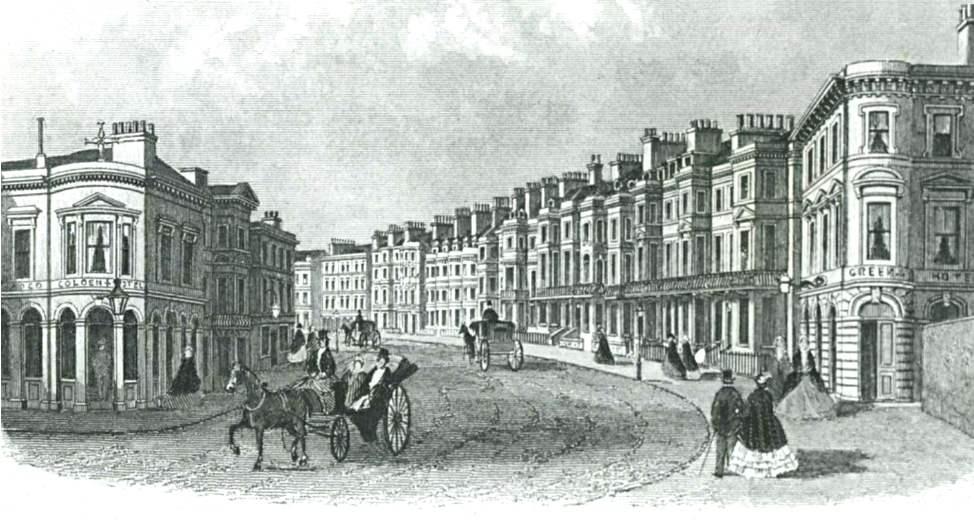 Crowleys Bar in Havelock Road first opened in 1857 as the Old Golden Cross. In 1899 the pub was demolished and rebuilt ‘as the best Hastings has to offer’. We re-publish the original article from the local press announcing the reopening of the new building:

‘Everyone who has had occasion now and then to pass the corner where the humble front of the original Old Golden Cross reared itself, a few months ago, to gaze over the desolation of the station yard, must have watched with interest and–as the hoardings and scaffolding grew too small to hide its growing beauty–with admiration the splendid structure which has risen upon the site of that historic hostelry–a structure worthy of its position and of the best of its surroundings, and worthy, too, of the important aspect which that corner will receive when, as must eventually happen, the station buildings are brought right out to the top of Havelock-road. For such a place as the new Old Golden Cross the site is now, with but one or two exceptions, the best that it could have had in Hastings; and when this improvement is brought to pass it will probably be unapproachable—both from a business and an aesthetic standpoint. The immense change for the better in the impression made by a first view of Hastings upon the arriving traveller, fresh from the smoky darkness of the St Leonards tunnel, by the erection of a really artistic building at the first corner that meets his eye, will be readily admitted by anyone who has passed out of the station since the hoardings round the new building were removed. It ought to earn for Mr A J Jones, its proprietor, no inconsiderable amount of public gratitude.’ 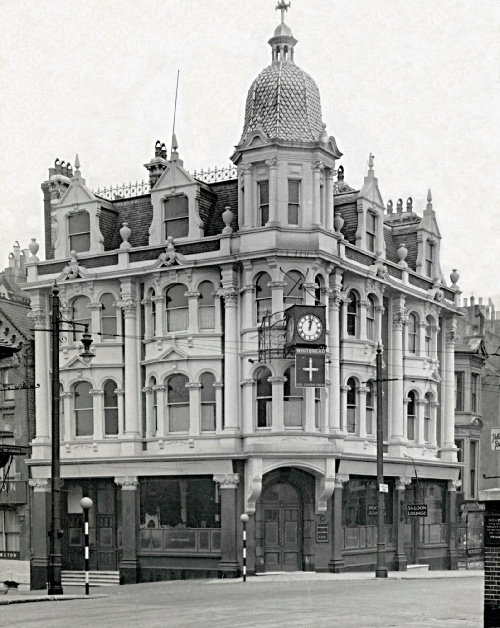 ‘Into the external details of the palatial hostelry which was opened on Wednesday last we need not enter at very great length —they are sufficiently well known to every pedestrian in the borough; and, further than that, no amount of descriptive eulogy can do justice to their genuine artistic beauty and satisfying effect. The style is a modern modification of the Renaissance and its chief feature, apart from the cupola with the dazzling cross on top, is the series of handsome columns which outline the windows. The cross, by the way, is said to have acquired for the house the reputation, with people viewing it from a distance, of being a new and important monastery or other religious edifice, but this rumour is unconfirmed by direct evidence. The sign at the corner, a handsome wrought-metal device, is inconspicuous until lighted up, when its effect is very brilliant. All the decoration in solid carved stonework is the best of its kind, and the ground-glass windows of the bars are of admirable delicacy and purity of design. But before passing in to examine the comforts and beauties that are to be found within these highly-decorated walls, it might not be amiss to say something of a feature which is of more importance to a licensed house, perhaps, than the whole number of architectural beauties and luxurious fittings that it may possess—the personality of the proprietor. In answer to a question later on as to the liquors which would be dispensed across his bar. Mr Jones emphasised the fact that the house was his own freehold, and that all goods supplied would be the best that he could obtain.

‘A PLACE OF LUXURY
After interviewing Mr Jones as much as his conscience, in view of the obvious distractions to which that gentleman was subject, would allow, the representative of the ‘Observer’ secured a cicerone, and proceeded on a tour of inspection of the entire premises, beginning at the top and at the kitchen and scullery which he found replete with every feature of modern domestic appliances. A cursory examination of the upper part of the house, which is admirably laid out and free from the skimpy little attics common to that style of architecture, brought him to the public rooms on the first floor, which comprise the billiard-room, the club-room, and a reception-room or two. The billiard-room, which occupies the corner facing the station entrance, and consequently has all the light that could be wished, is a magnificent piece of decoration. Indeed, it is hardly necessary to repeat this statement concerning each room one comes to, for the mere fact that the entire upholstering and furnishing is the work of Maple and Company, of Tottenham Court-road, is sufficient to warrant its artistic excellence. It contains one table, sufficiently distant from obstruction; and lighted by six powerful electric lights; and when our representative walked in he found Mr Chase, of the Carlisle, and a couple of friends already engaged in playing the first game upon it. It is the work of Messrs. Wright’s, and is complete and perfect in every particular. The room, however, deserves a word of description. Hung with a heavy embossed gold paper, with a large and beautiful design of chrysanthemums, and fitted all round with lounge seats in rich leather and dark woods, its final touch is given it by the high and graceful fireplace, which occupies one end, executed in a modern adaptation of old manorial style, and completely in harmony with the rest of the furniture. The ceiling is panelled in plaster relief, somewhat plain, but extending down into a richly-modelled frieze of considerable depth, whose pattern is partly based on the chrysanthemums of the wall-paper. Altogether, it is a room not only to play billiards in, but to admire. 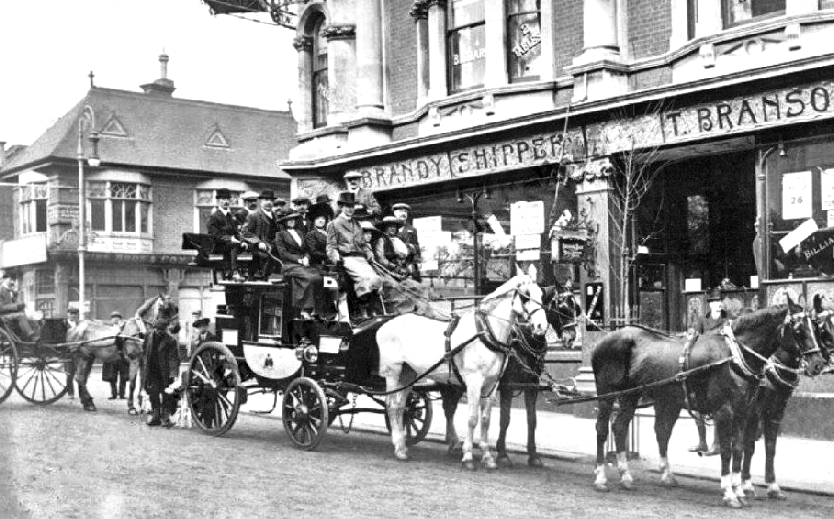 ‘THE CLUB-ROOM
Next to the billiard-room is the apartment fitted up for the use of secret societies, “friendlies,” and such-like, which is dazzling with the symbolism of the Druids, the Freemasons and the Ancient Order of Buffaloes, of which last body the host is an officer of high rank. The room is a long and imposing one, decorated somewhat similarly to the billiard saloon, but with paper of finer pattern, and a more ornately-moulded frieze and ceiling. At its far end, and in front of the projecting carved window, is the curtain dais where-on will rest the throne.  The decorated pedestals–appropriate, we believe, to the Druidical ceremonies–are prominent, and long mahogany table, surrounded by handsomely decorated chairs, complete the room’s equipment. It was not entirely ready for use when the ‘Observer’ representative visited it, but it was sufficiently advanced to show that it will rank with the best chapter-rooms in the borough for convenience and style. ‘The fire-proof safes were supplied by Messrs. Beater and  Company, 94, Queen’s-road, Hastings.

‘From the billiard-room and reception rooms, which latter are decorated and upholstered in much the same magnificent styles, though with a different colour scheme, a dividing stairway leads one down to either the side entrance on one hand or the saloon bar on the other. The ground floor is divided by handsome dark word partitions into four sections, of which the public bar, though the plainest of the lot, is a model of comfort and pleasantness. Its substantial perforated wood benches are replaced in the two private bars and the salon by luxurious lounge sofas and easy chairs, all upholstered in morocco leather and forming a perfectly ideal rendezvous for a quiet drink and a little chat with a friend. The saloon contains also a handsome tapestry hanging, representing a historical subject, and framed in heavy plush velvet, which adds not a little to its dignity and comfortable appearance. The bar fittings are throughout the work of Matthews, of Walworth-road, London, the bar itself is veneered in

‘DARK MAHOGANY
the fixtures being not too prominent, and the whole effect is most satisfactory. In the centre of the square within the bar stands Mr Jones’ office, an airy, spacious apartment, from which he can command all things, like a General, surrounded by his staff. Mr Jones’ staff, by the way, consists of a bevy of damsels as charming and dexterous as ever was the celebrated Hebe, who waited on the assembled gods of Olympus, who, however delicious and unapproachable was the nectar they drank, certainly never took their liquid refreshment in a maple-fitted bar like that at the south-east end of the Old Golden Cross.

‘But we have omitted to make any mention of the electric lighting, the lamp brackets of which are one of the most striking features of the decorative scheme, especially in the downstairs bars. The whole installation has been carried out by the Southern Electrical Engineering Company on their free-wiring system, and is a splendid example of the latest things in art glass globes and art brackets. Including the great sign in front, there are about two hundred lamps in the house, requiring no small amount of current when all are turned on at once. Spacious cellars and vaults complete the scheme of the building, which is executed by Messrs. Maple and  Co. from the design of Mr Clayton Botham, of Brighton, a specialist in the planning of the modern palatial public-house. All the best features to be found in the great Metropolitan saloons of recent construction are reproduced in the Old Golden Cross, its proprietor having spared neither money nor pains to make it the finest obtainable. As an addition to the architectural attractions and to the places of public resort in this borough, the new hostelry is of the highest value, and on the safe general principle that there is always room at the top,” it is bound to succeed. At any rate, it deserves to.’

In the years before the First World War the Lodge room on the first floor became licensed for cinematographic performances. From 1911 the Lodge was one of Hastings first cinemas showing occasional early films. 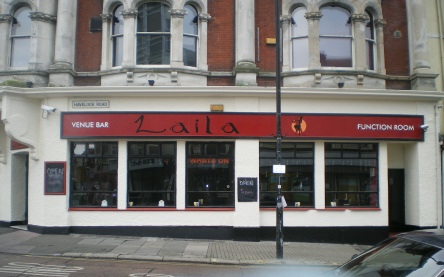 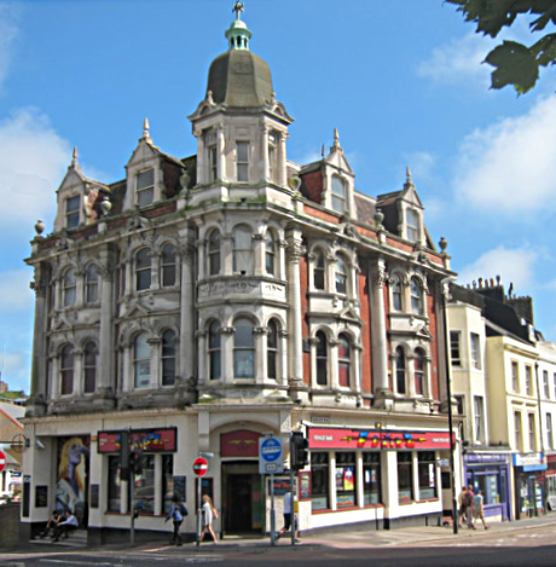 Aleister Crowley’s portrait can be seen in the ground floor bar. He was an occultist, Satanist, magician and mystic, who lived in Hastings from 1945 until his death in 1947. He practised sex magic and black magic and gained a notorious reputation. His detractors believed that he was the secret grandfather of George Bush and that he was responsible for putting the ‘curse on Hastings’.

The Robert De Mortain pub, on the Ridge, became redundant and was closed in its 70th year. From 1947 it was inhabited by Aleister Crowley’s ghost. After the building was demolished in 2017, Crowley’s ghost, now homeless, moved into the town centre. The ghost now resides in Crowley’s Bar. The first and only Hastings ghost to have a pub named after him! 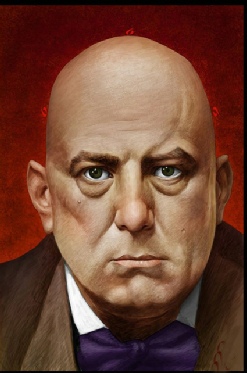 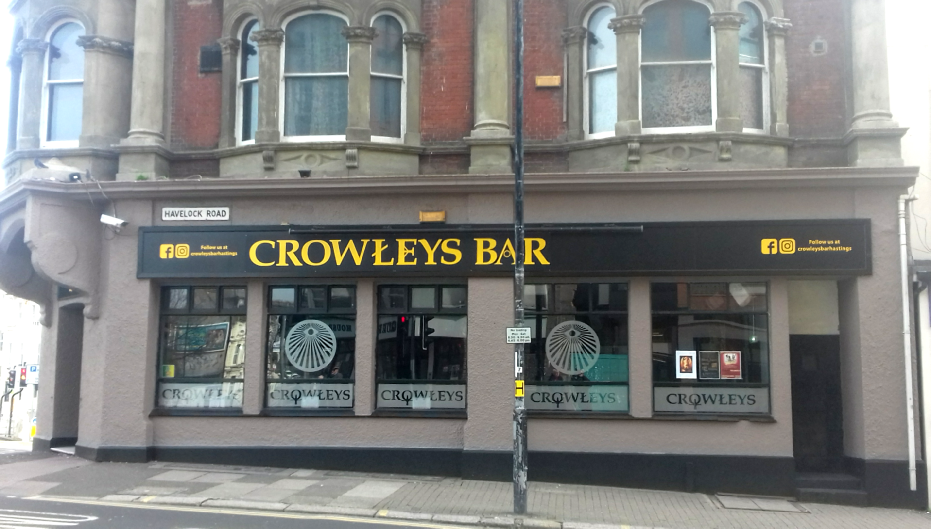 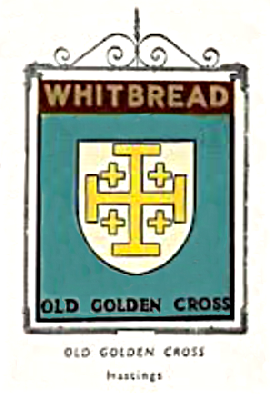 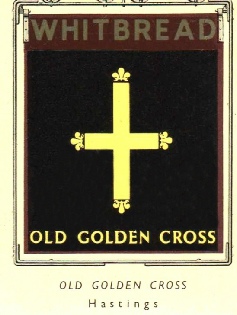