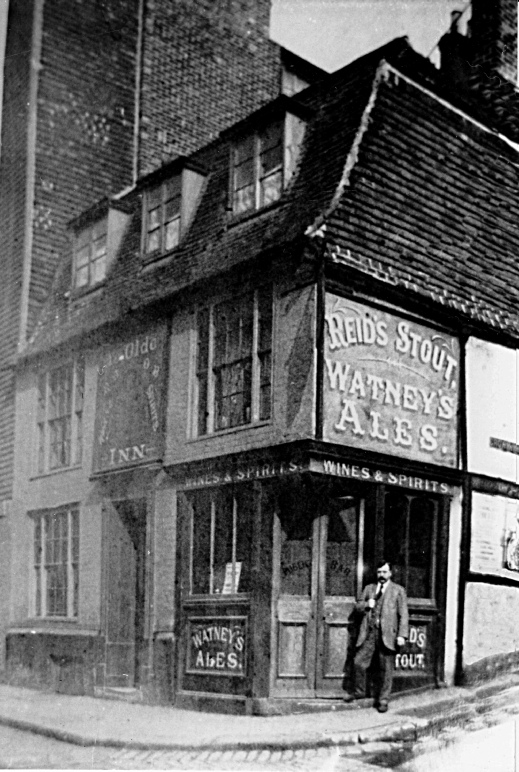 The original Crown Inn was located on the south corner of Courthouse Street and High Street and dated from the 16th century. The street was re-built after a fire in the Tudor period, which all but destroyed the area.  There has been a pub on the present site since 1794 when the Crown was a coaching inn. It was licensed to the Smith family from 1815 to 1832.

In the early 19th century, the Crown and the nearby Swan were described as ‘the principal rendezvous of gentility’. As early as 1817 Hastings was so crowded in the summer months that the Crown had its loft fitted up as sleeping quarters for the servants and engaged up to 30 other beds off the premises. Coaches set off for London, Brighton and Dover from here. An advert in 1816 declared: ‘The Crown Inn coach sets off every morning at 8 am and arrives in London at 6 pm. It is driven by the most experienced coachman.’ 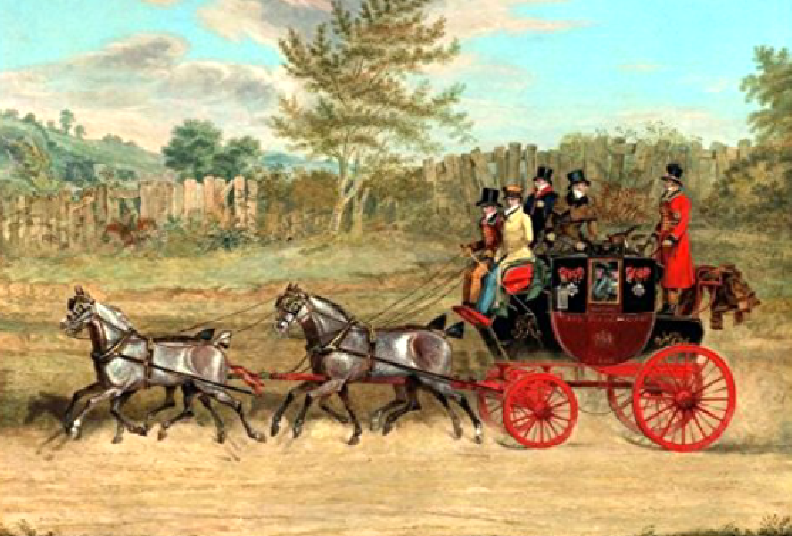 The Hastings London coach. A painting by James Pollard 1821

Powell’s Hastings Guide for 1831 said Mrs Smith ‘deserves particular commendation and support, as being the first (with a family of seven children) to add to the accommodation of visitors by every species of comfort, neatness, and domestic attention’. However her time as landlady ended in bankruptcy in 1832 which marked the beginning of a period of decline for the Crown Inn. In 1839, for example, two members of the Hastings police force, an inspector and a constable, were charged with ‘neglecting their duty wantonly’ and ‘degrading the character of the Hastings police’, by drinking ale and rum in the Crown from ‘noon till 7 pm in the company of two women of ill repute’. In the evening when they retired to an upstairs room ‘the Inspector was so intoxicated’, a witness stated, that ‘he went upstairs on his hands and knees’.

Another example was reported of an evening in the 1850s. A ‘preventive man’ [customs officer] had his purse stolen while having a quiet drink in the bar. The purse was eventually retrieved from a woman’s bosom, empty, after she tried to swap it for a glass of gin. On another occasion a constable heard ‘indecent, noisy language’ coming from the Crown and found five men and seven ‘girls on the town’, in a side parlour. One of them asked him to have a brandy, and a butcher, who was having supper in a little back parlour, admitted there were some ‘improper characters’ in the bar.

Around the same time, an Irishman known as Old Jack was buried at All Saints Church. A wake was held in the Crown and it was reported that ‘everyone was thoroughly inebriated and set the neighborhood in an uproar with their strange freaks’. In 1856 a German, who lodged at the Crown, was also buried at All Saints’, after cutting his throat. A German band played the Death March.

Like most Old Town pubs, the Crown ran a common lodging house located in a yard in Crown Lane, where on one occasion a man had his dinner (a sheep’s head) stolen by a drinker in the tap. The Crown lodging house was included in a survey of the sanitary conditions of Hastings in 1850. In the Crown yard the survey found 13 beds in a converted stable loft without running water, drainage or a ‘privy’. The accommodation was organized by John and Mary Huggett who charged two shillings [10p] per person per week. Mrs Huggett paid the landlord half the income she received, did the cooking and washing and supplied coal and candles. There was no toilet, water supply, drainage or electricity.

Forty years later conditions had improved. A large Buffalo Lodge was established in the 1890s. Their meetings raised primo members to ‘degrees of knighthood’, where they drank each other’s health dressed in Buffalo regalia. In 1898 the All Saints’ Conservative Association held social evenings here and in 1900, when the Boer War broke out, a large gathering of local dignitaries gathered to give patriotic, nationalist and jingoistic support to the local volunteers who had been dispatched to South Africa. 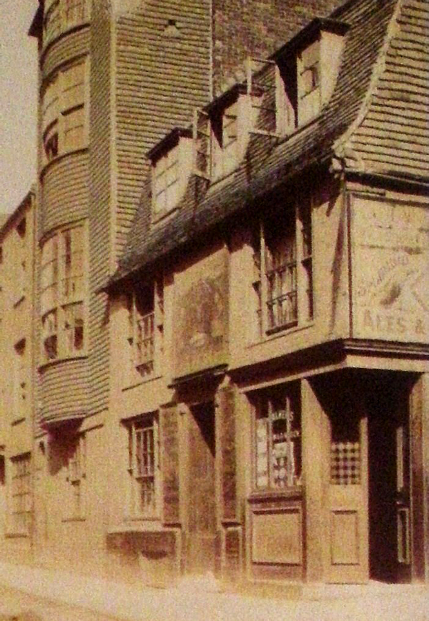 In the early 1900s this once large inn, by this time known as Ye Olde Crown House, was reduced in size. The landlord from 1902–1907 was Alexander James Littlejohn. After his time here he went to sea with the White Star Line as a steward, and in 1912 he joined the ill-fated Titanic on its maiden voyage. His grandson Phillip Littlejohn explained: “My grandfather was a first-class steward on the Titanic but survived the ordeal after being ordered to row lifeboat 13. It was in this boat that the youngest passenger aboard, nine weeks old Millvina Dean, was rescued. She became the longest surviving passenger and died in 2009 aged 97. Her forward ports [the ship]were under water and we could see the lights gradually go out on E deck …. All her other lights were burning brilliantly and she looked a blaze of light from stem to stern. We watched her like this for some time then suddenly she gave a plunge forward and all the lights went out. Her stern went right up in the air; there were two or three explosions and ... immediately after there were terrible cries for help. They were awful and heartrending.” 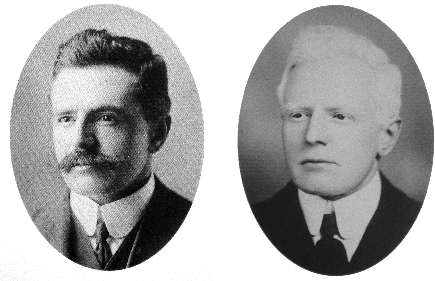 Landlord A.J. Littlejohn before and after the Titanic disaster Phillip Littlejohn 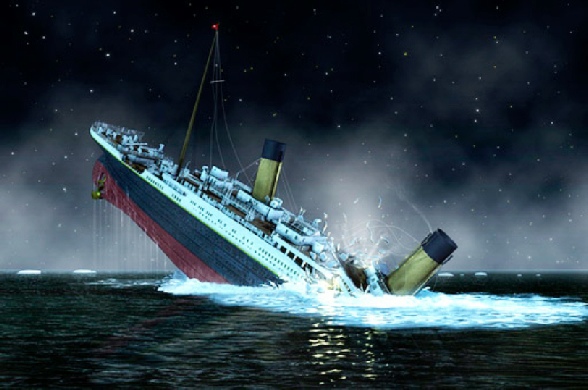 In 1921 a fire destroyed the pub and it was rebuilt. In 1985 it was completely refurbished and became Harvey’s first Hastings’ pub.

In 1998 the landlord was Alex Napier ex-drummer with rock band Uriah Heep. When Phillip Littlejohn visited the Crown whilst researching a biography of his grandfather, he was astonished to find that Alex Napier called time on a reproduction ‘Titanic’ brass bell kept behind the bar. This was pure coincidence, as the connection between his grandfather and the Crown was unknown outside the family. 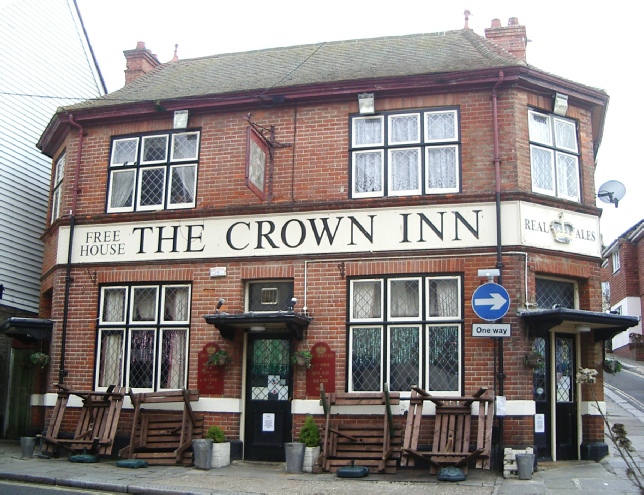 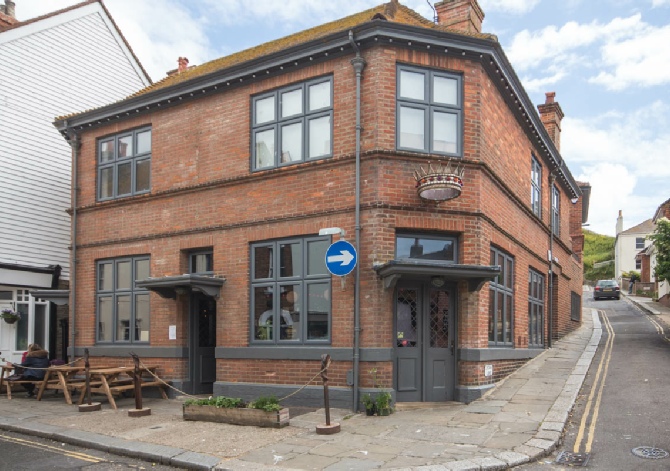 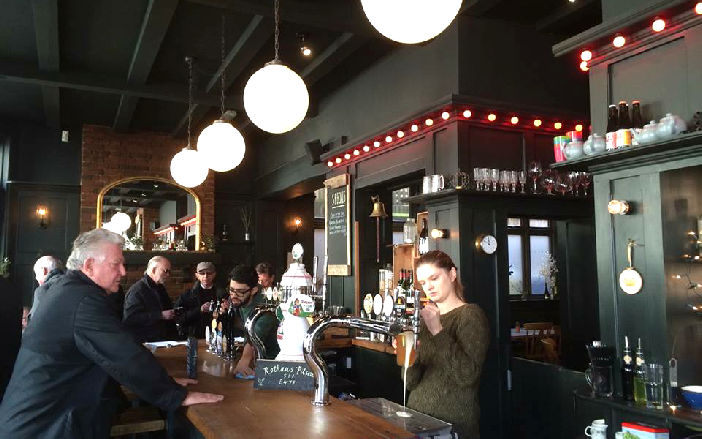 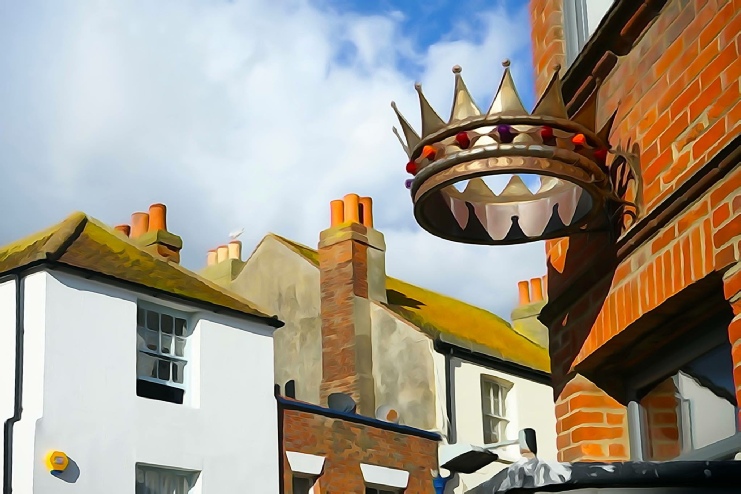