The Pig’s Palace, formerly the Palace, the Pig in Paradise and before that the Palace Bars, is located on the ground floor of one of Hastings’ most prominent buildings. The first building on this site was the Seaside Hotel built in 1835, which in 1872 became the Seaside and Pier Hotel. It was rebuilt in 1886 as the Palace Court Hotel but like other hotels in the town, for example the Old Golden Cross or the Havelock, the investment required did not produce an adequate return and consequently its prices were higher. In 1889 a glass of wine in the Palace cost 6d [2½p] whereas elsewhere in Hastings it was 4½d although the Palace claimed its wine ‘was as good as the Bodega’ (now French’s Bar). After more investment and alterations in 1894, it reopened ‘with electric light in all public rooms’ powered by dynamos installed in the caves behind the building. 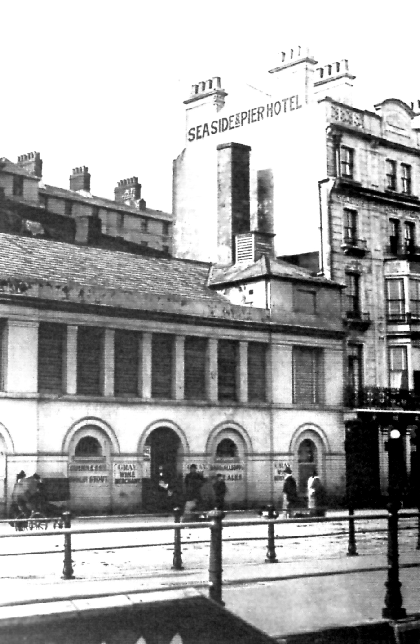 The wages earned by barmaids came to prominence in 1891. In that year a barmaid was dismissed for misconduct and applied to the courts for a month’s pay of 30s [£1.50] in lieu of notice. The manager, when asked the reason for her dismissal, said she had been kissing the customers. The question is, asked the magistrate, “Did she kiss a customer or did a customer kiss her? Did she kiss or was she kissed?” It was established that two male customers had kissed the barmaid, which was technically an assault and therefore she could not be accused of misconduct. She received a month’s wages in lieu but lost her job anyway.

In the early 1900s the Palace Bars was the home of the Hastings and St Leonards Debating Society, which met to discuss issues of national and local importance. Alf Cobb, local socialist firebrand, was a regular member of the club which functioned until the First World War. In 1909 members debated tax, the budget and Sunday closing of public houses, a popular topic with temperance campaigners. 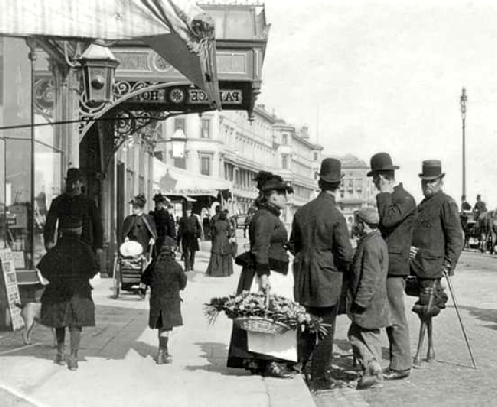 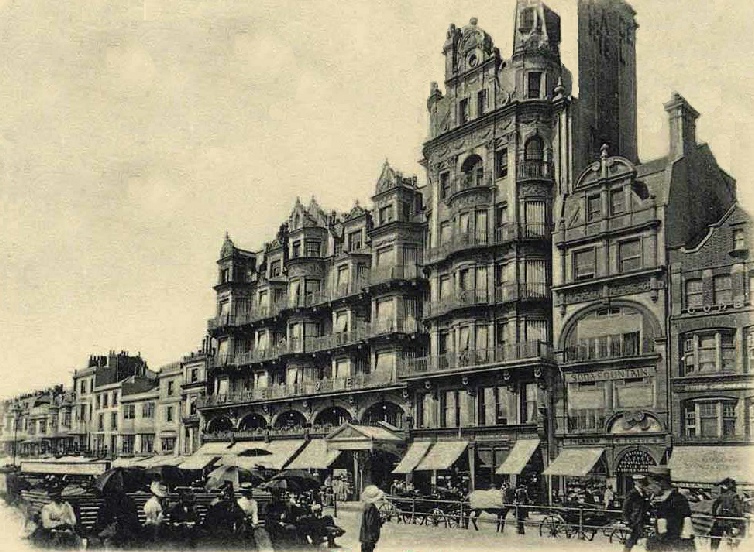 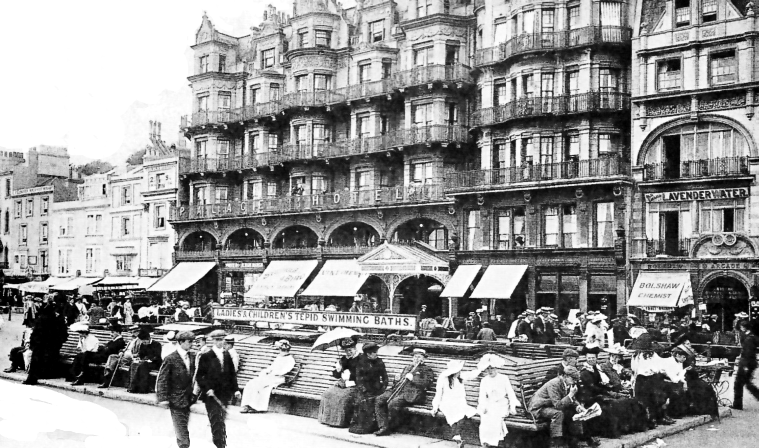 In 1917 the Palace Court Company went into liquidation and the building closed to the public although it was commandeered by the army as a barracks during the war. Struggling financially it was described as ‘Hastings’s white elephant’.

Nevertheless, Captain Vincent Moss formerly landlord of the Imperial in Queen’s Road, took over the bars and restaurant in 1926, after the rest of the building had been transformed into high class apartments. The refurbished Palace Bars included a new lounge designed as ‘a bowl of flowers’ with giant spikes of gladioli and columns of asters. There were thick pile carpets, a silver service, a Piccadilly chef and wallpaper with a silver tissue pattern over scenes of gondolas. It had a Persian tearoom for ‘intimate tête à tête over the tea table’. In the ‘swinging 20s’ the Palace Bars was the place to be seen.

It reopened to acclaim in 1927 and the licensee applied to open up the caves behind the building as a meeting place for the Ancient Order of Druids, which claimed 400 members. Although the caves were fitted out with lighting and ventilation in expectation of being granted permission, the application was refused and the caves were possibly never used. 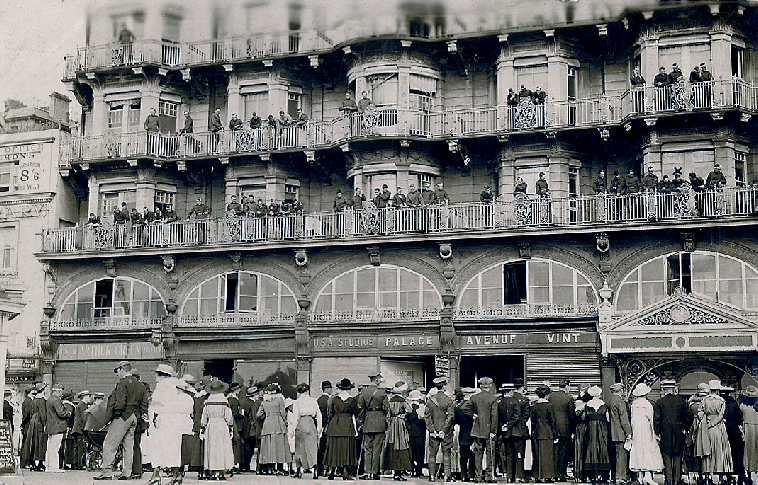 Palace Hotel as a barracks c1917 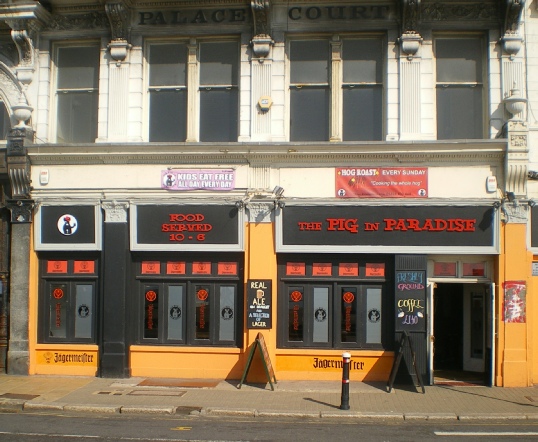 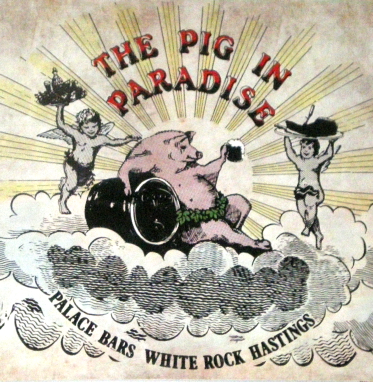 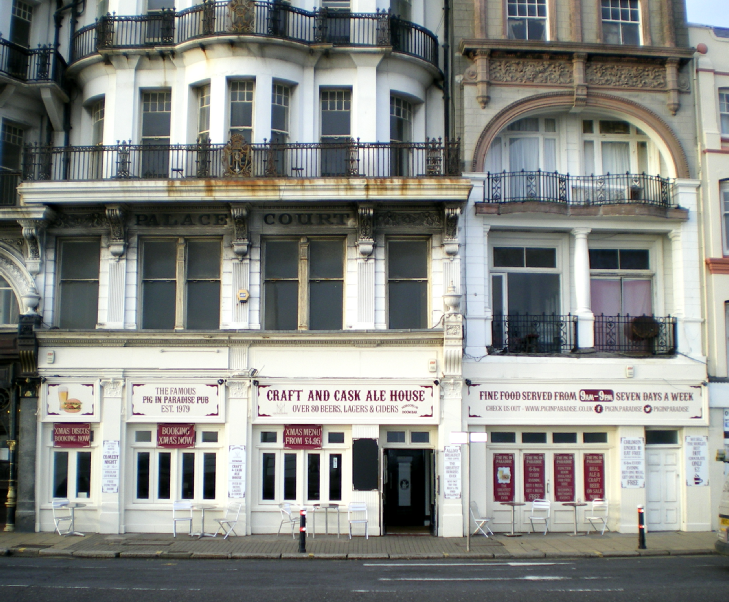 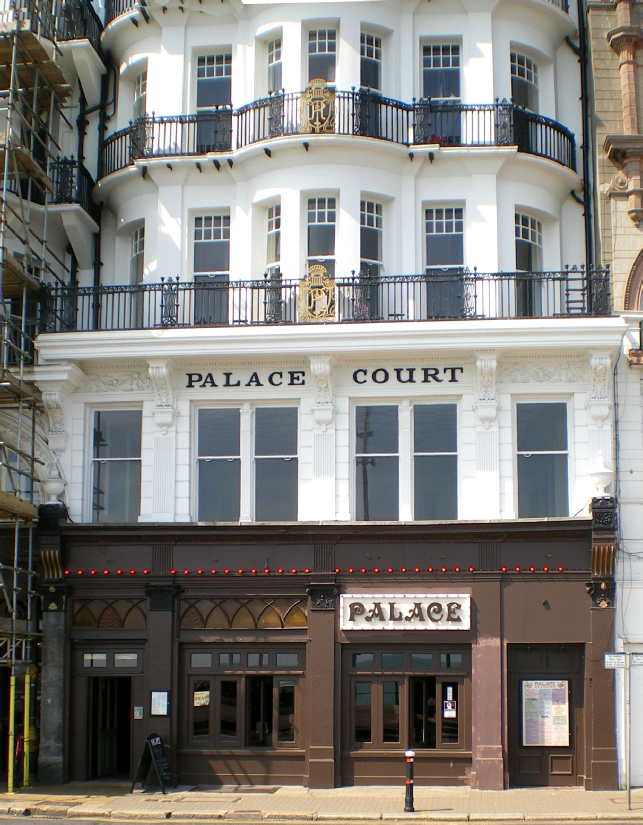 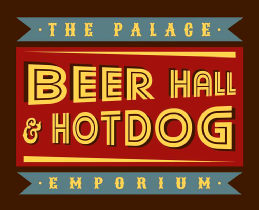 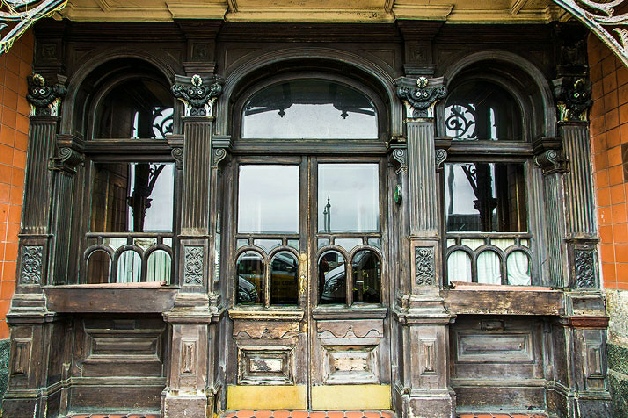 Around 2015 the Pig changed its name to the Beer Hall and Hot Dog Emporium. Shortly after it became the Palace, and in November 2018 became the Pig’s Palace, its eighth name change in 182 years. 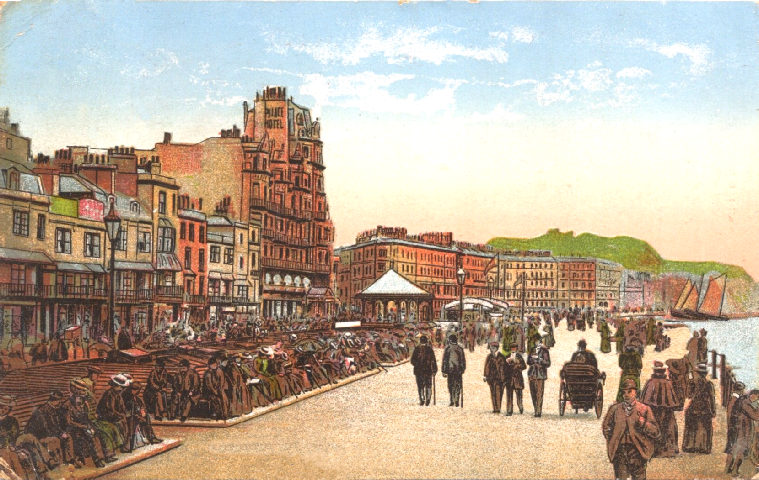 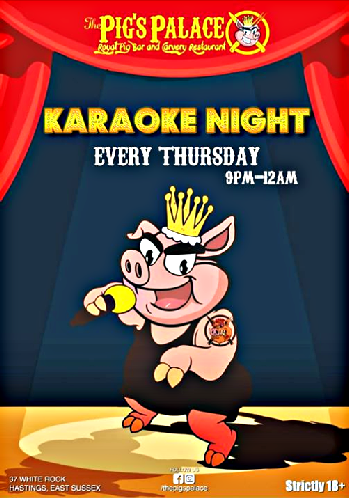 Cyril Pelluet recalled good times in the Palace Bars after the war. “In the late 1950s”, he says, “it was run by Fuller and Swatland. The head barman was Matthew Hart, a sort of big brother or uncle, always immaculately turned out in a white jacket and slicked back hair. It had a very long bar and the right hand corner was known as Matt’s corner. His equally affable sidekick Ted was known as ‘the stomach in a white coat’. The Palace Bars  was quite a smart place. At that time National Service was still on and a lot of us servicemen and ex-servicemen, used to meet up there―a happy atmosphere and a lot of camaraderie.” 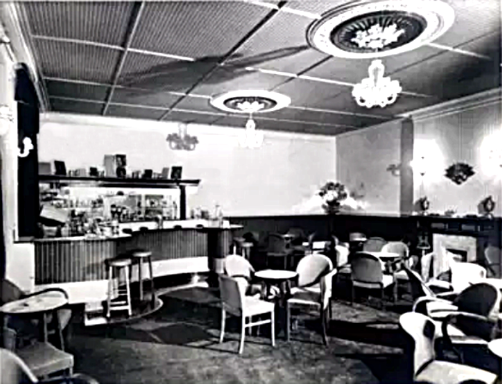 In 2012 the Pig’s Palace was the location of Byzantinium a film described as a ‘horror, fantasy, thriller’. The story concerns a mother-daughter vampire duo who move into a run down seaside hotel while hiding out from other vampires. One critic described the film as “seductive, sadistic and elegantly depraved, Byzantinium is an unabashedly stylish addition to a timeless genre.”

The bar became an occasional cocktail lounge featuring a ‘Flairhead barman’ who entertained the customers by juggling  bottles, glasses and cocktail shakers. 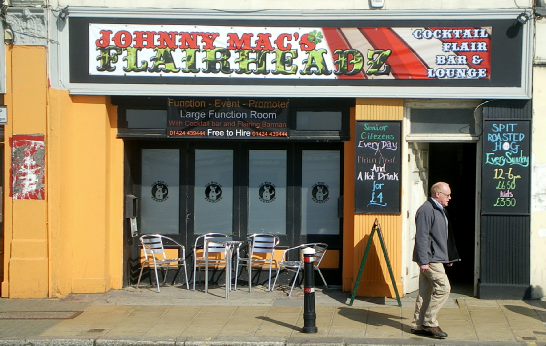 In the 1970s the Palace Bars became the Pig in Paradise, an ‘alternative’ venue describing itself as an ‘Ad Hoc Arts and Performance Centre’. In 1984 Roger Carey celebrated his 1,000th gig here, with a collection for Ethiopian Famine Relief. 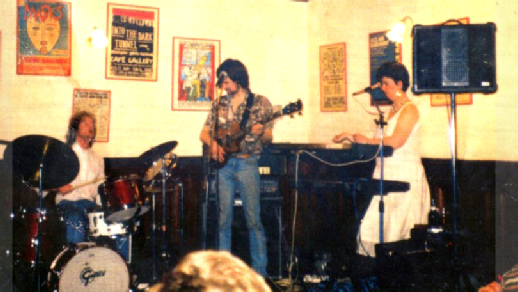 Roger Carey and Liane Carroll at the Palace Bars 1987 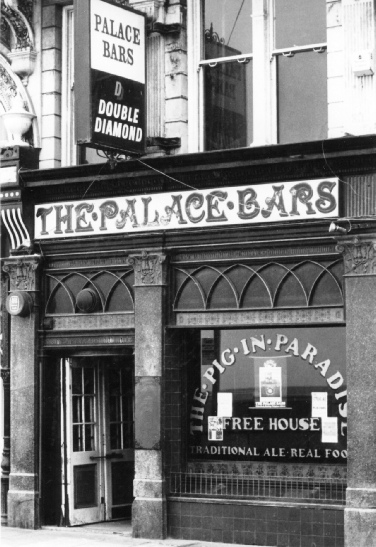 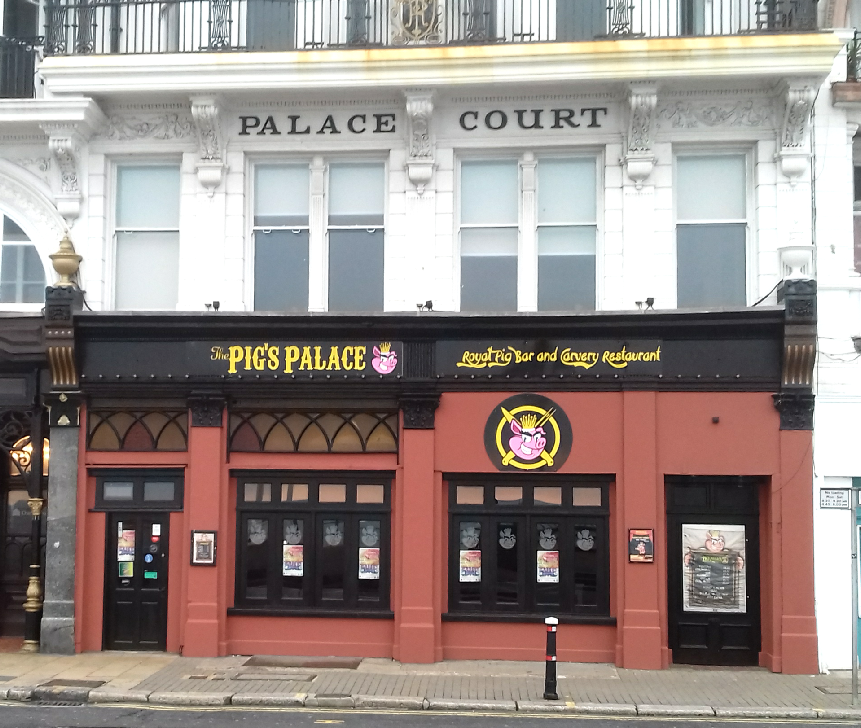