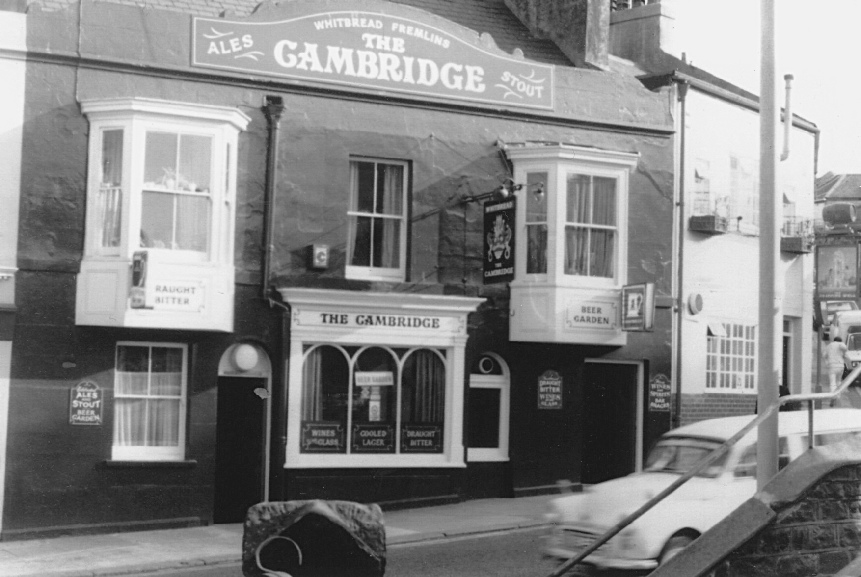 The Union Bar, formerly the Carpenter’s Arms, is listed in the street directories for 1845 and 1862 as the Carpenters Arms and by 1884 it was known as the Cambridge Hotel.

A lot of its history is centred on the upstairs club room, which must be one of the most widely used pub rooms in Hastings. For many years it was the meeting place of printers’ and compositors’ trade union branches, known as chapels. The printers themselves worked next door in the Observer building and at Parsons print works on Claremont. In the mid-19th century, printers also used the room for smoking concerts. A typical printer’s ‘smoker’ had singers and soloists playing the cornet, mandolin and violin and ‘comic recitations’, among other acts.  In 1900 it was the room where 43 local army volunteers received an honorary breakfast, accompanied by speeches from the mayor, before leaving for South Africa and the Boer War. From 1937 the same room was home to the semi-finals and finals of the Annual Observer Darts Tournaments, although the Cambridge darts team itself was unlucky.

From 1907 until 1934 the landlord, James Bargent, was a well-known Hastings’ personality, and before the First World War he was the secretary of the London Cab Company. He was a member of the Buffaloes and received every Buffalo honour, including Provincial Grand Primo for Sussex. He ran the refreshment bars at the Central Cricket Ground and at the bowls tournaments at White Rock.

During the Second World War, the clubroom was used to promote campaigns in support of the war effort. In his book Hastings at War, Nathan Goodwin says that 1940 was the year that ‘Alderman Blackman launched the Hastings Spitfire fund in an attempt to raise £5,000 for a new Hastings Spitfire’. Donations came from all over town including its many pubs. The Cambridge darts team was contributor to the fund and all scores under 10 required a halfpenny in the Spitfire tin. Hastings eventually got its Spitfire, known as the ‘Hastings’, which went to war with a volunteer Polish crew about a year later.

Jim and Di Davidson  took over in 1961 and for the next 20 years the Cambridge was Hastings’ most popular pub. Jim remembers: “At one time the brewery lorries from Maidstone carried enough beer for four Hastings’ pubs. At the height of our popularity we had a lorry load of beer to ourselves. Many different people used the pub; all of the Hastings trade union branches met in the upstairs room. These included  ASLEF  (the train drivers’ union), railwaymen, taxi drivers and others. The printers’ chapels had always met there.” It was a meeting place for Hastings Trades Council from at least the 1950s to the 1970s. Jim continued: “Numerous clubs and societies also met upstairs, including the Cage Birds Society and the Hastings Hill Walkers. In the 1960s when traditional Latin mass in the Catholic Church was banned by Rome, the local congregation hired the big room and held mass there. At first we didn’t know what they were doing, but they met there for about two years and had a drink afterwards.

“Ed Burra, painter and printmaker, and John Banting, surrealist painter, both with work in the Tate, drank there regularly, as did George Melly. Another customer in the 1970s was Observer editor, Gary Chapman. The Cambridge was one of his favourite pubs. We were having problems with the high rent charged by the brewery at the time and Gary wrote some criticism about the brewers in the paper. The brewers didn’t want negative publicity and ‘encouraged’ us to move, which we did in 1982.”

In the 1960s Peter Skinner was a reporter on the Observer. “One of the regulars”, he reminisces, “was a guy called Frank Rhoden, who ran the Hastings International Chess Congress—one of the biggest in the world. Because of Frank, all the Soviet Grand Masters and people who were legends in the chess world came into the Cambridge during the congress. They dressed up as English parsons in grey flannel trousers, tweed jackets and pipes. They did this because they had a notion of what the middle classes in England were like and they aped it. All these Grand Masters sitting there, looking like country parsons. They wandered down because Frank was the organiser, they came to an English pub and they would play chess with the customers. I played with a number of them.

“Probably because of Frank, there was a thriving chess community. I played chess at lunchtimes with printers or other journalists. Jim  kept the boards. He was a very easy going and likeable guy. The other thing, it was only 250 yards from the Hastings Chess Club, the only club in Britain which had its own building and which opened from 1 pm to 11 pm, every day of the week. Hastings has a great chess tradition and the players would walk down to the Cambridge.  I played with Smyslov and a Dutch player, whose name I can’t remember. All the great players of the 60s would come in and play. Some of them would play everybody in the pub at the same time, without even thinking about it. But they loved the notion of the pub—an English pub. It was an eclectic mix of printers, journalists, artists, chess players and darts players. It really was a socially mixed pub—there was no notion of class, and everybody went into the public bar.”

In the early 1980s the Observer moved and in 1982 longstanding landlord Jim and his wife Di moved to the Railway in St Leonards. The incoming landlord changed the name to Tavern in the Town and created a nostalgic Victorian atmosphere, supposedly reminiscent of the seaside at the turn of the previous century. The downstairs bars became one and various artefacts including a bathing machine; sign boards and a collage of Victorian seaside postcards were installed. 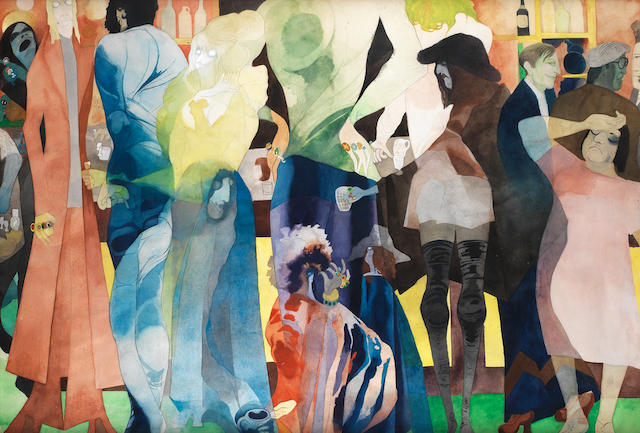 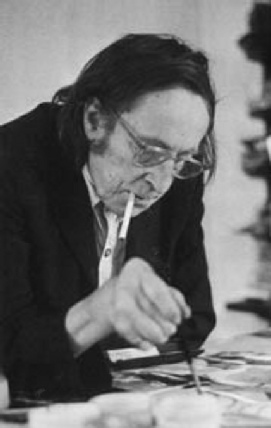 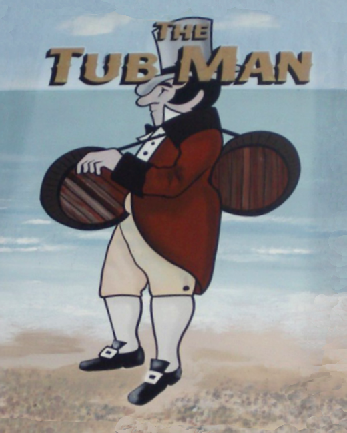 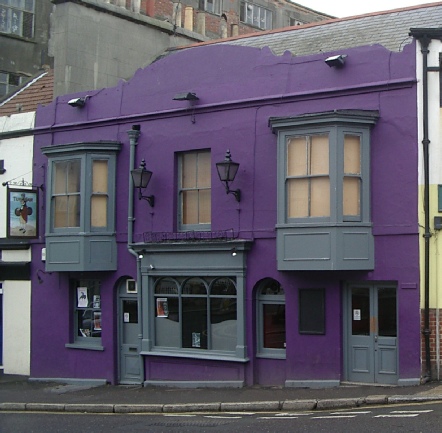 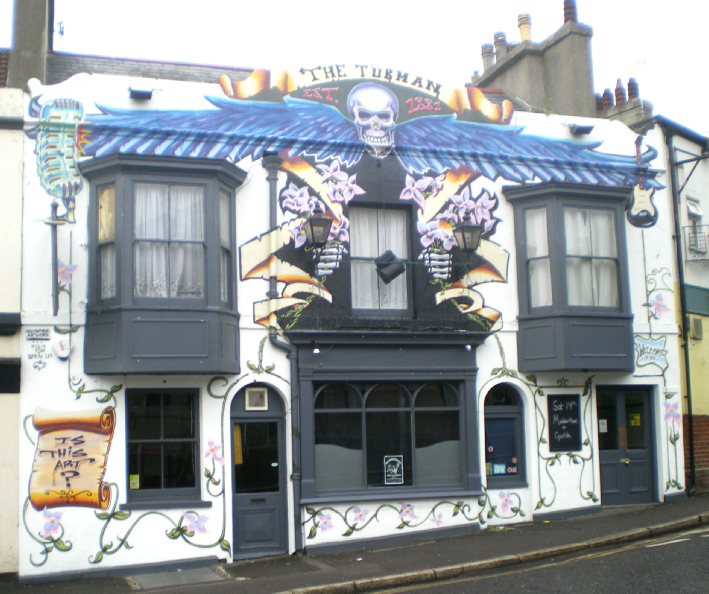 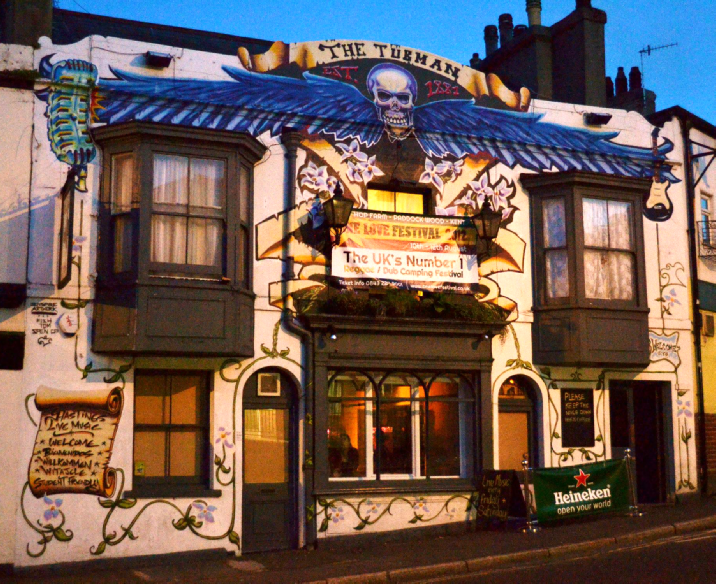 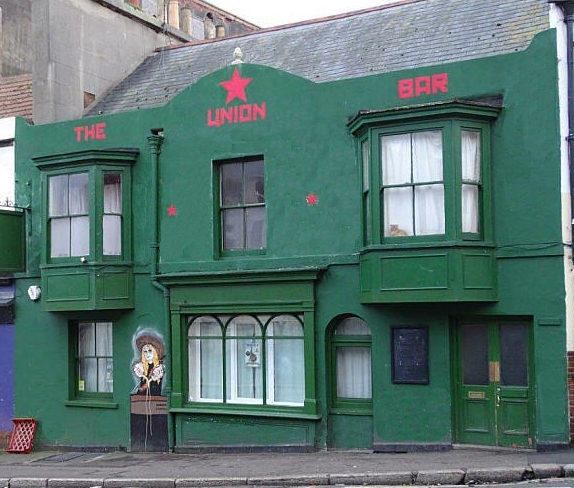 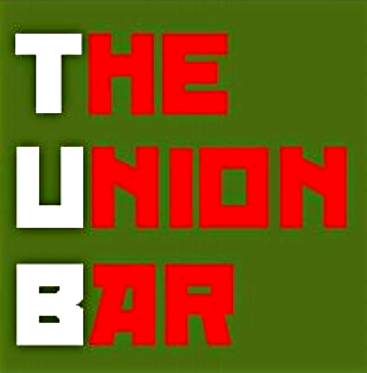 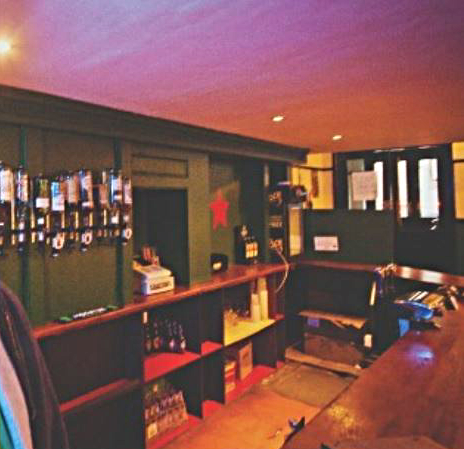 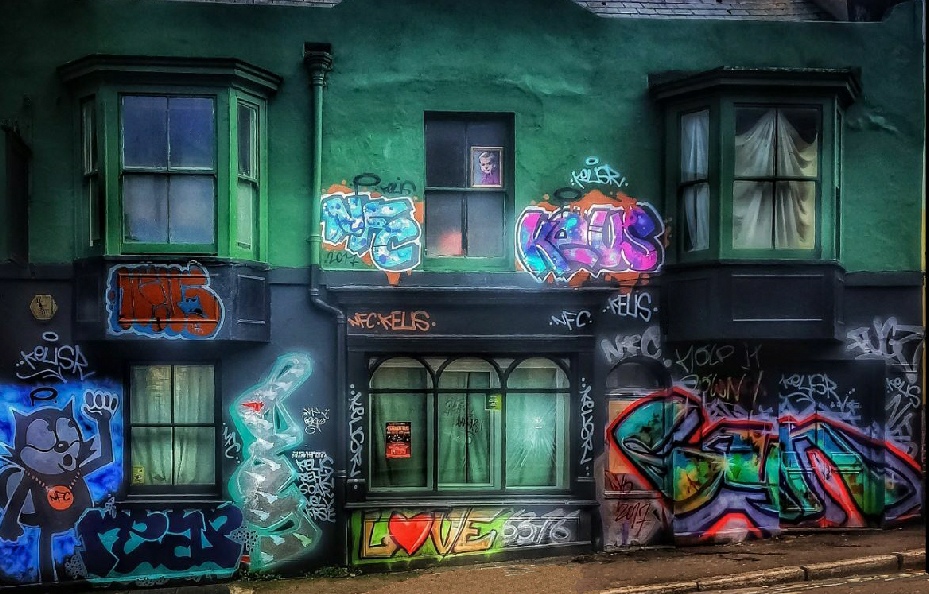 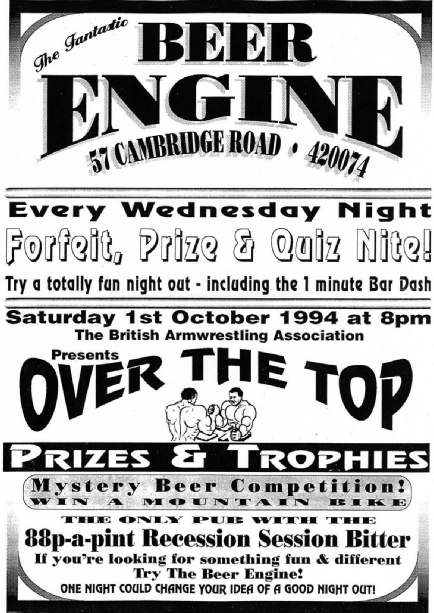 Meanwhile, the Dripping Well next door started life about 1850 as a licensed store run by Elizabeth Collins, who advertised herself as a ‘Baker, Grocer and Beer Retailer’. About 20 years later it was licensed to her son, Joseph Montague Collins, and had acquired the name the Dripping Well after a popular Victorian era natural attraction located in Hastings Country Park.

From 1894 until 1937 the premises were run by Dennis Coppard and shared with Charles Lane, a wholesale confectioner. Dennis Coppard was one of the longest serving landlords in the town with over 43 years’ service.

Although it was policy to close one pub where two were adjacent, both pubs escaped this fate until the closure of the Union Bar. Both pubs were situated on the slope of Cambridge Road, and the Dripping Well is built on two levels with one bar overlooking the other.

The pub is named after a small stream, in a beautiful romantic glen located in Hastings Country Park about three miles from the town centre. In 1853 just after the beer house first opened, the stream was celebrated in a poem by J.P. Douglas:-

Away, away to the Dripping Well!
In the wild and far ravine,
Where towering cliff and shady dell
And spangling moss are seen!
It seems as though I felt the thrall
Of a deep and solemn spell.
As I list the tinkling waters fall,
Of the lonely Dripping Well!

Away, away, from the city’s din,
To that sweet secluded spot,
Where the pang of care, and the lure of sin,
May be alike forgot!
Ah many a bright and happy time
I have roved in that fair dell;
While my heart was sooth’d by the gurgling chime
Of the lonely Dripping Well! 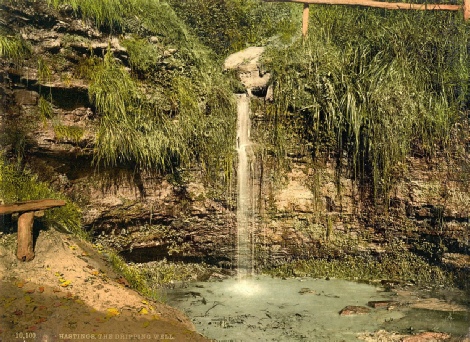 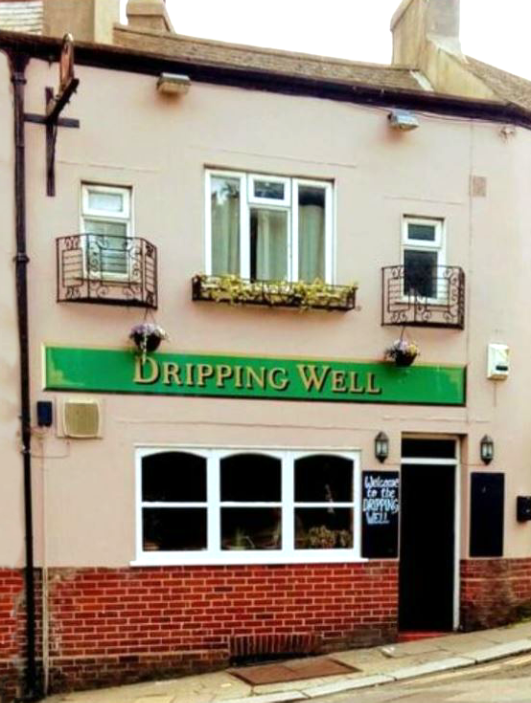 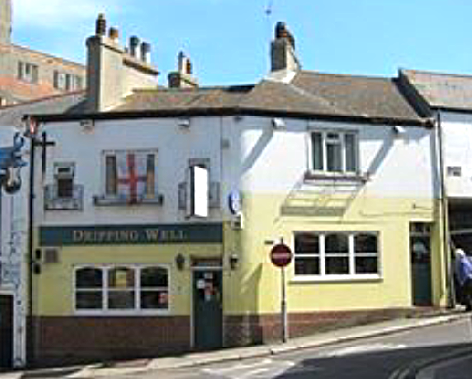 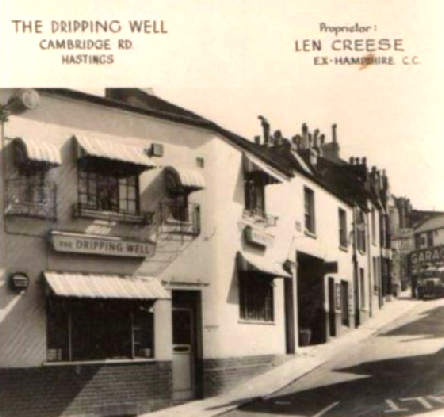 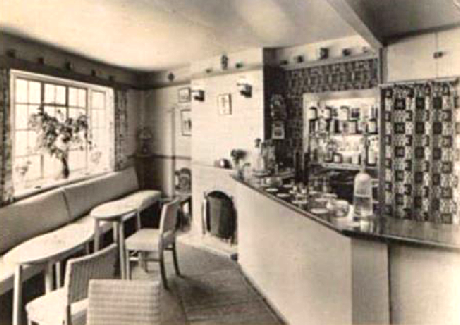