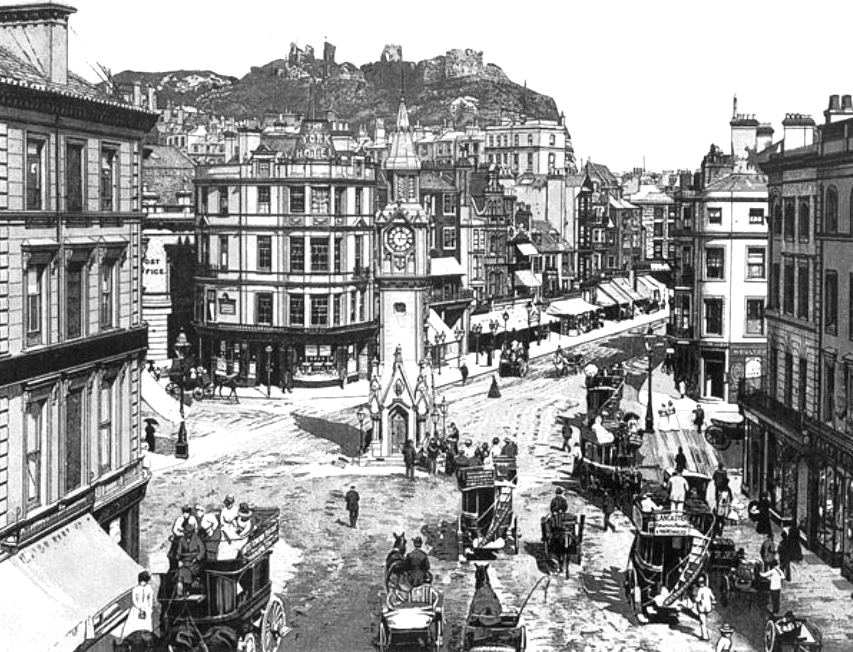 York Hotel, on the corner behind the war memorial 1890

York Buildings, now a shopping centre, was originally a cluster of private lodging houses. These buildings once looked out over the Priory Bridge and the shanties of America Ground before the construction of Robertson Street from 1850. In 1852 Susannah Osborne was granted a licence for a York Tavern and in 1853 Thomas Coussens appeared to have been granted a licence for a second York Tavern opposite. Not surprisingly, the first York Tavern changed its name to the Freemasons in 1854.

The Albert Memorial, erected in 1862 in front of the York, quickly became the most important landmark of Hastings town centre. By 1866 James Hayter was the licensee and the buildings had become commonly known as Hayter’s York Tavern. 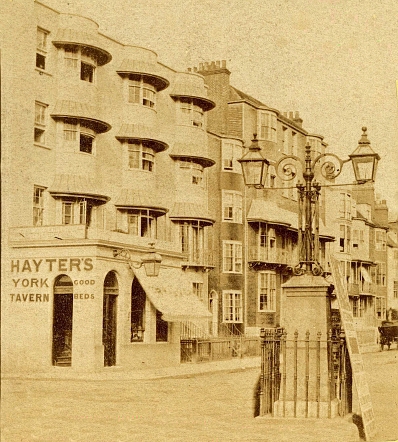 The York Tavern was the pub of the boxing community. One of its more famous customers was Tom Sayers (1826–1865), the Brighton-born, 19th century champion bare-knuckle fighter, who stayed at the York when in Hastings. In 1857 Sayers became heavyweight champion of England (unofficial, since boxing was then illegal) and was the last holder of the title before the introduction of the Queensberry rules in 1867. But it seems he didn’t always pay his bills. 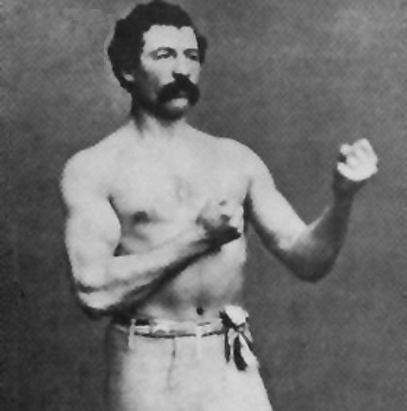 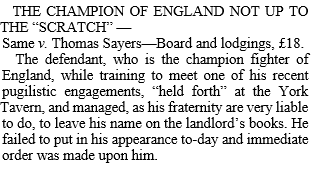 In the 1870s the police became concerned about the numerous fish hawkers causing obstruction outside. Several hawkers were summonsed more than once for allowing the public to gather around their whelk carts at closing time. When a constable asked one to move on he was ‘answered in three or four warm sentences, pungent with bad language’.

A fraudulent business scheme referred to as ‘the Liberal Association and York Hotel case’ in 1878 provoked a local outburst. Controversially, the York was auctioned off on the cheap, to purchasers who knew that Hastings Corporation would have to purchase the property to carry out road improvements. The owners made a large profit at the ratepayers expense. Hayter, a Liberal councillor, probably tipped them off and in 1879 a new York Hotel was erected. 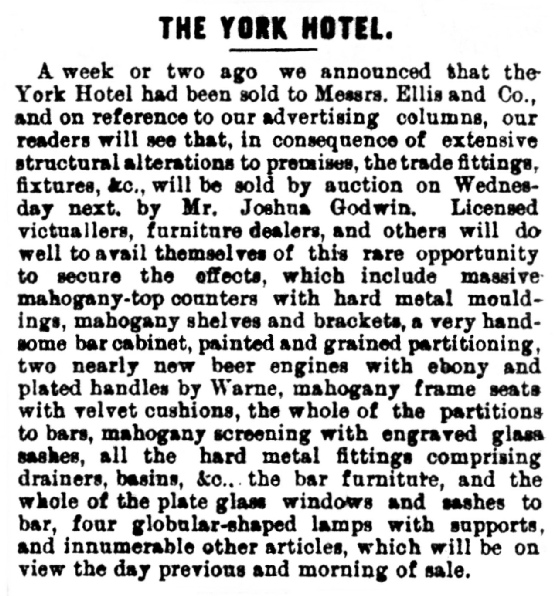 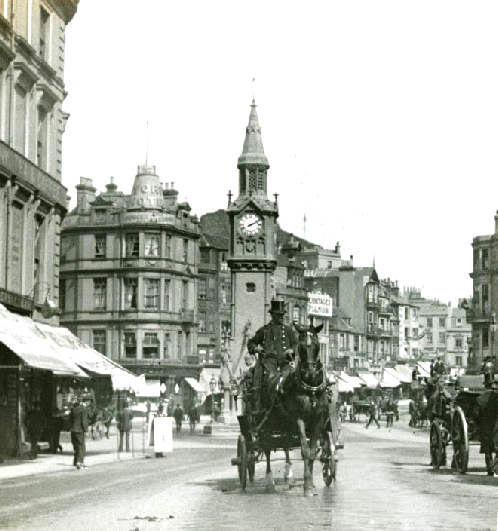 In the 1890s it became known as the York Hotel and London Distillery. The ground floor bars were designed on the lines of a gin palace with fast service from the beer engines and decorated with ornate mirrors and etched glass. In short, a Victorian Wetherspoon’s with cheap and plentiful supplies. On the other hand, the lavishly furnished upstairs lounge was described as looking like a high-class club. ‘A thick Turkey carpet covers the floor and on the walls a rich Japanese paper has been used, surmounted by a hand painted tulip garden frieze....’ The stained glass windows were curtained in gold silk, the bar was walnut and the whole lounge was approached by ‘a flight of marble steps’. The York applied several times to have its off-licence at the rear of the building in York Gardens changed. As an off-licence it could only sell liquors and wines in bottles. The landlord claimed that customers often wanted to taste the wine before buying and had to go round to the bar. The applications were always refused. 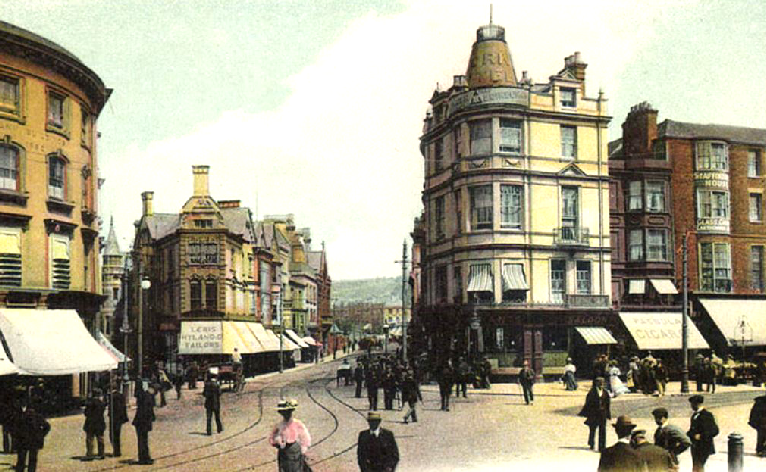 During the First World War, the licensee was charged with allowing soldiers to get drunk. The police claimed that he was not a fit and proper person to run a public house and opposed his licence. They also claimed the York was used ‘by low class women and persons of bad character’ and ‘by some of the worst persons in the town who were in and out all day long’.  A renewed licence was at first refused but then allowed, although the magistrates noted a complaint by the local commanding officer that large numbers of the Royal Field Artillery were being arrested for drunkenness in the town centre. The evening street scene outside the York was described as a drunken ‘khaki crowd’. Soon after, a new manager was appointed.

The York was also popular with the military in the Second World War. Retired Police Inspector, the late Charles Banks recalled that “Hastings police were once called to the York Hotel. There, a G.I. got into a quarrel with two English soldiers and the American had suddenly drawn an automatic pistol from his tunic and fired two rounds into the pub ceiling. The two English privates quickly disarmed the G.I. ... and he was detained in a police cell. The G.I. was charged with ‘carrying a concealed weapon’; recklessly firing two rounds into the York Bar and disorderly conduct. After a full hearing he was sentenced to 12 months imprisonment.” 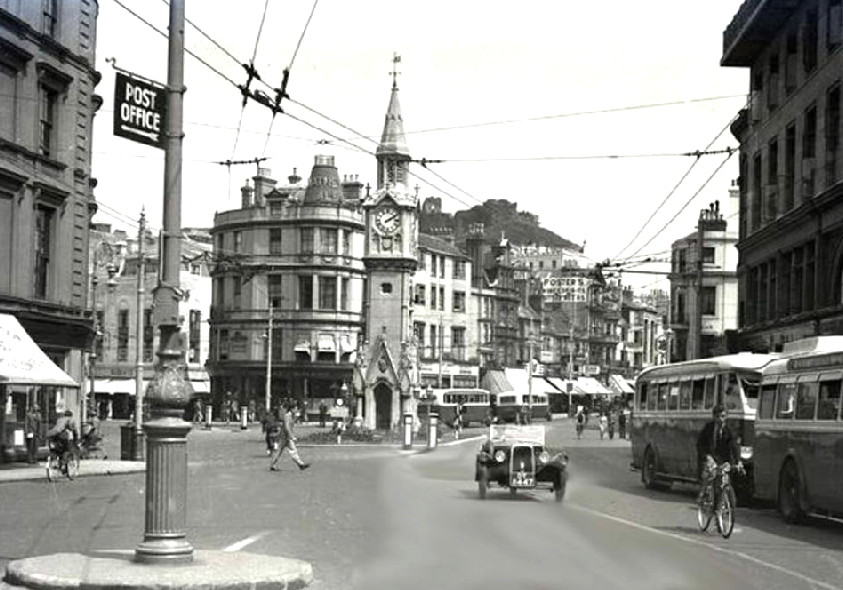 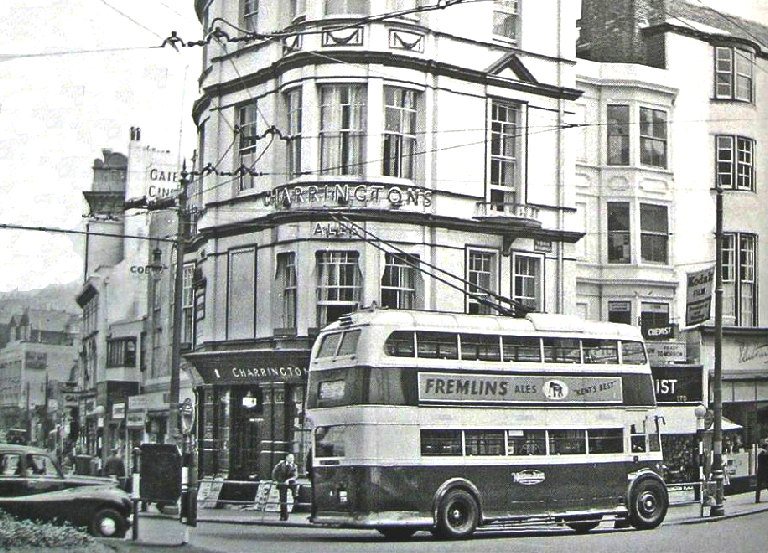 The upstairs lounge of the York was still popular in the 1950s and early 1960s, especially with courting couples.

In 1964 the lease on the York Tavern came to an end and the licence was transferred to Falaise Hall in White Rock Gardens. The two upper floors were removed and the lower floors became Hastings Information Centre. It is now Costa Coffee.

The Albert Memorial clock tower synonymous with the York Hotel as the centre of Hastings since 1862, was demolished after a fire in 1973. 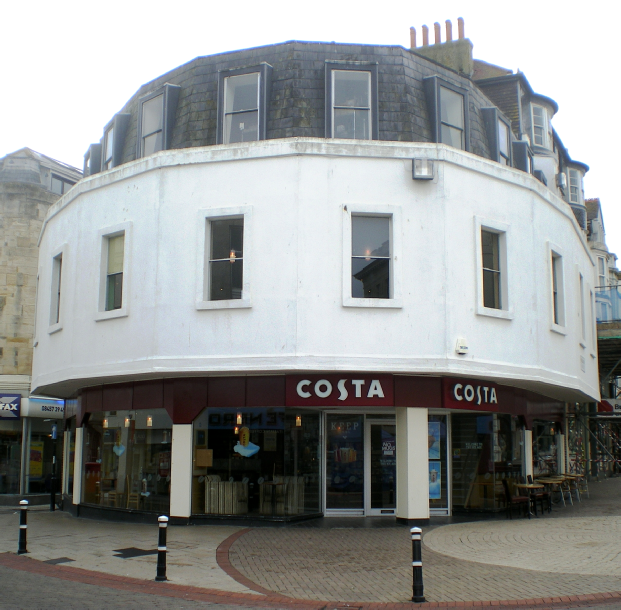 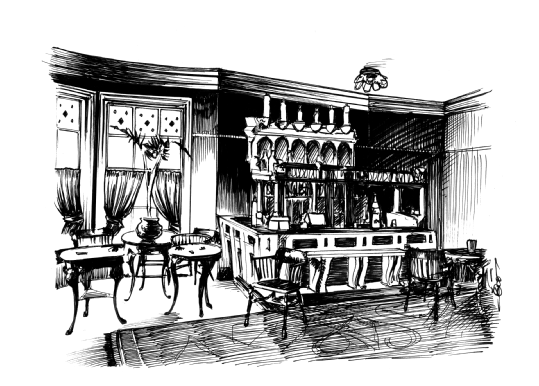 The upstairs lounge of the York Hotel and London Distillery 1899,
drawing by James Gray