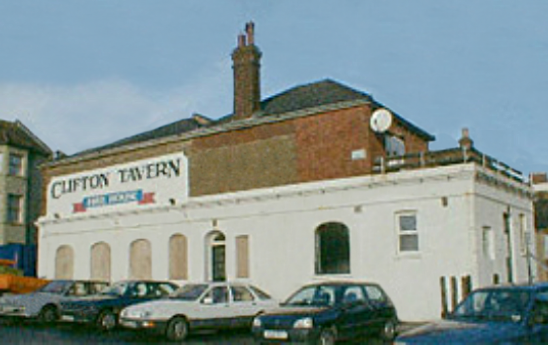 This pub, on the north side of Warrior Square railway station, was granted a spirit licence in 1870, but was a beer house before then. The first landlord was James Brockhill who stayed until 1888. During his time he encouraged several organisations to use the pub on a regular basis. In 1895, 80 members of the newly organised Hastings and St Leonards Branch of the Postmen’s Federation held their first annual general meeting here. They decided issues such as a minimum wage for postmen of £2 per week, pensions and ‘gratuity insurance’.

The St Leonards branch of the Buffaloes, which had 73 members, also held weekly meetings and before the First World War the Clifton had its own Benefit Society, which organised ‘Smoking Concerts’ and musical programmes. One such concert in 1913 entertained with renditions of ‘Drake Goes West’ [encore], ‘My Sporting Guide’, Ragtime piano and comic recitations by ‘The Three Freds’. On another evening it raised £14 for the local hospital. Using the historic retail price index, £14 in 1913 is worth £958 today!

In 1916, during the First World War, the potman, Alfred Winder, aged forty, was called up into the army. He appealed to the Hastings Military Tribunal, on the basis that his aged mother relied on the 14s [70p] a week he gave her. Their situation was ignored, exemption was refused and he was sent off to fight in France. It is not known whether he returned.

In the 1920s, the landlord applied to extend closing time by half an hour to 10.30 pm, during July, August and September. Several customers, who were members of the St Leonards Allotments Association, worked on their allotments late on summer evenings and looked forward to a pint after heavy digging. They accompanied the  landlord to the magistrates court to lend their support. However, there was no change and the 10 pm closing time stayed. Although members of the SLAA socialised in the Clifton, they possibly held association meetings here as well. The SLAA still exists and has a long local history.

From 1907 until 1938, the Clifton’s longstanding landlord was E.C. Bannister, who was awarded a silver tea set on his retirement. Some customers, who used the pub when he took over, were still there when he retired. One said: ‘I always thought “Dr” Bannister’s medicine kept me young and healthy’. Another customer had been drinking at the pub since 1886 and attended the landlord’s wedding.

During the Second World War, customers not called up were still active on their allotments ‘digging for victory’. In the evenings they played darts and won the Observer Annual Darts Tournament three years running, from 1942 to 1944, beating all other Hastings pub teams. The prizes were National Savings Certificates. The chief constable opposed an application for a music licence in 1942. ‘I’m not having this class of public house turned into a community singing hall’, he said.

In 1945 they were still digging for victory and supported the Hastings Food Production Exhibition attended by 15,000 people at White Rock. The main exhibit was entitled Dawn of Peace, in a design of red and yellow tomatoes, against a background of potatoes, with the words: ‘1939-1945 Victory. Thank you’, in runner beans. All were grown from seeds donated by America.

Customers were still winning at darts in 1970, when the Clifton Ladies’ Team beat all other ladies’ teams in the Watney’s Games League. Around 500 people gathered in the ballroom on Hastings pier to watch them receive their trophy.

During the entire lifetime of the Clifton, there does not seem to have been any recorded incident of drunkenness, bad behaviour or serving out of hours. Literally, pub life on the other side of the railway track seemed to be a long way from that of some other pubs. But all good things must come to an end and in the 1980s the Clifton was let down by the Phoenix Brewery, and licensees Wally and Enid Beerling threatened to sue them for poor maintenance.

In 1986, one regular, Winnie Suckling, who had been drinking there since the 1920s, was presented with a set of glass goblets and guaranteed a free drink every day for the rest of her life. The pub closed in the 1990s and although it didn’t become a ‘community singing hall’ it did become a community centre! Its name and sign, an impression of the Clifton suspension bridge in Bristol, were painted directly onto the front wall and are still visible. 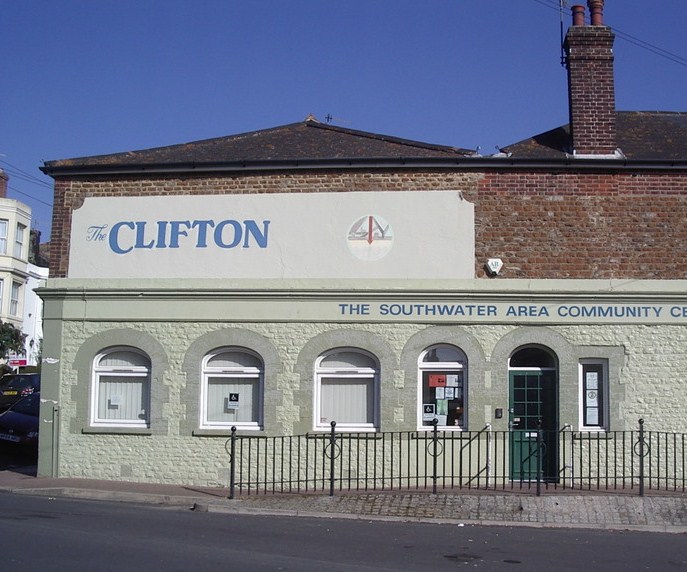