In Victorian times the Old Town of Hastings was a very poor area hosting a large number of pubs and beer houses. Several beer houses provided cheap accommodation for tramping tradesmen, fishermen from outside Hastings, hawkers, itinerants, and others, including a lot of women. They were designated as ‘Common Lodging Houses’, and some of them were licensed to sell beer.  As licensed premises, they had a bar attached and sometimes two. Between 1830 and 1869 anyone who paid rates could sell beer by purchasing a licence for two guineas from the Excise, bypassing the local magistrates. In the main, these licensed premises did not have a ‘pub name’ and were simply known by the licensee’s name. The Merry Christmas was one beer house with a name and was located in All Saints Street between 1848–1852, when the landlord was Edward Paris.

The Merry Christmas is listed in a document called ‘Returns Under the Common Lodging Houses Act 1851’. It had 12 beds to let, all lodgers sleeping two to a bed. In 1848 a tramping carpenter, called Thomas Wright, was charged with stealing a blanket from the Merry Christmas, and Eliza Paris, wife of the landlord, was a key witness. The prisoner was found guilty and sentenced to seven months in the Lewes House of Correction, which included 14 days in solitary.

This document was published in 1852 so we know that the Merry Christmas existed for at least four years. Its publication was a legal requirement under the 1848 Public Health Act.  Hastings, along with other towns, was obliged to carry out a survey of the town’s drainage and sewers because of concerns about a national outbreak of cholera in 1849. Drinking water in the Old Town was of very poor quality. Its main source, the Bourne stream, was filthy, which was a major reason why several premises sold beer and also why some were small brewers.

The survey of Hastings drainage and sewerage was carried out by E. Cresy, a government inspector, and published in 1850. He described the Old Town as a festering slum where residents suffered the most decrepit conditions. Overflowing cess pools were discharged onto the beach and only a third of all housing had running water— but even this was contaminated by sewerage. However, you were lucky to be connected to the inadequate water supply and drainage system, when many hundreds, if not thousands, went without toilet facilities, drainage or running water.

The poor condition of the Merry Christmas was brought to Cresy’s attention by the police who visited the premises in search of a stolen dog.

ELIZA PARIS, whose husband keeps the “Merry Christmas” lodging-house, in All Saints-street, and EDWARD WHITE, one of her lodgers, appeared in the hands of the borough police in the course of the afternoon, on a charge of assaulting police-constable Jeffery (E.S.C.) in the execution of his duty.
It appeared that Colonel Elliott, residing at Ore, had lately missed a puppy, and information having been received that the dog was at the “Merry Christmas,” Jeffery went to the house in the course of this day (Monday), in company with a man-servant belonging to Colonel Elliott’s establishment. The dog was found at Mrs. Paris’s, and the servant endeavoured to carry it off, but Mrs. Paris refused to let it go, and caught hold of the animal. A struggle ensued, which threatened to issue fatally to the unfortunate animal, on perceiving which the servant desisted. The constable and the servant then went to procure a search warrant, which was speedily obtained, but the dog was not to be found on their return. Inspector Campbell accompanied them on this second visit; and while they were searching the premises, Jeffery was first assaulted by the male prisoner and then by Mrs. Paris, who were then taken into custody, and speedily made their appearance before the magistrates as stated above.
The bench fined the male prisoner 20s., in default of payment to go to prison for 14 days. They ordered Mrs. Paris to be remanded, and offered to set her at liberty if she would promise to appear before them at 10 o’clock the next morning, but her irritability was so excessive that she scouted any such obligation, and declared she would go to prison, whither she was accordingly conveyed.
TUESDAY, Nov. 20.—Before the MAYOR and F.W. STAINES, Esq.
ELIZA PARIS, remanded from the previous afternoon, was brought up and discharged—the missing dog which had led to such awkward consequences having been discovered, in consequence of information received from the irascible landlady. The animal was handed over to Colonel Elliott’s servant, and Mrs. Paris proceeded homewards to await a visit from the Sanitary Committee, whose attention was to be drawn to the filthy state of the lodging-house, as discovered by the police in searching after the dog.

Cresy’s report mentions the Merry Christmas, the Cinque Ports Arms, the Crown Inn yard and several other licensed premises with attached lodging houses by name. At the Merry Christmas, Cresy reported: ‘Edward Paris makes up 24 beds. Here the privy stands upon the highest level, from whence is a descent of 13 steps to the living room; the floor of the privy is on a level with the one pair window of the house in All Saints Street. The drainage proceeds from one platform [floor] to another, and eventually finds its way into the street.’

In 1849 there were at least 65 deaths from cholera in the Old Town alone, and many more went unregistered. Some other areas of the town were equally as bad. National and local government were forced to make the connection between the unsanitary environment, bad public health and an average life span of only 31 years. This was bad news for Hastings. It was not what the town wanted visitors to know about or experience. As for the Merry Christmas and the other common lodging houses, a major concern was drinking water. Those who were licensed to sell beer were in a much better position than those who weren’t. Beer was obviously a healthier and safer drink and this is why there were numerous beer houses in the Old Town at that time.

The 1851 Census confirms the location of the Merry Christmas in All Saints Street and lists a total of 16 people in residence on census night including: Edward Paris, 39, licensee and bricklayer; Robert Paris, 10, son;  Claire Paris, 6, daughter; Thomas Paris, 4, son. (Eliza Paris, wife of the licensee and their son Edward Paris, the Younger, were not listed.) The 12 other people listed were six couples all recorded as lodgers who had tramped from various parts of the country: Hampshire, Kent, Wales, Scotland and Loughton, Essex. The Merry Christmas is not listed in the 1861 Census by which time there seems to have been a change of use, but the copy is blurred.

It is not known if the present house is the same building from that time.  All Saints Street has possibly been renumbered and in any case many properties have been ‘tudorised’ in the style of Mock Tudor which has totally changed their original design. 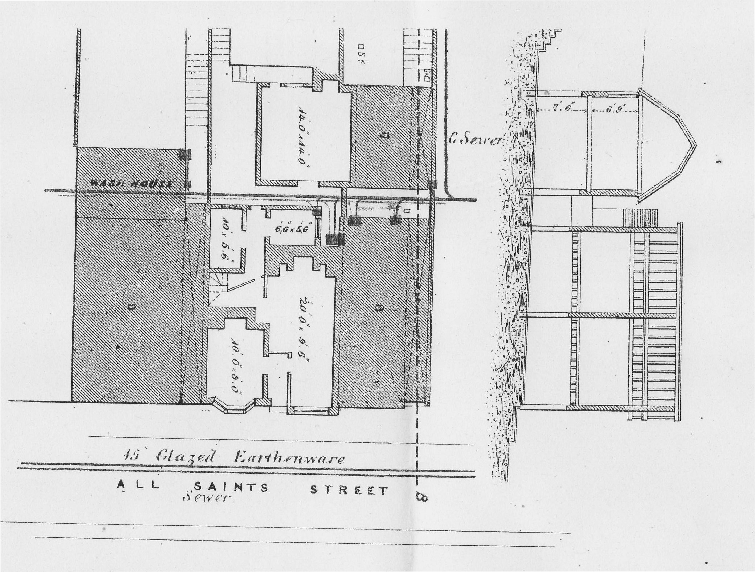 A plan of the Merry Christmas

All Saints Street before the First World War 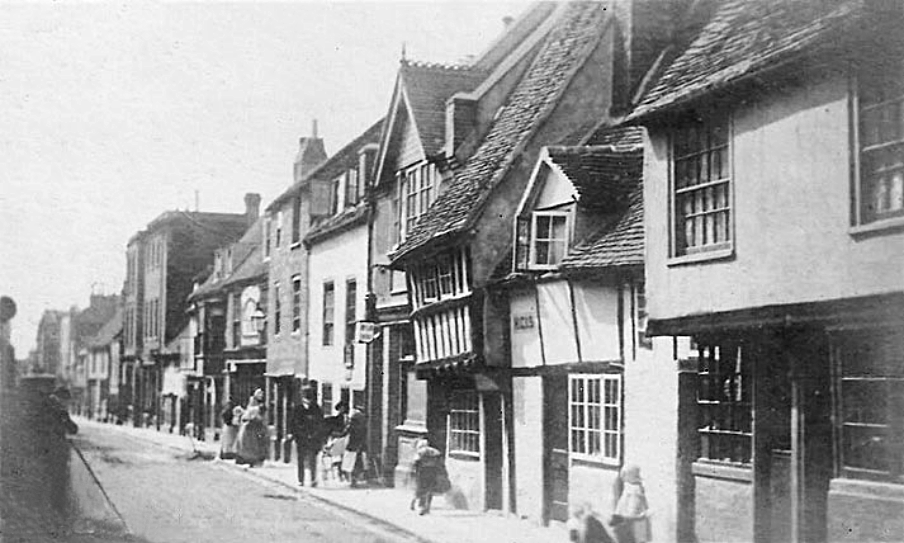