After the Saxon Hotel, on the corner of London Road and Grand Parade, was licensed in 1833, licences were granted to several other St Leonards public houses, including the Old England, which opened in about 1840. However, the coming of the railway and the opening of Gensing Station (now Warrior Square Station) in 1851 meant the original building, barely 10 years old, had to be pulled down as it was blocking the construction of Gensing Station Road, now King’s Road. The Old England was then rebuilt on its present site.

In the 1850s the licensee was William Mantell Eldridge, whose father was licensee at various times of the Swan, the Saxon Hotel and Shades and the St Leonards Arms. He was also proprietor of the St Leonards Brewery, which stood opposite the Old England.

In the early years the Old England Tavern was a lodging house used by employees of the South Eastern Railway Company. One lodger, a luggage porter at the new station, was not the healthiest of men and one morning he started coughing and spitting blood. He was carried from the station to his room at the pub, where he died. The doctor who examined him said that his left lung was badly diseased with a cavity the size of an orange and a burst blood vessel.

In its early years the Old England Tavern opened at 5 am. The 1869 Licensing Act changed opening hours and in 1872 the pub applied to continue opening from 5 am, on the grounds that it was serving 50 local building workers with breakfast. The magistrate pointed out that they didn’t need a licence to serve breakfast but they could not serve alcohol and the early licence was refused. Who paid for the drinks was often decided by gambling with dice, cards and spinning boards, a practice which the police considered illegal, although it was ‘only for beer’.

On an evening in 1894, a drunken ‘colonial type’ came in with a loaded pistol. After a beer he ran off down King’s Road and sat in a doorway. He exclaimed to the policeman: “It would serve the curs right if I shot them”. He had lived 40 years in the British colonies, where he was obliged to carry a gun. A magistrate told him he ‘must not think he was in the wilds of India or Ireland’ when he was in St Leonards and he was instructed to leave the gun at home.

A more famous customer was socialist firebrand and barrow boy Alf Cobb, who in 1907 had a small greengrocer’s shop a few doors away, in Cross Street. In 1910 he was selling strawberries from his barrow, which was parked ‘caterways’ (a Kentish term for diagonal) across the entrance to Cross Street and was summonsed for wilfully obstructing the street with his barrow. In court, he said he went into the pub and ‘called for an order’ after pulling his barrow up London Road. But he was well known to the police as a champion of local barrow boys and when he came out he was ‘nicked’. In court he defended himself vigorously and the case was dismissed.

Over the years the Old England has had a lot of competition. The South Street car park behind the pub was the site of the Prince Alfred, which closed in 1921. The Prince of Wales, at the bottom of Cross Street, is still trading. A third pub, the Bird in Hand, was situated at the other end of South Street. The Warrior’s Gate, Foresters, St Leonards Arms and the Admiral Benbow were on the opposite side of London Road — eight pubs within a few hundred metres of each other.

In 1939 the Old England was extended into the house behind it in Cross Street, forming the building we see today. 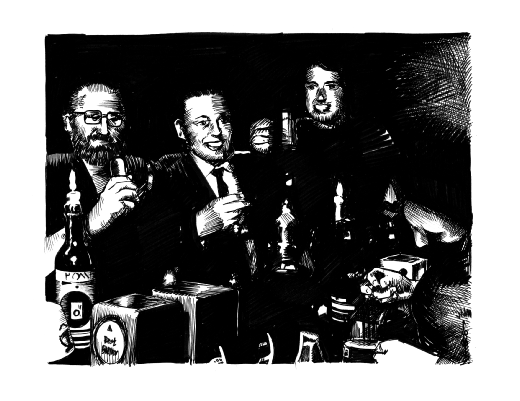 Old England at the time of the Miner’s Strike in 1970, drawing by James Gray 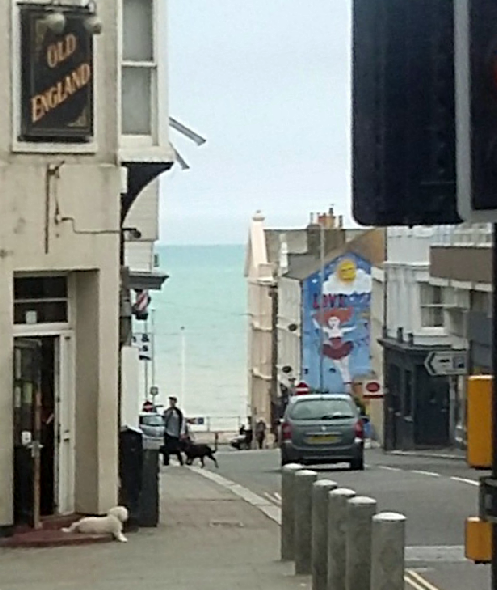 Old England on the left 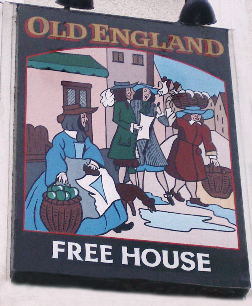 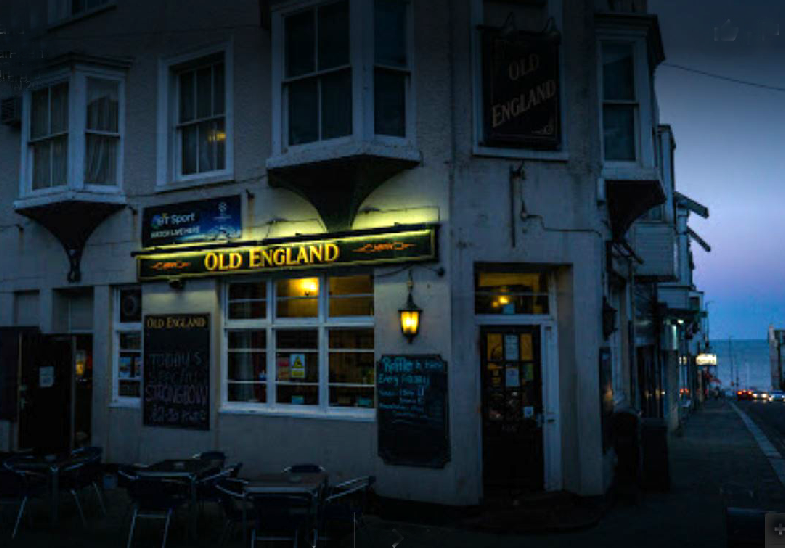