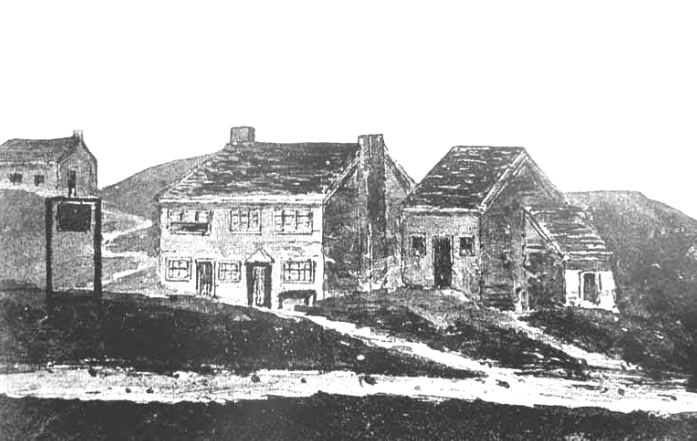 The Bo Peep is linked with the coming of the railways to Hastings, with smuggling and with a well-known nursery rhyme. Formerly the New England Bank it has had four name changes and has been rebuilt at least twice.  It was apparently shown on a map of 1746, and by 1777 it was leased to William Clarke. 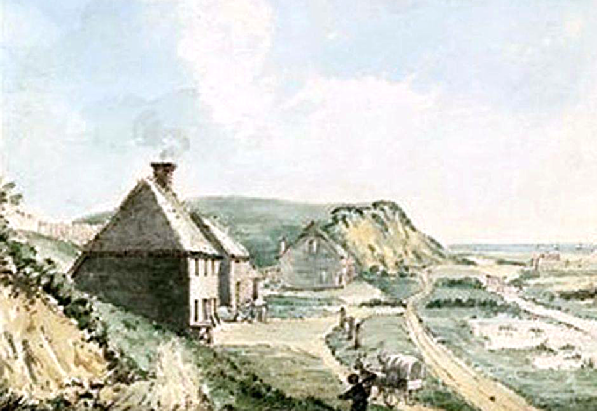 It seems the New England Bank was rebuilt in about 1780 when it  included ‘a kitchen, 2 parlours, 4 bed chambers and 1 garret and stables’. The landlord was then Thomas Everard.

The Sussex Weekly Advertiser reported in 1788 that the Excise Officer at Bo Peep, ‘assisted by members of the 11th regiment of Light Dragoons, seized 48 casks of brandy and geneva loaded on 4 horses’ from local smugglers. Because of the intense smuggling activity the pub was sold again in 1794 and again by auction in 1803.

The Hastings Guide, published in 1797 by James Barry, described the Bo Peep as ‘a public house by the roadside, where company may have an excellent dish of tea and good cream al fresco’. The pub is mentioned again in 1815 as ‘a wretched public house by the roadside’, although this didn’t deter the poet John Keats and the beautiful Isabella Jones from staying there when he visited the south coast in 1817. Keats portrayed Isabella Jones, ‘the lady from Hastings’, in his poem Endymion, a poetic romance depicting a nymph rising naked from the Fishponds, a local beauty spot. The poem is famous for its first line: A thing of beauty is a joy forever. The river Asten which then ran along the course of Grosvenor Gardens also inspired him.

So far her voice flowed on,
like timorous brook.

That lingering along a pebbled coast 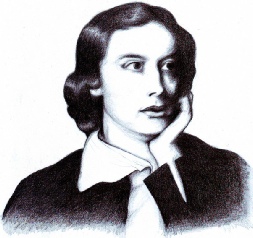 Charles Harper, the smugglers historian recorded that: ‘A determined struggle took place on the evening of January 3rd 1828 at Bo-Peep, then a desolate spot midway between Hastings and Bexhill. It was marked by an evil looking inn to which were attached still more evil looking Pleasure Gardens.

‘On this occasion a lugger came in view offshore and landed a heavy cargo of tubs on the beach. No fewer than 300 rustic labourers,   assembled to guard the landing of the tubs and their loading into carts, and onto horses backs and men’s shoulders. Although challenged there were no fatalities.’

When the railway arrived along the coast from Brighton in 1846, the original pub was demolished to make way for West Marina station.

By all accounts riotous times were had in the old pub. A musician who played there in the 1840s observed that the ‘dancing created abnormal vibration. The visible contraction of the old walls was such as to threaten a general collapse!’

The landlord was compensated by the South Eastern Railway Company and in 1847 he built a new pub, just east of the new station. The new pub was at first called the Railway Terminus Inn and supplied beer to railway passengers waiting for the coach into Hastings. The name reverted back to Bo Peep when the tunnel was dug through the cliffs behind, and the railway line continued into St Leonards. In 1972 when the site of the New England Bank was excavated and developed, old wine bottles, a silver fork and a mineral bottle dated 1808 were found.

In the mid-Victorian era the Bo Peep was a popular venue. Apart from political meetings, balls, quadrilles and parties were held here on a regular basis. It was a meeting place for the St Leonards Vestry, who discussed parish matters and elected the local rate collector.

Not one of whom in flesh now appears

A rate prescribed at that New England Bank

That wayside Inn, near where grazing sheep,

As a ‘railway pub’, coroner’s inquests into accidents on the line took place here. A moment of tragedy came in 1877, with the death of a guard on a train travelling through Bo Peep tunnel. He must have been looking out of the window when a train passing in the opposite direction struck him dead. Nobody saw anything as the tunnel was full of steam. There was a second accident a few years later, when a body and severed head were found on the line by a signalman, who took them to the stables at the rear of the pub. 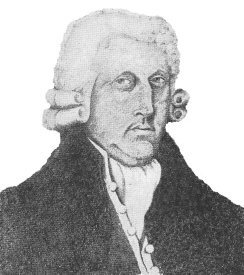 Two years later the lease was held by Thomas Hovenden a well known Hastings publican and brewer, for ‘1½ acres of waste ground with a cottage called New England Bank or Bo-peep’. Hovenden had been brewing locally for at least 30 years, most recently at the Swan and then the Roebuck in High Street. After the French Revolution troops were positioned along the coast in anticipation of an invasion by Napoleon. Hovenden, described as a ‘common brewer’ was not only lessee of the pub but also owner of Bo Peep barracks where 200 soldiers were garrisoned creating a huge demand for his beer.

Academics and others have tried to explain the connection between Bo Peep and smuggling. In fact  the Bo Peep nursery rhyme is a metaphor. Its exact origin is uncertain, but locals claim it as an old St Leonards tale and there is no doubt that the pub was used by smugglers, as shown on one side of the pub sign. The other side shows a shepherdess. The first Bo Peep double sign was unveiled in 1977. 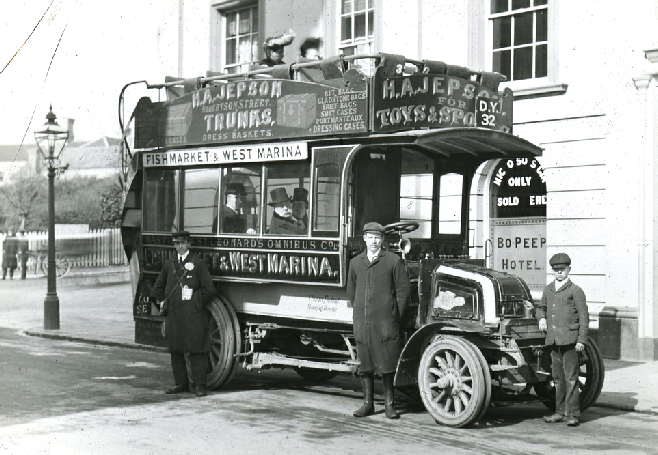 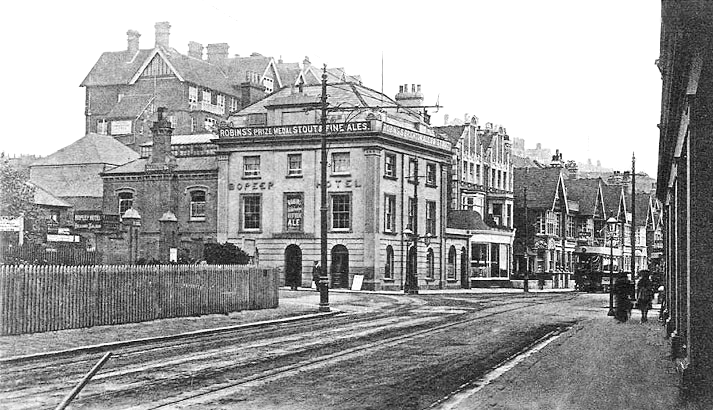 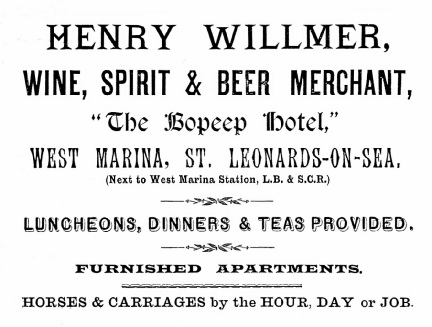 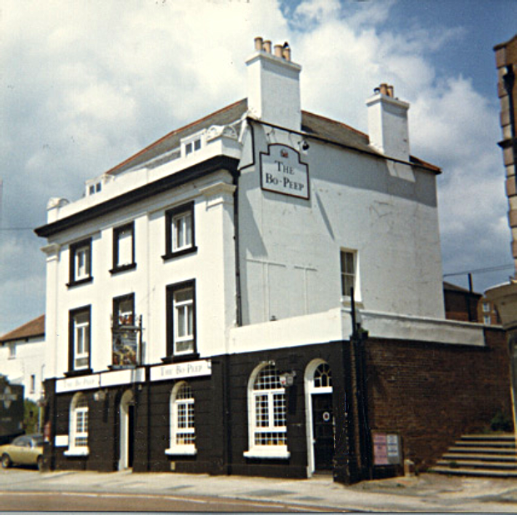 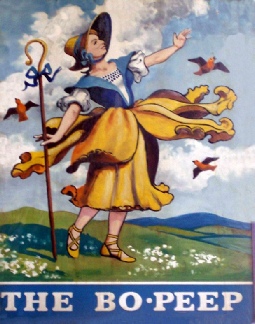 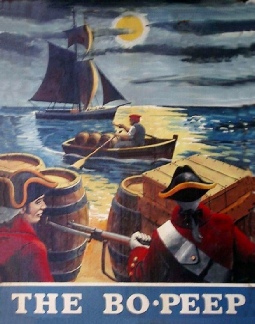 Where sailors, soldiers, smugglers all

Hob nobbed in days of yore; 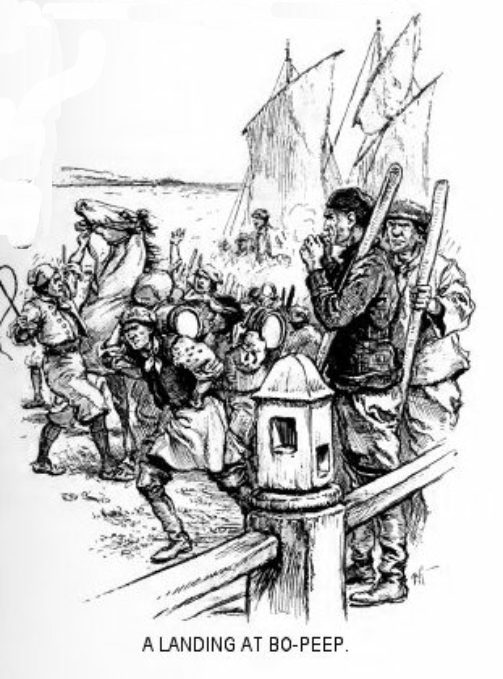