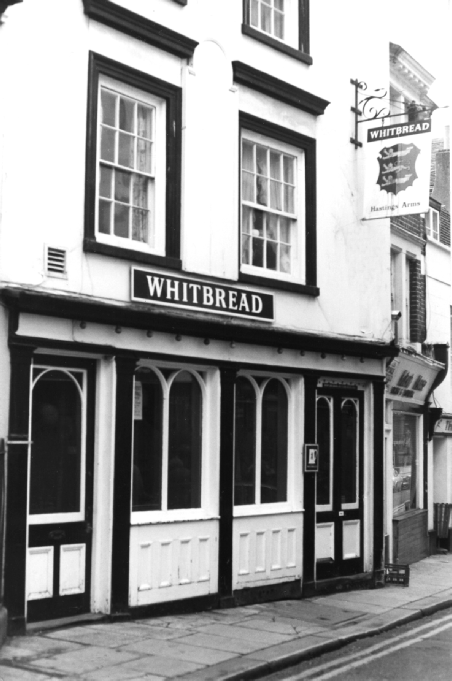 The Hastings Arms public house dates from at least 1794, when it was described as ‘a commercial inn of good reputation’, serving military personnel billeted locally waiting for an invasion by Napoleon.

Twenty years later in 1814, to celebrate the end of the Napoleonic wars, the pub erected a sign described as ‘an illuminated transparency, exhibited to represent the genius of Britain at whose feet lay in abject despair the fallen Corsican hero, with cherubs ascending to proclaim peace’.

From 1827 to 1845, Richard Harman was landlord who at various times also followed the occupations of a tailor, an election agent, a ‘wrecker’ and a promoter of the Hastings Rock Fair. He became well known after a court case in which he sued the local Tory MP, Joseph Planta, for £24 6s 6d [£24.32] expenses which he claimed to have spent in the general election of 1837.

In 1832 Planta had opposed the Reform Bill, which gave the vote to certain groups of men for the first time. Consequently Planta was persona non grata in Hastings and not re-elected. He stood again in 1837 and engaged Harman, ‘well versed in electioneering tactics’ and a reform supporter, as his agent. Planta knew he had little chance without Harman’s support but Harman agreed to act for him only if he agreed not to oppose the Reform Act. Planta agreed but many voters were suspicious. However, corruption was rife and many ‘pinks’ or early liberals, were bribed. Planta gave several Hastings pubs a blank cheque to treat ‘the  pinks’ with free beer and punch. The Horse and Groom, the Hastings Arms, the Sussex Tap, the King’s Head and other pubs across town were involved in this corruption.

In court, evidence was produced to show that several public houses had received cash to treat customers who had the vote. More funds were distributed to tradesmen and artisan voters who were supporters of reform and their wives were treated to tea and sugar. Harman won the case and was granted £15.

‘Wrecking’ was the practice of taking valuables from a shipwreck which had foundered on or near the shore. Usually an unregulated activity of opportunity found in coastal communities. Hastings most notable example was the wreck of the Amsterdam which foundered at Bulverhythe in 1749 and whose cargo was plundered by the locals.  Another ship, also Dutch, was wrecked off Hastings a century later in 1840: 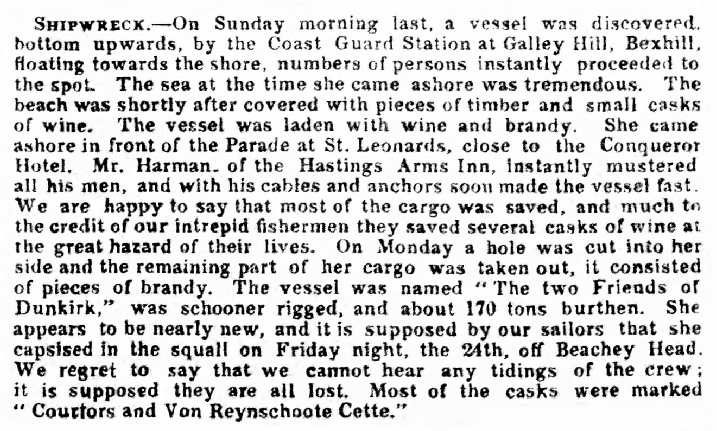 Three years later another court case mentions several local institutions of the time including Hastings Bank, Hastings gaol, the town crier and the Hastings Arms pot boy who was employed to sweep out the bars and to collect up the glasses and pewters:

THOMAS STONESTREET was placed at the bar, charged with stealing a bank-note of the value of £5, on the 4th inst., the same being the property of John Tolhurst.

John Tolhurst deposed that he was an ostler residing in Hastings, and between seven and eight o’clock on the morning of the 4th instant, he was in at Wimble’s eating-house, where he had a £5 note safe in his pocket. It was one of the Hastings Old Bank, and numbered 41297. He afterwards went into the shop of Mr. Thwaites, butcher, in All Saints-street, where he paid some silver. Between ten and eleven o’clock he went into the Hastings Arms Inn and had some drink at the bar, and paid for it with half-a-crown. Did not recollect who served him. He took the silver out of the same pocket as he had the note in. He could not feel distinctly with his hands, in consequence of a paralytic stroke. He first missed the note a little after three in the afternoon, and immediately made enquiries where he had changed money in the morning; but not finding it he went to the bank and stopped payment of it, and had it cried.

John Turner, a newsvender, deposed that on the 4th instant, about the middle of the day, the prisoner came to him for change for a £5 note, stating his mistress had sent him. He (witness) gave the prisoner in change £4 10s. in gold, and 10s. in silver. The note he then produced (which was identified by the prosecutor as the one he had lost) was the same he received from the prisoner. He afterwards heard a note cried, and on making enquiries on the following morning found it was the same as he had changed for the prisoner.

Sarah Harman, wife of Mr. Richard Harman, of the Hastings Arms Inn, deposed that the prisoner had lived in the service of her husband for  about a year and a half as pot-boy, and as such it was his duty to sweep out the bar, which he did in the forenoon of the 4th instant. She did not, on that day, send the prisoner out for change, nor receive any money from him. She heard the note cried, and asked the prisoner if he swept it up among the sand in the bar, as the prosecutor thought he had lost it there, but the prisoner made her no answer. Witness had charged the prisoner, if he found any thing, to bring it either to herself, or Mr. Harman.

The prisoner said he had not been told so by Mrs. Harman, but had been told that whatever he found belonged to the sweeper.

Mrs. Harman replied that she had given such instructions to the prisoner, who had brought her several articles which had been left by the customers, such as snuff boxes, pocket handkerchiefs, &c. She was present when her husband searched the prisoner’s box, in which he found a small box, which contained money, and which was handed over to Mr. Campbell, the police inspector.

John Campbell deposed that he apprehended the prisoner on the 5th inst., he received a small box from Mr. Harman, containing nearly £2; the box produced was the same.

Several witnesses then came forward, and gave the prisoner a good previous character, among whom was Mr. Harman, who stated that he believed the prisoner had always been an honest lad up to that time.

The Recorder briefly summed up, and the jury returned a verdict of guilty.

Sentenced to ten days’ solitary confinement in Hastings gaol, and to be once well whipped.

In the 1850s the rear of the pub was known as the Hastings Arms Shades, where it was socially acceptable for customers to snatch some sleep in the small back bar. Fishermen for example, would call in after a  trip, take some beer and have a nap. In 1851, James Noakes, a ‘higgler’ (hawker), is recorded sleeping with his head on his lap. Similar occurrences are also recorded in the Queen Adelaide (three doors away) and in the Cutter.

One evening during the First World War, five Canadian soldiers in the same bar were drinking Canadian Red Seal Whisky. Although the landlord claimed they couldn’t possibly be drunk on the amount he had sold them, they nevertheless appeared to be. In court they claimed they had been doped and that their drinks had been spiked with ‘snow’, otherwise cocaine, which must have been one of the first drug cases in the town. The chief constable claimed ‘the whole Hastings police force were trained in the use of cocaine’ and that the soldiers had perjured themselves. Consequently the landlord was fined £5 for permitting drunkenness.

In 1980 the pub was featured in the Flook strip cartoon by Hastings resident and jazz clarinetist Wally Fawkes, along with other Hastings landmarks such as the pier.

The pub sign depicts the town coat of arms, which is similar but different from, the arms of the Cinque Ports towns in one important detail. The Cinque Ports of Hastings, Hythe, Romney, Dover and Sandwich have had their own coat of arms for many hundreds of years. Early seals of 1194–1305 show that the design includes three lions ‘passant guardant’ (full face), with one paw raised, each joined to a ship’s hull.

The Hastings Arms differ in that they have only two lions joined to ships hulls. The third lion is complete which denotes Hastings as the chief Cinque Port.

This is further complicated by a second public house also called the Hastings Arms, in Gillingham, Kent. The town of Gillingham was at one time under the control of the Cinque Ports and this (second) Hastings Arms was licensed by the Hastings magistrates until 1949 when it reverted to the Kent authorities. 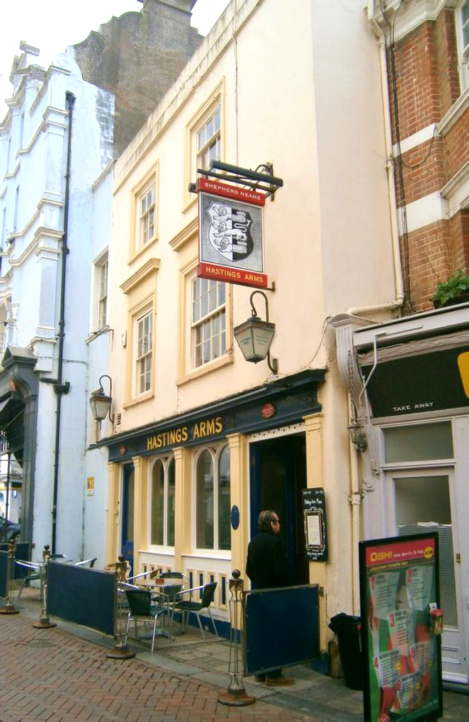 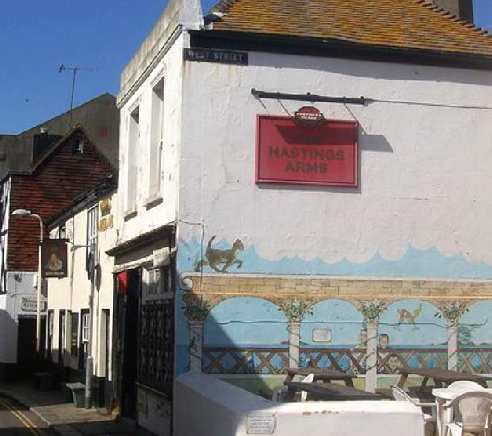 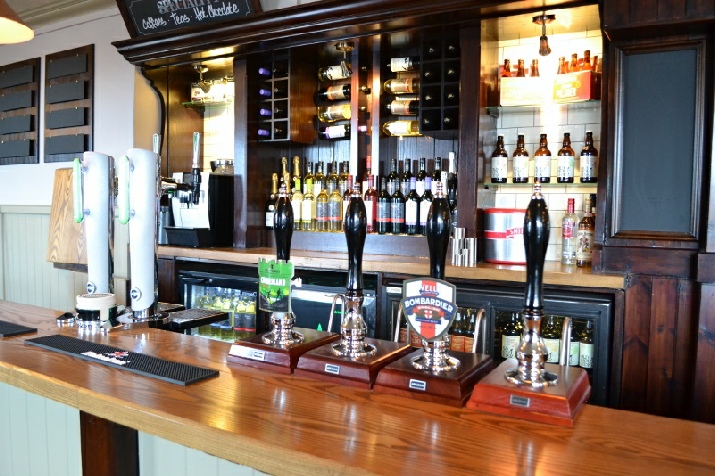 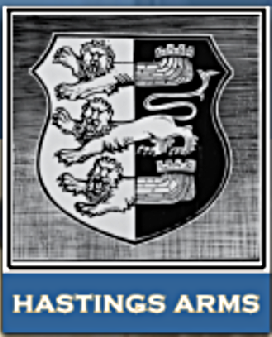 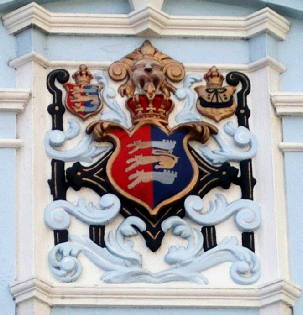 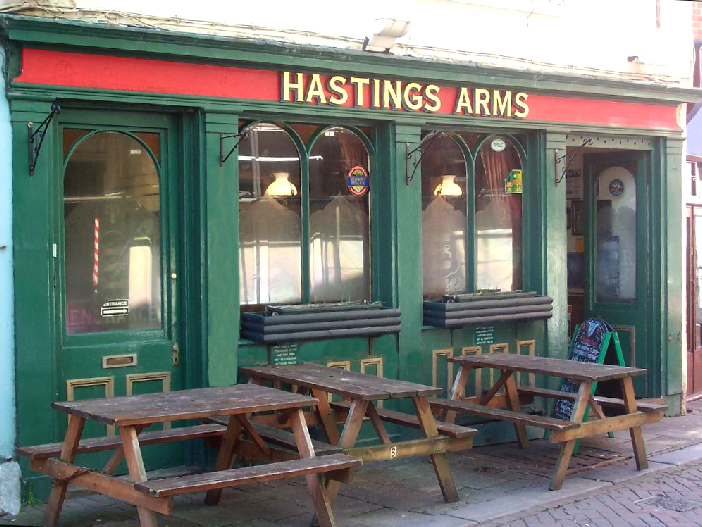 In 1961 old hiding places for contraband spirits were discovered  beneath two windowsills of a bedroom on the first floor. Both windowsills contained three barrels each three feet deep and all were connected to the bar by metal pipes. Each barrel was capable of holding eight gallons [36 litres] and was estimated to be 200 years old. The first recorded licensee was a Mrs Sargent, a widow, in 1794. However there is an account of smugglers adjourning to Pip Sargent’s after running a cargo which suggests the house may have been in existence before that date. 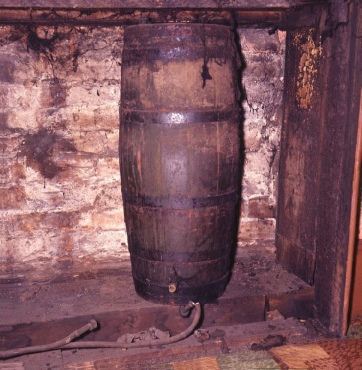 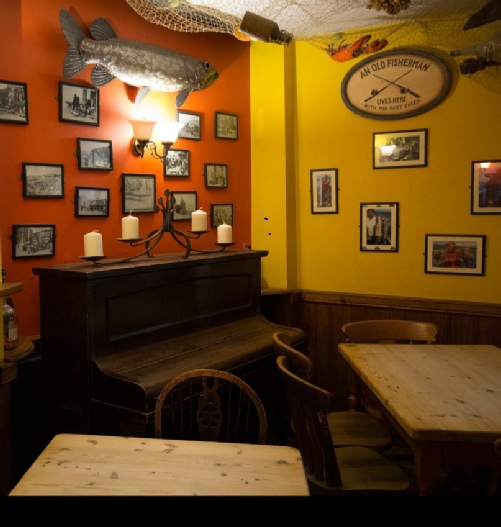 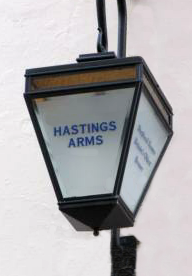 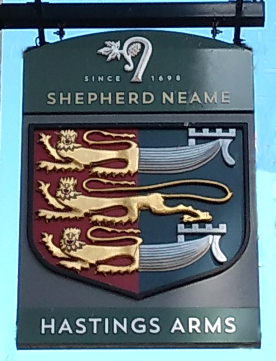