Hole in the Wall and Kicking Donkey 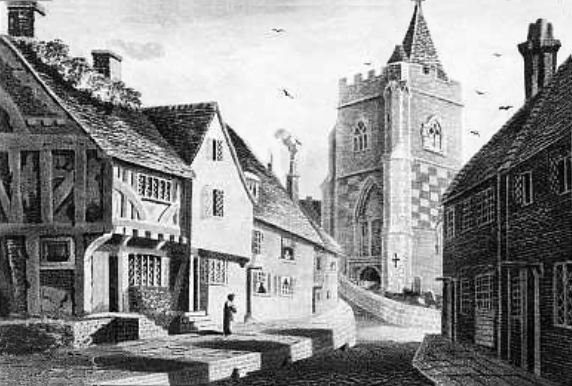 The Hole in the Wall and its sister pub the Kicking Donkey were located opposite each other in Hill Street. The ʼOle in the Wall started selling beer in 1858, when it was a grocery shop with an on licence. The first landlord was John Heathfield, who  gradually transformed the business into a simple beerhouse, a status it kept until 1952. 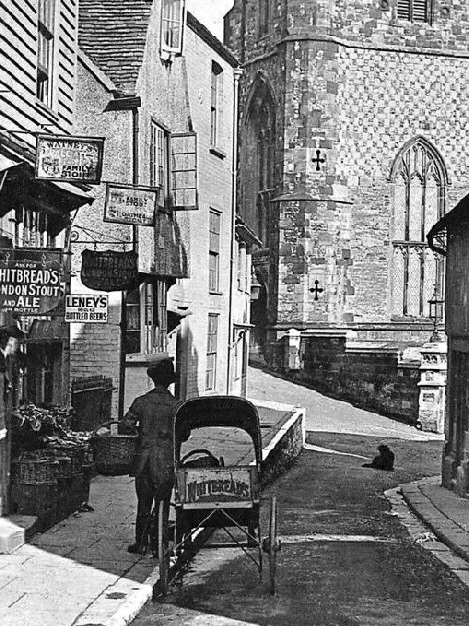 In 1926 magistrates considered closing both pubs on the grounds of redundancy, which was a contradiction, as the police admitted there were more customers in the ʼOle in the Wall when they visited than in any other pub in the Old Town. The police described the pub as ‘cramped and unsuitable’. They objected to the poor lighting of the bar, and to a small passage alongside which led to alleys and small cottages to the rear. The brewers purchased the cottage next door for enlargement of the premises, but in the same year the building suffered a severe fire. After renewal a more modern, larger pub appeared.

A popular landlord was William Smith who arrived in Hastings in 1912. From 1918 to 1931 he worked on the railways and then in 1931 he became licensee of the ʼOle in the Wall, which was described at the time as having a ‘dark atmosphere’. It seems the enlargement had not improved the lighting. Nevertheless it was obviously a good business, selling 400 barrels a year and producing £300 annual profits. Smith died in 1937, just before the pub found brief fame by reaching the final in the Observer Darts Tournament in 1938.

Many supporters accompanied the darts team to the Cambridge clubroom to watch the semi-final between the ʼOle in the Wall and the Victoria, Hollington and again the following week for the final with the Lord Nelson in the Market Hall, George Street. Admission to the final was by ticket only and by all accounts this was a major event with ‘yells of jubilation and groans of disappointment from an excited crowd of 400 spectators’. The ʼOle in the Wall team was only just beaten, even though three of its players were under 20 and were not so experienced.

Fifty-four pubs entered the tournament with 110 teams and 1,000 players but both the finalists were from the Old Town, which suggested they ‘had the best players’ [cheers and boos]. The  team  had  obviously much  improved  since 1935  when they entered the Watney’s Darts Competition with 14 other pubs, but were knocked out early in the competition. 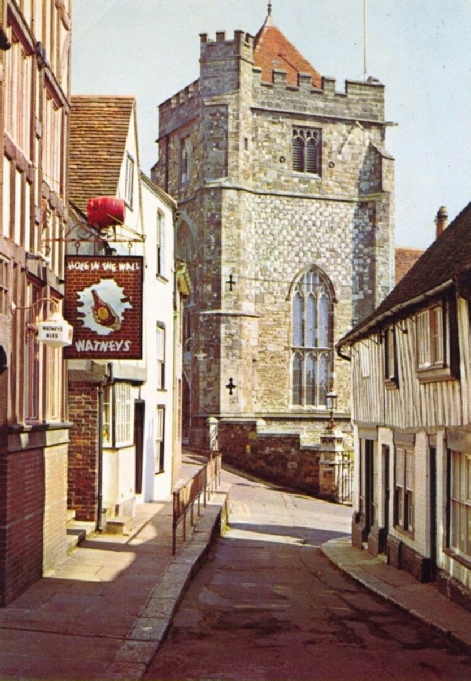 Two regulars in 1944 were Bert Thomas and Charlie Thomset, who were both posted abroad with the Hastings Company of the Royal Sussex Regiment. Early that year Bert had the bad luck to lose his left foot to a German mine and was shipped home. “Job for you laddy”, he said to Charlie on leaving, “find that foot, pickle it and fetch it home”.

Some months later Charlie arrived home on leave and found Bert in the ʼOle in the Wall, in position at the head of the bar. “Where’s my foot?” he said and Charlie had to tell him he didn’t have it. “That’s it, bloody typical. Give you a simple job and you let me down”. “Sorry Bert”, said Charlie, “but you can’t get the vinegar, y’know”.

In 1891 the Kicking Donkey was rebuilt with an additional storey. From 1894 it was known as the Seagull, a most suitable name for a Hastings pub, before reverting back to the Kicking Donkey in 1899. In 1903 the licensing magistrate described the Kicking Donkey as a general shop with a beer engine and a back parlour with rabbits, eggs and sausages for sale. In 1923 it changed its status from a simple beerhouse to a fully licensed public house. In 1926 it was declared redundant by the chief constable, but was reprieved. 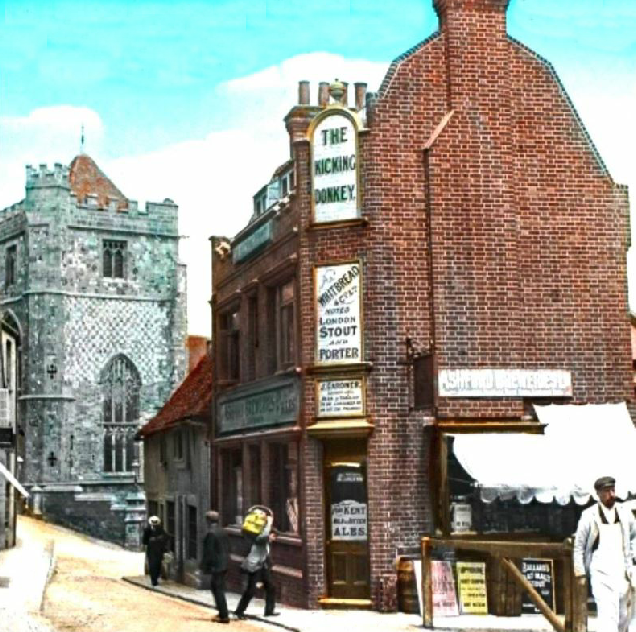 In 1936 it was granted a licence for bar billiards, a game then coming into vogue, providing it was not played on Sundays, Christmas Day or Good Friday. On these days the landlord was required to dismantle the billiard table and store it in a cupboard so as not to offend St Clement’s Church at the end of the street. The Kicking Donkey was one of the first Hastings pubs to promote the game of bar billiards, which started in England in the 1930s and was developed from the traditional game of bagatelle. Sussex in particular was – and is – a hot bed of bar billiards activity.

In 1947 the Kicking Donkey became licensed to sell wine but nine years later, in 1956, it was declared redundant a second time and was closed. Its history as a former pub made it a desirable residence and in 1995 it was sold for £97,000. 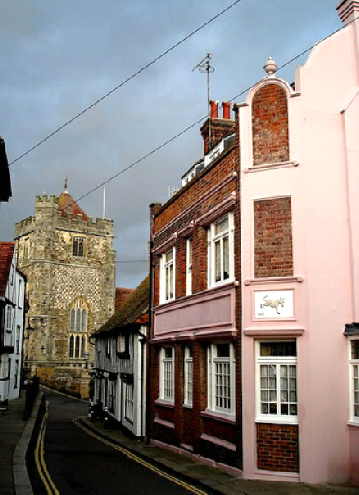 Site of the Kicking Donkey 2009  Russell

In 1952 the Hole in the Wall  finally became fully licensed. Ron and Rose French ran it from 1957 for its final 14 years, before moving to the Jenny Lind in 1971. Its sign showed a fist holding a bottle of beer through a hole in a brick wall. The name is misleading as the pub was situated some distance from the old town wall. A second Hole in the Wall existed in Claremont in the 1860s. 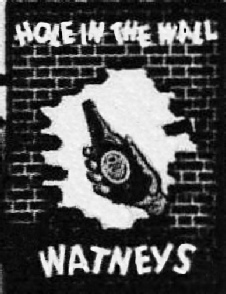 The Kicking Donkey is listed as a beerhouse in the 1855 directory when the licensee was John Heathfield, although the building is much older. It was inherited by Mary Glyde in the 1860s, described as a fly proprietress and beer house keeper who became bankrupt in 1866. 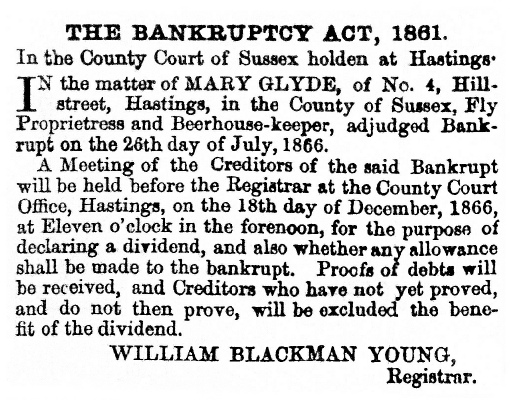 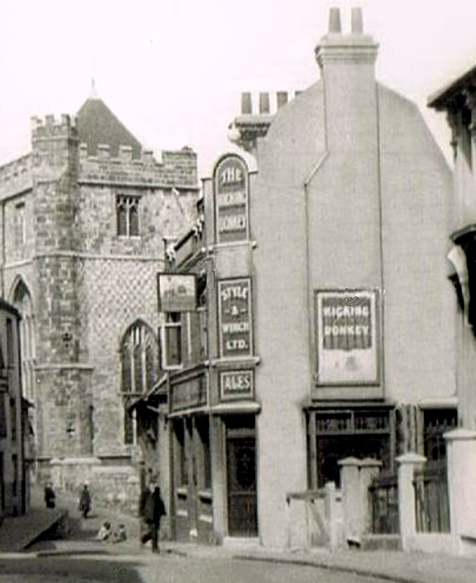 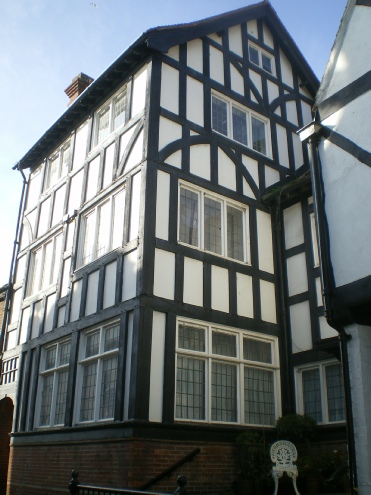 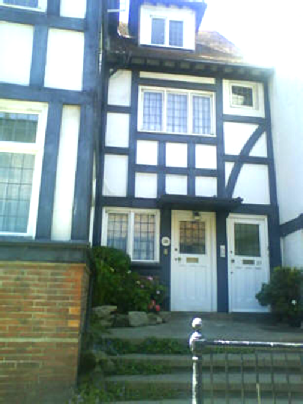 Both premises proudly display their history. Above the original doorway a bas-relief of a kicking donkey recalls this pub of the past, while the private house opposite has kept the name Hole in the Wall.