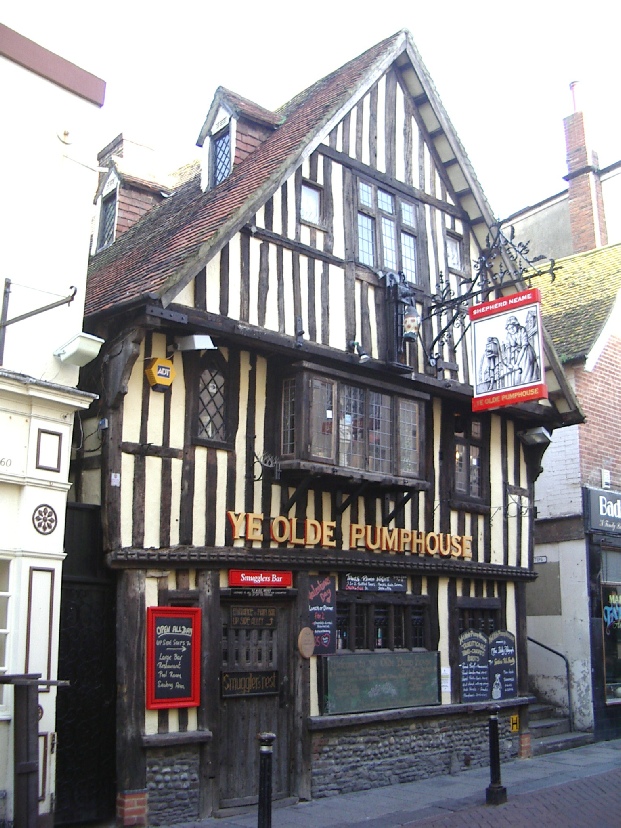 Ye Olde Pumphouse in George Street, at first glance, appears to be one of the oldest pubs in Hastings. However, as a pub it is less than 70 years old, having opened in 1956.  Before the Second World War it was three separate dwellings centred on a well-known boot and shoe shop owned by two brothers, Sidney and William Carey.

The Wiki Sussex Pub Guide states that the Barnes family lived here from about 1890 until 1943. The photograph below was taken in 1941. 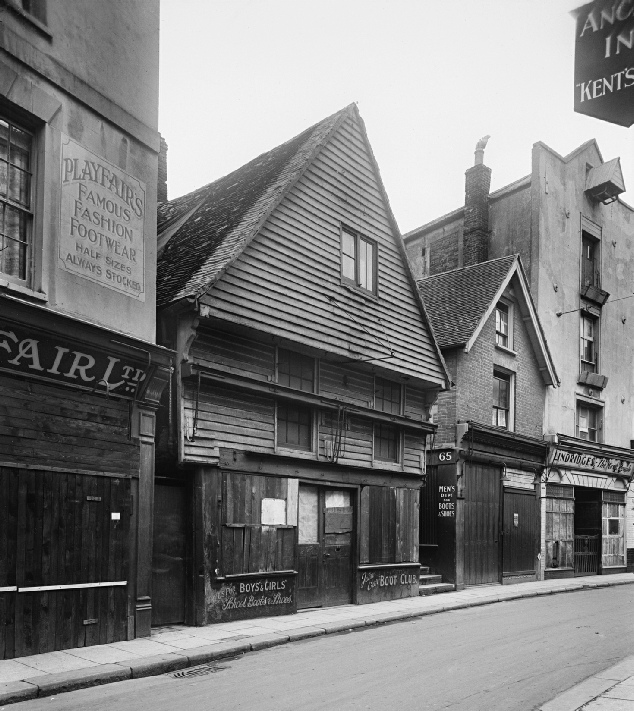 Although the building suffered war damage it was not directly hit but by the end of the war it was in a dilapidated and poor condition.

In 1946 plans were submitted and repairs began but came to a halt in 1947. The owner, William Anthony Newman was notified by Hastings Corporation to carry out repairs. He claimed to have ‘saved the building for the town and improved it’. But the Magistrates argued the building was ‘war damaged, dilapidated and detrimental to the amenities of the neighborhood’ and ordered Mr Newman to carry out urgently needed repairs and refurbishment. 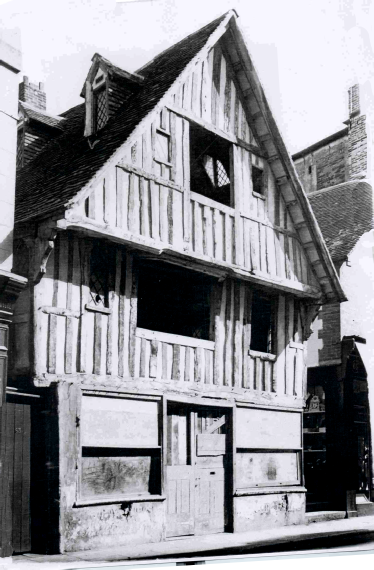 The original building before the fire in 1952  Hodges

Then in 1953, says the guide, a fire destroyed a large part of the  building. In 1954 the Hastings Magistrates Court mistakenly claimed that the building had been scheduled as an 'ancient monument' by the Ministry of Works and because of its status could not be demolished. In fact it had been listed as a Grade Two historic building in 1951 and 1952, not an ancient monument. The court then directed Newman to restore and refurbish the building, which he did. The Mock Tudor frontage was created by Newman himself incorporating old timbers from bombed High street properties and, it was claimed, ‘from an old shipwreck’. It then opened as a pub, the Pump Room, in 1956. 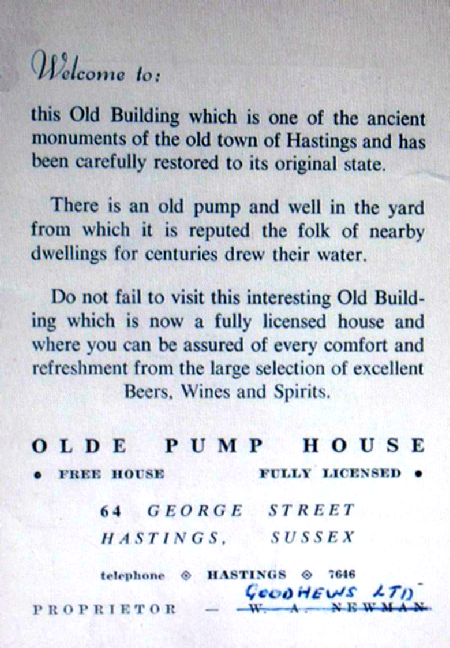 This sheet dates from 1959/1960. It still promotes the myth that the pump house was an ancient monument.

Turning modern buildings into ‘olde’ ones was not so unusual at the time. After the war, damaged buildings were bought up cheaply, ‘tudorised’ in the style of Mock Tudor and sold at a good profit. Another example of this is the old cottage next door to the Cinque Ports Arms.

The first landlord to 1959 was Sydney Cole who had previously been the licensee of the St Leonards Pier Pavilion and Lounge from 1952. The pier was immobilised during the war and never reopened but Sydney Cole held the Pavilion licence ‘in suspension’ until 1955/6 when it was transferred to the newly opened ‘Pump Room.’

Cyril Pelluet frequented the Pump House as a teenager in the late 50s. “There was only the downstairs bar at that time which was decorated with sailors’ hatbands. We liked it because it was frequented by the ‘Teds’ or teddy boys and was a local centre of fashion with drape jackets, drain-pipe trousers and DA [duck’s arse] hairstyles. This was about 1957/8. Later John Kilroy took over as landlord. An Irishman, John had a magnificent handlebar moustache and with his wife, Noreen, transformed the upstairs bar into the place to be seen on a Saturday night and it’s where we met up with our girlfriends later in the evening. John Kilroy was the epitome of a gentleman and we all had the utmost respect for him. Another landlord, Arthur Wilkinson Bell, introduced curry evenings in the early 1960s, which was quite revolutionary at the time.”

Michael Rose recalls: “Prior to 1957 when I was on leave from the navy, I used to drink in the Horse and Groom at lunchtime and in the Pumphouse in the evenings before moving on to the pier, which had an extension licence. In these two pubs I would meet up with mates on leave. The Pumphouse had a lot of naval customers then and a collection of naval memorabilia, hats and so on.” 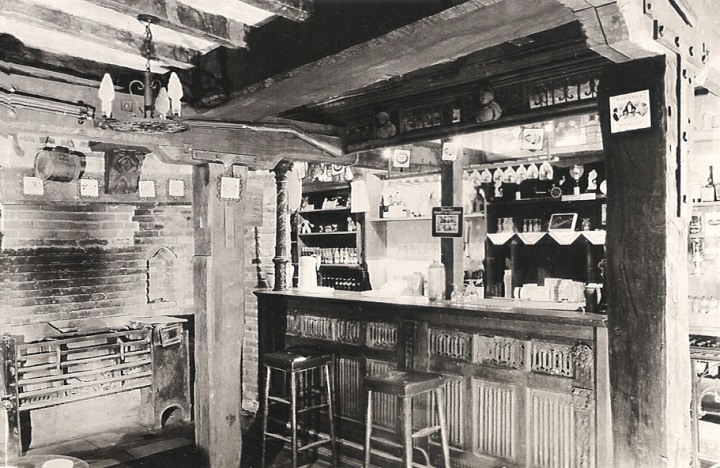 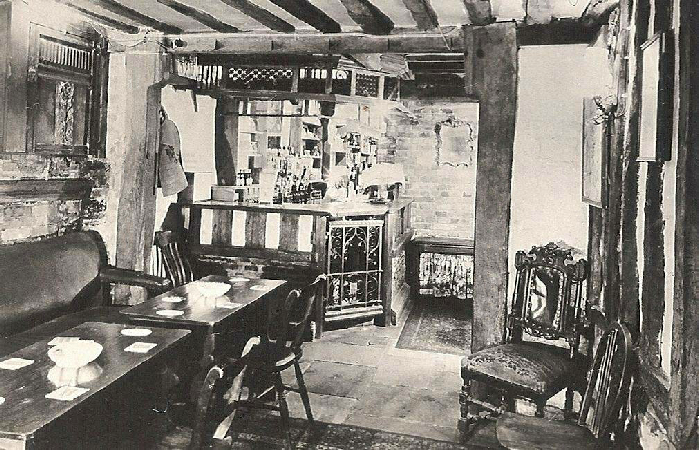 Peter Skinner drank there in the late 1960s, by which time it seems the image had changed. “The Pumphouse”, he believed, “was more middle class, more conventional, [and served] salesmen and people on the make. The Pumphouse was the pub to meet women. I met my first long term girlfriend there when she was a student from Norway. I spilled some lager over her because I was drunk and that led to one thing and another. We lived together for 10 years.

“I never saw the Pumphouse as a very old pub, even though it had mock beams and so on. The Anchor seemed much older with its warren of little rooms. The Pumphouse was a harbinger of things to come, a little artificial, a little more knowing and commercial than the other pubs in that area. It was a nice pub, always a little different, not rough, and it was more friendly. Women found it more friendly.”

A customer from the 1970s known only as Steve remarked: “To the surprise of many, including me, this beautiful pub is not Elizabethan but was crafted from old timbers after the Second World War. It matters not. I don’t know whose idea it was to create this exquisite feature of George Street, but I'd like to shake their hand. It is quite extraordinarily well done for the period.I was a regular as a teenager in the little snug bar at the back during the years 1978 to 1980. Beer, vodka … darts, conversation and Space Invaders. The cosy glow in the bar and the snow blowing outside. Companionship inside. Thin Lizzy and the Boomtown Rats on the jukebox. I love that pub.” 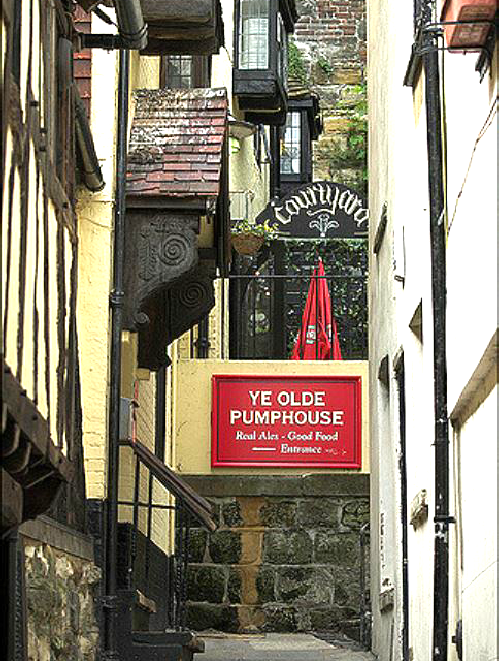 Side entrance and steps up to West Hill 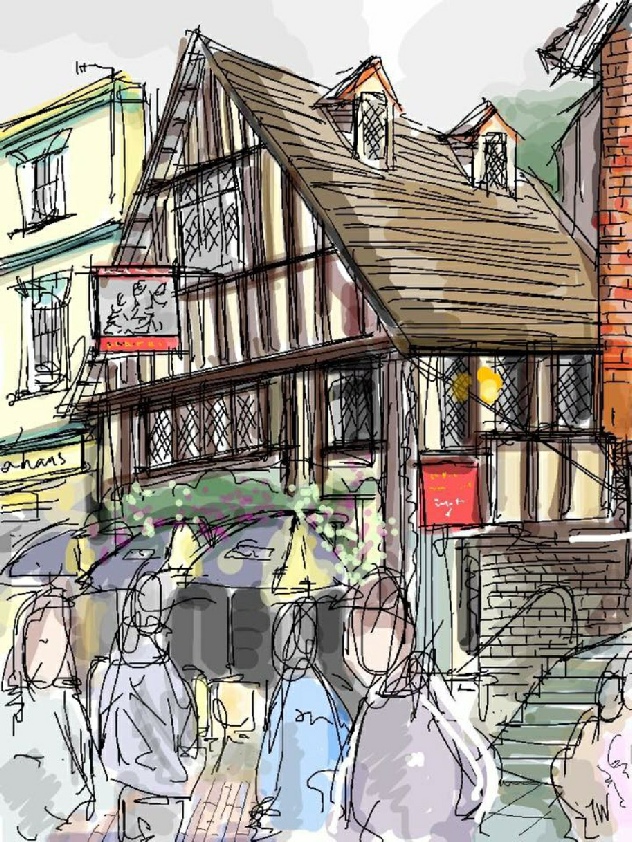 Watercolour of the Pumphouse, date unknown

The pub’s name is derived from the site of a freshwater pump which provided this part of Hastings with some good quality water, filtered by the local sandstone. The pump, which never ran dry, is now attached to the front of the half-timbered building and is thought to be 400 years old. Thomas Daniels, landlord of the Anchor opposite, from 1805, owned the pump in the early 19th century and for many years it was known a Daniel’s pump. The ground floor of the Pumphouse was used by the Anchor as a store for wine and spirits.

Up until the Second World War, a tax of one penny was paid on the pump every year. In the past, the pump was valuable property, producing a substantial income from water sales for the owners. Most other pubs in the Old Town used its pure water and would use no other for the ‘breaking down of spirits’. Before the First World War, spirits were supplied to pubs at a high strength and publicans were required to break them down with water. The legal maximum dilution of spirits was 25 degrees under proof for whisky, brandy and rum and 35 degrees under proof for gin. So as a supplier of pure water, this site has had a relationship with the pubs of the Old Town for more years than it has been a pub itself.

Regardless of its origins, Ye Olde Pumphouse has maintained its value as a building and in 1982 it was included in ‘a million pound deal’ by Whitbread, when it purchased a number of pubs in the south-east. 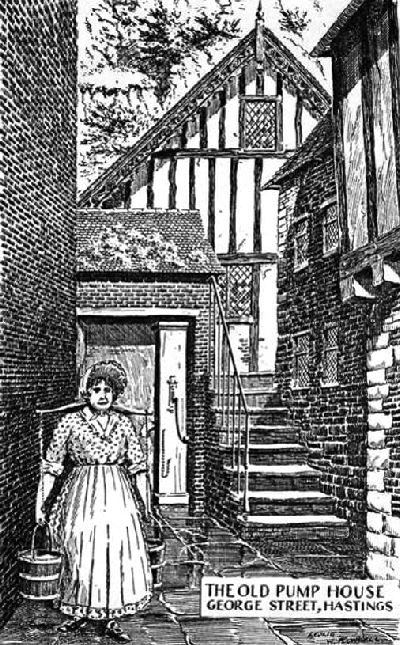 Tax demand for one penny on the Pump House 1926 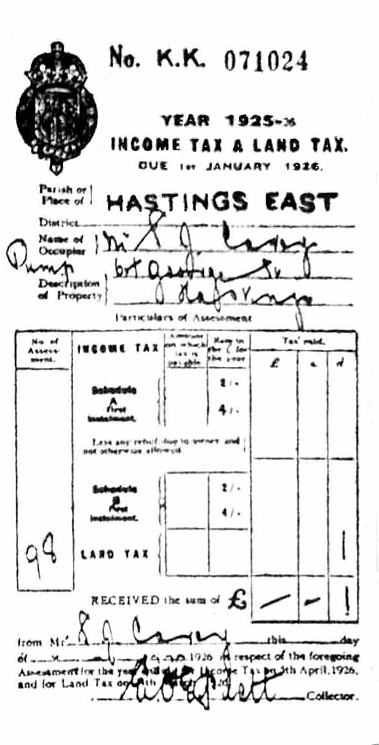 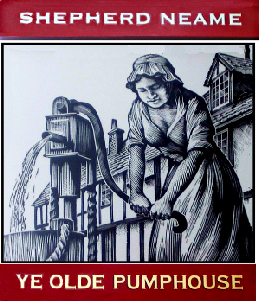