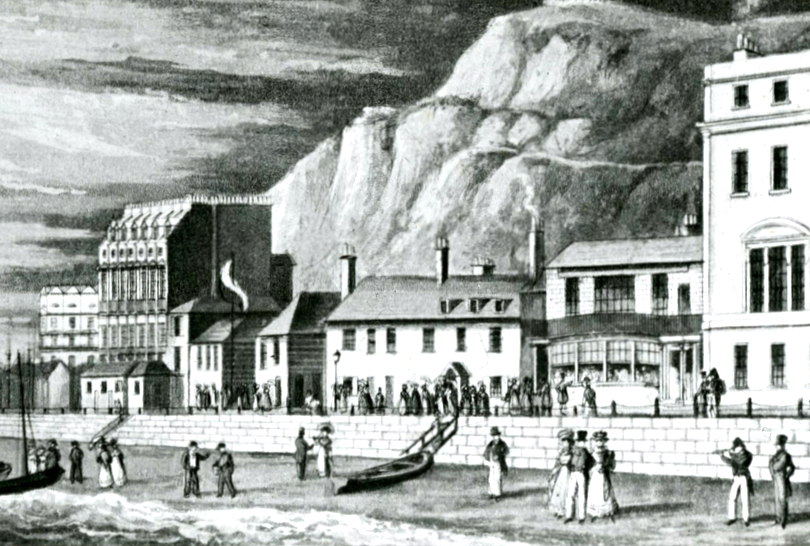 The Albion often suffered from bad weather and high tides from across the road, and in 1836 tempestuous weather and a hurricane blew the windows in. Again in 1855 during a great gale and storm, the sea reached George Street and was so fierce it dislodged the york paving slabs on Marine Parade and threw them against the Albion ‘like bits of wood’.

The Albion stands on the site of Whitby House built in 1689 and licensed in 1730. Whitby House was demolished and rebuilt in 1831 and reopened in 1832 as the Albion Hotel, a coaching inn on the then fashionable Marine Parade. Excellent stabling and lock-up coach houses were in close proximity at the rear of the hotel in George Street. 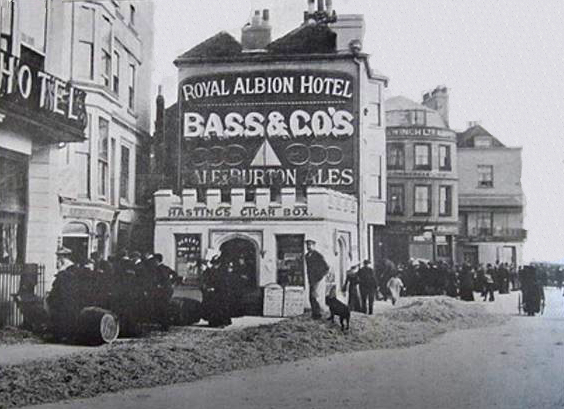 Royal Albion Hotel on extreme left, after a storm 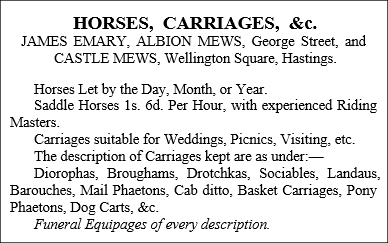 From about 1850 to 1890 the Albion’s success fluctuated with the Old Town economy which meant landlord James Emary, (1852 to 1864), was always seeking additional business opportunities. After the opening of Hastings railway station in 1851, he procured an agreement with the railway company allowing his flymen the right to ply for hire to the exclusion of some other horse-drawn cabs. He also undercut by charging lower fares, a move causing much resentment. 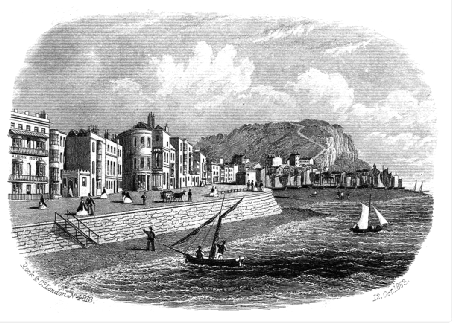 In 1879 the shades became separately owned and licensed, and changed its name to the Albion Tavern, although it was still referred to as the Shades for many years. It continued as an independent beerhouse until 1916 when it was declared redundant and closed. None of the initiatives taken by various landlords were enough to compensate for the poor economy and all of the licensees between 1850 and 1890 had difficulties making the hotel business pay. In 1894 the life of the Albion as an hotel came to an end following a pattern in the town.

The Palace and the Havelock were in difficulty. The Swan, York and the Warriors Gate all provided hotel accommodation at one time but by the 1880s they had been remodelled as public houses. A section of the Albion in George Street was converted into an off-licence and shops and the hotel became apartments. The magistrates expressed regret at the inevitable change from hotel to public house with three bars, but renewed the licence ‘on condition that no bar be connected with any of the flats in the building’. Four years later there were just two bars, the usual saloon and a public bar with swinging doors to attract the ‘excursionists’.

‘Excursionists’ or day trippers, were also attracted by the nearby Empire Theatre of Varieties, a music hall designed by architect Ernest Runst and opened in 1899 starring Marie Lloyd and Tiller’s Eight Fairy Dancers. Marie Lloyd, otherwise known as Matilda Wood, and Ernest Runst were both members of the East End Wood family which had financial interests in a number of theatres including the Empire Theatre, Hastings. In 1899 Marie Lloyd acquired the tenancy of the Royal Albion for her father John ‘Brush’ Wood who became landlord for two years.  All the visiting music hall stars were among his customers including Kate Carney, the Coster Queen who ran competitions on stage with her famous song: ‘Tanner mouth organs, they sound alright’. In 1913 the music hall became a cinema and is now the De Luxe Leisure Centre. 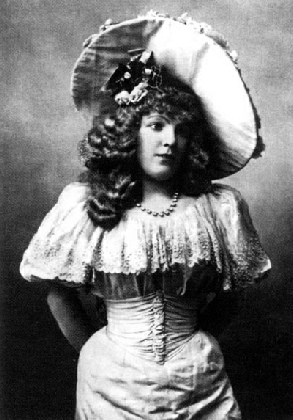 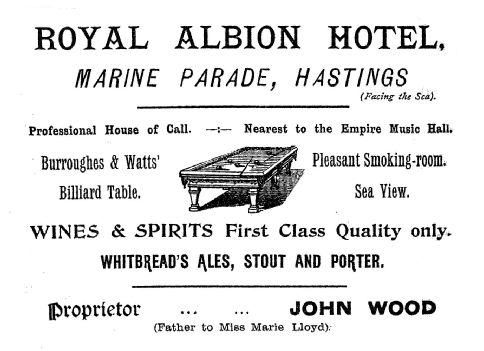 The Albion was closed and unoccupied in 1910 after the building was sold and re-licensed. In 1914 at the start of the First World War it closed again and was very nearly declared redundant. Then at the end of the war it closed yet again from November 1918 to January 1919.

From the 1930s to the 1970s the pub was tied to Younger’s Brewery of Edinburgh and was their most southerly pub. The link with Scotland explains the bagpipes behind he bar and the tartan designs set into the wall panels in the dining room known as the Scottish Bar.

During the inter-war period the Albion had at least 15 landlords but closed again from 1941 until 1945. 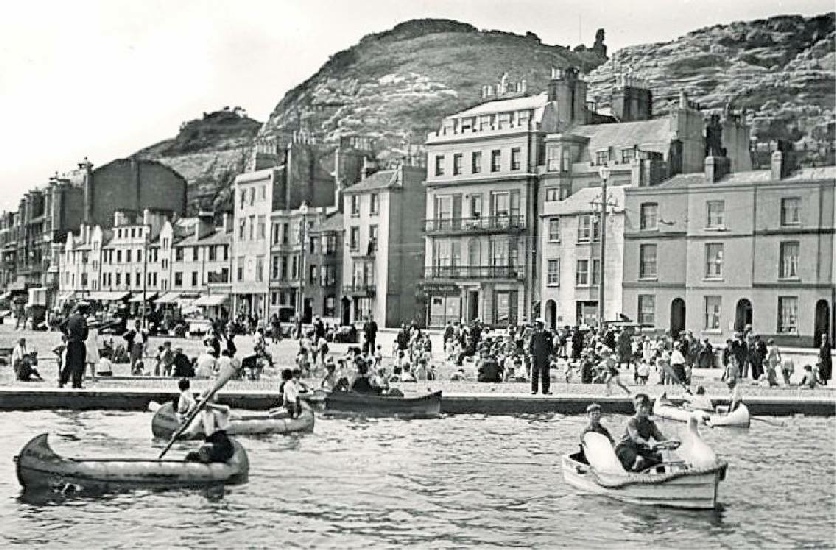 The Albion and Marine Parade 1950s

In 1963 the building had to be evacuated, when a leaking gas main caused a series of explosions followed by a blast, sheets of flame and smoke. Thirty-three people were injured and 22 properties were damaged on Marine Parade and George Street. The scene was described as ‘an experience worse than the war and like a miniature battlefield’.

The Albion was a venue on the ‘Old Town Rock Circuit’ in the 1970s and was also the home of some ‘Free Form music’. One evening a local journalist observed ‘three musicians huddled in the corner like 19th century impressionists sitting in a street café in Paris. As they attempted to create some new, improvised, experimental music, sometimes they lost their way. But gradually a return to the original theme was perceptible and was greeted almost like a long lost friend.’ The three musicians were drummer Dave Saunders, guitarist Adrian Underhill and bassist Roger Carey. 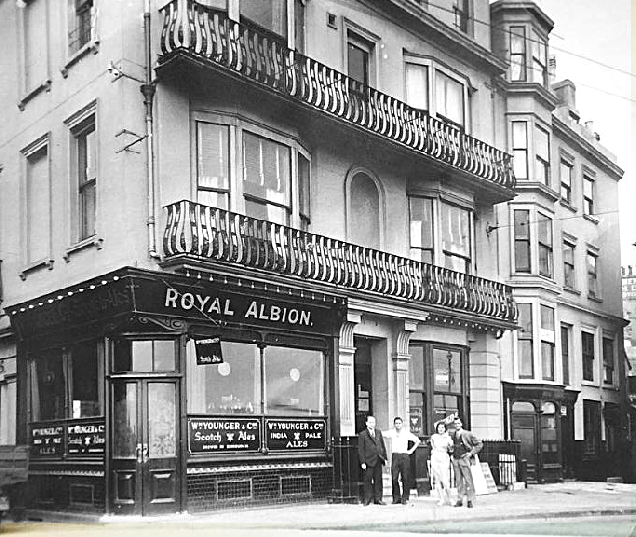 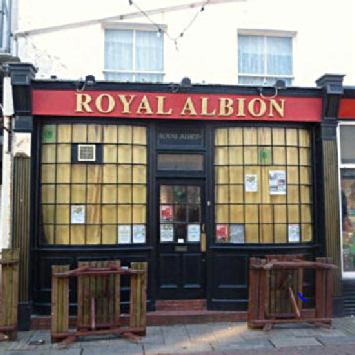 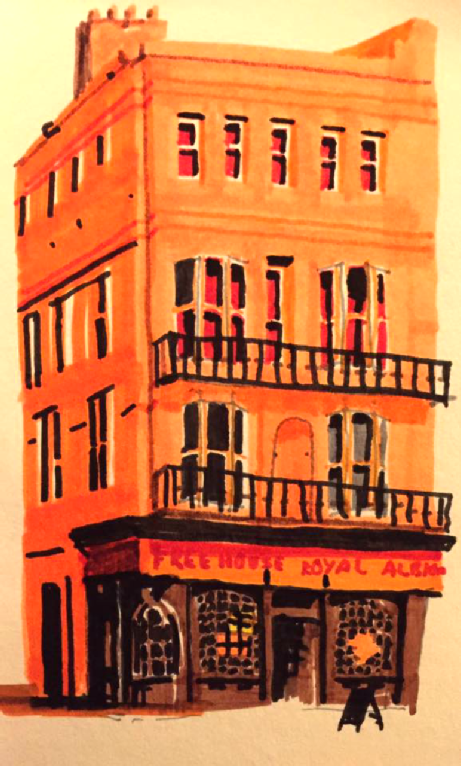 Painting of the Albion 2017  Tom Marsh 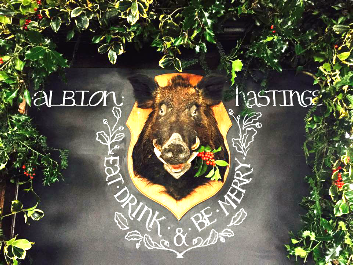 In 1983 the Hastings Jack in the Green festival was revived on May Day after an absence of 75 years. The participants, known as Bogies, sometimes take their breakfast in the Albion. 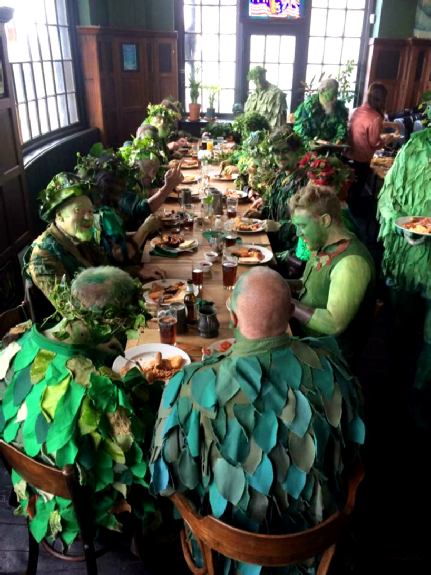 In 2016 the Royal Albion changed its name to the Albion an alternative, poetic name for Great Britain. In the mythical, Greek story of the founding of Britain, Albion is portrayed as a giant son of Poseidon, the Greek god of the sea and a contemporary of Hercules, who killed him. Albion founded the country on this island and ruled here. 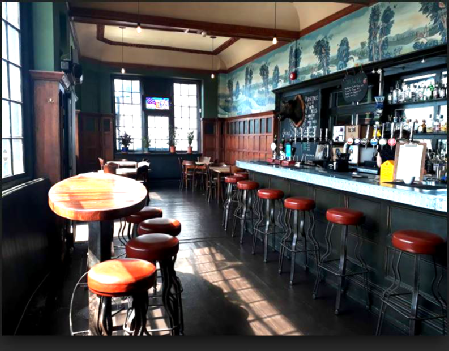 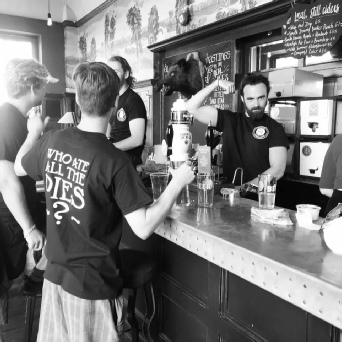 In 1863 landlord, James Emary, added two adjoining houses to the premises creating new smoking rooms and a billiard room. The annual subscription for the Albion Billiards Room promoted as a sort of gentleman’s club, was 10s 6d [52½p] a year.

In 1877 the hotel had four joint licensees. One of whom represented the Glasshouse Colliery of Stoke on Trent and delivered and sold coal on their behalf. The coal arrived by boat and was unloaded on the beach opposite.

In common with several other hotels in the south-east the Albion maintained a ‘taproom’ known as the Albion Shades, on the other side of George Street. The term ‘shades’ originated in 19th century Brighton as a synonym for wine vaults, but was also a term used elsewhere as ‘oyster shades’. The Albion Shades came into existence in the 1830s and consisted of a large bar in George Street and a small private bar in Albion Mews (now the West Hill Arcade). It catered for the coachmen and ostlers who serviced the stage coaches next door and provided a range of carriages for hire. 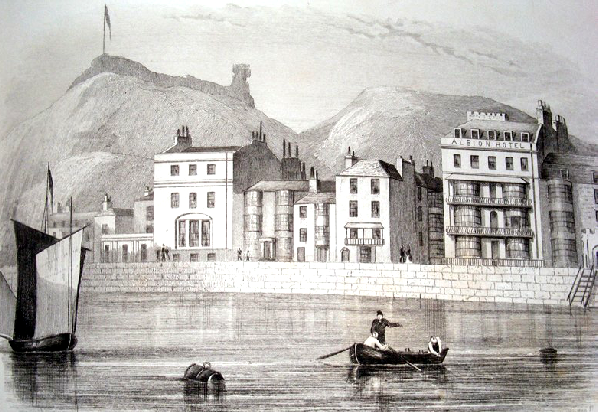 Albion Hotel on the right 1830