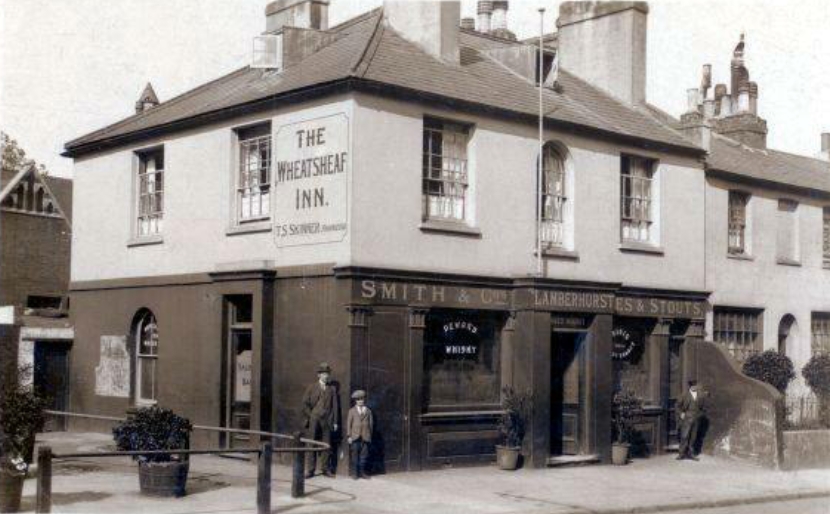 Bohemia’s early history is peppered with the surname of Jinks and many members of the Jinks (extended) family once resided in the district. In the second half of the 19th century, at least 25 people with this surname, in six family branches, lived along Bohemia Road. Their adult occupations ranged from the building trades, shop keeping (one was a greengrocer), taking in laundry and running pubs.

Bohemia’s first pub, the Wheatsheaf, was built by John Jinks, a bricklayer who had previously been a squatter on America Ground where he had a ready-made clothes shop. This was approximately where 40 Robertson Street is today. When the ‘Americans’ were given notice to quit in 1835, John Jinks moved to Spittleman’s Down, later called Bohemia Place and now a part of Bohemia Road. He built the sandstone wall on the eastern side of Bohemia Road (probably the walled garden), houses in White Rock and Prospect Place, and ornamental brickwork in Warrior Square. He was also an early landlord of the Wheatsheaf.

From 1848 to 1911 the Wheatsheaf was run by the Pratt family. In 1856 when the pub was advertised for sale, its stables (recently the Pizza Hut) and skittle alley were especially mentioned. In the 1850s some customers spent all day here drinking and playing ‘Four Corners’. This was a game played by throwing a large wooden bowl or ‘cheese’ weighing 6 to 8 lbs [2.7 to 3.6 kg] at four large pins placed at the corners of a square frame, from a distance of about 10 feet [3m].

During the time of the Pratt family, the Wheatsheaf was popular with skilled artisans and respectable tradesmen, who regarded themselves as superior to the unskilled labouring classes. These men, dubbed the ‘Aristocracy of Labour’, usually wore bowler hats and ties.  From 1913 until 1922 the pub was known as Ye Olde Wheatsheaf. In the latter year it was sold by the brewery for £4,000 and reverted back to its original name. 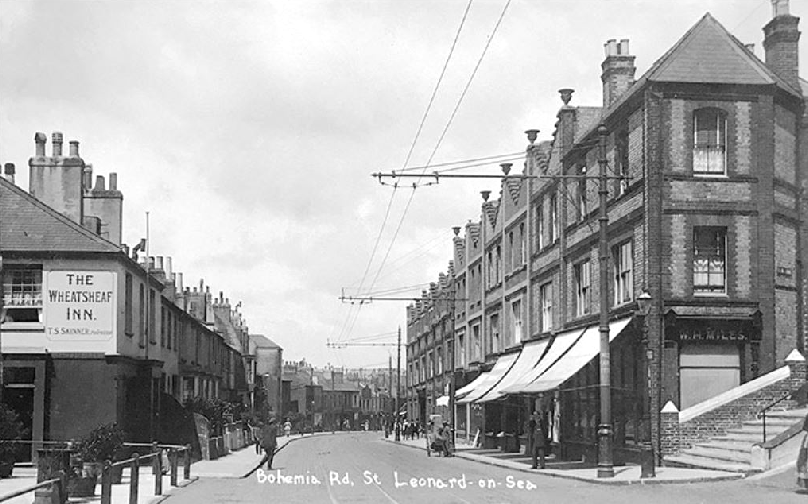 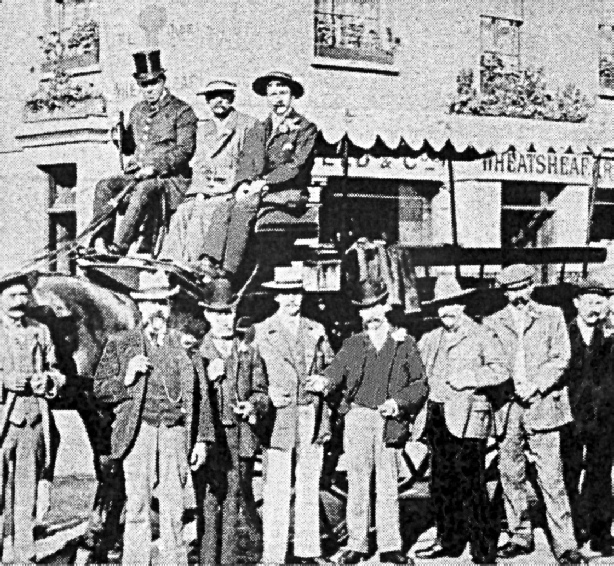 Outside the Wheatsheaf, date unknown

After 174 years the Wheatsheaf finally closed in 2010.

A short distance from the Wheatsheaf a beer house, known as the Bricklayer’s Arms, was located at 21 Bohemia Place, from at least 1853 (when it was licensed to a Miss Young) to 1868. In 1865 it was licensed to another member of the Jinks family, Fanny, probably John’s niece, a young widow aged 32. She fell foul of the law when she was summonsed for ‘failing to admit the police’ at 12.15 am. When the police eventually got into the house ‘they found two men drinking beer in an upstairs room’. The summons was dismissed after a caution with the comment: “We want to teach beer housekeepers that the police must be admitted immediately”. However, she was summonsed again in 1866 for ‘keeping bad time’. Her brother appeared in court on her behalf.  P.C. Marchant stated that about half-past eleven on Sunday night he was in Bohemia and heard a noise at defendant’s house. He went there and on looking in one of the windows, saw several men sitting in the room smoking. He saw one of the men take up a quart pot and drink from it. The door was unlocked and he went into the house. He saw defendant’s brother who said their clock was fast enough and that no beer had been drawn after 11 o’clock.’  Fanny Jinks was fined £1 with costs.

James Standen is shown next in 1867, but the Bricklayers is not listed after that date. It was probably the case that after two offences the Excise refused to renew Fanny’s licence or that she couldn’t cope with further scrutiny by the police. Equally, James Standen probably didn’t wish to be associated with the name of the Bricklayer’s Arms. In any case after 1868 it reverted to an ordinary residential house which later became number 132 Bohemia Road. 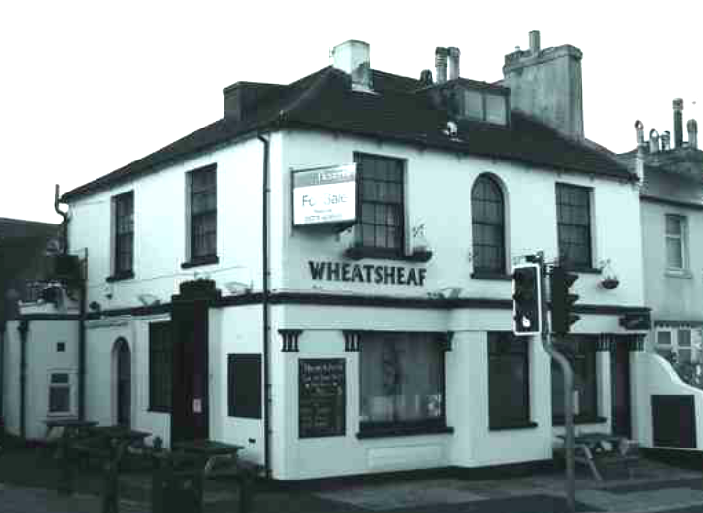 The 1871 census lists John Jinks (bricklayer) and family now living at 31 Bohemia Place and Fanny Jinks (widow) and family living at 26a Jinks Passage, possibly a twitten off Cornfield Terrace. She was then working as a laundress. The Pelluet family moved into number 132 in the 1930s and Cyril Pelluet was born there in 1940. He says: “As a child I always believed the house to be haunted and my father insisted it had been a pub sometime in the past.” Although 132 Bohemia Road is the site of the Bricklayer’s Arms, the original house seems to have been rebuilt. The more modern pair of semi-detached houses that stand today do not resemble the small mid-19th century terraced cottages that flank them either side. 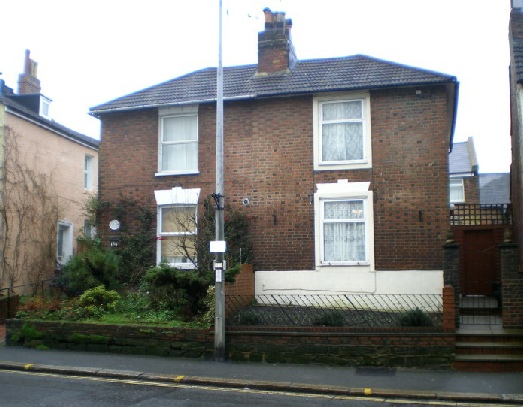 The site of the Bricklayer’s Arms  Russell 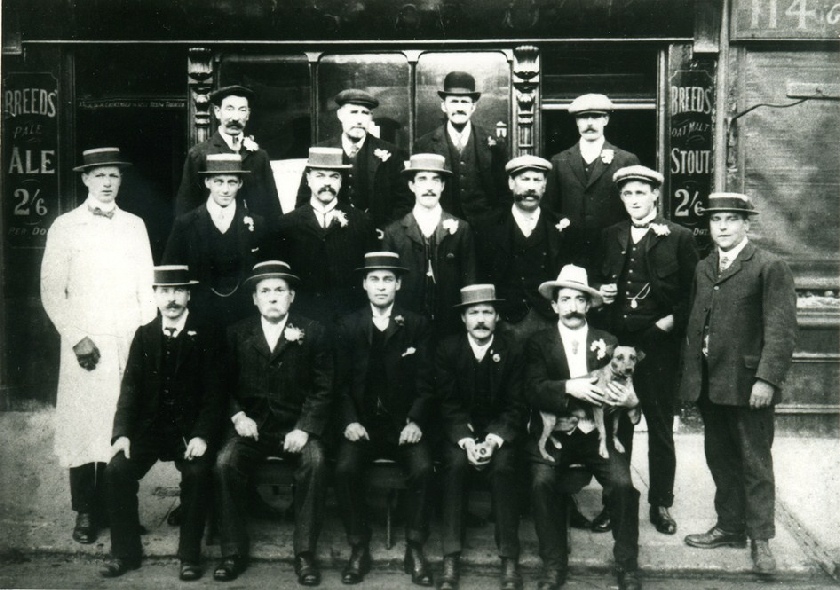 Outside the Hearts of Oak 1911

Sometime between 1868 and 1871, James Standen became the licensee of another beerhouse at 29 Bohemia Place. This beerhouse, known as the Barleycorn and later still as the Hearts of Oak, was tied to Breeds Brewery from about 1860. In 1881 Mary Waghorn held the licence until Thomas Player took over in the 1890s.  These were hard times and to make ends meet he also worked as an undertaker. A threat arose in 1892 when a grocer’s shop opposite started selling beer and spirits. Thomas Player opposed the licence and sent one of his customers in for some bacon, cheese and tea. The customer reported back that all he could buy was alcohol. There were no groceries. The grocer’s licence was not renewed.

John Standen (who lived at 35 St Paul’s Road) was landlord from 1907 until 1924 and organised the Hearts of Oak Slate Club, a local benefit society that had 80 members. A typical Christmas pay-out in 1910 allocated £1.7s 0d (£102 today) to each member. In 1922 he was summonsed for giving a glass of beer during prohibited hours to a thirsty coal merchant who was delivering the coal. For this offence he was fined 40s. He regarded his beerhouse as a man‘s pub. “I never admit women”, he said. However, when the police visited in 1926 to ‘establish the custom’, they counted nine females among the drinkers. The police described the tap room as “indifferently lit because there were no windows. Daylight passed into the bar through the glass door panels and the electric light was on all day.”

The Bohemia community considered the Hearts of Oak cellar to be the finest in Hastings. “In summer the beer just comes up beautiful and cool”, never the less in 1927 the pub was declared redundant and closed. 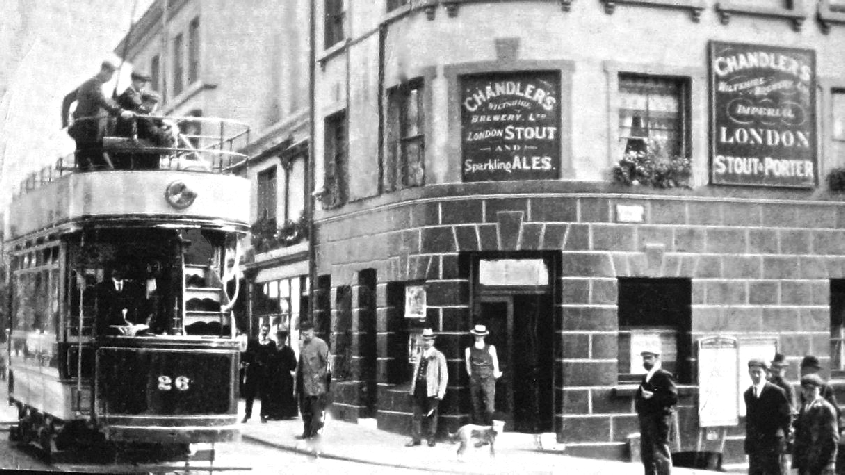 The Bohemia Arms first opened in 1867 on the corner of Tower Road and Bohemia Road and for most of its life it was a simple beerhouse. It is remembered most as the home of actress Gwen Watford. Percy Watford, Gwen’s father, was landlord from 1931–1955 and we know that the family lived there until the end of the Second World War. She made her stage debut, aged 17, at The White Rock Theatre, Hastings, before moving to London to train at the Old Vic. Gwen made her film debut playing Lady Usher in The Fall of the House of Usher (1987). Her father, Mr Watford as he liked to be called, is remembered by Bohemia resident, Vic Chalcraft for his pointed and waxed moustache. 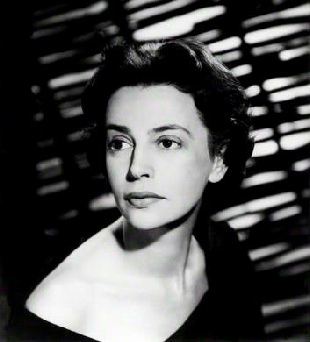 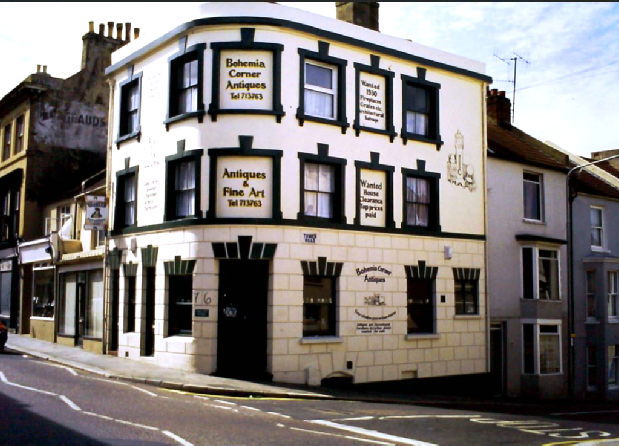 Site of the Bohemia Arms

The last landlord was 21-year old Jim Elvery who, in 1969, was the youngest licensee in Sussex and Kent. The two bars then became a single bar curving around the corner into Tower Road. The Bohemia Arms closed in 1970. 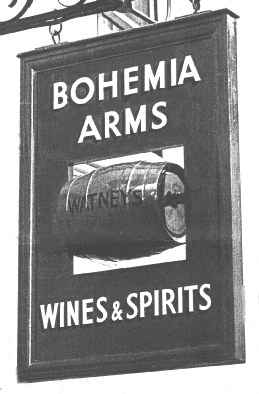 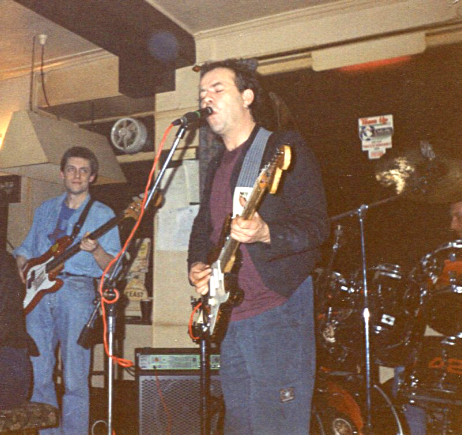 The Pullbacks performing at the Wheatsheaf 1993

Richard Moy, was the first landlord and applied for a full licence in 1863 and 1864. He moved here from the ‘Cross Keys’, Marylebone in about 1860. The Prince of Wales was the second fully licensed pub in Bohemia, after the Wheatsheaf, in 1835. In 1872 a Coroner’s Inquest was held here into the ‘shocking suicide’ of a 40-year old gardener who lived nearby in Bohemia Road. He was found by his wife hanging from a bed post by a piece of clothes line. Their 11-year old son was a witness. His father had said to him: “Goodbye, I shall be missing when you come home from school, be a good boy to your mother and go to school”. The Inquest concluded that he had ‘committed suicide whilst in a state of temporary insanity’. He was buried in Bohemia Cemetery.

During the Second World War the pub was run by Roland ‘Jack’ Berwick. Roland worked as a ‘Gentleman’s Gentleman’ for an American millionaire before the war and ran the pub from 1944 until his death in 1946. His widow, Maggie May Berwick, took over until 1948. After the war the Prince of Wales had returning prisoners of war among its customers and this is where Roland’s daughter Lena Berwick met her future husband Norman Sendall. Their daughter was born here in 1947. The family now live in Silverhill. The pub closed in 1971 and became the headquarters of Hastings Labour Party. 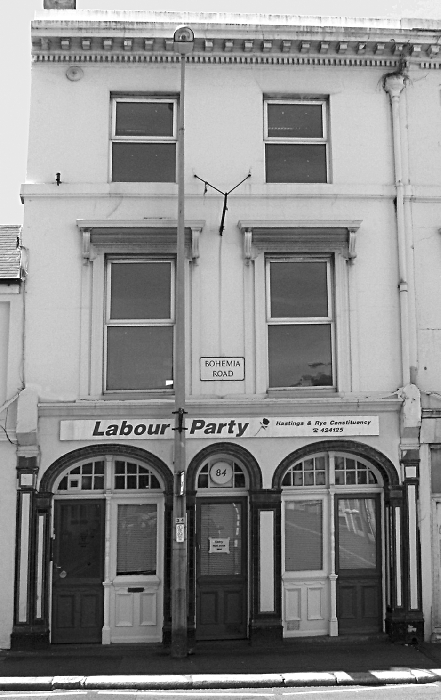 Site of the Prince of Wales  Russell 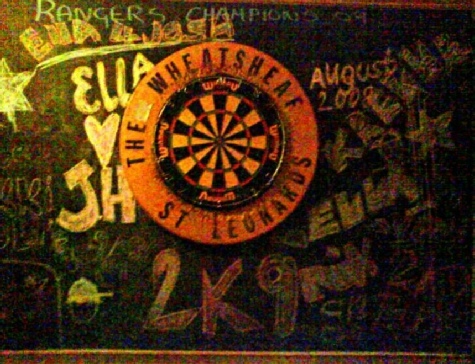