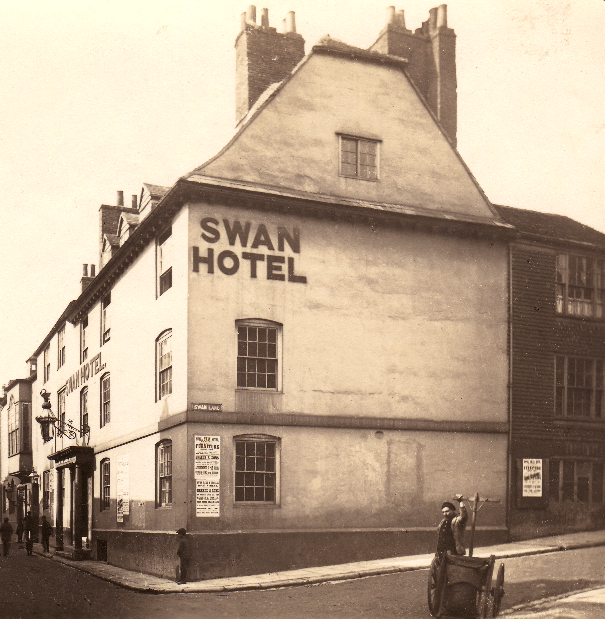 The arrival of the stagecoach in the early 1700s was a major stimulus to the growth of the Swan and to the development of the (Old) town. As it took on the role of a coaching inn, the Swan became an important factor in the movement of people and goods in and out of the town. From the 17th century Swan landlords acted as local postmaster for the developing Post Office, employing post boys to deliver and collect post at inns along the routes to London and elsewhere. As a posting house, the Swan provided a complete range of transport services. You could have your horse baited (fed and watered) or you could hire a horse to ride or to use with your own carriage.  By the mid-18th century the Swan had acquired several coach houses, stables with granaries, a harness room and a brew house. By 1797 the three-day journey to London had been reduced to one day, changing at Tonbridge.  With the opening of Hastings railway station in 1851 the stagecoach and the Royal Mail coach saw their final days. Swan landlord, William Carswell, was reduced to delivering and collecting the mail from the railway station. 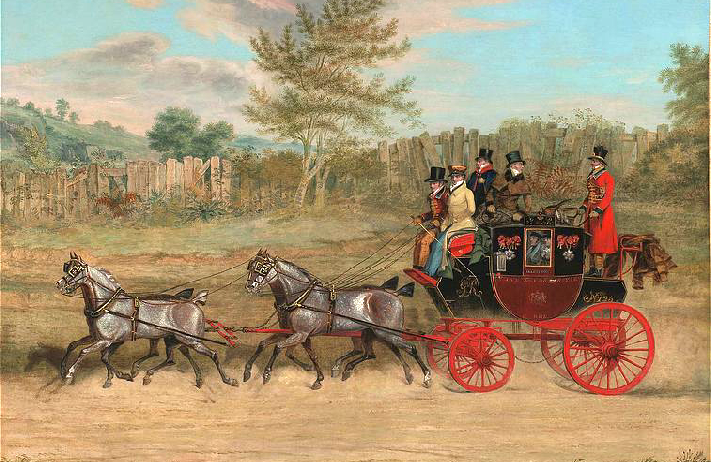 A noted landlord was Thomas Hovenden (1771–1775) who enlarged the Swan, in 1772, when he opened the new Assembly Room on the first floor looking out over the High Street. It was apparently such an immediate success that he advertised weekly ‘Card Assemblies’ every Monday where the popular 18th century card games of Euchre and Pharaoh were played. ‘All Gentlemen and Ladies to pay 1s.6d. for Tea, Coffee and Cards, at coming in. It is intended that once at least in every Month there will be a Ball, viz. on the Monday nearest the Full Moon; all Dancers to pay One Shilling towards the expense of the Musick.’

Between 1814 and 1817 the (Old) town doubled in size and the influx of fashionable visitors increased. The Swan, and the Crown were described as ‘the principle rendezvous of gentility’, and Hastings itself became one of the most fashionable seaside resorts in the country, a trend which unfortunately ended in the 1840s. The Swan Assembly Room was by this time a widely used social venue. It was at various times used as a market, a theatre, a sale room, an election headquarters, an auction house, a lecture room for the Mechanics Institute, a ballroom and a venue for the Hastings Flower Show. In 1784 the Assembly Room was even used to interview potential pupils for Hastings Grammar School. 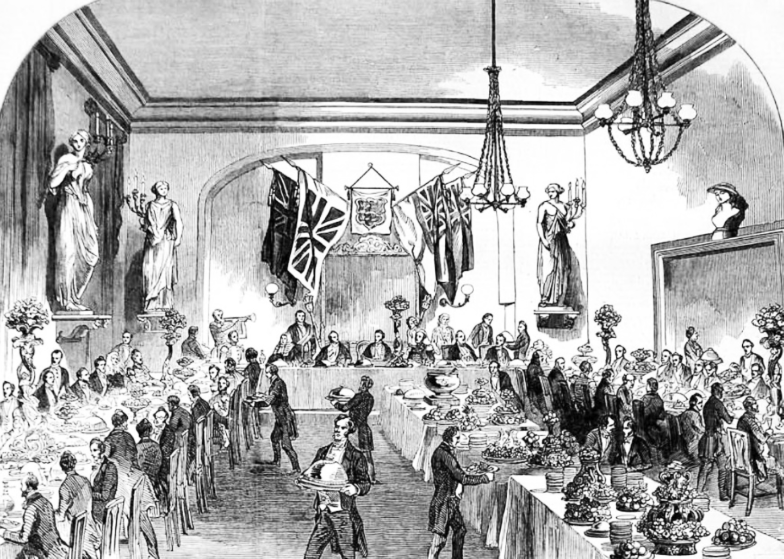 Many clubs and societies met at the Swan during the 18th and 19th centuries but the organisation which became the longest established society, meeting at the Swan, was a benefit society known as the Old Friendly or the Hastings Friendly Society. Formed in 1815 it met regularly at the Swan until the 1880s.

Among the major entertainers who appeared and performed at the Swan Assembly Room over the years were many musicians, singers, comedians and actors — some on tour, some local. Brett reported that: ‘1814 was one of the most crowded seasons within the memory of the then inhabitants of Hastings. The Swan was literally overflowing with good company. A celebrated ventriloquist named Charles gave a week’s performance in the Swan Assembly Room where fashionable meetings were said to be numerically the largest ever known!’ 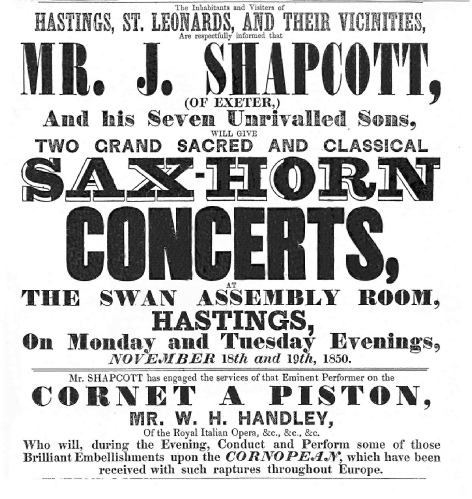 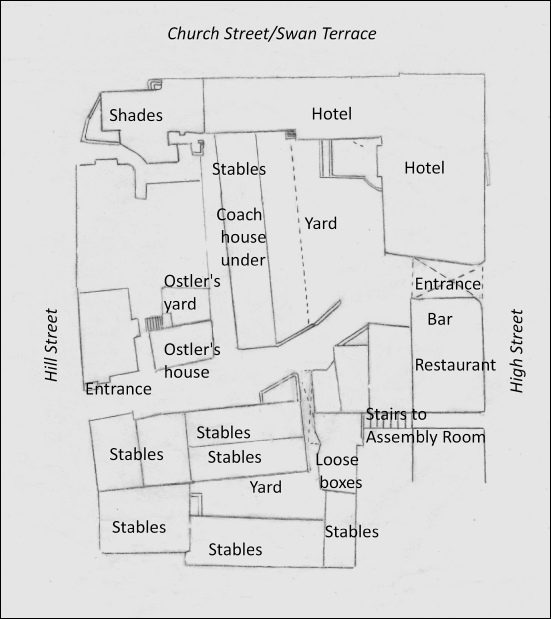 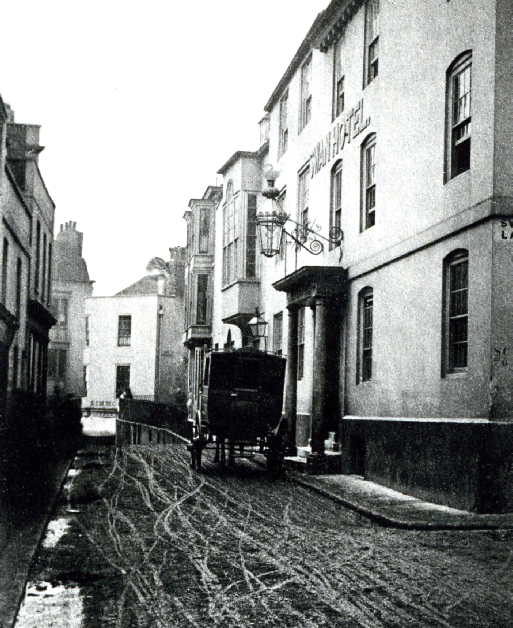 The Swan Shades, a second licensed premises within the estate, on the corner of Hill Street and Swan Terrace, catered for working-class customers, employees of the hotel and yard, and the servants of Swan patrons. On the south-east coast, the name ‘shades’ was commonly used for taprooms located behind major hotels, of which the Swan was a typical example. Shades bars came into existence because of the demands of the military personnel billeted along the south-east coast during the Napoleonic Wars.

Although the Swan enjoyed a considerable measure of popularity during the mid-19th century, it had become a social island in a sea of deprivation and squalor. A survey of the town’s drains and sewers in 1849 revealed a festering slum with residents suffering the worst of conditions. 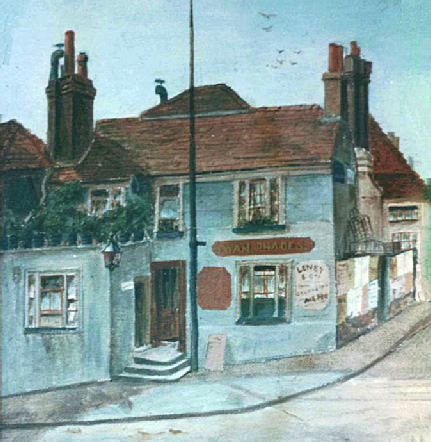 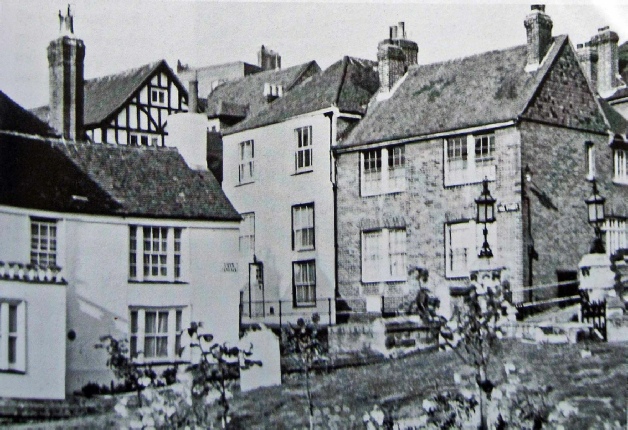 Swan Shades, in the foreground, as a private house 1963

The declining fortunes of the Swan continued throughout the 1870s and 1880s, until it was obvious the business was in need of some rationalisation.  By August 1889 the Swan and its estate had been largely demolished and the rebuilding of a new public house, three shops in the High Street and at least 14 houses was mostly completed by January 1890. The opening of the new Swan in 1890 brought much needed improvement to the area. Not only was the old Swan complex completely renewed when all its buildings were replaced by new housing, but the new Swan was set back by six feet [1.82m], allowing the High Street to be widened.

The transition of the Swan from an inn to ordinary public house reflected the social and economic changes that had taken place in the Old Town prior to the Swan’s demolition. The Old Town had now become a predominately poor area and the demise of the Swan as an inn was an inevitable break with the past. The new Swan was described as ‘a commodious building whose appearance is superior to most other houses in the High Street’. 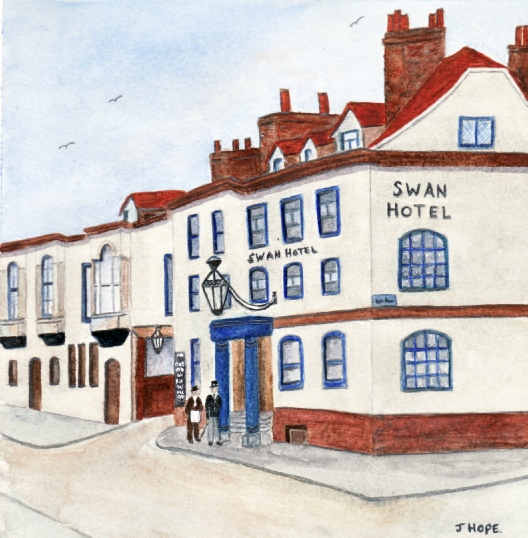 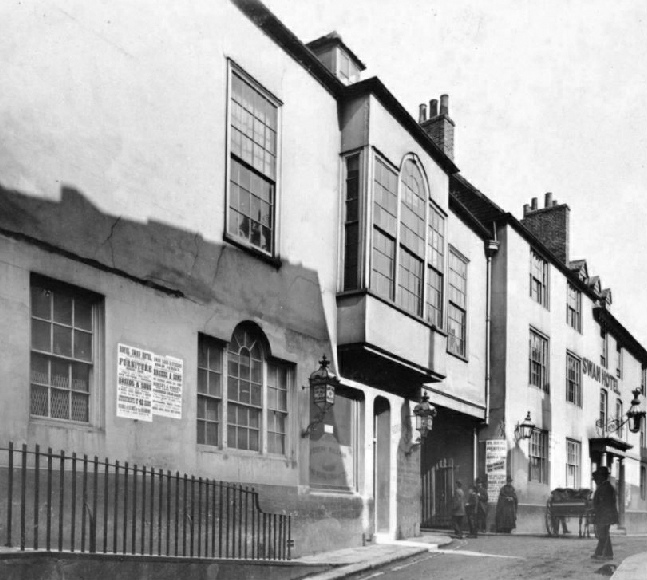 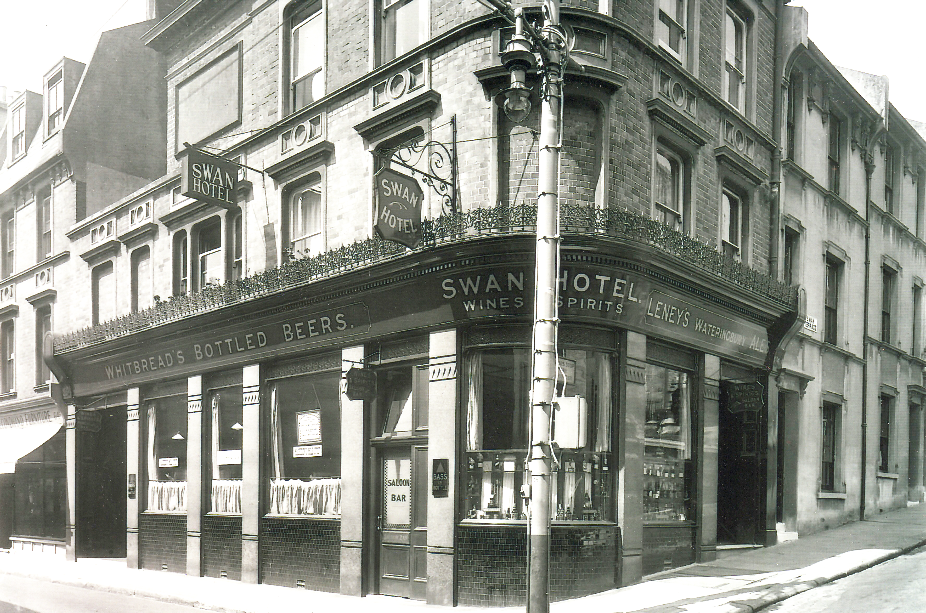 The Swan after rebuilding in 1889  Hodges

During the Second World War at least 33 public houses closed temporarily due to wartime conditions, depressed trade and stress. Several other pubs including the Bedford, the Denmark, the Norman and the Star in the West, along with much other property, suffered from bombing and air raids. The Swan however, managed to stay open until May 1943 when it was completely obliterated during one of the worst air raids on the town. The Hastings Observer reported that: ‘The attack was made by ten fighter bombers which, swooping out of low hanging clouds, crossed the coast at the eastern end of the town, and diving to roof-top height, dropped high- explosive bombs.’  As the Swan collapsed around its terrified customers and staff, falling masonry, the blast and splinters, killed or injured several people drinking and working in the bars. Eleven Swan customers and two staff lost their lives in the attack, along with two children aged three and six. 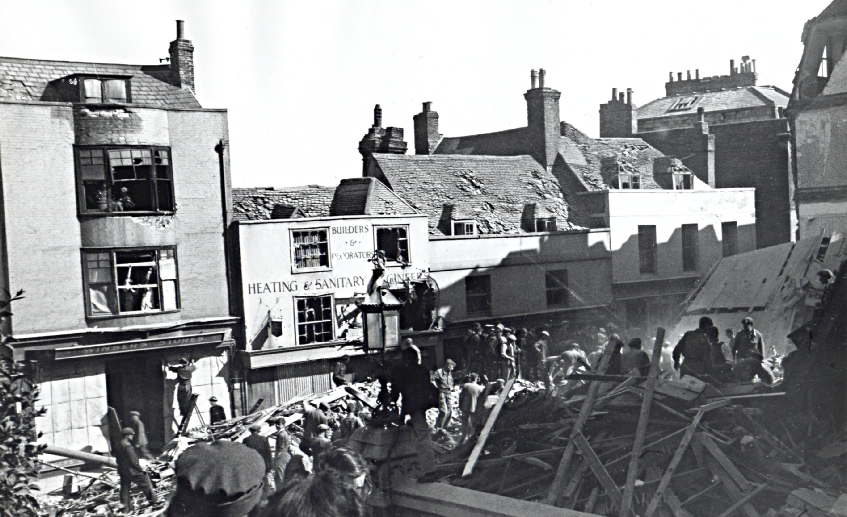 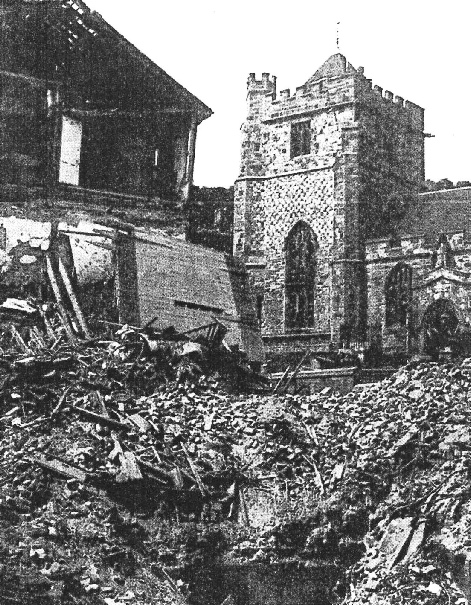 The Swan’s licence was held ‘in suspense’ by Walter Daish of Leney’s Brewery until 1946, when it was transferred to the landlord of a new pub in Hollington called the Wishing Tree. 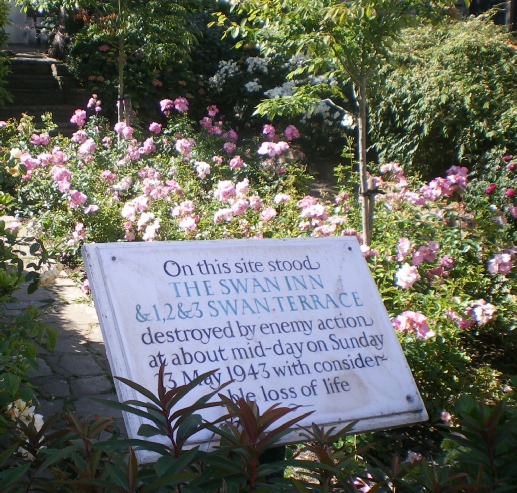 The earliest known date for the Swan is 1523 when John Levet of Holyngton was the occupier of a property known as Le Swanne, on this part of the High Street. It survived a devastating fire in the High Street during the 16th century.  For a relatively short but important period of its life (approximately 1770–1850), the Swan was a dispenser of luxury and prestige to royalty, gentry and wealthy visitors from the metropolitan and county elite. 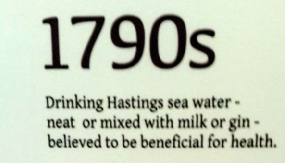