There has been a pub on this site since Tudor times and a plaque inside stated that until 1825 the Kings Head, then known as the George, was ‘next door to the gaol in Courthouse Street’ (today the A259). Until its closure in 2009 the Kings Head was acknowledged as Hasting’s oldest pub an accolade now reserved for the Bull Inn, Bulverhythe.

The George has always been a popular pub name and the first mention of it in Hastings was in the will of James Wexham, a Hastings draper, dated 1500. He refers to ‘Maister John Fowler at the sign of the George in Hastyng‘. Later the pub was run by Richard Lane, whose will is dated 1540. It seems from the descriptions given in 17th century deeds to have been the building at the eastern corner of Courthouse Street, since known as the Kings Head.

Mr Sackville Franke paid the corporation a quitrent of 2s.6d [12.5p] for the pub in 1642 and in 1796 it was ‘commonly known as the George’ and occupied by John Sargent a ‘Maltman’. In 1779 an advert appeared in the Sussex Weekly Advertiser asking for ‘gentlemen volunteers for the privateer Liberty, to be recruited at the George’. A privateer was a privately armed and manned ship commissioned by the government to fight and harass enemy ships, in this case probably American. In other words legalized piracy.

Over its lifetime the Kings Head belonged to at least six different breweries. It was originally owned by Burfields and company of the Phoenix Brewery, Courthouse street (now Deeday’s Yard?). In 1908 it was sold by Burfields to Smiths Lamberhurst Brewery Kent. The pub then became tied to Smiths and was a prominent part of its estate.

The sepia photograph (shown above) shows Smiths signage which dates the picture from 1908 to 1912 when the pub was sold again. Another photograph, looking down on the pub from the street opposite, also shows signage but this time for Breeds Brewery. The name of the licensee R W Grace is also visible. According to the Hastings Licensees Register, Robert Grace was joint landlord with Sydney Apps from 1916–1919 and sole landlord from 1919–1922. 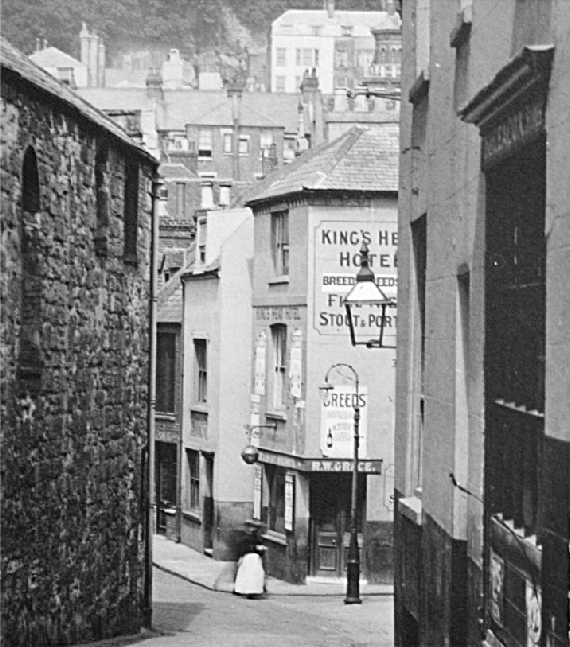 The freehold of the Kings Head was purchased by Breeds in 1923 who rented it out for £50 a year, the second highest rent of any Breeds pub in Hastings. This perhaps indicated a higher than average status and above average beer sales. In 1928, for example, when the pub was tied to the St Leonards Brewery, it sold a handsome 270 barrels. Breeds Brewery dates from 1802 and became a limited Company by 1897. As part of the Breeds estate the Kings Head was sold to the George, Beer and Rigden Brewery of Faversham, Kent in 1931. George, Beer and Rigden were themselves taken over by Fremlins Brewery of Maidstone in 1949 and by Whitbreads in 1972.

In the first half of the 19th century the pub organized ‘Settling Dinners’. Glowing newspaper reports from the early 1800s describe the customers of Ransom and Ridley’s shipyard attending Settling Dinners to settle their business accounts amid ‘great conviviality’ at the Kings Head. Henry Bean was landlord from 1826 when a farm and yard to the north of the pub apparently existed from 1800. ‘Harmonic Evenings’ ie community singing, were popular events as were meetings of the Friendly Societies. The Hastings and St Leonards Benefit Society held its annual Easter anniversaries here in the 1830s. In 1837 for example, dinner was served to 300 members! Although this custom was shared with the Ship public house the Kings Head must have been very spacious at that time. 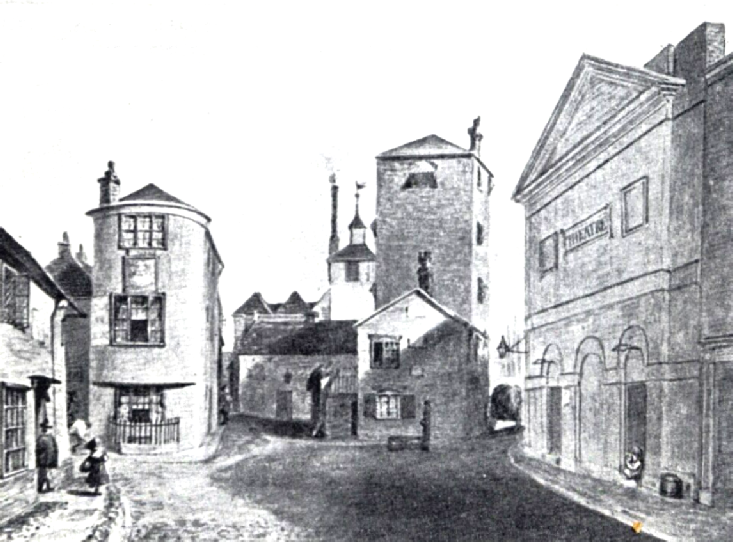 Looking up Bourne Street at the gaol and the stocks. The George (Kings Head) is left centre. Before 1825

In 1837 the pub was unkindly described as ‘near the goal in Court House Street’ when William Smith became landlord and held his opening dinner here after retiring as the driver of the Paragon Stage Coach to London for many years. But in the 1840s the pub started to go downhill. In 1839 the Sussex Express reported that one ‘Thomas Saddler was put in the stocks for four hours for committing a violent assault on Mr Smith landlord of the Kings Head’.

The pub’s customer base grew in the first half of the 19th century. It drew custom from singers, theatre goers, ship builders, farmers, Whigs (Liberals), Friendly Society members, coal merchants, ship owners, passenger coach and mail coach operators and almost certainly prison warders. Added to which the general public came to jeer at prisoners held in the stocks particularly at closing time.

For a brief period during the parliamentary election of 1835 the Whig candidate Howard Elphinstone used the pub as an election headquarters. After his election as MP for Hastings he hosted a victory dinner for 120 voters at the Kings Head. 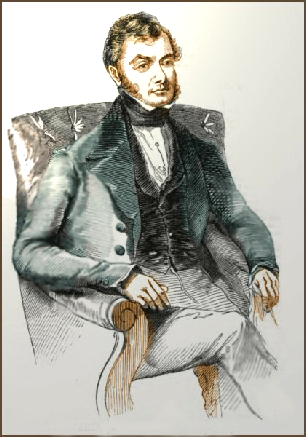 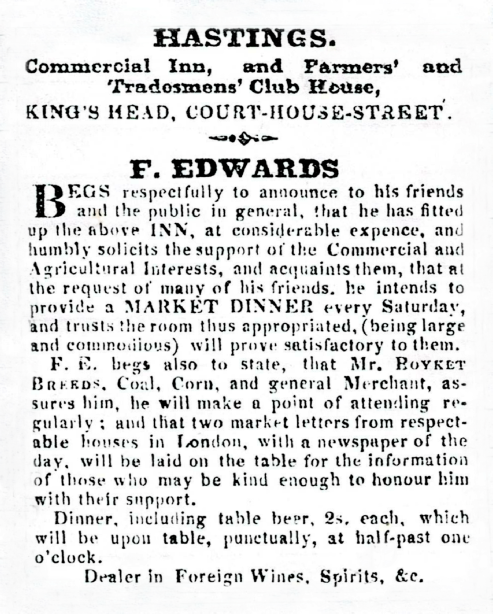 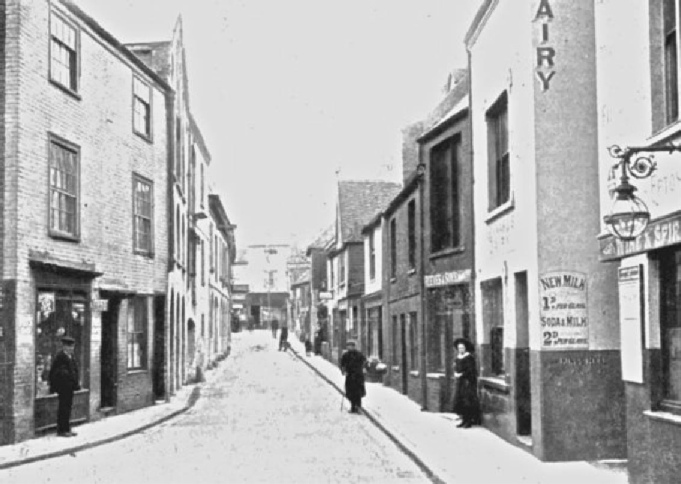 The anniversary of this Society fell on Monday last, and early in the morning the members assembled at the Kings Head Inn, whence, headed by their Stewards, and the Hastings band of music, and banners having appropriate mottos, proceeded to All Saint’s Church, where an excellent discourse was preached by the Rev H Foryster.

Divine service being concluded, the members paraded the town in procession, and at two o’clock returned to dinner at the King’s Head, the Mayor presiding…...Portions of the Society dined at the Ship, and the George. On the removal of the cloth at the Kings Head a toast was drunk 3 times 3, after which ‘the health of the Honorary Members’, was proposed.
Mr North, as the oldest honorary member present, returned thanks, and expressed the great pleasure he felt in being among them. He thanked them for himself and the honorary members present, and was sure he spoke their sentiments, when he said that it always afforded them gratification to be present and assist at their meetings. They were much pleased to find that their funds and their respectability increased from year to year, Notwithstanding the great increase in the numbers, it appeared that they had a large fund in hand. This fact reflected great credit upon the Society and in the Town, because it showed that the principle on which it was established was one of justice, and gave a stamp and character to the industrious classes of the town in which they were assembled. He hoped – nay, he felt assured, that they would continue to increase as the years rolled over them, and they would ever be as they now were, a pride and an honour to Hastings. He begged to give ‘the health of the Chairman’, and ‘Success to the Hastings Friendly Society’.

In 1854 the landlord was fined for illegally supplying spirits to beer houses and in 1859 he was punished again this time for allowing bagatelle to be played and for allowing ‘tossing for pots’ a means of deciding who paid for the drinks! In 1856 it was reported that ‘the smallest man in the world’ was on show at the Kings Head, for a small charge.

But this attraction paled into insignificance when the peace of Hastings was suddenly thrown into a state of painful excitement when the Hastings gaol keeper was murdered by a prisoner. At about 7 am one morning, in March 1856, those living next to the Kings Arms were distracted by loud cries of “help” and “police”, coming from the gaol and from the bedroom windows of the Kings Head. Several people rushed to the pub to be told by the landlord that a prisoner had just made his escape over the prison wall. “My wife heard a scream”, he said, “ran to the window and started screaming herself”. When the prisoner was recaptured, Hastings followed the subsequent trial with great interest. The murderer was found guilty and 'hung by the neck until dead' in Lewes gaol. The hanging was observed by 1,000 people and became a major topic of conversation in the bars of the Kings Head. In 1867 a horse dealer was reprimanded for calling a woman customer ‘a navy nance’ ie a labourers girlfriend.

In 1853 the last stocks for punishing minor offenders were removed from their site outside the front door. 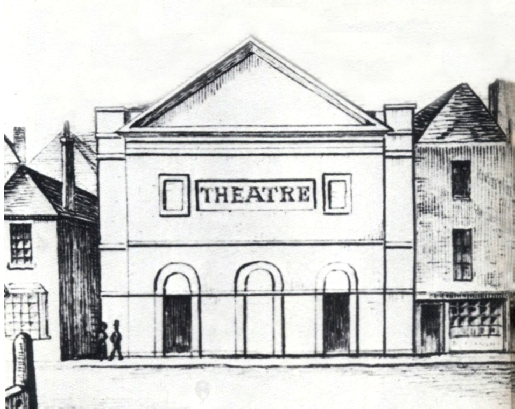 The drawing is of the old Hastings theatre which opened in 1827. The stocks and lock up are shown on the left. The theatre was converted into a chapel by the Wesleyans in 1835. The change drew the comment that it was a disgrace to the town that so fine a building should be sold so cheap for a Methodist Chapel. The building survived until 1939 when it was demolished and replaced by a brick neo-Georgian chapel. 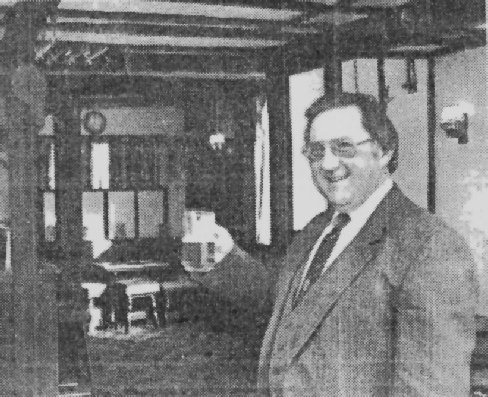 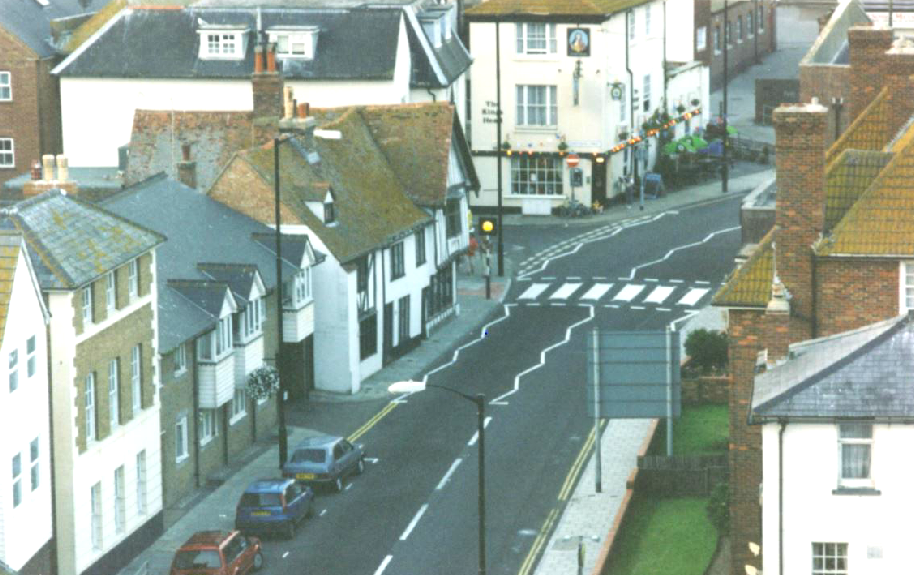 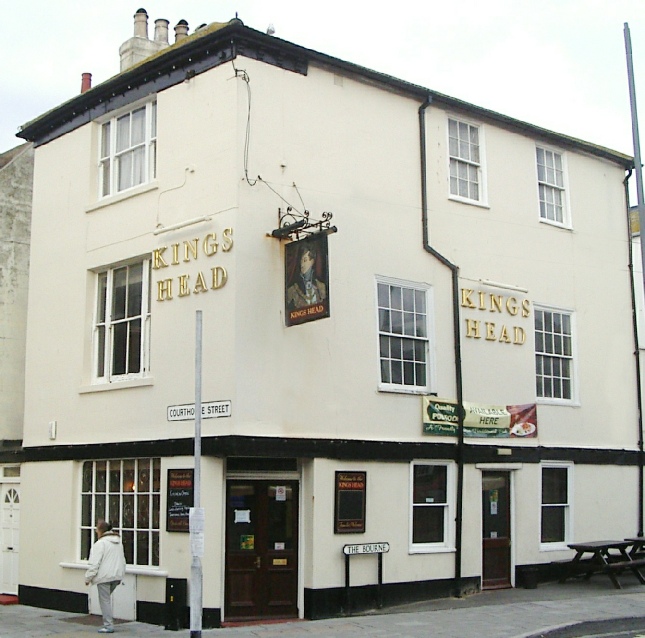 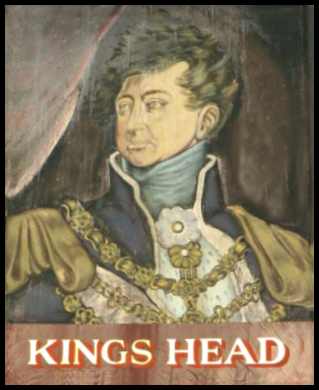