The Carlisle began life as a house on the shore, probably built in the 1700s. In 1825 the owner, Richard Chandler, built a tavern next door called the Pelham Arms. In the late 1850s the original house was said to be in poor condition, although by this time it was described as an inn, so there were probably rooms to rent. The inn was run by Chandler’s son, Richard Chandler the Younger, and was located next to a boat hull on America Ground, an area of marsh land given up by the receding sea. The Pelham Arms remained in the Chandler family until 1864 and was a meeting place for early rowing clubs and licensed watermen. Live music was played here in the 1840s and by the 1880s it was known as a Liberal house.

In 1873 the original house was demolished and the land it stood on was occupied by an extension. In 1892 the extension was enlarged and the pub became the Carlisle Hotel, probably after Carlisle Villas that stood behind the pub, blocking its view of the sea. 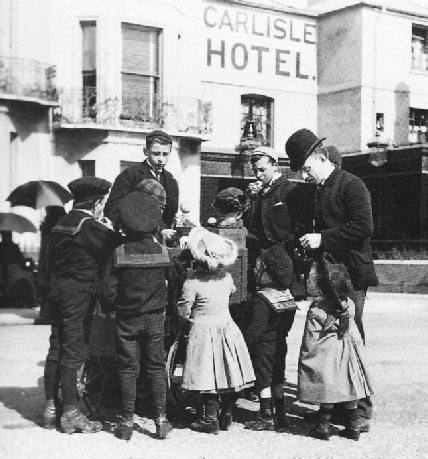 From 1890–1894 the landlord was Thomas Brown, a county cricketer and straw-hat manufacturer. On the road to bankruptcy, he ignored all the signs and continued to take money out of the till, played cricket for Sussex ‘a few times’ and gambled a little on the side. In 1894 he became bankrupt.

In 1899 the pub was taken over by Earnest Chase, whose time here proved to be even shorter than Brown’s and he too became bankrupt within 18 months. However, during this time he organized and founded the Carlisle Cup, which was presented annually to local footballers. 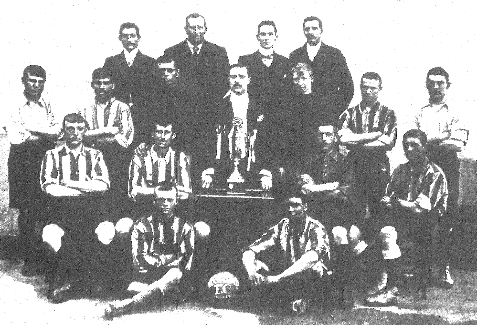 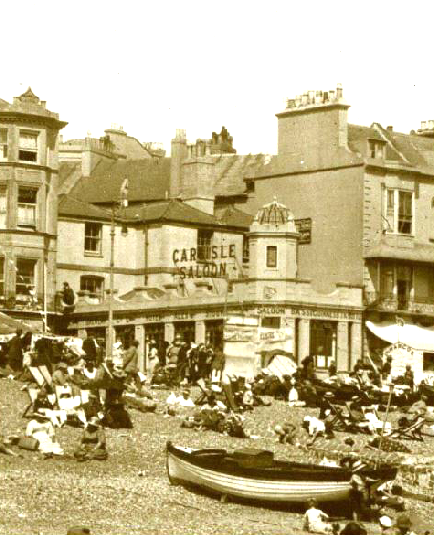 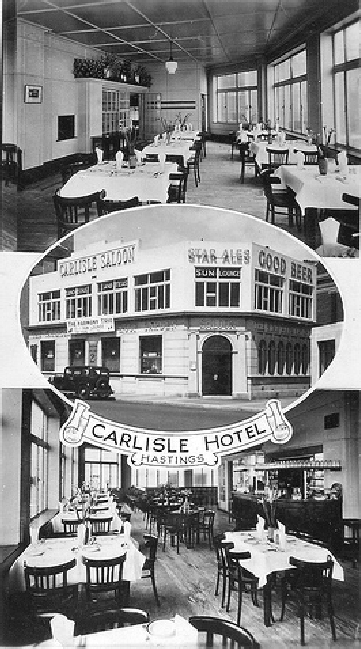 During the inter-war years, the pub grew in success and in 1920 a ground floor extension was built on the west side of the pub, on the site of its former beer garden. It was designed by radical architect Andrew Ford of the Star Brewery, Eastbourne, in the Modernist style, using a lot of glass, steel and reinforced concrete, in contrast to Mock Tudor. The extension ran alongside Carlisle Villas, and, for the first time, part of the pub faced the sea. In those days there was no proper sea front road at that point. It was little more than a footpath.

In 1930 a new road and sea wall was planned but Carlisle Villas and the 1920 extension were in the way. Following the purchase of part of the Carlisle for £2,500, Carlisle Villas and the extension were demolished and the Star Brewery, who owned the pub, extended the ground floor into its current shape. The two poles visible inside the pub helps support the upper part of the building.

By 1934 the function room and a rooftop beer garden had been added but this became a problem due to customers spilling beer on to passers-by and sometimes dropping glasses as well. The pub was altered again in 1938 to get rid of some of the internal walls and from then on it was more or less as we know it.

As the ‘Carlisle Saloon’ it became a major venue for some of the town’s annual billiards, snooker and darts tournaments. In 1938 it staged the first ladies’ snooker match to be played in public in Hastings, between N Lawrence and T Kirkpatrick. 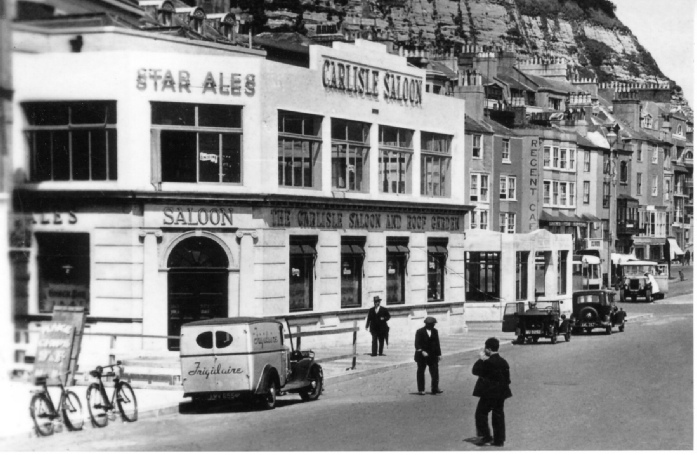 Carlisle in the 1930s, with roof garden and public shelter (right)  Hodges

The Carlisle closed during the war and may have been used as a uniform store for troops billeted in the town, but there is no evidence that guns were ever placed on the roof. The pub was surrounded by taller buildings at the time so they would have had a limited field of fire. They would also have torn the pub apart unless they were short range weapons. Unlike some of its neighbours and Pelham Street’s other pub, the Denmark Arms, the Carlisle survived the war, although it sustained some damage.

It reopened in May 1945 when it was one of only two local pubs with a music licence. The Debonair’s Dance Band played here in the evenings and by the 1950s Carlisle Parade, then known as Teddy Boys’ Walk, was the scene of clashes between ‘Teds’ and soldiers from Lydd  Army Camp. One popular Ted known as the Lemon Drop Kid, used to sing Buddy Holly numbers and the pub hosted a Teddy Girl disc jockey called Bebopa Lula.

By the 1960s the lounge had become the Ocean Bar, hosting the Commanders Show Band. From then on it attracted different youth cultures including, Rockers, Greasers and Hell’s Angels.

On Easter Monday 1981 the pub was attacked by a rampaging group of skinheads. The police were called and herded the crowd up Bohemia road to the Oval where they made 18 arrests.

From 1983 to 1986 the licence was held by Tony Shipley, who also ran the Lord Nelson. When he took over the Carlisle a number of bikers, customers of the Lord Nelson, followed him, which from then on gradually became a haunt of bikers from all over the country. 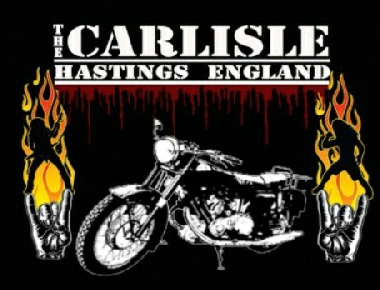 Between 1987 and 1990 the Carlisle was licensed to Julian Deeprose and Mike Ford. “Mike Ford and I took over the Carlisle in 1987”, said Julian, “after it had been run into the ground by an ex-Hong Kong policeman and closed for six months. He was banning people for wearing leather jackets and denims. He was known to the locals as ‘Stiff’ but for the life of me I cannot remember his real name.”

Their worst moment was in 1989 when the leader of a Birmingham motor cycle gang, the ‘Cycle Tramps’, was shot dead outside the pub by a member of the rival ‘London Road Rats’. This was unexpected. “Among the motorcycle chapters”, according to Julian, “Hastings was considered to be neutral territory, so there was never any inter-club trouble. The murder violated that agreement and we feared reprisals, but fortunately they never happened, at least not in the Carlisle.” 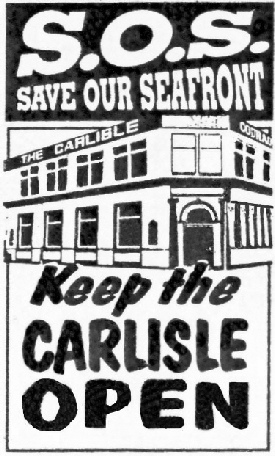 In 1992 Hastings Borough Council, who are the freeholders, threatened to close the pub down. A campaign was launched in its support and 12,000 people signed a petition. At one point ‘thought waves’ were sent out by the high priest and priestess of British white witches, Kevin and Ingrid Carlyon, in an attempt to cleanse the mind of the town council and persuade it to leave the Carlisle alone. It was proposed to burn an old motor bike with an effigy of the council leader, below the high tide mark on the beach. At a crowded council meeting, Gus Cummins, a local artist, said that “the Carlisle was unique to the town and had a colourful and diverse clientele”. Finally, in 1994, the council decided the pub would stay open.

On May 1st every year thousands of bikers ride into town on the ‘Hastings Run’ and the Carlisle is the hub of the day’s activity.

There is some irony in the fact that the pub is named after the Crown Agent who evicted the original inhabitants of America Ground in 1835, when today’s customers are the true inheritors of the spirit of those times. 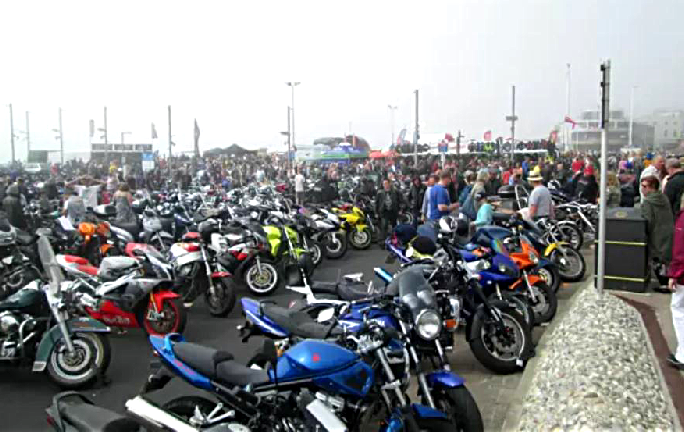 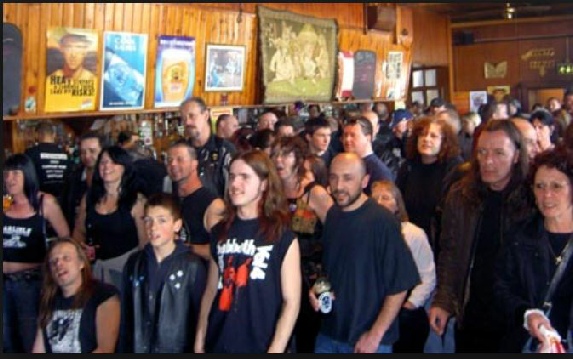 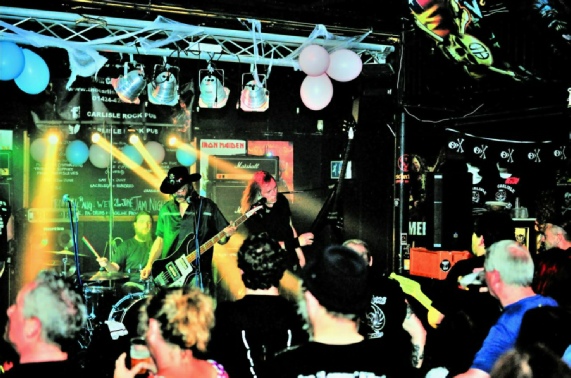 Gigs at the Carlisle 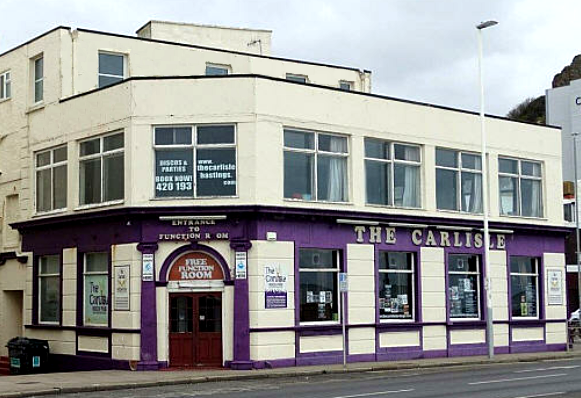 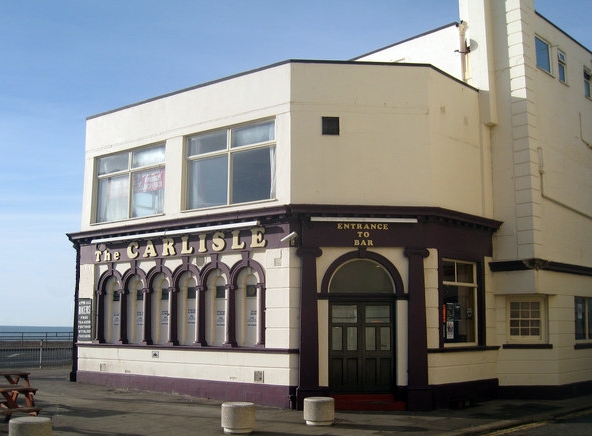 Carlisle from the east  Russell 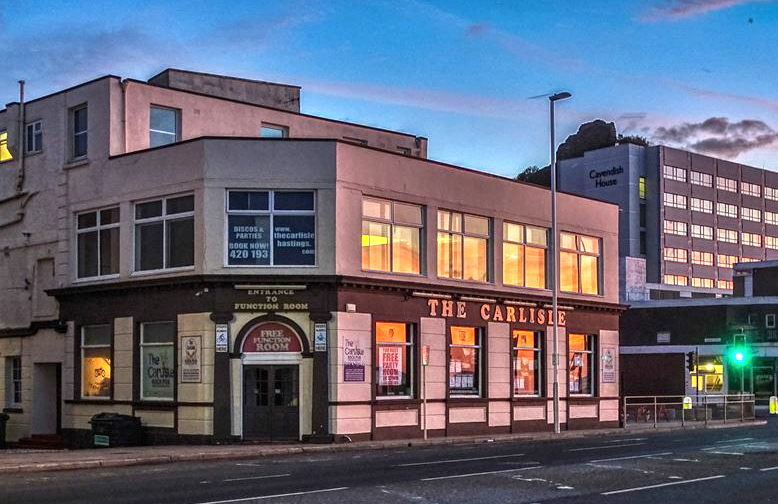 The Carlisle at dawn 2018 Brian Bailey

Much of the material for the Carlisle has been taken from the research by the late Terry Huggins. 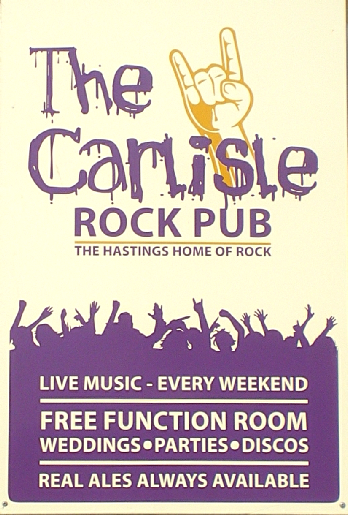