The Cinque Ports Arms is possibly Hastings oldest pub but without further evidence we cannot be certain. A pub known as the Chequer existed on this site in 1642 when one ‘Richard Tester paid a quitrent of 2/6d to the Manor of Brede for it’. A century later it had become the Old Chequer described as a ‘tenement block with a dubious status attached to an equally dubious brewery’.

The name Chequer originated in ancient Rome where it indicated that a bar also provided banking services. The chequer board was used as an aid to counting money and is the origin of the word exchequer. A suspended chequer board was often used as a sign advertising money lending and was common in seaport towns. Today, although the upstairs Chequers Bar in the Cinque Ports Arms is a reminder of those earlier times, we can only imagine the possible affluence and prosperity surrounding the Chequer 300 to 400 years ago.

The first mention of the pub as the Cinque Ports Arms was in 1820 when William  Wood, an innkeeper, paid £260 for it. Since then the fortunes of the pub have ebbed and flowed across the years following the changing social fabric of the Old Town itself. By the 19th century the Old Town had become a deprived area, home to large numbers of pubs and lodging houses. Several pubs provided cheap accommodation for tramping tradesmen, fishermen, hawkers, itinerants, and others. They were designated as ‘Common Lodging Houses’ and some of them were licensed to sell beer.

As licensed premises, they had a bar, or bars, attached and between 1830 and 1869 any ratepayer could bypass the local magistrates by purchasing a beer licence for two guineas from the Excise. In 1850, local authorities were obliged to permit a survey of drains and sewers because of concern about a national outbreak of cholera in 1849. The survey mentions the Cinque Ports Arms, the Crown Inn, the Lord Nelson, the Merry Christmas and other licensed premises. In that year Hastings recorded at least 65 deaths from cholera and many more were unregistered. Local government was forced to make the connection between the unsanitary environment, bad public health and an average life span of only 31 years. In short an unwelcome image.

A major concern was drinking water. Those who were licensed to sell beer were in a much better position than those who weren’t. Beer was obviously a healthier and safer drink and this is why there were numerous beer houses in the Old Town in the 19th century.

By 1850 this fairly large pub had a bar, tap room, three parlours and a ‘common lodging house’ in an annex at the rear. The annex, recorded at 10a Bourne Walk, was run by Ann Holt who paid the landlord 12s [60p] a week for it. Four beds were let to eight men at 2s [10p] a week each. Auctions were held in the annex into the 1870s. It was also at various times used as a brewery, a skittle alley and a laundry. 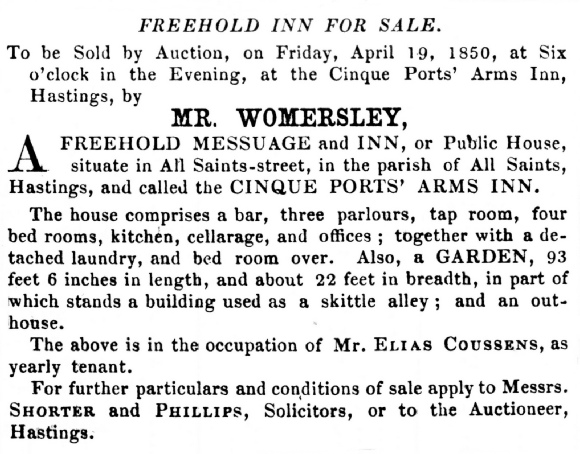 However, by 1905 the pub was still feeling the pinch of poverty and was only open part-time. The landlord was forced to work as a hawker during the daytime.

This painting by Leslie Badham is dated 1924. It is the only image of the old pub before it was damaged extensively by fire in 1925. 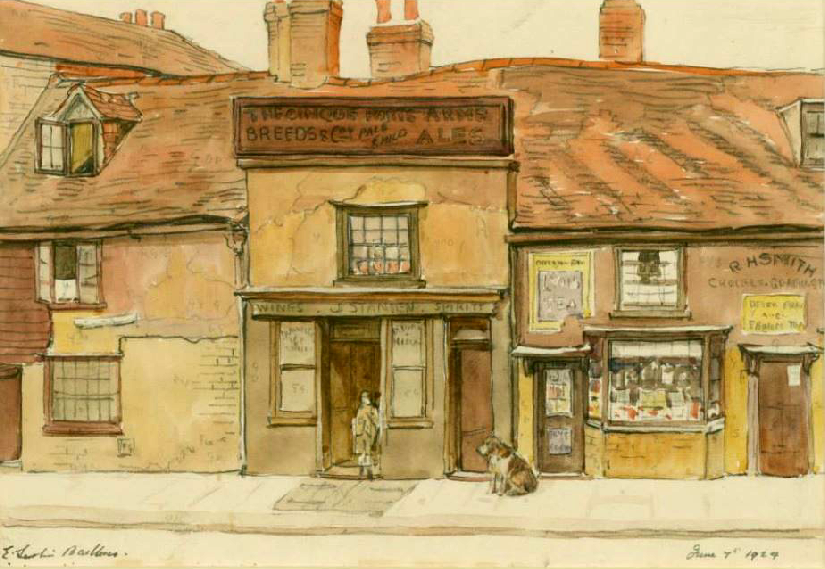 The Cinque Ports Arms was originally tied to St Leonards Brewery which went into liquidation in 1907. The pub was  then leased to Breeds Brewery who acquired the freehold in 1931 before selling up to George, Beer and Rigden of Faversham. In 1949 the pub became tied to Fremlins and in 1967 to Whitbreads.

Becoming tied to Breeds was a turning point in the fortunes of the pub which was, after poverty, cholera, fire and bankruptcy, rebuilt in the Mock Tudor style in 1931. In 1932 the former annex was sold to Hastings Housing Committee for £50.

Mock Tudor first appeared in domestic architecture in the early 20th century and was based on a revival of certain aspects of Tudor architecture, particularly white plaster and black painted timbers. Dubbed ‘Brewers Tudor’ it was popular with brewers and contrasted strongly with the 1930s modernist style of architecture  which used a lot of reinforced concrete and glass. (See the Carlisle for example.)

However, not everyone appreciated the new style pub:

Where young men talk of sport and cars
In various bogus-Tudor bars
And daren’t look up and see the stars’.

The pub takes its name from the Cinque Ports Federation, a unique association of coastal towns and villages in East Sussex and Kent dating back perhaps 800 years. In the centuries before England had a navy, the original Cinque Ports (or five ports) of Hastings, Hythe, Romney, Dover and Sandwich, provided the government with ships and men to help England meet its military and naval needs. This service was last called upon in 1588 to oppose the Spanish Armada, and again in 1596.

The five ports were supported by the two ‘antient towns’ of Rye and Winchelsea and by several other towns known as ‘limbs’. The latter included Llydd, Folkstone, Faversham, Margate, Deal, Ramsgate, Brightlingsea and Tenterden. 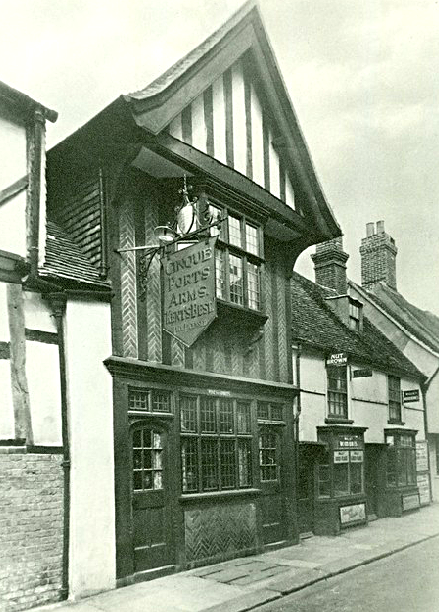 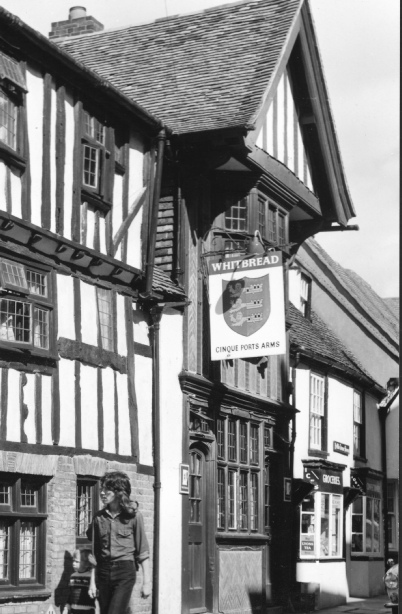 Because of its architecture the pub has become one of the most photographed local pubs. In recent decades the middle classes have flocked into the area and values have increased. Ironically because of this, the Cinque Ports Arms was threatened with closure in 1989 when the brewery recognized its residential value. However, it didn’t close and remains open.

For many hundreds of years the Cinque Ports Federation has had its own coat of arms. Early common seals suggest that the design of three lions ‘passant guardant’ (full face), with one paw raised, attached to three ships’ hulls, came into use between 1194 and 1305. The arms are derived from the golden lions used on the arms of England, except that the lions are joined with ships’ hulls, to denote the provision of ships and men. Not surprisingly the towns in the Federation have, or had, a pub called the Cinque Ports Arms with the same or similar sign.

The arms of the town of Hastings on the other hand, differ in that they have only two lions attached to ships’ hulls. The third lion is complete, which denotes Hastings as the chief Cinque Port. (See the Hastings Arms.) 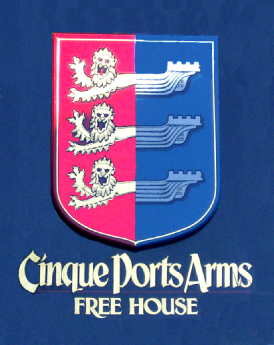 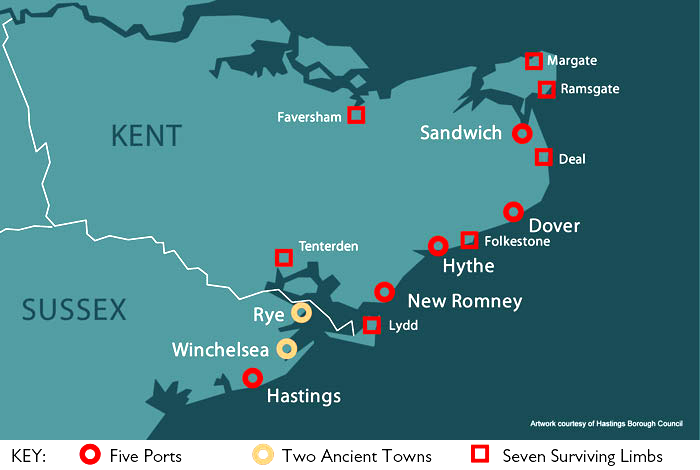 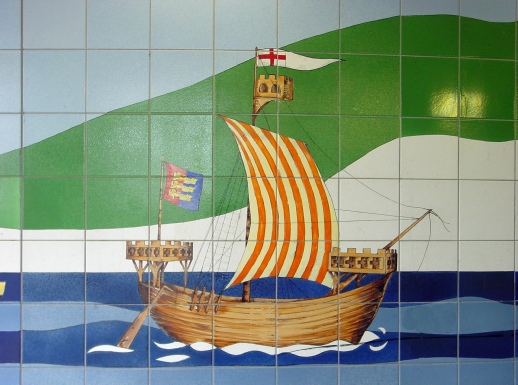 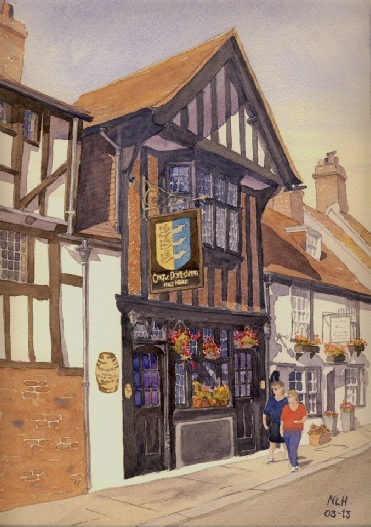 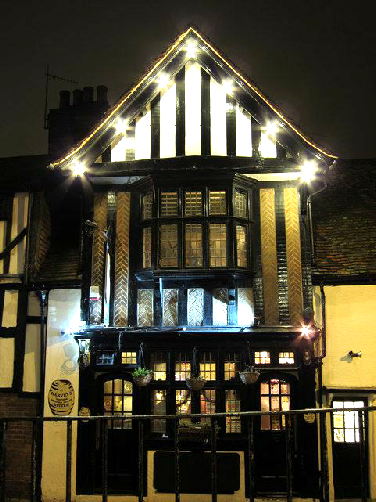 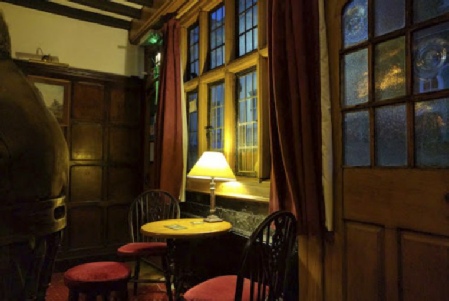 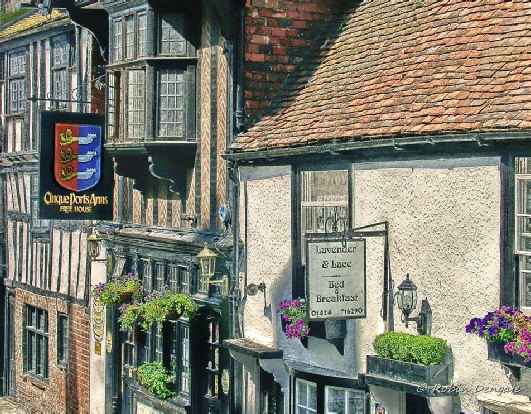