This building dates from the 1850s, when it was part of Queen’s Buildings. By 1866 it was known as the ‘Wine and Beer Stores, formerly of George Street’ and was granted a spirit licence in the same year before becoming the London Stores and Oyster Luncheon Bar. Advertisements from that time list draught wines and several different cordials described as ‘strong, sweetened, aromatic, alcoholic liquors’. They include Cloves, Mint, Shrub, Noyeau, Raspberry, Dantzic Spruce and Doctor.

In one of several cases involving prostitutes and following a visit by the police, the landlord was charged with ‘unlawfully and knowingly permitting and suffering divers persons of a notorious bad character to assemble in his house against the tenor of his license’. The police found what they described as a ‘mare’s nest’ inside the pub, accompanied by ‘a great noise, caused by female voices’. In his defence, the landlord said he was busy serving the employees of Manger’s Menagerie, who were pulling down a marquee on the Central Cricket Ground behind the pub, and did not notice the women in the bar. He was fined £1 and asked the magistrate how he should deal with men from the cricket ground when they came into the pub to meet women. The magistrate’s sexist response was a typical example of the double standards of Victorian morality; he simply said the charge did not apply to men at all.

The London Stores and Oyster Luncheon Bar became the Central Hotel in 1875  after the adjacent Central Cricket Ground narrowly escaped demolition in the late 1870s to make way for the town hall built next door in 1881. An entry in the Hastings Directory for 1878 advertises the Central as a pub with ‘a Museum of Aboriginal Curiosities’, probably a collection of cultural items acquired from visiting Aboriginal cricket teams who played matches on the Central ground and gave displays of boomerang throwing and whip cracking to the large crowds. (See the General Havelock).

During these years the Central was also the headquarters of the Borough Bonfire Boys Society, one of at least four bonfire societies in 19th century Hastings. Large numbers of bonfire boys (up to 120) held their suppers and meetings in the Central  but by 1887 they had moved to the Red Lion in Stone Street. Henry Link, late landlord of the Central, was treasurer of the society for eight years and was awarded a ‘Handsomely Framed Illuminated Address’ by them in 1887. The society was still based at the Red Lion in 1890. 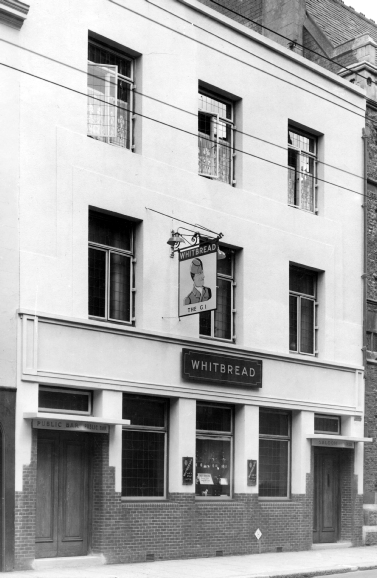 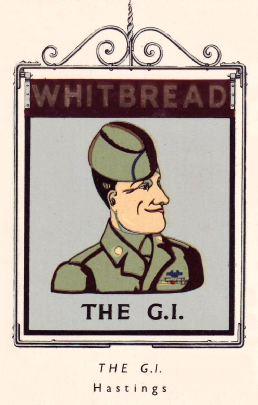 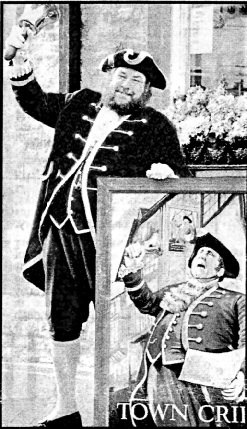 in the 1990s this elegant Victorian pub was gutted and ‘remodelled’. In 1996 it was renamed again as Pitcher’s Sports Bar and Diner. Ray Goode, Hastings’s town crier at the time and also one time national champion was presented with the old pub sign, which indeed was a portrait of himself. More recently it became Bar Moda, its seventh name change in over 150 years. It is now simply called Moda. 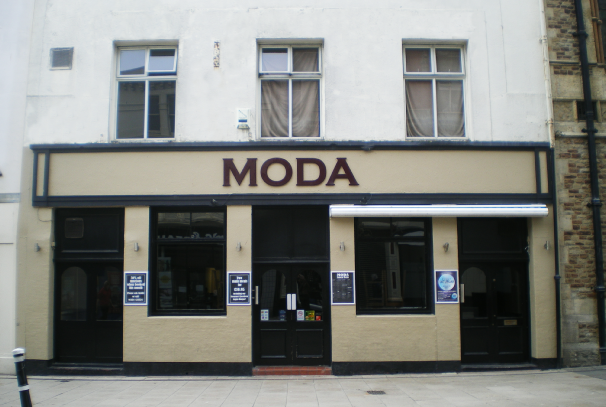 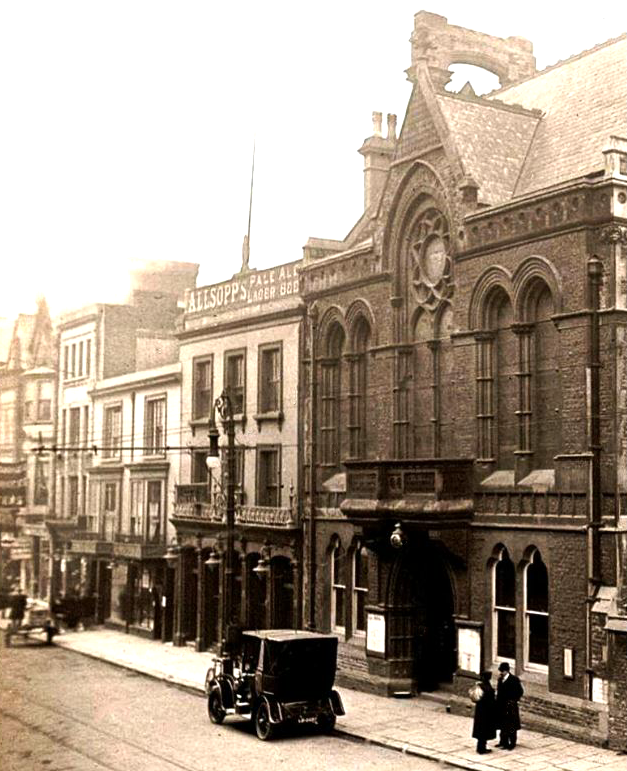 Moda as the Central Hotel, next to the Town Hall

In the years after World War One the ground floor of the Central was dominated by a large circular counter serving all the main bars and four or five cubicles. These cubicles were popular with customers from the town hall and anyone who wanted some privacy. A heavy velvet curtain had to be pulled aside to enter a cubicle. The cubicles were removed in the late 1930s by Leneys Brewery during alterations.

In World War Two From 1942 to 1945 the Central was one town centre pub used by American troops billeted locally. The late Charles Banks, then Police Inspector Banks, remembered that: “On the whole they were well behaved, but there were quarrels at times with Canadian and British troops, mainly caused by the high rates of American pay”.

Tommy Read son of the landlord at that time recalls the American troops but has a clearer memory of the Canadian customers. “He recalled that: “you had to keep a close eye on them as they might nick everything. During the war years the beer was rationed and we often ran out. My father would put a notice on the door ‘No Beer’. But the brewery expected us to keep open for tea and coffee. I was often sent to the Clock House off-licence in Queens Road for illicit supplies of Guinness. When the brewery found out they refused to allow my father to continue as landlord and in 1943 we had to move out!”

In December 1945 the pub was renamed once more as the G.I. commemorating the war time patronage of the pub by American troops. Before the war, the American military had been told that they would be welcome in British pubs, if they remembered that the pub, generally, was a working man’s place, where men come to meet their friends, not strangers.  But after the war, Norman Longmate, in his book The GIs writes: ‘The final proof that the pub, the most English of institutions had taken the American serviceman to its heart came, when the Central Hotel, Hastings was renamed the G.I.’

At the renaming ceremony, Sergeant William Hastings of Texas, who had married a bride from Hastings, unfurled the new pub sign. He was presented with a silver tankard and many local, county, army and US dignitaries made speeches. The name G.I. put the pub into the Guinness Book of Records, as the shortest pub name in the country and also into Whitbread’s miniature inn signs series, published in the 1950s.

Has been favoured with Instructions from the Freeholder to SELL BY AUCTION, on the Premises as above, on MONDAY, OCTOBER 7TH, 1889, at Three for Four o’clock in the Afternoon, of that Valuable FREEHOLD PROPERTY, known as the CENTRAL HOTEL, QUEEN’S ROAD, HASTINGS, adjoining the new Town Hall, immediately opposite the Gaiety Theatre, and close to the principle entrance to the Cricket and Recreation Ground. The accommodation is as follows:-
BASEMENT.―Capital cellars.
GROUND FLOOR.―Handsome frontage of 24 feet to Queen’s-road, with three entrances to the extensive bar, fitted with partitions forming two large public bars and one private bar, large smoking room, or restaurant, at the back, and private sitting-room, store cupboards at back, good entrance from Station-road, well-fitted urinal and w.c., Spacious entrance hall and passage leading to staircase.
FIRST FLOOR.―Large dining hall extending the whole frontage suitable for meetings, sales by auction, concerts, dancing, etc., large billiard room, and store room.
SECOND FLOOR.―Extensive landing, large kitchen, private sitting room, and five good bedrooms. A fairly good business is being done at the present time, under management. The premises were formerly in the occupation of Mr. Lamb, who for many years carried on a very extensive business. His lease having expired, the freeholder has made many alterations and improvements in the premises, and has expended a large sum of money in making the place suitable for carrying on a very large bar trade of beers, wines, spirits, etc., also catering for dinner parties, beanfeasts, smoking concerts etc.
The situation is one of the very best in the borough being next to the New Town Hall, which adjoins the Cricket and Recreation Ground. There is no doubt that with zealous management, and by selling first-class Beers, Wines, Spirits, etc., the business would be one of the most lucrative in the borough.
The fixtures, fittings, furniture, trade materials, etc., as per inventory, will have to be taken at valuation in the usual way.
Possession may be had on completion of the purchase.
Particulars and Conditions of Sale to be obtained of Messrs. Phillips and Cheeseman, solicitors, Havelock-road, Hastings on the premises or at the Offices of the Auctioneer, 40 Havelock-road, Hastings, who will also give orders to View.

But this was not to be the pub’s final name. In 1962 it changed once more to New Central and in 1979 it became the Town Crier. 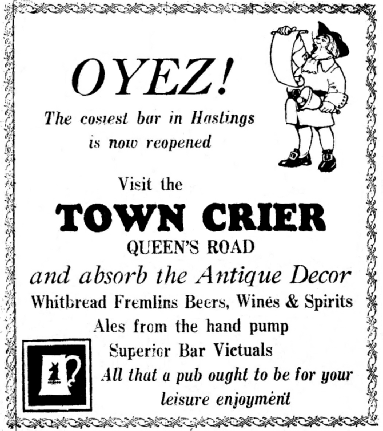 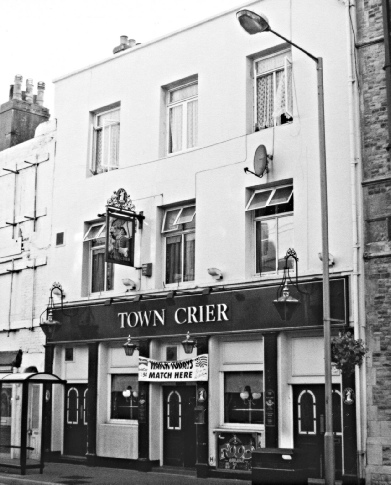 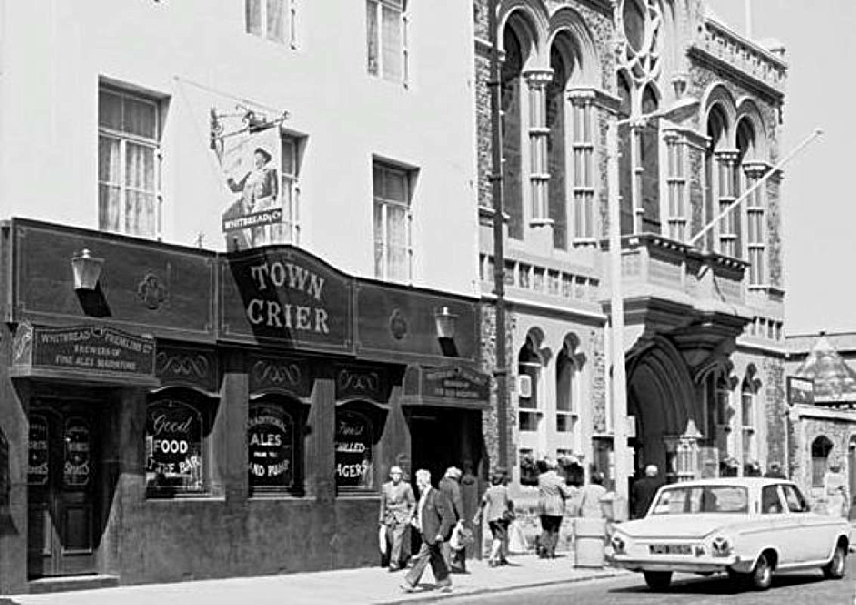 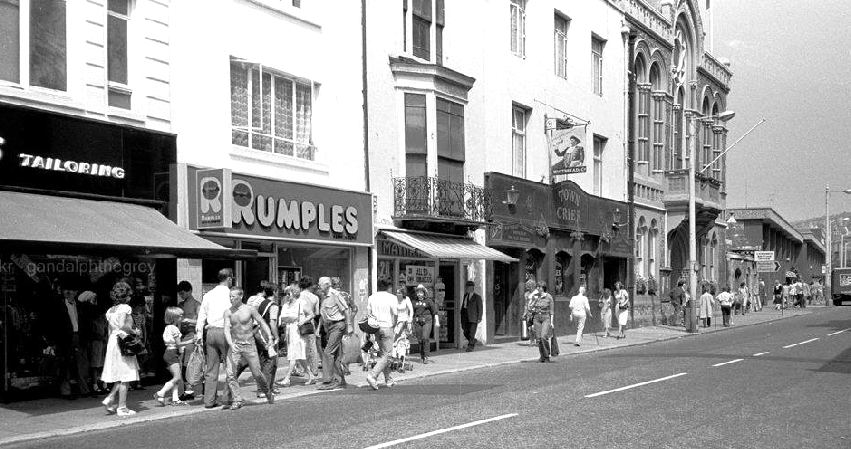 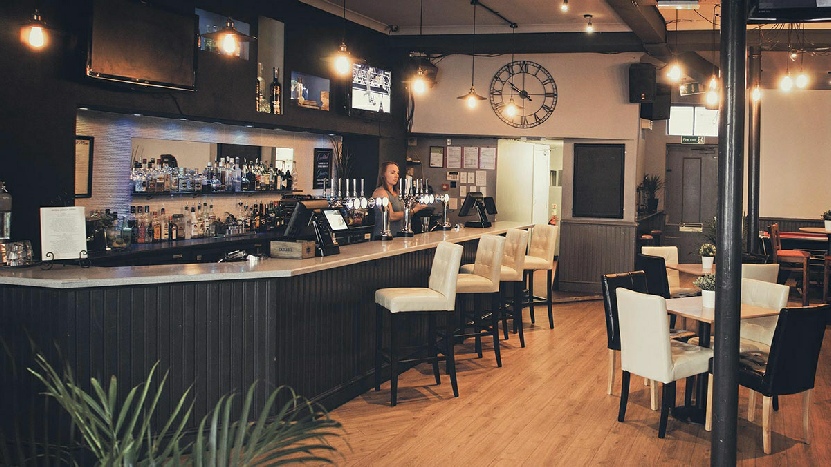 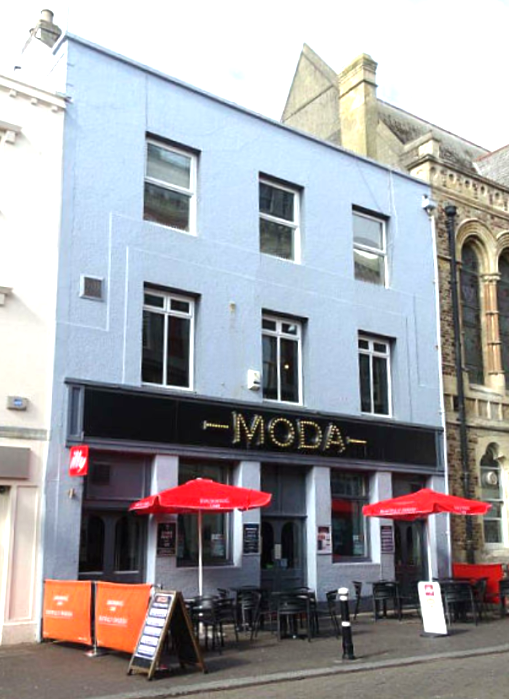