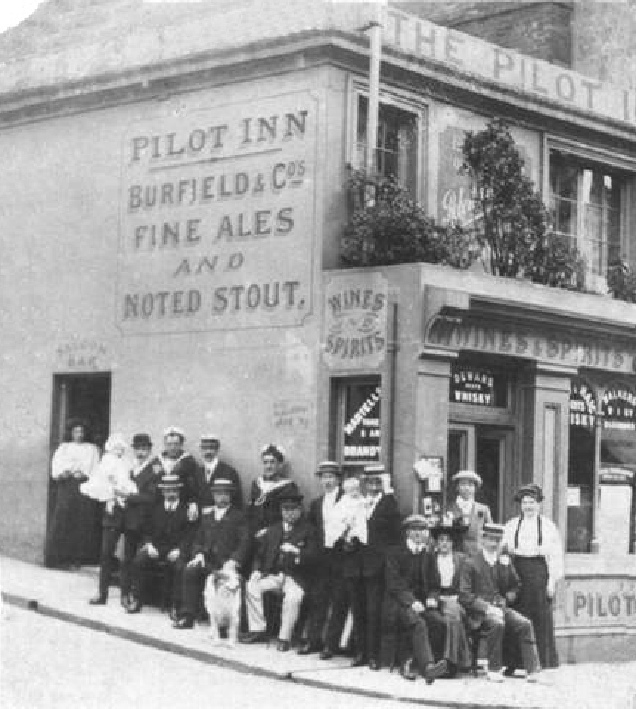 The Pilot was opened in 1834 by a sail maker and former letter carrier called William Nabbs. He was first employed by the post office in the High Street at the age of 12 or 13, and later apprenticed as a sail maker to Messrs. Winter and Thwaites who built fast sailing cutters in their shipyard on Hastings beach. In 1824 he married Sarah Gallop and took up residence in Rope Walk, America Ground, which was the centre of rope making and sail making in Hastings. He later set up as a sail maker in John Street.

The Nabbs were an historic Hastings family. William Nabbs’ father, also called William and also a sail maker, owned and captained a privateer licensed by the government to raid French boats in the 18th century. His in-laws were licensees of the Bo Peep in 1794.

The Pilot was one of a number of public houses built when the exodus from America Ground took place in 1835. Others included the Wheatsheaf in Bohemia, and the Angel and the Plough on West Hill.

The Pilot was also one of at least four Hastings’ pubs associated with early Liberal politics. Charles Bolingbroke, a political associate of Nabbs, undertook a similar role at the Red Lion up the road in Stone Street. Henry Morley, another radical politician, took the Angel on West Hill, and John Bean became landlord of the Kings Head. The large Nabbs family of 18 ran the Pilot until the 1840s, after which period they transferred to the Swan Shades in Swan Terrace.

The 1872 Licensing Act created some confusion for the Pilot.

THE Landlord of the Pilot Inn, seeing a man with clayey boots which looked as if they had traversed many a weary mile that morning, could not find it in his heart to refuse the man a glass of beer within closing hours on Sunday last. He therefore bade him drink and be gone; but while there two other men came in, equally as thirsty, but the landlord, not feeling they had the same claim upon his tap as the first arrival, declined to serve them with the much-thirsted-for refreshment. But so unkind are the gods – whether the constable acted on “information” received from a kindly neighbour, or whether that lynx-eyed constable could see round the corner we know not – Sergeant H. Wood, stepped in upon the scene. The landlord, not a bit dismayed, told him the circumstances of the case as he subsequently deposed to in the witness-box on Thursday; and with a courtesy and honesty that might have softened the heart of even a policeman, bade him do his duty. The magistrates held the offence to be proved, and fined defendant in the lowest penalty they could inflict—£1 and costs, the Mayor adding that the Bench were of opinion that Mr. Love broke the law in ignorance. This is the only salve that Mr. Love can apply to his wounded soul. In whatever light you view law it is a costly commodity. Here is Mr. Love, who has practised at the bar for eight years. Believing he has a right to assuage the thirst of a weary traveller, he draws him “a half-pint.” Thereupon he is called  upon to pay smartly for his consideration. Mr. Love will know in future that “ignorance is no excuse in law.” He had better lay out now a sovereign or two more upon copies of and comments on the Licensing Act, and stick them up in his bar. Whenever he is in doubt he can refer to them. He has paid once for his ignorance of the Act; see how many times he may then be called upon to pay for his acquaintance with it. If he can reconcile the conflicting decisions of the powers that be, and, say, after six months, hard study, honestly declare that he understands the law, he will have accomplished more than I should give mortal man credit of being able to do.

Between 1906 and 1928 the Pilot had 14 different landlords. However, it was doing a better trade than most other pubs in the area (e.g. Bedford, Imperial, Fountain, Palmerston, Red Lion and the Tiger). It was a free house before being taken over by the Kemptown Brewery of Brighton. It was granted a music, singing and dancing licence for wireless only, in 1927. But in 1934 the licensee, William Davey, died suddenly and his widow was affected by a clause in the brewery tenancy agreement which gave her only 14 days notice to quit the pub. The Magistrates Court declared that this was wrong and deleted the ‘unfair clause’.

Minnie Howlett and her husband were customers of the Pilot after the Second World War, when Stan and Dolly Barton ran it from 1948 to 1956. ‘The Pilot was a very popular public house’, she said. It had two bars ‘one up and one down because it was built on the slope of a hill’. (It was on the corner of Queens Road and Stone Street.) ‘It had stairs between the bars and sometimes when it was crowded we sat on the stairs at the back. It was always full of customers and my brother-in-law Chick Howlett played the piano there.’

In its final years the Pilot was well known for its cider, and in 1970 it was selling 700 pints of cider a week. It was possibly the only Hastings ‘cider house’ at that time. It closed in 1971 and is now an electrical appliance shop.

Another public house with a nautical name, the Privateer, was located in a nearby street. In the mid 19th century this popular pub had bonfire boys, ‘girls on the town’ and railway employees among its customers, and was noted for its involvement with the traditional Hastings Rock Fair then held annually on the White Rock.

In 1859, and again in 1861, landlord William Brett was cautioned for selling alcohol in a booth at the fair. He had been wrongly informed by the Excise that the fair was legal and that he could sell liquor, but was told by the police that this was an offence as the fair was ‘illegal’.

In June 1869 the pub changed hands and an inventory of furniture and effects was taken. The Privateer had a bar, a ‘Little Parlor’, (French spelling), and a smoking room. These later became the bar, saloon and lounge respectively. The inventory listed the following:

The most interesting item on the list is the ‘puff tube and darts’, an early form of modern darts almost certainly an attraction at the Hastings ‘Rock Fair’. A description of puff and dart is found in the book: Played at the Pub, by Arthur Taylor.

‘Puff and dart’, he says ‘was depicted in the 1870 edition of The Boys’ Own Book, subtitled A Complete Encyclopaedia of All the Diversions, Athletic, Scientific & Recreative of Boyhood & Youth. This reference describes puff and dart as an ‘old fashioned tavern game’, which has ‘lately found its way into private houses, where it enjoys a certain kind of popularity under the name “Drawing-room Archery”.'

The game was played with a brass tube and ‘needle-pointed’ darts, using a target consisting of concentric rings. 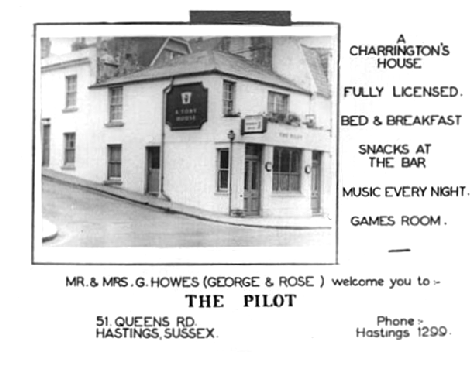 However, in her Glossary of Northamptonshire Words and Phrases, of 1854, Anne Elizabeth Baker described a target that appears to have been closer in design to the modern dartboard. Puff and dart, wrote Baker, was ‘a game played by puffing or blowing a dart through a long narrow tube, aiming to strike the numbers painted on a circular board hung against a wall: the various figures are arranged like those on the face of a clock. In 1868,’ she said, (only one year before the game was listed at the Privateer), ‘the catalogue of a games supplier called WH Cremer of New Bond Street, London, described puff and dart as, “An Old English game”.’

Arthur Taylor introduces some local, Sussex evidence: ‘A persuasive … piece of evidence that puff and dart provided a model for modern darts is this photograph of a tiny board (of perhaps seven inches in diameter), which appeared in The Countryman magazine in … 1947. Described as a board used for puff and dart in Sussex pubs  … in the 1880s, it is … immediately recognisable as an early version of the modern dart board.’

The Hastings Rock Fair came to an end in about 1860, although there were attempts to revive it outside the town boundary. (See Tivoli Tavern.) 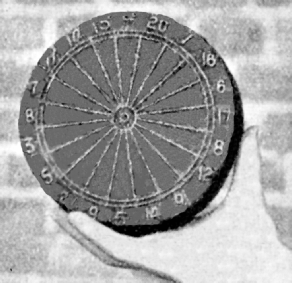 The Privateer continued until the First World War when, in 1917, it was closed temporarily by the Liquor Control Board presumably because it had allowed soldiers to get drunk.

It never reopened and the building became a private house, now also gone. All that remains is a sad and derelict open space in a Hastings back street. The Privateer, the Rock Fair and puff and dart have disappeared from local history. 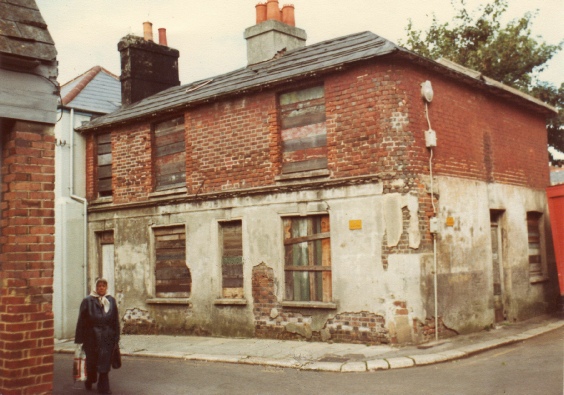 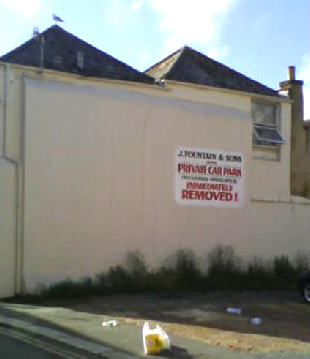 Empty site of the Privateer  Huggins 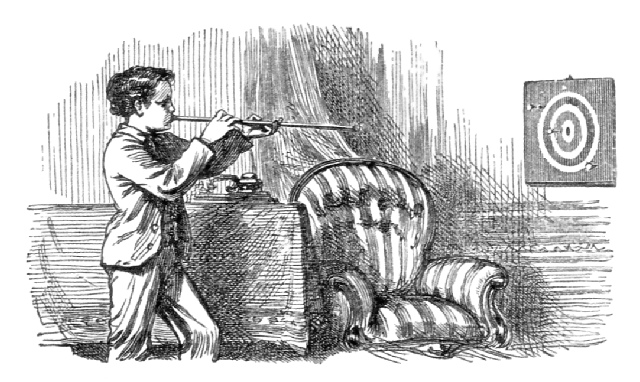