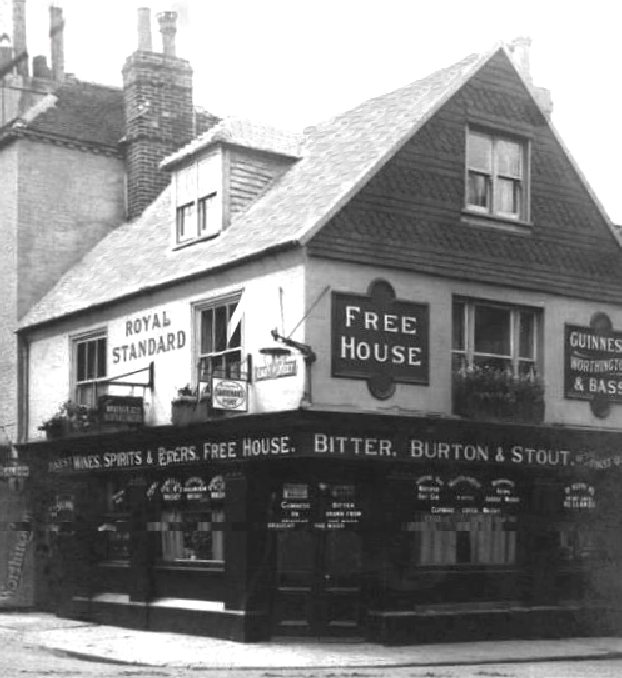 One hundred years ago the Royal Standard was a fishing pub opposite the Stade. Two hundred years ago the pub didn’t exist and the old Hastings Town Wall then ran along this part of East Beach Street. The deeds of this quaint building date from 1707 when a shoemaker lived here. It became a beerhouse in 1822 and in 1856 John Webb was granted a full licence. The magistrate was facetious: “You would rather sell spirits with a licence than without I suppose?” “Yes Sir”, he replied. 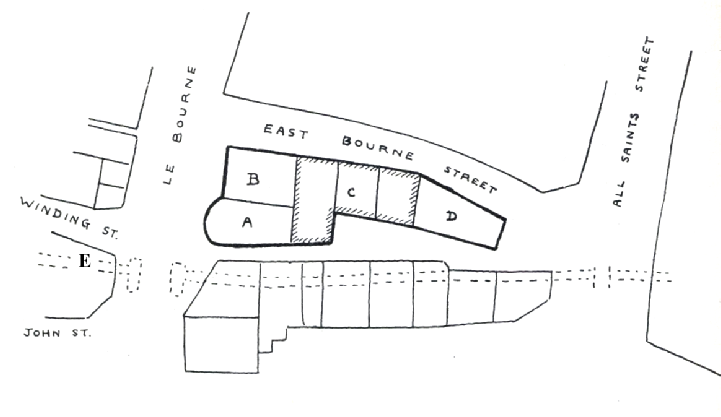 ‘E’ is the site of the Royal Standard. ‘A’ and ‘B’ are now demolished; ‘C’ to ‘D’ is the Lord Nelson. The dotted lines show the site of the Old Town Wall. The original drawing is by John Manwaring-Baines.

Today the continuation of this wall can be seen behind the Royal Standard pub. The end of the wall is still there, rendered over and just to the right of the Lord Nelson.

John Webb was a keen landlord and by 1858 he had acquired a lease to a part of the Stade, opposite the Royal Standard, where he owned a rope and net shop. This facility was for the use of customers loyal to the Royal Standard. This was a common practice among the fishing pubs. From the 1840s to the 1880s at least, beach leases were held by the Cutter, London Trader, Jolly Fisherman, Eagle and the Dolphin, among others.

In the 1880s, when Hastings pubs were feeling the effects of competition from grocers who had a licence to sell beer, the Royal Standard started selling tea and groceries. It became the distribution agent for all tea sold in Hastings’ pubs. This was helped, no doubt, by the system of allowances for fishing families (see below).

Before the First World War this part of Hastings was described as very ‘crowded when the boats come in’. The Royal Standard was one of the early morning pubs opening at 5 am for boat crews, ‘boys ashore’ (who were employed in the Net Huts), and fish buyers, who sheltered in the pub waiting for fishermen to call out ‘sole buyers’ or ‘cod buyers’. Other customers included boat skippers, mates and the sub coxswain of the lifeboat. Three boat crews and their ‘boys ashore’ had allowances in this pub. The allowance enabled them to drink on credit, until the skipper paid the bill on a ‘day of settlement’. Fishermen’s wives also had allowances, but with the butcher and the baker, who were paid in the same way. The Royal Standard, the Dolphin, the Lord Nelson and the Prince Albert were considered to be the authentic fishermen’s pubs according to witnesses at an appeal. Although there were of course several other pubs in the area used by fishermen.

At this appeal, in 1900, the fishing pubs lost their early morning licences on the basis that the fishing industry was in decline due to traditional sailing trawlers being out-classed by new steam trawlers. This meant less fishing and consequently less employment for fishermen. An early morning licence was again refused in 1915, when wartime restrictions on pub opening hours were imposed ‘to improve the war effort’. 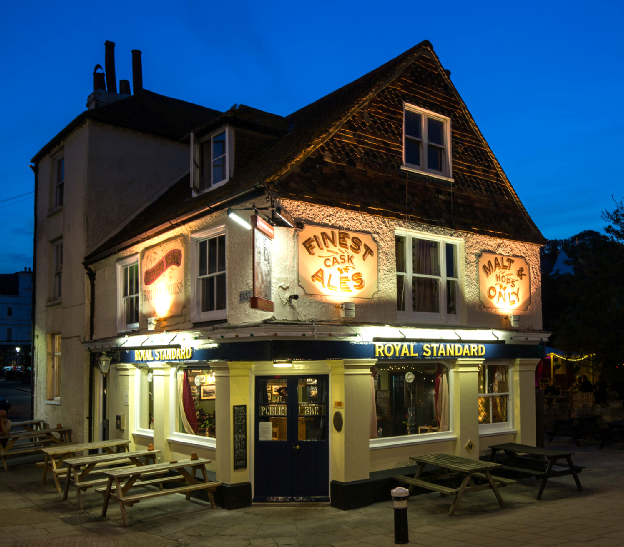 Nowadays the Royal Standard is the venue for the marble championships on Winkle Island on Good Friday which are organized by the Hastings Bonfire Society and is also popular with visitors to the Jack in the Green Festival on May Day. The festival is based on a tradition which started in the 1830s but died out at the start of the 20th century. Revived in 1983, it is now an annual event which welcomes the start of summer on the May Day Bank Holiday weekend and has become a tourist attraction. Jack is a ‘green man’, who represents the spirit of the forest. He is covered in branches and leaves and wears a crown and a green face. He leads a procession and is escorted by dancers dressed up as trees. These people are called bogies or spirits and live in dark places. There are several different groups including the Hastings Bogies and the Gay Bogies. Behind Jack there are groups of drummers and people carrying sponges soaked in green paint, which are used to dab the noses of spectators. The festival ends at Hastings Castle, where Jack is slain and the spirit of summer is released. 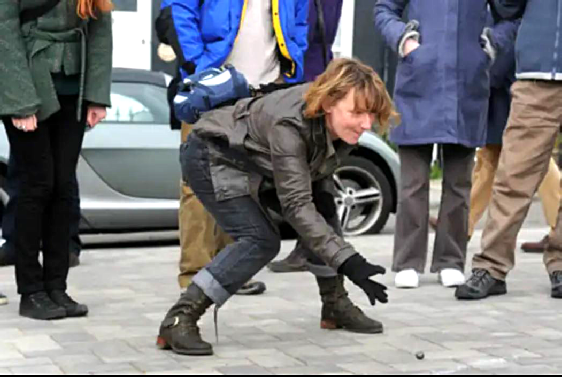 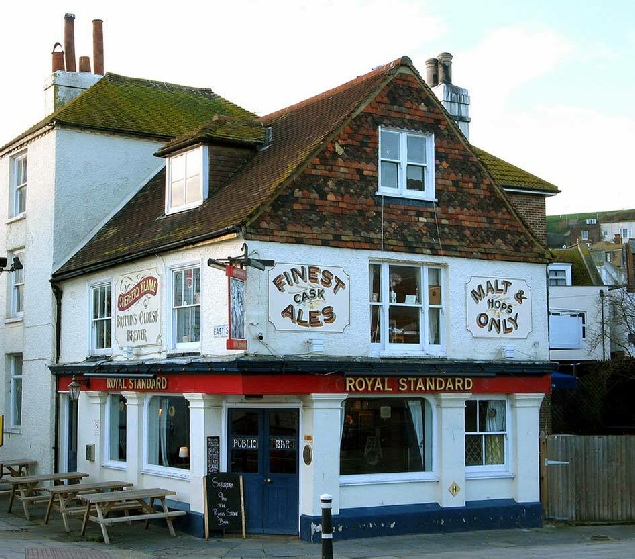 The Royal Standard is tied to the Shepherd Neame Brewery of Faversham. The brewery produces a beer exclusively for the festival. The 4.1% Jack in the Green Special is described as pale and golden with a clean, fruity taste. It is brewed with Maris Otter pale ale malt, sun-dried golden oats, gently kilned caramalt and pure local honey. Shepherd Neame brews only a dozen or so barrels for the festival, which are sold in the Royal Standard, Hastings Arms, Anchor, Ye Olde Pump House and the Stag. 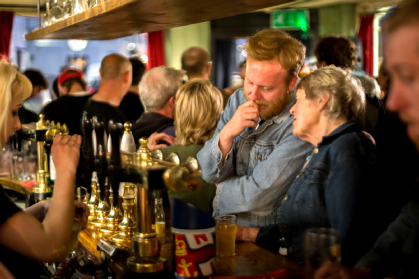 The Royal Standard and its sister pub, the London Trader, have a history of flooding by high tides. Flood marks are recorded on the front of the bar with dates of when the sea has come through the door. In 1967 a deluge of rain at high tide brought  floodwater three feet [91cm] high. Thirt-five stranded customers had to stand on the chairs and tables. More recently, in 2007, there was a flash flood about a foot deep [30cm]. With rising sea levels, watch this space.

The Royal Standard, on a pub sign, usually depicts the flag of Queen Victoria. The first pub sign shows the flag of King Harold, used in the Battle of Hastings in 1066 when he was defeated by William the Conqueror. Therefore, it was unique to Hastings. It was later replaced by the second sign. 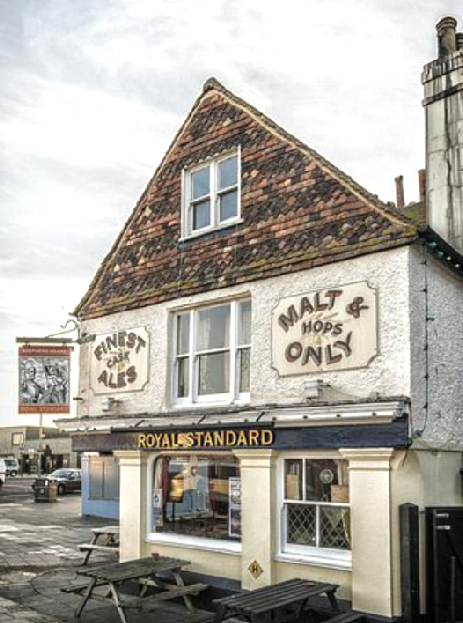 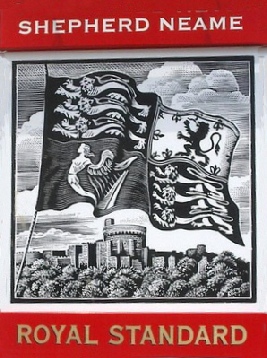 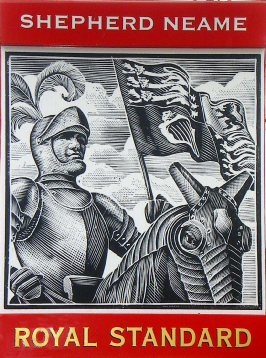 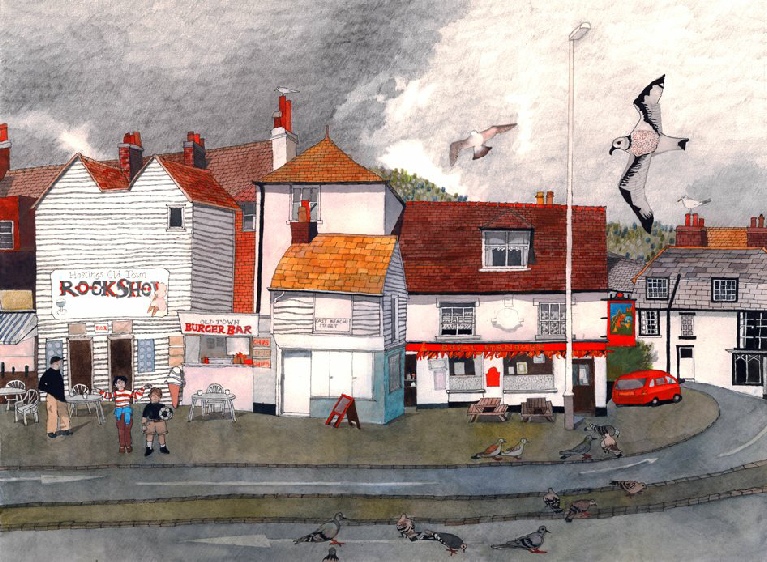 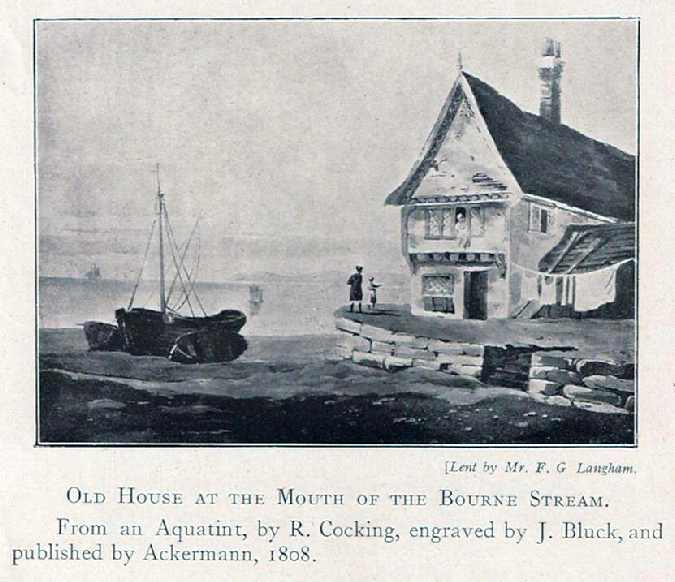