The North Star was built in the late 1860s by Joseph Wisden, a railwayman, previously a guard on the London, Brighton and South Coast Railway, since its opening inn the 1840s. He was granted a licence in 1870 but his time as landlord was not a smooth one. In 1877 he tried to sue the barmaid. Mary Jane Bell came to the North Star from Belfast, recruited by a local employment agency at £18 a year. But after a few months she wanted to leave because: “He has criticised everything I have done since I arrived”. Wisden sued her for the cost of her fare to England and other monies. He had apparently proposed marriage and bought her a hat but she had refused both. She must have been a popular barmaid, as several customers turned up in court to support her. The case went against the landlord and he lost. Mary Jane Bell was awarded two guineas [£2.10] and Wisden was hissed as he left the courtroom. As a result, the North Star lost a number of customers and a good barmaid.

In those early years the North Star was also a lodging house and in 1878 Wisden was charged for turning away two soldiers who had been posted to Hastings for training and who were seeking accommodation. The ‘billeting question’ was a grievance among local publicans, who were obliged to accommodate soldiers and their horses at the ‘soldier’s allowance’, a low rate of 4d [1½p] a night. He was represented in court by Hewett’s Brewery of St Leonards who said the pub was being altered and regretted the landlord had not found them alternative accommodation, but he was still fined 40s [£2].

A few years later a letter to the Hastings and St Leonards Observer,  signed ‘Bohemian Ratepayer’, complained of the ‘hawkers and others of the pikey fraternity who congregate around the North Star Inn and the fair that takes place here with a general turmoil of rough music, roundabouts, shooting galleries, coconut throwing, brawling and shouting by a lot of worthless vagabonds’. (‘Pikey’ is a derogatory 19th century slang term for gypsy or traveller that is thought to have derived from the word turnpike. It is still in use today.)

In the 1870s and 1880s the North Star was the headquarters of the Bohemia Bonfire Boys, one of four principal bonfire societies in Hastings. The Bohemia society was founded in about 1860 and on the 5th of November each year they marched around Bohemia and then into town to join the main procession, before returning to Bohemia to burn the guy. The processions started at the North Star and everyone wore fancy costume dressed up as navy, army, police, highwaymen, crusaders, clowns and demons. They were led by a brass band and the merriment went on until midnight. At the end of the century the tradition for bonfire faded. When it resurfaced after the Second World War, it did so at the Wishing Tree, Hollington.

A century later, in the 1970s, a band led a group of North Star regulars on a funeral procession and wake around Bohemia, for charity. ‘A fine quality coffin made from best plywood appeared, a body was organised and the procession then, with suitably dressed pallbearers, proceeded from pub to pub around Bohemia. One snag was that the body, dressed as Dracula, kept sitting up to see where he was going. The whole cortege was preceded by a fine band of instrumentalists. On returning to the North Star the wake continued. At its end one mourner was so overcome with grief and sustenance that he found it impossible to walk home, so he was placed in the coffin and carried shoulder high along Bohemia, through Silverhill and down Battle Road to his home. On arrival, the coffin with body in it was stood upright at his front door, the knocker knocked, and when his wife opened the door the body slid out of the coffin and lay prostrate on the passage floor. Her comments are not printable.’

In 1991 Watney’s sued the landlord for non-payment of rent, a massive £17,000 a year and claimed he occupied the pub as a trespasser.

In 1996 the North Star closed for two months for refurbishment and reopened as a free house. Divisions between the bars were removed to create one bar. 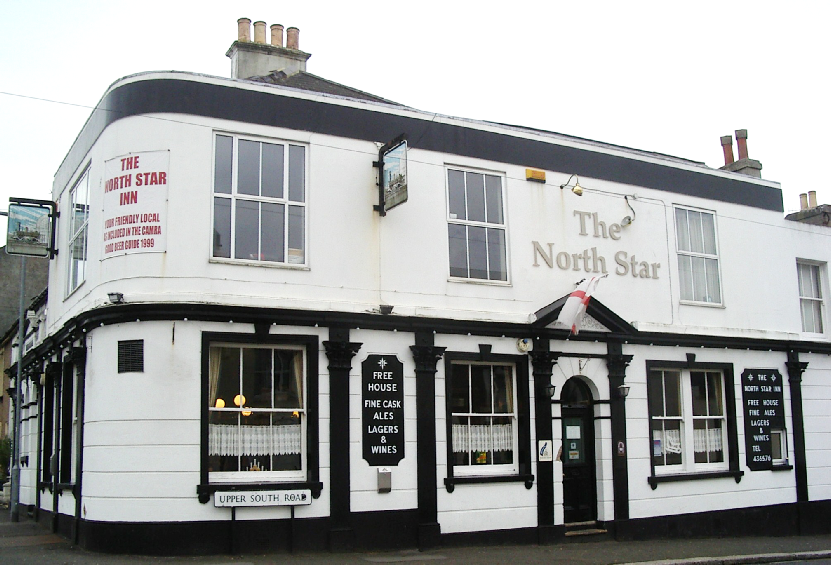 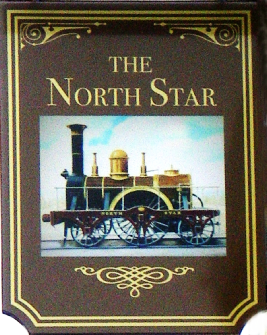 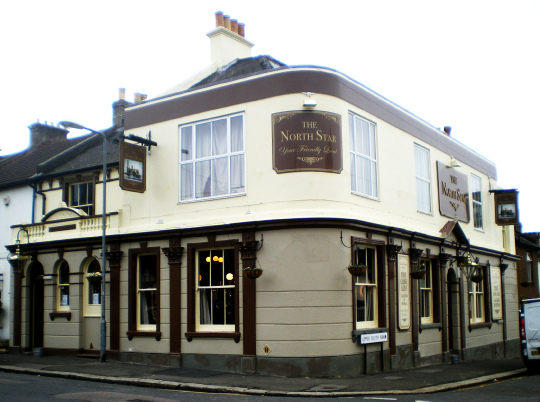 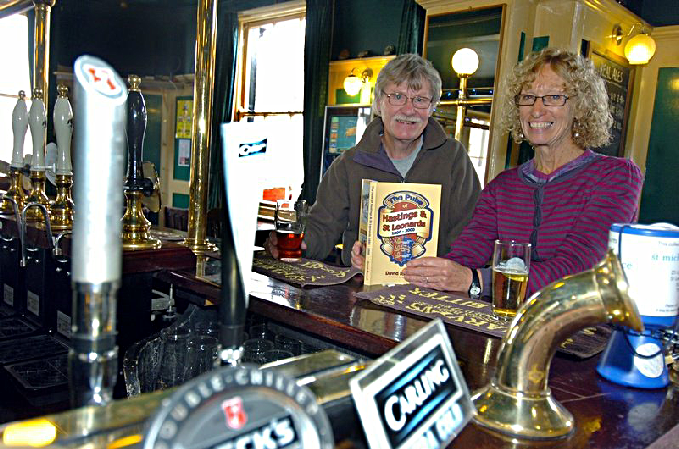 The author and editor with the first edition of The Pubs of Hastings & St Leonards in the North Star bar. Photo by Hastings Observer 2009 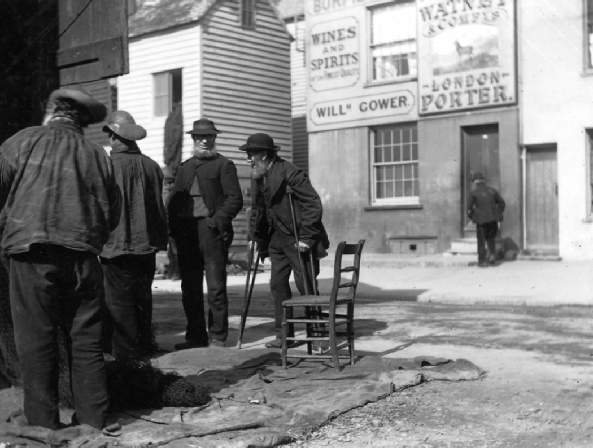 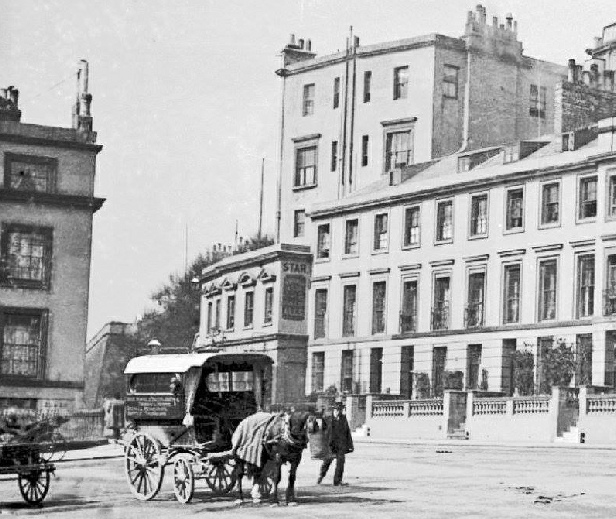 Star in the West, Undercliffe, St Leonards,
open from 1855 to 1943 when it was bombed in the Second World War

The North Star or Pole Star, is the brightest star in its constellation. It is very close to the North Pole and remains fixed in the sky where it marks the position north and the North Pole around which the sky revolves. Its origins are found in Greek mythology.

In the 1990s the pub sign showed only the name North Star under the ubiquitous Watneys Red Barrel. It was replaced with a new sign depicting the North Star. No, not the famous star in the sky but an early steam locomotive of the same name built by George Stephenson for the Great Western Railway in the 1830s. The first landlord’s experience and history on the railway influenced the name of the new pub. The North Star shown on today’s sign is the famous steam engine of that time.

Greek legend, heavenly guide, steam locomotive and pub. There’s more to a name than we think! 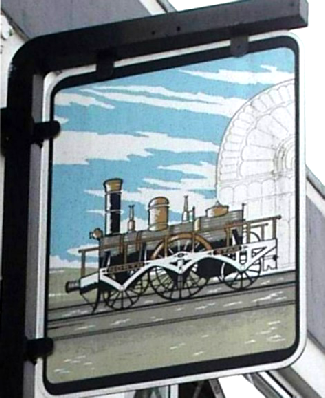